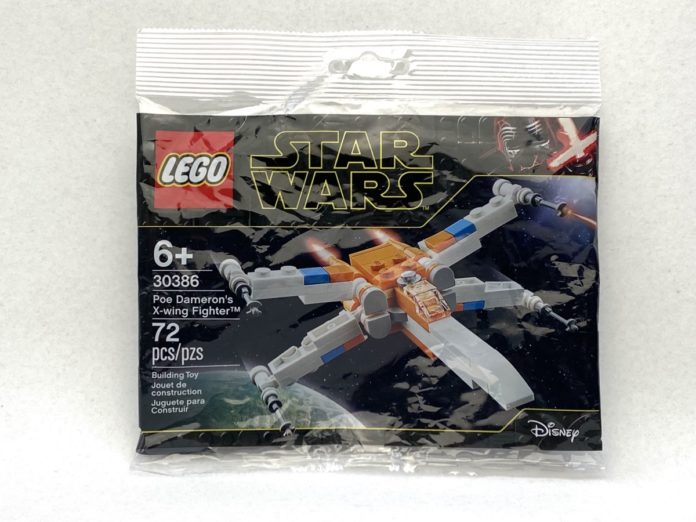 Kicking off this week is 30386 Poe Dameron’s X-wing Fighter. Would it surprise you that I had to Google “Poe’s orange x-wing” to figure out which movie it came from? Turns out he piloted this orange X-wing in the worst Star Wars move ever made, Episode IX: The Rise of Skywalker. Even though the movie was bad we got some nice LEGO sets out of it I guess. 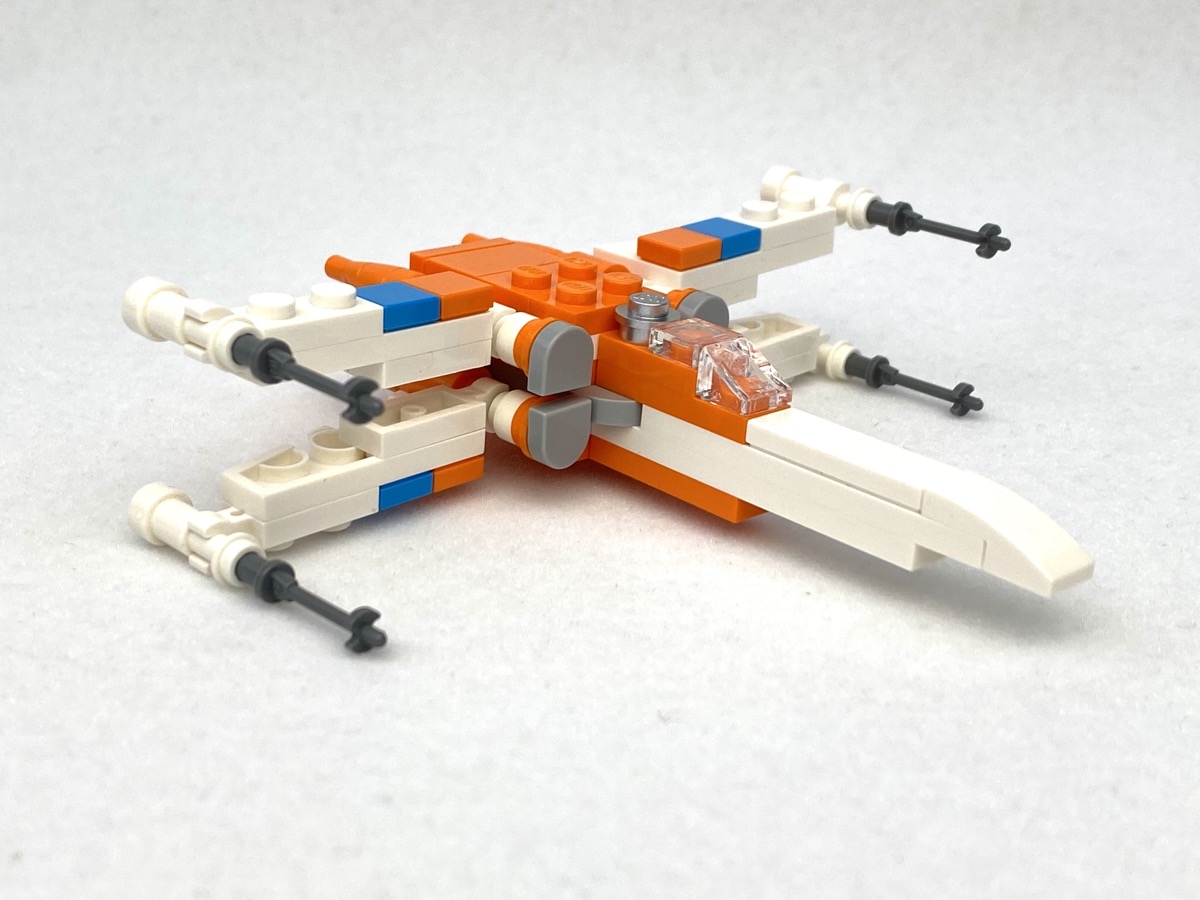 Even though it’s a polybag, there really isn’t much of a difference between it and an Advent calendar build. The basic construction approaches are the same: you build a central hub where you can clip wings onto it, and then attach the main fuselage. The higher piece count just offers a higher resolution. 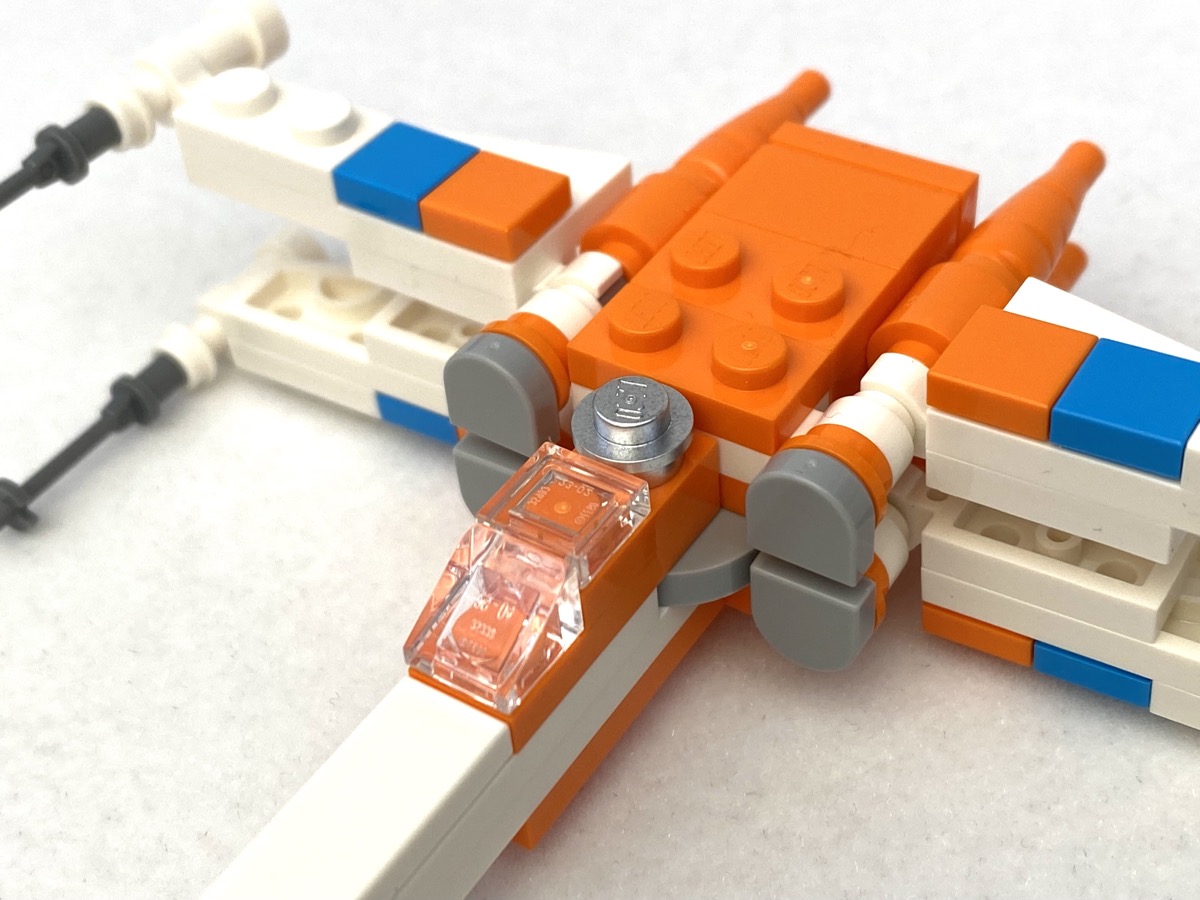 The fuselage is as plain as they can be: just a series of plates and tiles and slopes. Some clear elements outline the cockpit and a metallic 1×1 round denotes the droid which I’m fairly certain was BB-8 but I really can’t be bothered to cue up that movie on Disney+ to find out. If it is BB-8, it’s weird that’s a metallic silver and not a white or orange round. 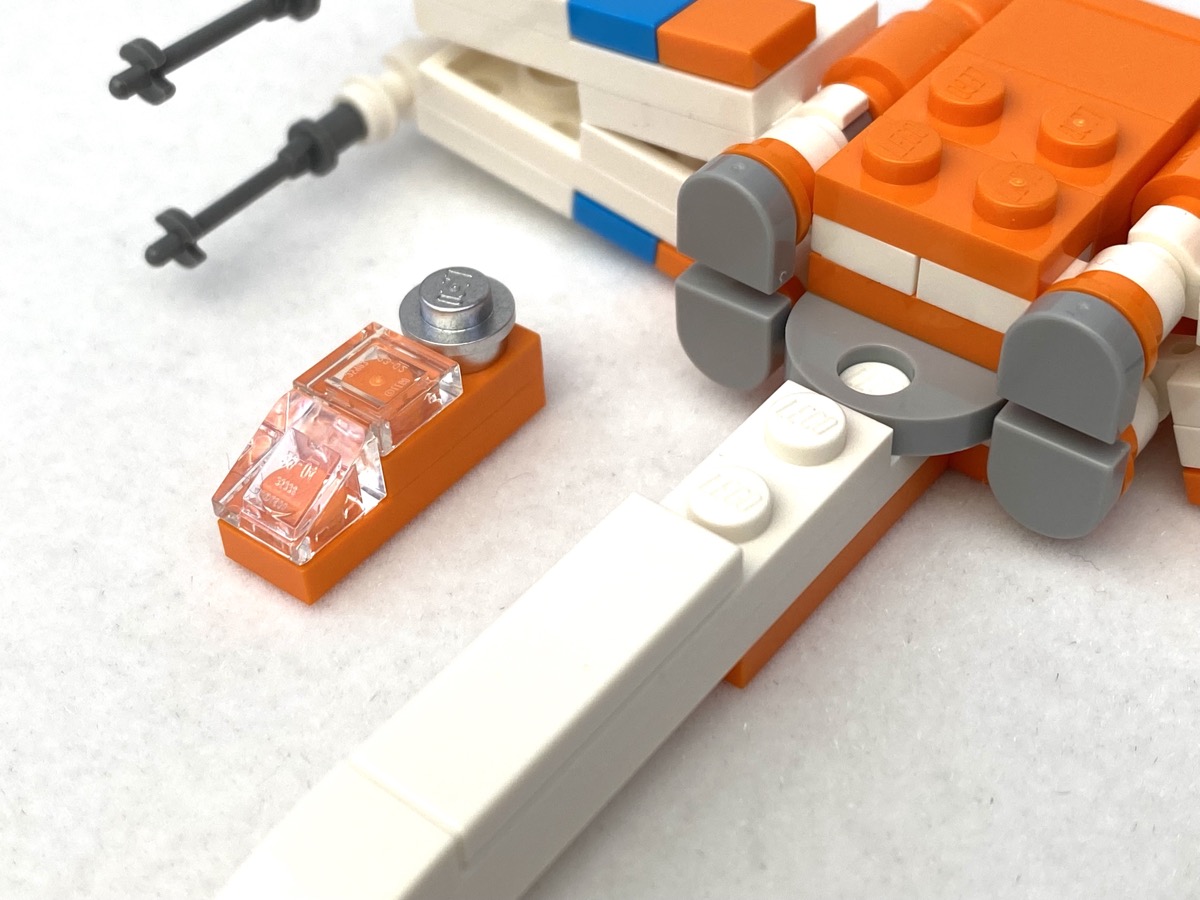 One thing I wanted to note about the fuselage is that it’s only connected by a single stud and then sandwiched on top by another plate to keep it place. Kind of a neat building technique to attach a 1-stud wide build to 2-stud wide element. 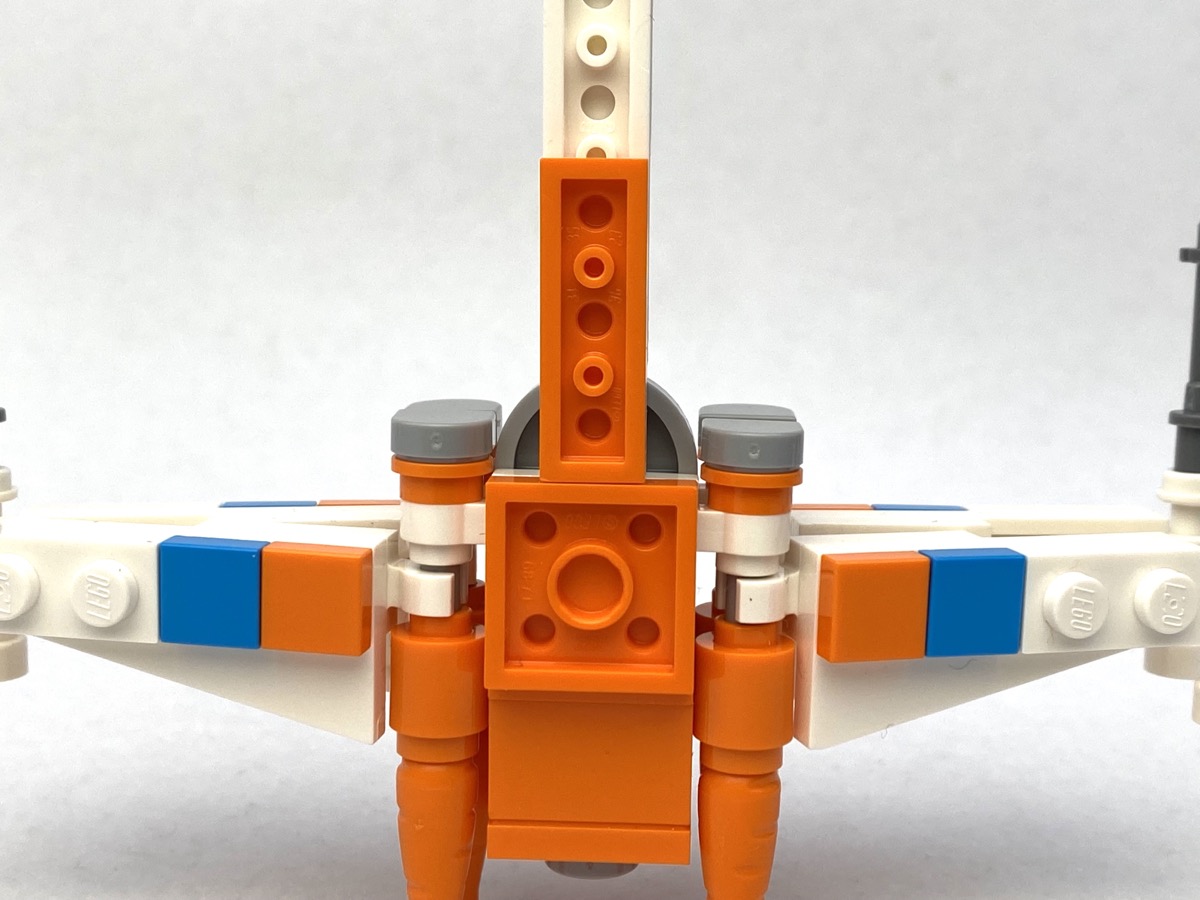 The main hull is a big boring block of orange, but like I said earlier, it’s only function is to provide connection points for the wings and the cockpit. 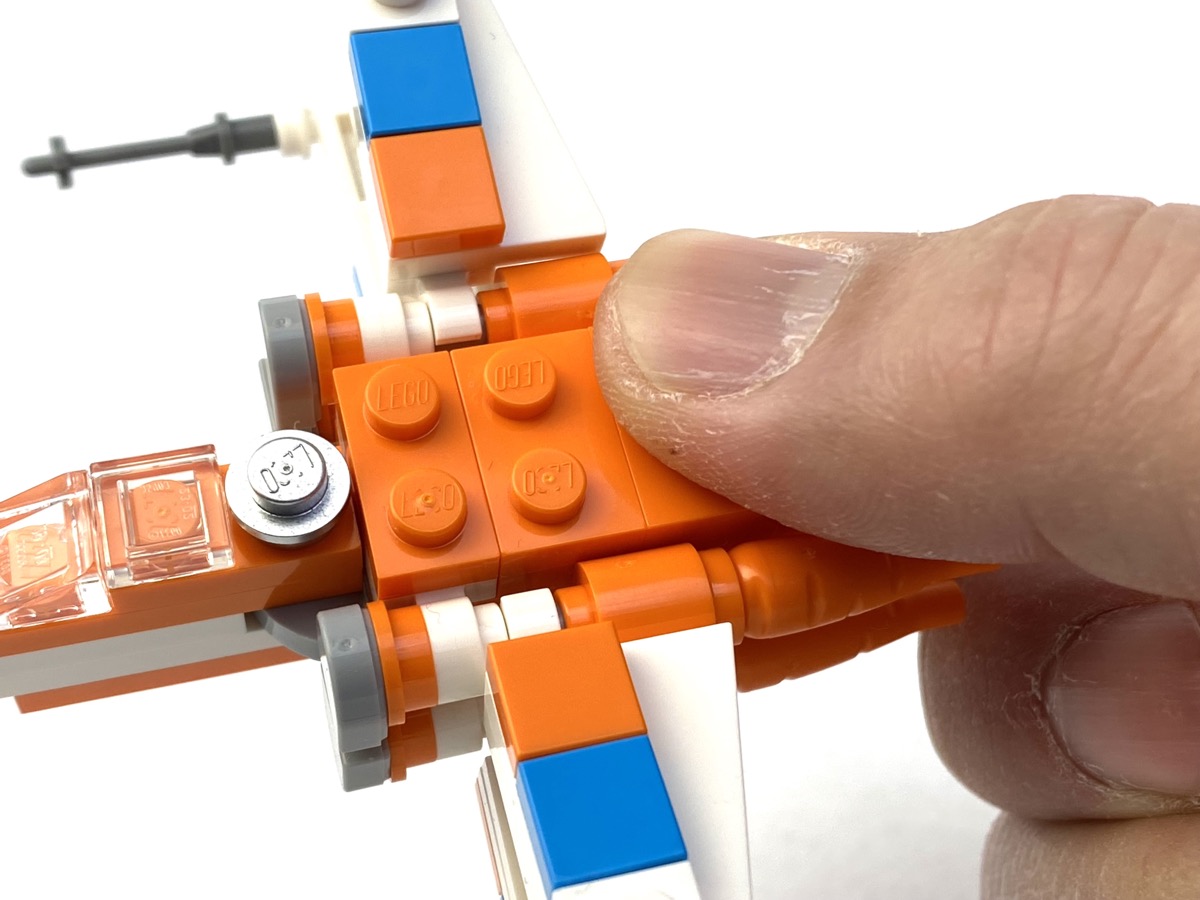 Well, it’s not the only function. I realized when taking these pictures that they actually provide a great finger grip for swooshing the set around. 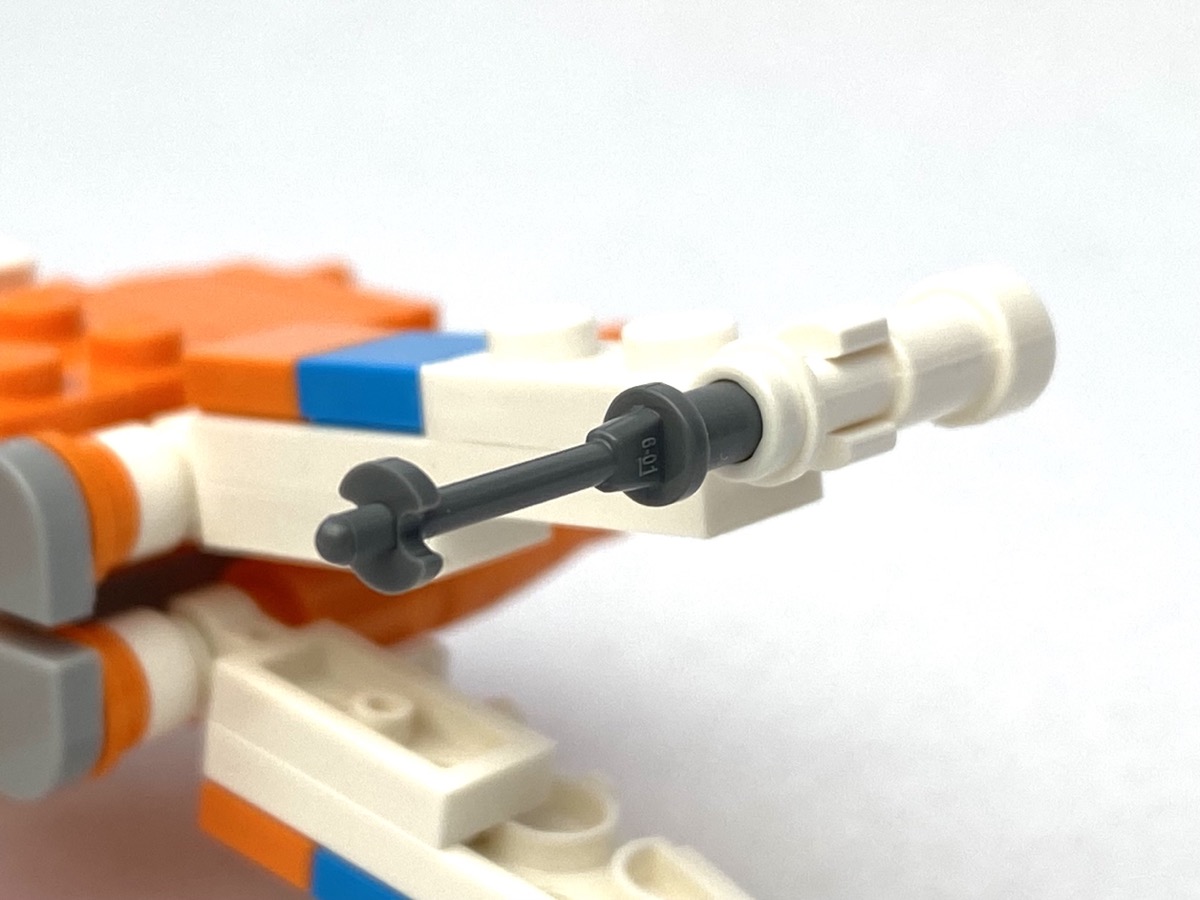 The wings, this is where the set really shines. You build two sets of mirrored wings with one set flipped upside down, so they are both studs-up and studs-down at the same time.  The laser cannons on each of the wing tips uses minifig ski poles and they are just chef’s kiss perfect! The baskets at end of the poles with its notches perfectly represent the flashback suppressors, something that LEGO has never been able to do in any set. The last UCS X-wing had a brick built-solution that came pretty close but it was clunky and blocky and rigid and ugly and left a lot to be desired. 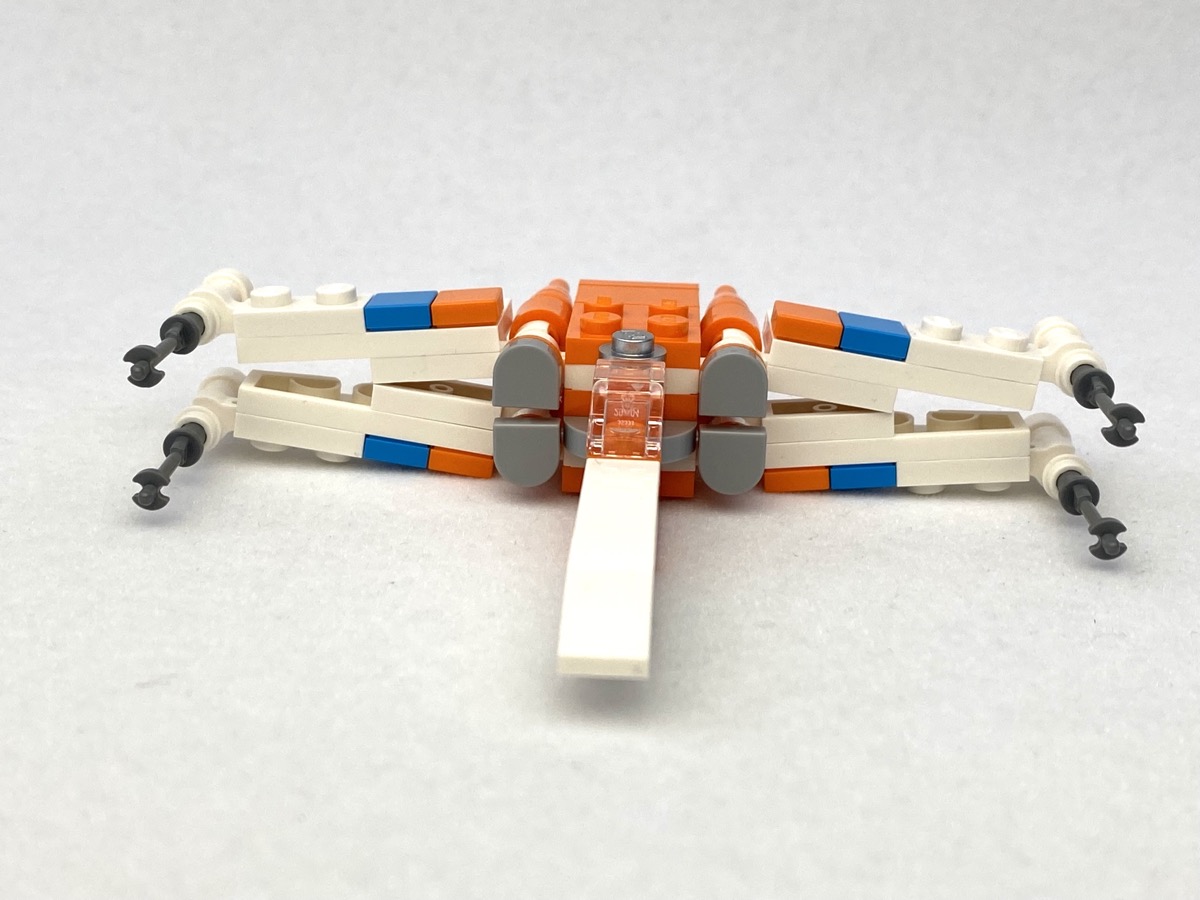 The split air intakes is probably one of the most noticeable changes between the OT X-wing design and the ST one. Instead of four individual intakes of the OT design, the new version has what looks like two intakes that split in half when the wings are engaged in combat. Thanks to weird pieces that probably came from the DOTS line, LEGO was able to recreate this split intake with four tooth tiles. I call them tooth tiles because that’s what they remind me but they are officially called “round 1×1 half circle extended tiles”. I do wish they wings were constructed to lie flush against each other a bit better because when they are closed they just look ugly. 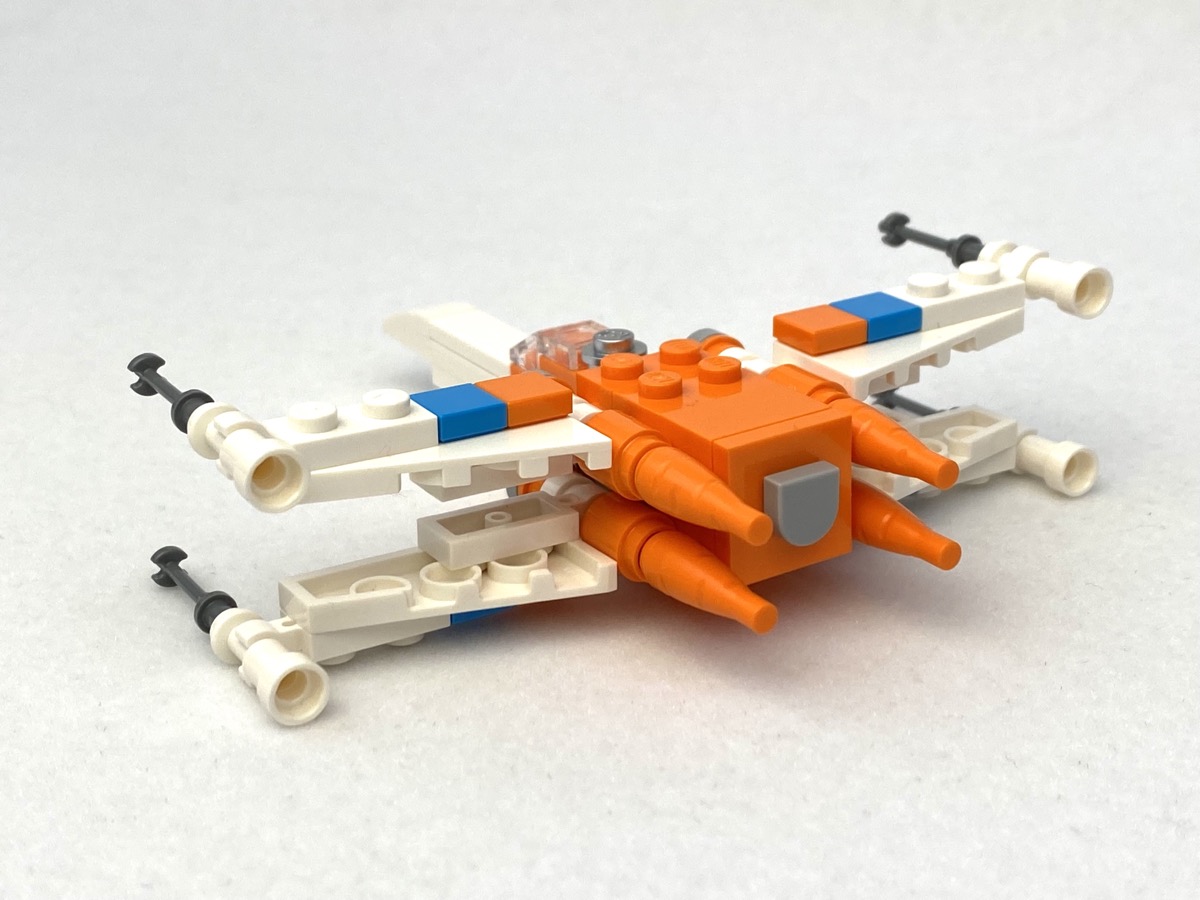 The wings clip onto the bar that is inserted through a set of modified plates that are capped at the end with orange carrots. I’m not a fan of the carrots because of their texture but I will admit they do their job pretty well as the ship’s thrusters, almost as well as the ski poles for the laser cannons.

This set rocks! I have a few minor quibbles about the overall construction of this set, but honestly, those ski poles won me over. When it comes to mini builds, lots of elements get repurposed from being one thing to represent an entirely new thing altogether and few work as magically as the ski poles. If you include the carrots, 30386 Poe Dameron’s X-wing Fighter not only has one such magical thing but TWO.