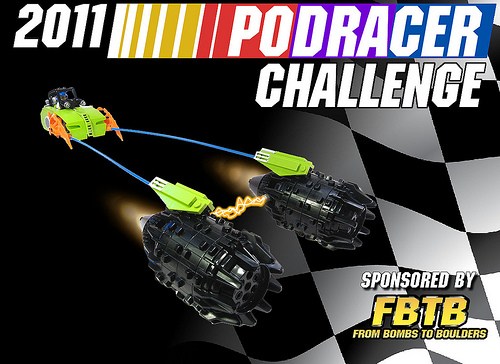 Greetings, programs! You might remember: our weeklong poll ended dramatically with a 3-way tie for the 24th spot in the race. After giving our brave pilots (and their podracers!) some cooldown time, we’re ready for the main event: the podrace itself!

The Race is a 3-Lap video broadcast of those 26 racers each getting a turn to roll a die, which has blue sides and red sides. Red sides are bad events, blue are good. You roll blue, you draw a card from the Good Event pile; red from the Bad Event pile. These events will consist of some action and a point modifier, for example: “dodge a stalagmite. Well played. +5 pts” or “you failed to dodge that stalagmite. Joker laughs. -5 pts.” Your points at the start of the race equal the number of votes you got in the poll. Points will be modified as each event dictates during the course of each lap and will change the positions of those 26 racers, and after all 26 have had an event drawn, the lap is over and the lowest 14 will be axed from the race. Lap 2 will feature the remaining 12 racers rolling the die again, and Lap 3 will be the final 6 racers battling it out in the same process. The racer with the most points at the end of Lap 3 is the Race Winner.

I’m estimating this whole race will take between 45 minutes and an hour. For those who can’t be there live, we’ll be posting the video on the site afterwards.

Hope to see you tomorrow!