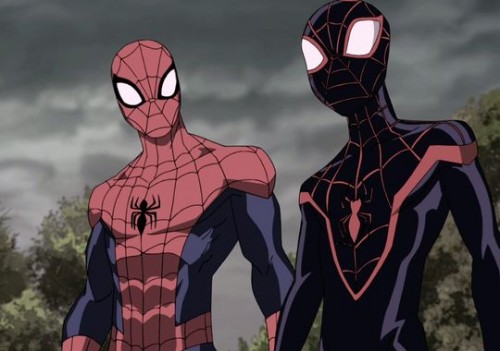 Full disclosure, big Spider-Man fan here. No newsflash to be sure, but if you’ve read my reviews of the Ultimate Spider-Man LEGO sets, you know the biggest problem I have is the fact that it’s the same Spider-Man minifigure in every set.

Spidey is one of those characters that has so many outfits in his closet that Marvel loves exploiting any opportunity to take them out and strut them around. We see this over and over in toy lines, big events like the upcoming Spider-verse that boasts Every Spider-Man EVER and in the destined to be mostly terrible new season of the Ultimate Spider-Man cartoon, Web Warriors (Prove me wrong, guys… please).

The first season of the show didn’t even make it a half dozen episodes before they had introduced a couple of the fan favourite costumes in the form of the black suit and the Iron Spider. None of this variety has trickled into the sets as of yet. Not even a battle damaged Spider-Man, which would at least be something. 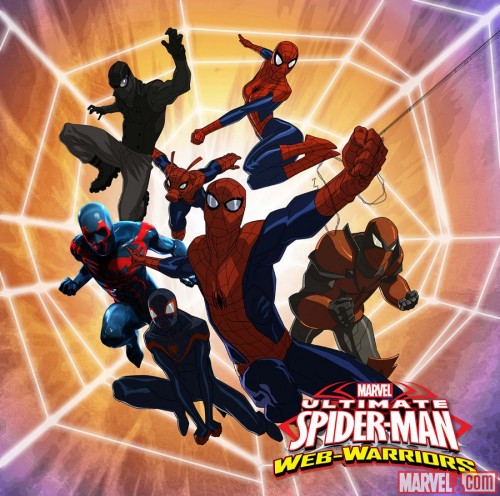 As much as alternate costumes would be great, this upcoming third season goes even further and will feature alternate versions of Spider-men and women. The picture above features Spider-Man Noir, a version of Spider-Girl named Petra Parker, The Spectacular Spider-Ham, Amadeus Cho as the shows new Iron Spider and my personal favourite, Spider-Man 2099 Miguel O’Hara. With all the problems the Ultimate Spider-Man show has, diversity isn’t really one of them. The claim could be made that, like the films, Marvel still has a distance to go to close those gaps, but the intent is clear and the attempt is being made.

This line up offers a huge opportunity for LEGO to add even more diversity and why not start with Miles Morales? Donald Glover’s push to be cast as Spider-Man in the current film reboot helped inspire the Ultimate’s comic creators to develop the character and now he’s getting the chance to voice Miles in the show. Doesn’t he deserve a little LEGO love too? Spider-Man 2099 is my favourite webslinger, but I think Miles should be next in line. He’s popular in the books, getting a shot on the show and his creators are even considering working him into the new movies somehow. I’m publicly no fan of the Ultimate universe, but after reading the crossover Spider-Men, I like this kid and look forward to whatever they have planned for him in the 616.

Marvel may be the line that is the most diverse (I haven’t crunched the numbers, but Nick should be able to confirm or deny) in its minifig selection of characters and part of that is the pool they have to draw from, but as his Girl Problem article mentions, there is still a long way to go on the fem fig side at the very least. So, here’s the gauntlet, LEGO: Marvel is making a distinct effort to be more diverse and inclusive. Follow suit.