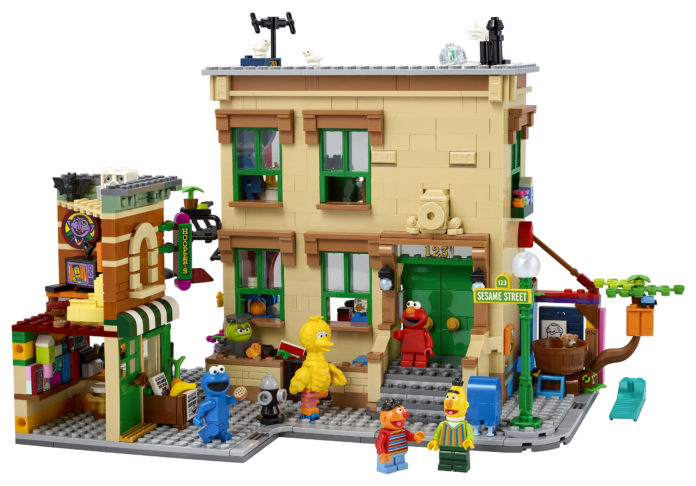 Sesame Street is effectively part of our family at this point. I grew up in the era when Big Bird was a big enough draw to get a theatrical movie release. I watched the show all the time, I have the books (not a typo… my wife and I still have books that we read to our kids). I grew up on this, and my kids are growing up on it too. My sonÂ loves Sesame Street, knows the names of all of the characters, and has us read the books to him multiple times a day. My daughter has had two different Sesame Street-themed birthday parties, and when she was younger and broke her arm, her answer to the doctor when told she could pick the color of her cast was “Red like Elmo!” 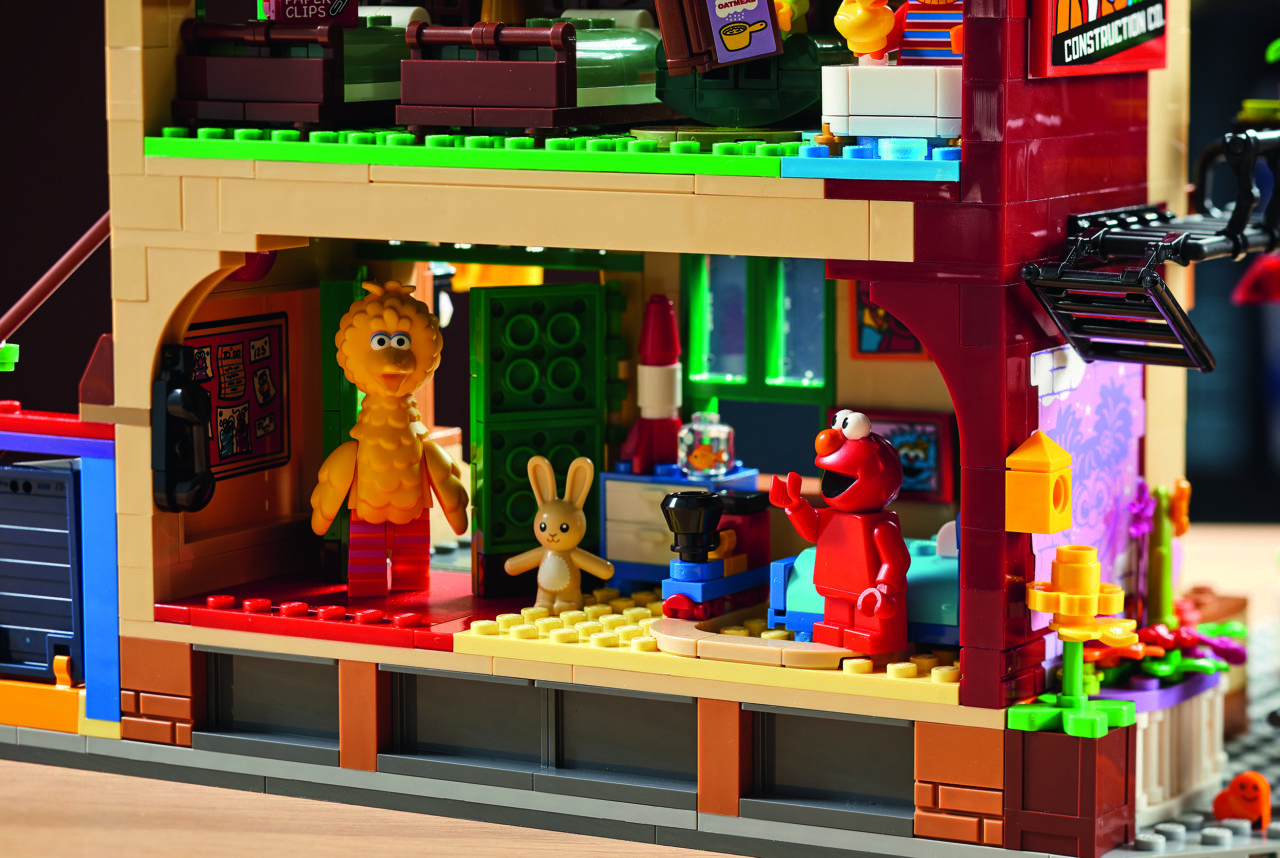 So I was pretty thrilled to see them getting a LEGO release through Ideas… Sesame street is a critical show that teaches great values to kids, often kids who are being underserved by our system and culture. It’s not just within the US – the show is broadcast worldwide in 140 countries or so, with touring productions (been to one of those too) and media that serves a singular purpose: to entertain and educate kids. Of course, the set is “targeted” towards 18+, so it’s banking on getting some adult nostalgia, but it’s hard to look at it and not think it’s perfect for kids. 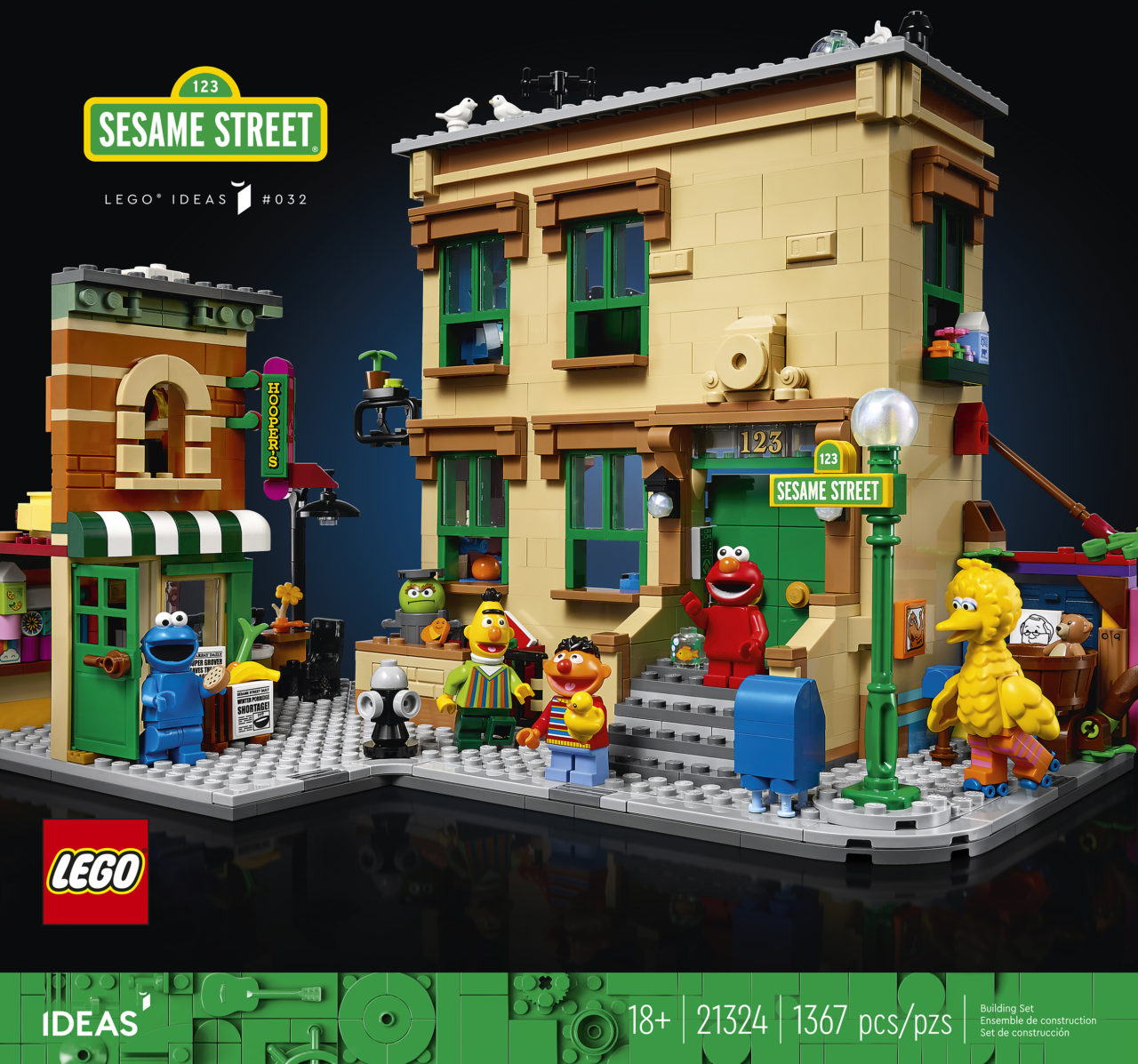 The set itself is the iconic main building of the Sesame Street neighborhood – the two-story brownstone apartment with the central stoop that’s featured apartments for Earnie and Bert (in the basement) and the human residents in other spots. We also get part of Hooper’s store, Big Bird’s nest, and sidewalk that connects them all together. I would have loved to see more to Hooper’s store built up, especially given the $120 price tag, but ti still comes in at a respectable 1367 pieces and does have a lot of important elements, like the nest and the light post.

Of course, Sesame Street is about characters, so the minifigure lineup has to represent the street as well… and it sort of does. There’s Elmo, of course, as the most overwhelmingly popular character for kids, who comes with his fish Dorothy. We get Oscar in his can, which is a very unique solution to putting him in the can… he also comes with Slimey, even though it’s not in this picture. We get the classic duo of Ernie and Burt, with Rubber Duckie and Bernice, and Cookie Monster has a cookie. The teddy bear is Radar, who belongs to Big Bird.

Sadly… I didn’t have to look any of that stuff up. 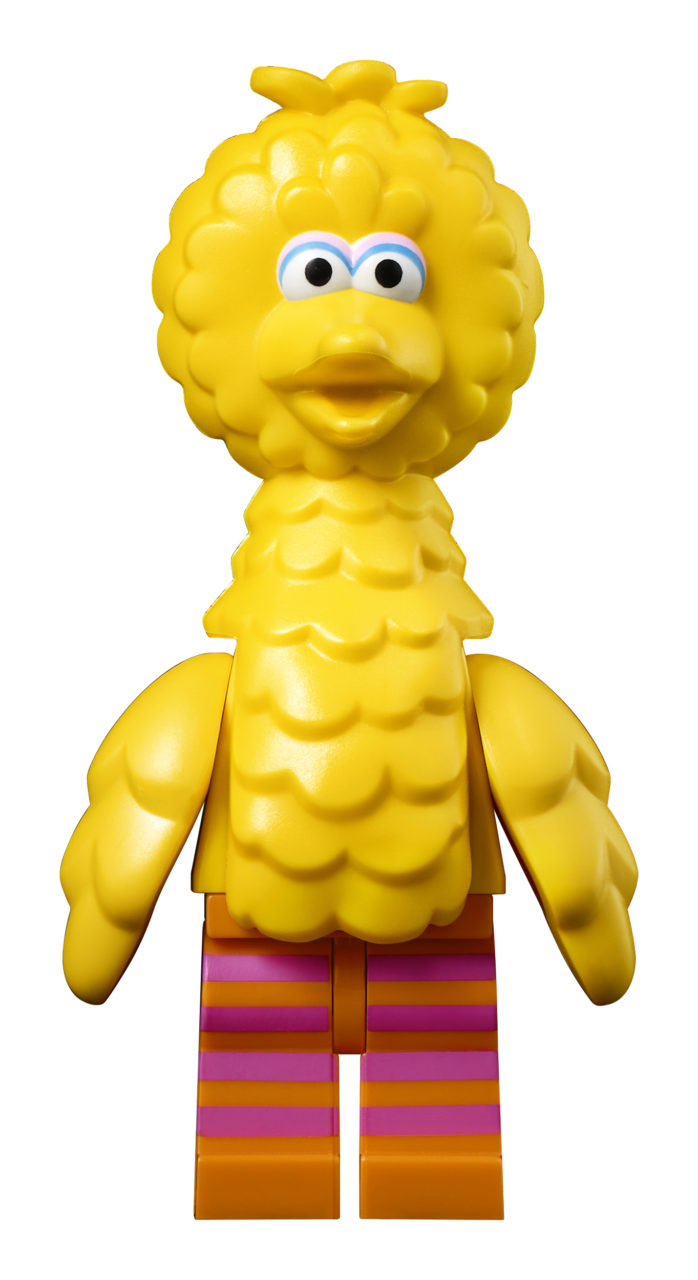 Big Bird is also in the set, of course, with his own unique sculpt and look. I wish he was a bit bigger, or had longer legs, but I still like that he’s clearly larger than the rest. Big Bird is still a central character on the show, even though he’s no longer the main focus. His friend Snuffleupagus isn’t here (and hasn’t been imaginary for some time, if you haven’t kept up on the Sesame Street Cinematic Universe). 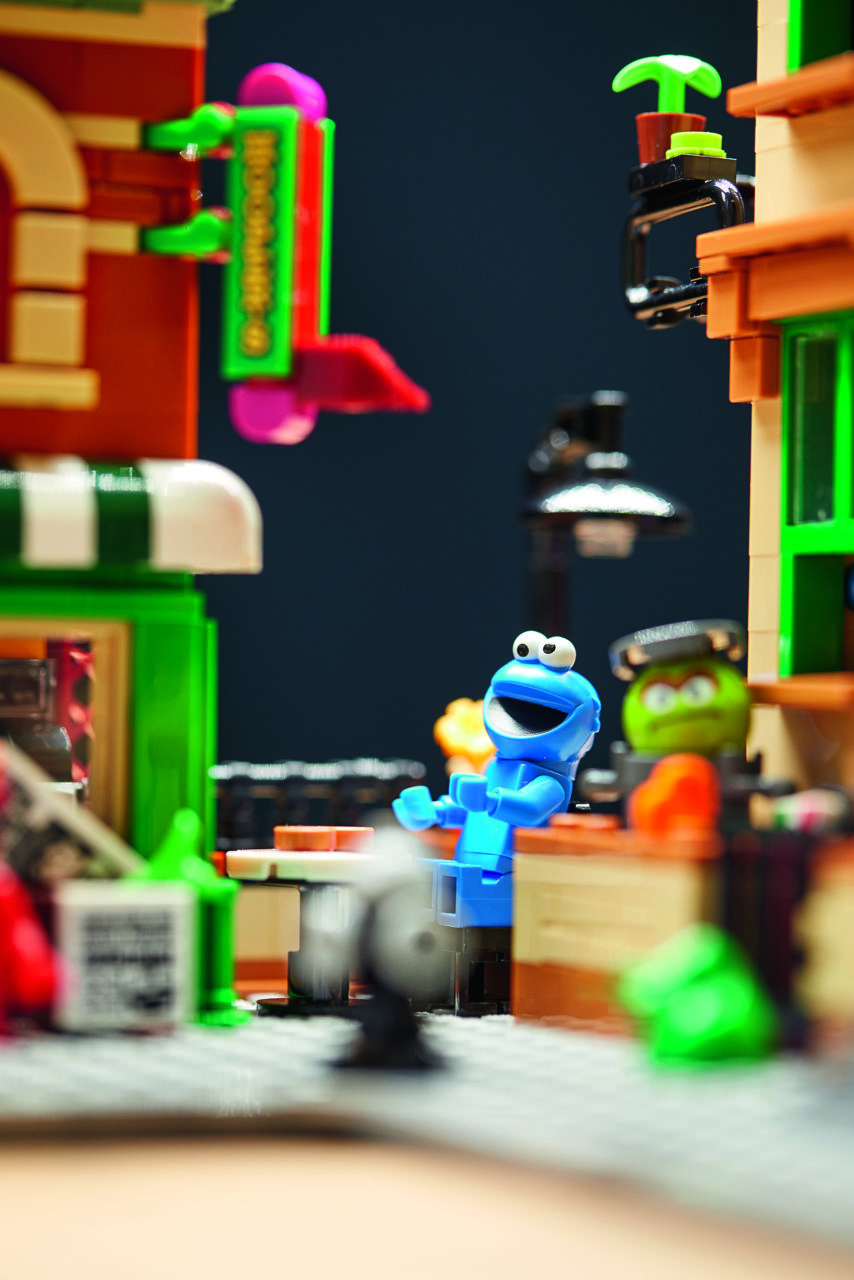 The real issue with the set, which has been there since these images started leaking, is whatÂ isn’t in the set. First of all… no female characters, like Abby Cadabby, Rosita, or Zoe – or even older ones like Prairie Dawn. All are newer monsters, but still popular for kids. Beyond that, classic characters like Count von Count and Grover are missing. We also don’t get any of the human residents of Sesame Street, either, who are a core part of the show and what it’s there to teach.

All of those are a concern, given that, traditionally, Ideas has been a one-and-done release. Ghostbusters was an obvious exception, but it managed to get the core characters into the set. That being said, LEGO’s press release does give us a bit of hope..

This is the first time Sesame Street characters will be in LEGO minifigure form and the iconic set will be available starting November 1 on LEGO.com and LEGO stores nationwide.

Maybe it’s a stretch, we’ll find out in the future, but it’s hard to imagine Sesame Street without Grover or Count, and for most kids, to see it without Abby, Rosita, Zoe, Baby Bear, or Julia. It’d even be a chance to bring out some old favorites that have moved to the background, like Harry Monster, so here’s hoping. Maybe there’s a CMF line in the future, or further things to add, like the playground, Elmo’s place, or some of the other locations. 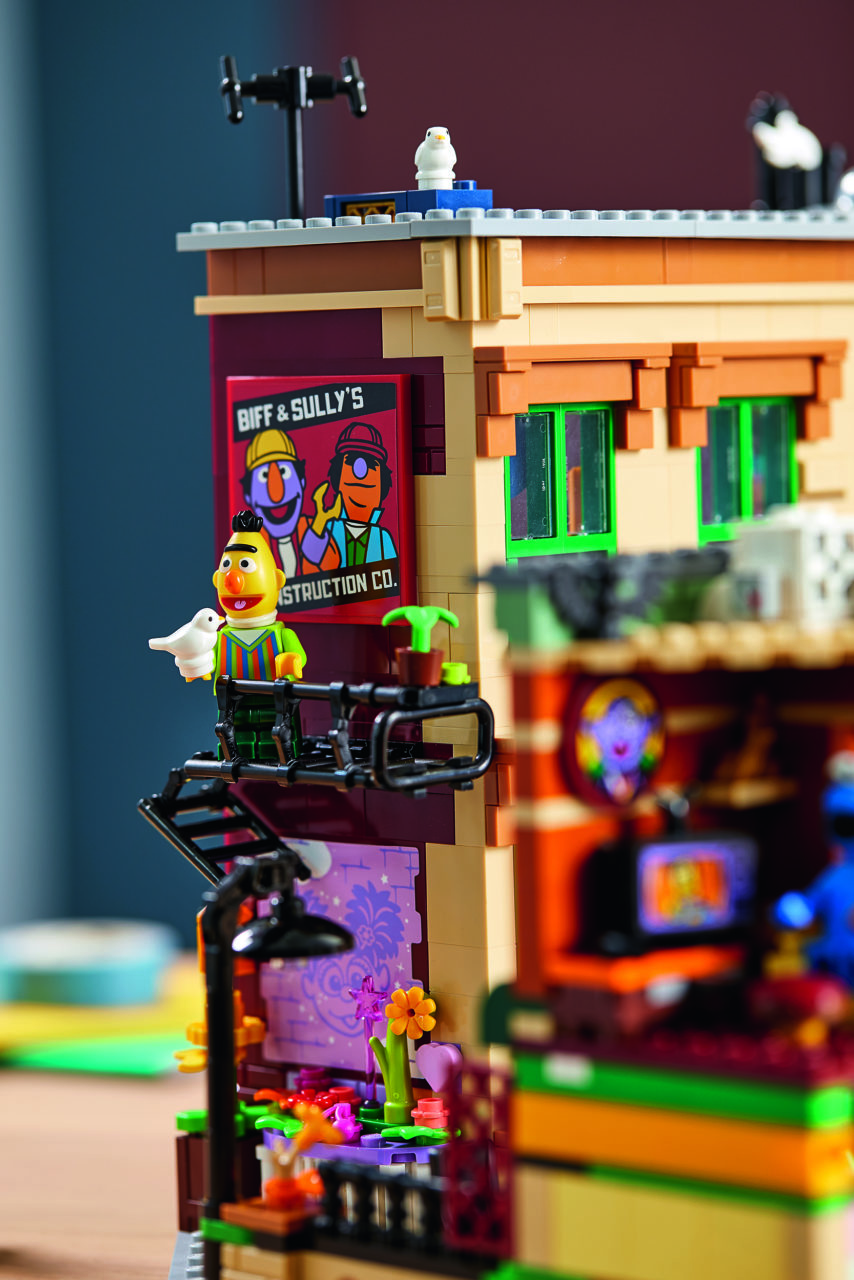 As a set, it looks like it’s absolutely packed with little easter eggs, the kind that a show that’s been running forÂ 51 years can do. Some of the characters I mentioned are on stickers or tiles… like Abby getting her little fairy spot and wand, Count and Rosita showing up on pictures, and bits like that. There are some deep cuts in there, which are reflected on the real set, like Big Bird’s drawing of Mr. Hooper that’s been in the nest since the early 1980s – in one of the show’s more “infamous” and heartbreaking episodes. 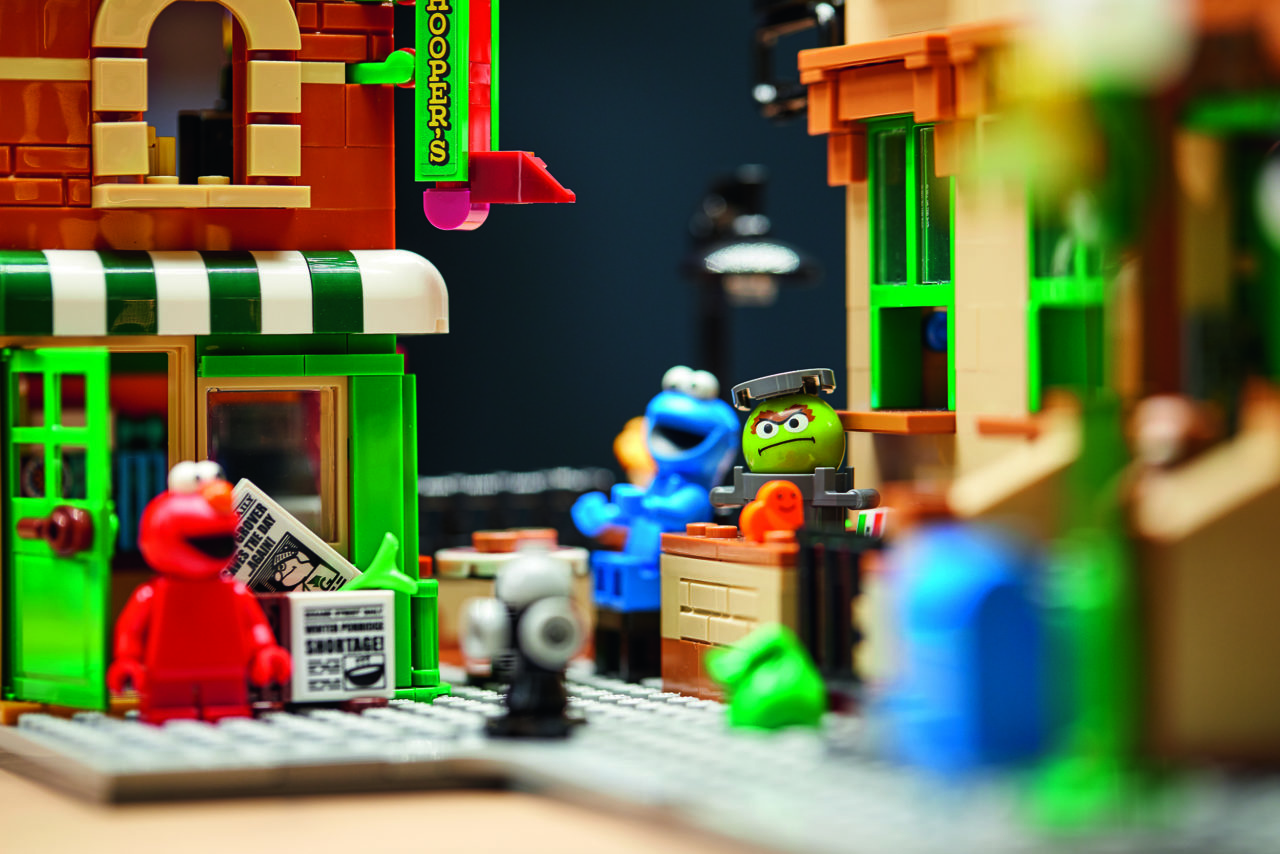 More pictures of the set, and the full press release, are below. The set will be available November 1st from LEGO.com and in LEGO Stores. 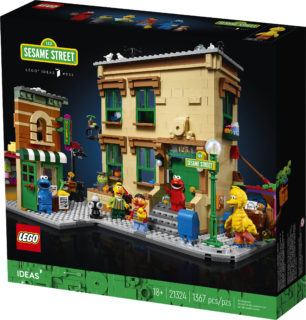 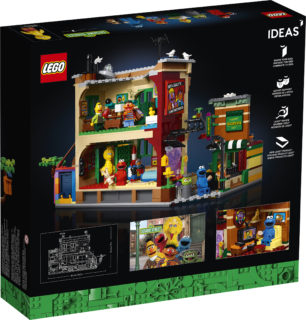 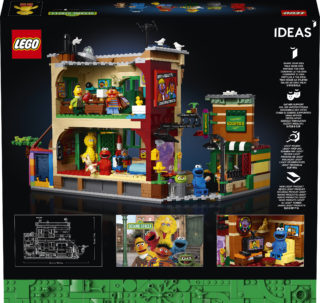 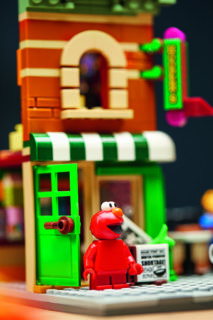 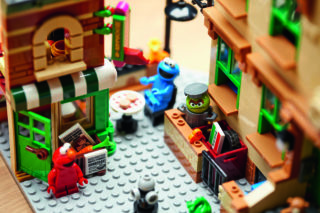 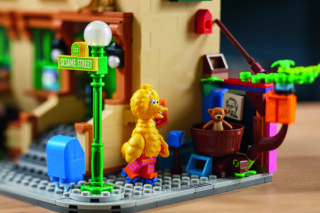 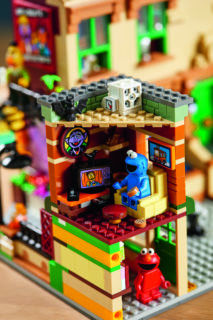 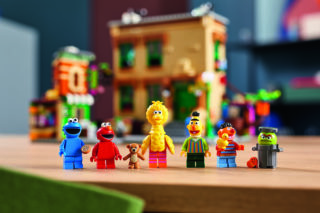 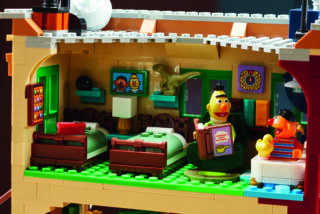 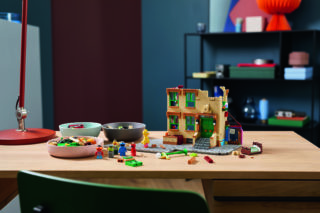 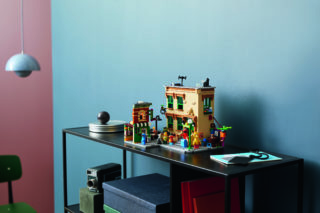 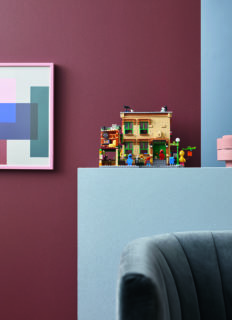 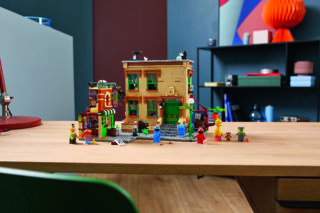 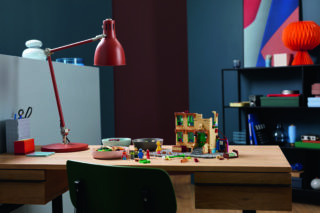 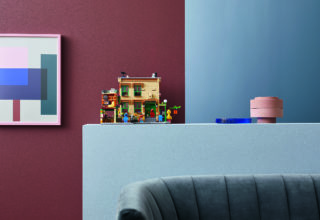 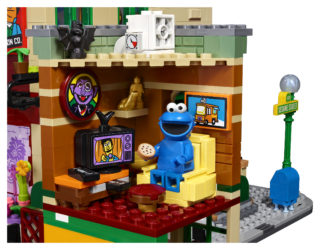 Billund, October 22, 2020: Voted for by LEGO brick lovers all over the world, a wonderfully nostalgic new LEGO Ideas set has been brought to life after being envisioned by an avid builder. The brand-new LEGOÂ® Ideas 123 Sesame Street set is the latest product from the LEGO Ideas collection, which conceptualises and produces the creative wonders imagined and voted for by LEGO brick fans themselves.

Created with all the delightful elements of 123 Sesame Street, the new set is packed with authentic details from the famous New York City neighbourhood. From Bert and Ernieâ€™s apartment, in which Bert famously pleaded with Ernie to remove a banana from his ear so he could hear better, to Big Birdâ€™s nest, where the grown-ups finally met Mr. Snuffleupagus in person – builders will marvel inÂ Sesame Streetâ€™sÂ most memorable moments.

As they embark on their immersive build journey of LEGOÂ® Ideas 123 Sesame Street, seasoned LEGO fans and younger builders alike can take a trip down memory lane, passing by Hooperâ€™s Store, Oscar the Grouchâ€™s trash can, and many more quintessentialÂ Sesame StreetÂ locations, making it the perfect set to enjoy on your own or together as a family. Fans can even bring their favourite characters and show moments to life with the brand new and exclusive buildable minifigures which have been moulded specifically for the set, including characters such as Cookie Monster, Elmo and Big Bird.

The new LEGO Ideas 123 Sesame Street set is part of the LEGO Ideas collection, which offers fans the opportunity to submit their own brick creations with the chance to have their concept brought to life with the help of LEGO master designers and a share of the profits. Other recent LEGO Ideas sets inspired by LEGO fans, include the LEGO Ideas Grand Piano and the LEGO Ideas Friends Central Perk.

Created byÂ Sesame StreetÂ fan and LEGO enthusiast Ivan Guerrero, this set brings together the magic of the iconic New York City street with the mindful and creative building experience of LEGO bricks to create an instant classic.

Speaking about the creative journey,Â Ivan Guerrero said: â€œAs a long-time fan of the LEGO Group andÂ Sesame Street, it has been a dream come true to be able to merge my two passions into a memorable set for fellow builders to enjoy. LEGO bricks andÂ Sesame StreetÂ shaped both my childhood and adult years, and the opportunity to work with the LEGO Ideas team to bring this quintessential New York street to life has been thrilling.â€

Federico Begher, VP of Global Marketing at The LEGO Group added: â€œWe were instantly drawn to Ivanâ€™s idea, as we had never created an official LEGO product withÂ Sesame StreetÂ before. It was clear from the submission that Ivan is passionate aboutÂ Sesame StreetÂ and he really brought it to life with the wide array of characters and bright, classic colours. For the first time in the history of LEGO Ideas, we also had the opportunity to create brand new minifigures for a set â€“ bringing something new and exciting to our LEGO fans.

Knowing the impactÂ Sesame StreetÂ has had on the world for decades, sharing similar values with generations past and present, this felt like an exciting way to blend novelty with nostalgia, and pay homage to the truly iconic 123 Sesame Street through LEGO Ideas.â€

The new LEGOÂ® Ideas 123 Sesame Street set is the latest example of how the LEGO Group aims to inspire builders of all ages to build, rebuild and get excited by the process of creation.

LEGOÂ® 123 Sesame Street will be available directly via LEGO.com and LEGO Stores from 1st November.