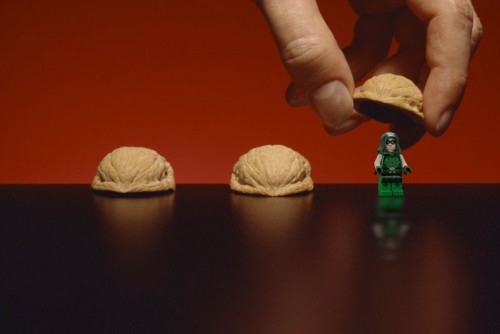 San Diego Comic Con has come and gone and it wasn’t without it’s drama. And by drama, I am referring to LEGO’s handling of the minifigure giveaway. After talking with several con goers, I am convinced that LEGO was selective on who they gave winning tickets to. Bottom line: the system was rigged.

Now, keep in mind I have only anecdotal evidence go by, but after the conversations I’ve had with many of the other attendees about the giveaway, because there isn’t much else to talk about when you’re waiting in line for hours for the same thing over the course of three days, a few things became clear. The most important of which was that there were definite patterns in how they were distributing tickets and which of those tickets were winners. Couple that with the information coming from independent sources and there is a strong case pointing to a rigged system. I’ve invited a few of the other attendees to email me with their observations and I’ll be publishing those emails in a series of posts over the next few days so you yourself can decide if there is credibility to the conspiracy theory. But before we get to any of that, it’s important to describe the method in which the tickets were distributed.

Thursday was a mess. Thursday was the day they were going to scan badges and give out tickets at their booth at 11:30, but that was a completely broken system. The crush of the crowd was too much, so much so that they didn’t bother with badge scanning, and then eventually had to call off the ticket distribution altogether and came up with a different method for Friday. If Friday’s plan worked, which it did, they would use it for the the rest of the days. So on Friday, Saturday, and Sunday, a line was formed upstairs, far away from the LEGO booth, far away from the convention floor. Ticket distribution was supposed to start at 11:30 but they would start earlier since the line was getting so long. I wish I had pictures of how ridiculous the line was so you can get an idea of what it was like, but alas, my brain was not in ‘reporting’ mode. When it came time to collect your ticket, you would wind your way through the line and receive a ticket given to you by one of two LEGO employees. And this is where they rig the system.

(By the way, if you have your own observations to share, I invite you to use the contact us form and get in touch or post your experience in the forum thread)

Dan has been attending Comic Con for several years and in his email broke down LEGO’s methodology since they started with exclusives way back when they had a Batman/Joker diorama. Here is an excerpt of what he wrote. I’ve edited out portions that were not relevant to the point of this article, but I’ll be reposting his email in its entirety in the linked forum thread if you’re interested in reading.

So after Thursdays craptastic attempt at giving away tix, they FINALLY learned their lesson and just moved the ticket giveaway upstairs. This turned into a pure dream as people were orderly, friendly and in one single line. The line was long, and I mean LONG…from the middle of the convention center at the sails pavilion down to the Marriot Marquis long. But the one beauty of the line was that it was extremely fast and fluid. No one was pushing, shoving, getting squished or anything of that nature that was experienced the day before. Just follow the line and pick up a ticket. There were two people with bags of tickets and tickets in their hand ready to give out to the people who walked through the line. But no one was scanning badges, so guess what happened. Yes, people would go through the line again. Granted the lines were long, so one would have to travel down the stairs to go again, but the line was also very fast, so it would only take a few mins to go through the line again. After announcing badge scans on Wednesday, that actually didn’t even happen til Sunday. The very last day. Nice job Lego team…last day? what a crock.

Now we get back to where this initially started – the Lego Giveaway was RIGGED!!!! You must think I’m joking or just some conspiracy theorist, but after the facts are shown, it’s very likely it was rigged. Which is a shame, but it’s probably true. How does one rig a drawing/raffle if tickets are handed out with #’s on them? Well, simple, they know the #’s BEFOREHAND. The number ranges that would be announced later in the day, were already known BEFORE the tix were distributed. The raffle winners were based on ranges, generally in chunks of 50. For example, 10,051-10,100 are winners. They would have 4-8 ranges of numbers based on what figure was assigned to that day.

So what do you do with a rigged drawing? Well, you give winners to anyone you want, primarily you give winners to kids. Lego loves kids and kids love Lego. Kids don’t resell figures on eBay. They play with them in their sets, swap body parts and get them dirty. So let’s target the winning tickets to kids. I wouldn’t have thought twice about this rigging if I didn’t see some fishiness w/ my own eyes. And believe you me, it was fishy. The ticket givers already had tickets in their hand ready to give out, when an adult walked by for his/her ticket, they were given a ticket out of the bag…even though they had tix ready to give out in their hands. As a child walked by, the ticket in his hand were given to the kids. Early on, they wouldn’t give out those tickets in their hand unless it was to a kid. Now this could only start off at the beginning of the giveaway as people would walk too quick to continue doing this the entire time as you gave out tickets. But that also doesn’t mean they could have the winners stashed away in their bag that’s in a different manner than most of the losing tickets too.

If you’re gonna do a raffle, make it a true raffle. Select the winning numbers AFTER the tickets are given out. Or allow them to grab a ticket out of the bag themselves. And the reason they didn’t allow that, well, people would grab multiple tix. If you saw the size of this ticket, good luck grabbing two without anyone noticing. These were like concert size tix. Not your normal Office Depot tickets.

I don’t think I would have thought twice about this fiasco if it wasn’t for the fact that the winning #’s were drawn well before the tix were given out. That just doesn’t make sense to why they would do that.

They might not have rigged it, and it could be my conspiracy theorist mind going nutso, but that’s how I see it. When I know about 40 or so people trying to win these figures. It just so happened that the people with kids won it more than the adults.