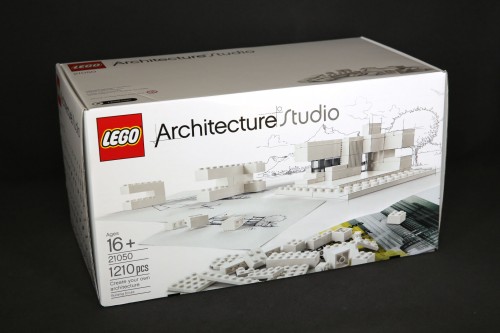 This set seemingly came out of nowhere. Either that or I haven’t been paying that much attention. Soon after I posted about the LEGO Architecture event at select Barnes & Noble stores and the mysterious exclusive set they were touting was it pointed out to me that the set was 21050 Studio. It’s exclusive to Barnes & Noble, so you can only buy it at BN stores and online right now until August 1 where it will be more widely available at Amazon

The event I attended was a low key affair, with at most 6-7 people including the lone store employee overseeing everything. There were copious amounts of white elements dumped into various cardboard containers and onto the table and visitors were invited to build anything their hearts desired. I built the following: 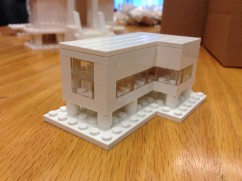 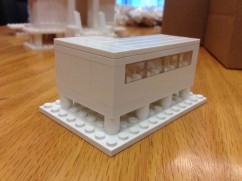 Allow me a moment to diverge off topic, but there was an obvious difference in the pureness of the white ABS in the elements. Some elements were warmer, tinged with a slight orange or pink hue, and some were more cooler, trending towards a bluish tint. The photo below is unretouched directly from my iPhone. You can see the difference in the white between the 6×6 and 8×8 plates along with the rest of the surrounding elements. 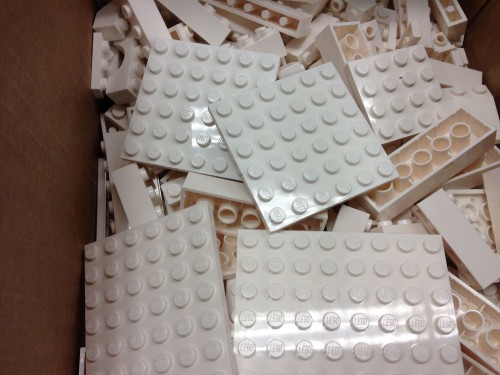 Quality control issues aside, the whole event was to drum up interest in 21050 Studio set, so I took the bait and took a set home. The cost was $149.95 for 1,210 pieces in a nice big box. I finally had some time tonight to crack it open and write up a review. Worth it?

Yes, worth it, for several reasons. But let me make one more comment about the quality control issue.

I ran into the same quality issues as I did at the pile of parts at the Barnes & Noble event. But it seemed a bit more severe with this set as color differences were found between elements of the same type where as at the store it was found between different elements. It could be the lighting in my living room, or my tired and dry eyes, but the first thing I noticed when dumping the parts out of the bags was that the white didn’t seem so pure. It may be worth a call to Shop@Home just to let them know of the issue so that they are aware. It could be a sign of a bigger problem assuming that someone other than me sees the same issue. 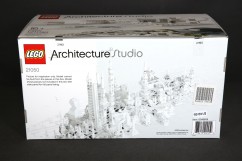 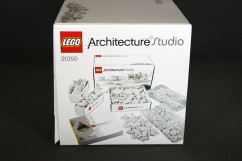 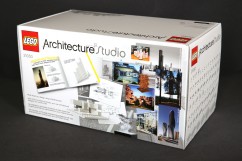 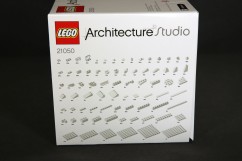 Anyways, moving on. The box is white, reflecting the monochromatic selection of bricks inside. Every panel has some sort of graphic, including the very bottom that shows some models built with LEGO but with a disclaimer stating that the models are for inspiration only and cannot be built with the pieces inside the box. Kind of a tease if you ask me. Why not showcase models that can be built with the bricks inside? It seems like a missed opportunity to show the potential of the $150 dollar set. 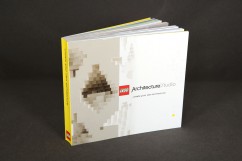 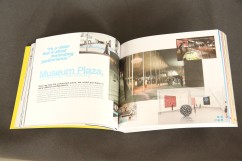 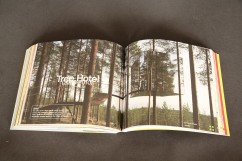 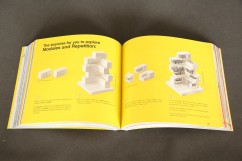 Inside the box, the set’s 1,210 pieces are split up into 15 bags. You also get a couple of sorting trays and a 272-page guidebook. The guidebook is thick and quite impressive. There is a MASSIVE amount of content. There are tons of tips on how to build architecturally with the set, covering concepts from scale to repetition to density and mass. You could easily spend hours just reading the guidebook and not pick up a brick. It sounds bad, but if you’re the kind of person to appreciate architecture and design, you won’t be bored one bit. Several architecture firms are featured in the book as well notable buildings from around the world. I haven’t spent a lot of time reading the thing, just flipping through it get a sense of what is inside for the review and I don’t think I even barely scratched the surface. I do wish the exercises were clumped together instead of interspersed throughout the non-building related content. It would make referencing the concepts easier if you ever wanted to go back. 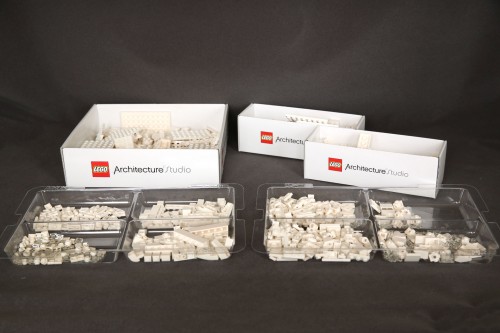 I think it’s great that the set includes several sorting trays but it feels like it’s barely enough. The pic above is a bit misleading as there were still a good pile of elements dumped inside the box. One of the side panels of the box shows all of the pieces neatly organized within the given trays, but look closer and you’ll realize that the elements are mixed. It’s not that big of a deal but to achieve the same level of organization would take some time and something you should do sooner or later. When I opened the box, I just ended up just dumping all of the pieces onto the table and went at it. There’s something pure and nostalgic about just sitting in a pile of bricks and building what you can. But if you’re serious about using the Studio set for its intended use, then the organization is necessary. It will make part hunting so much easier even if the sorting isn’t as granular as can be.

Surprisingly, this set did not come with a new-style brick separator. I grabbed one from own stash to help remove separate some of the plates and tiles. Out of all the sets out there, this is one where including a separator makes the most sense.

The piece selection consists of mostly basic bricks and plates in varying sizes. You also get tiles and grille bricks for texture and trans-clear elements for window effects. Slopes of varying degrees are also present. I do wish the set included some more parts such as 4L bars, 1×1 hollow round studs, and 1×1 bricks with 1 stud on one side to start, but maybe perhaps there will be a follow up set to complement 21050 Studio. I’m not holding my breath though. If you want to read a more thorough breakdown of the parts, visit The New Elementary. 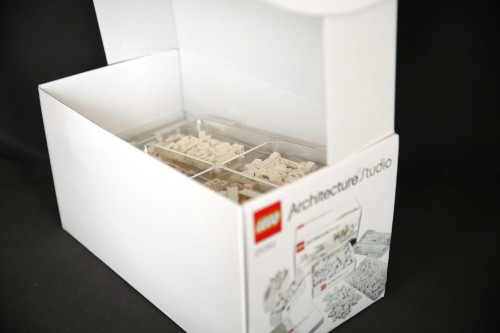 The box is large and roomy, allowing you to store all of the pieces inside and because of it’s fliptop design, you run no risk of losing any pieces as long as the box is kept upright. One thing LEGO could have done to really make the packaging super convenient is if they had a handle come out of the top with a double flip top lid. Carrying the box isn’t easy as it is rather bulky and weighs a little under six pounds fully loaded.

All that aside, I decided to try and build something tonight for this review. I flipped through the book and came across a section titled Abstraction where you take an animal as a source of inspiration and design a building from it. They use a bird, and in four steps, go from concept to imagining your creation out in the real world. It’s funny seeing the leap in design aesthetic between steps 2 and 3, but no matter, the message is the same. I decided to use a dog and rather than try and sketch build a dog from scratch, I just reached for the Target gift card model and use that as my inspiration. 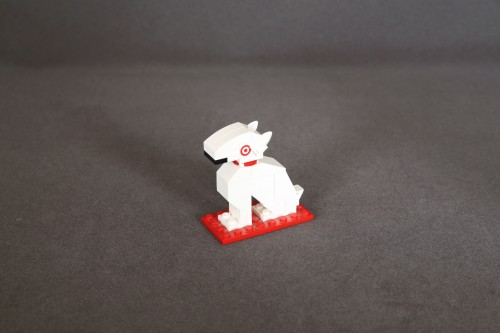 After a few moments, I abstracted the model a little further and created the following: 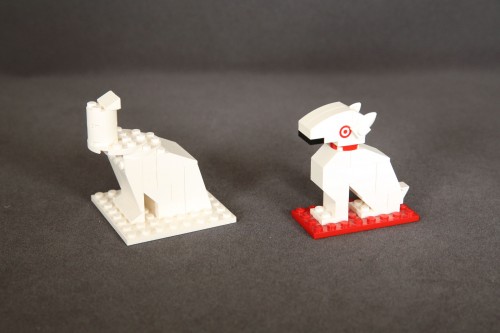 I wasn’t too thrilled with it and while I was shuffling piles of parts around, and this is where surrounding yourself with a pile of parts pays off, I slapped two quarter round pieces together and though “platform”. I then imagined a cliffside mansion and came up with the following: 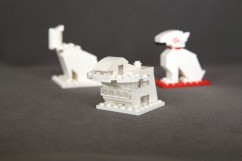 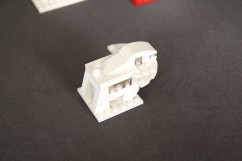 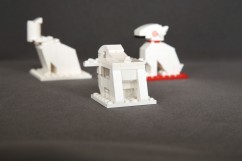 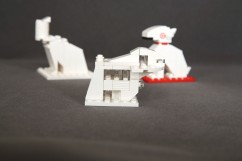 And this I’m satisfied with.

I think the biggest hurdle for anyone picking up pieces to build something using parts in this set is to grasp the sense of scale. One builder I saw at the event at Barnes & Noble grabbed several of the larger plates to use as a base. Instinctively I had a feeling that was the wrong approach. I picked up an 8×8 plate, and then looked the pile of parts, in particular a 1×1 round brick. Then it hit me and that 8×8 plate became palatial. After going through all of the pieces you get in the Studio set, the potential for designing buildings is limitless.

I see 21050 Studio as an adult version of a brick bucket. Remember as a little kid, you might get Salisbury Steak for a school lunch? 21050 Studio is like a good New York strip or ribeye. It is much more refined with it’s all-white color palette with trans-clear pieces thrown in for window effects. With the guidebook in your hands and inspiration coming from just about anywhere, you’re free to build just about any building. This set, out of all of the sets out there, made me feel like a kid again with its free build approach. You’re not given an instruction book, just a guidebook. There is obviously a focus on architecture, and the elements you get are catered towards that style of building. Building a spaceship could be possible, but if you’re doing that with this set, you’re missing the point entirely and you could be spending that $150 on something more appropriate. But if you “get it”, you just might enjoy the set.

I see 21050 Studio as an architect’s tool as well. I can imagine it being useful for rapid prototyping and conceptualizing as long as the designer sticks to a small as scale as possible. The initial build should consist of a few basic bricks slapped together to get the general shape. Once that is built, you can refine that idea by substituting pieces and introducing more and more detail, like carving a statue out of marble, only your medium is LEGO. For serious architecture projects though, LEGO does have its limits so it may not be the best tool for the job. But it can be useful.

You may not be able to design the next Walt Disney Concert Hall, but it’ll be fun trying. The $150 price tag may turn off most people but fans of LEGO’s Architecture line or fans of architecture in general shouldn’t shy away. Hopefully, the quality control issues aren’t as prevalent as I presume them to be, but that shouldn’t detract you from the overall experience of 21050 Studio. It’s definitely a niche product for a niche market. That being said, parts monkeys probably won’t see the value. From an economics standpoint, The New Elementary article breaks down its value against bricklink. You may be able to order a similar palette of parts for even less But aside from hard numbers, it’s the experience you’re buying and I can safely say it stands apart from just about everything else LEGO has to offer. 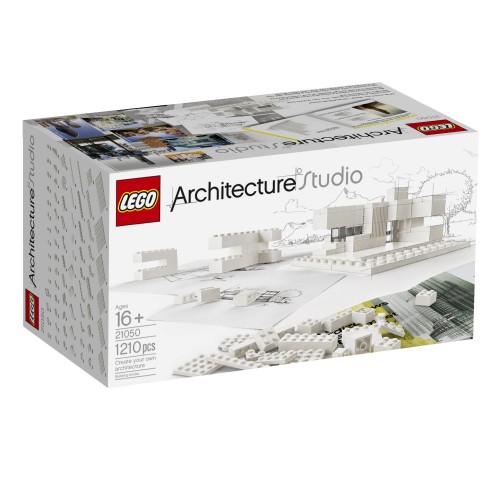