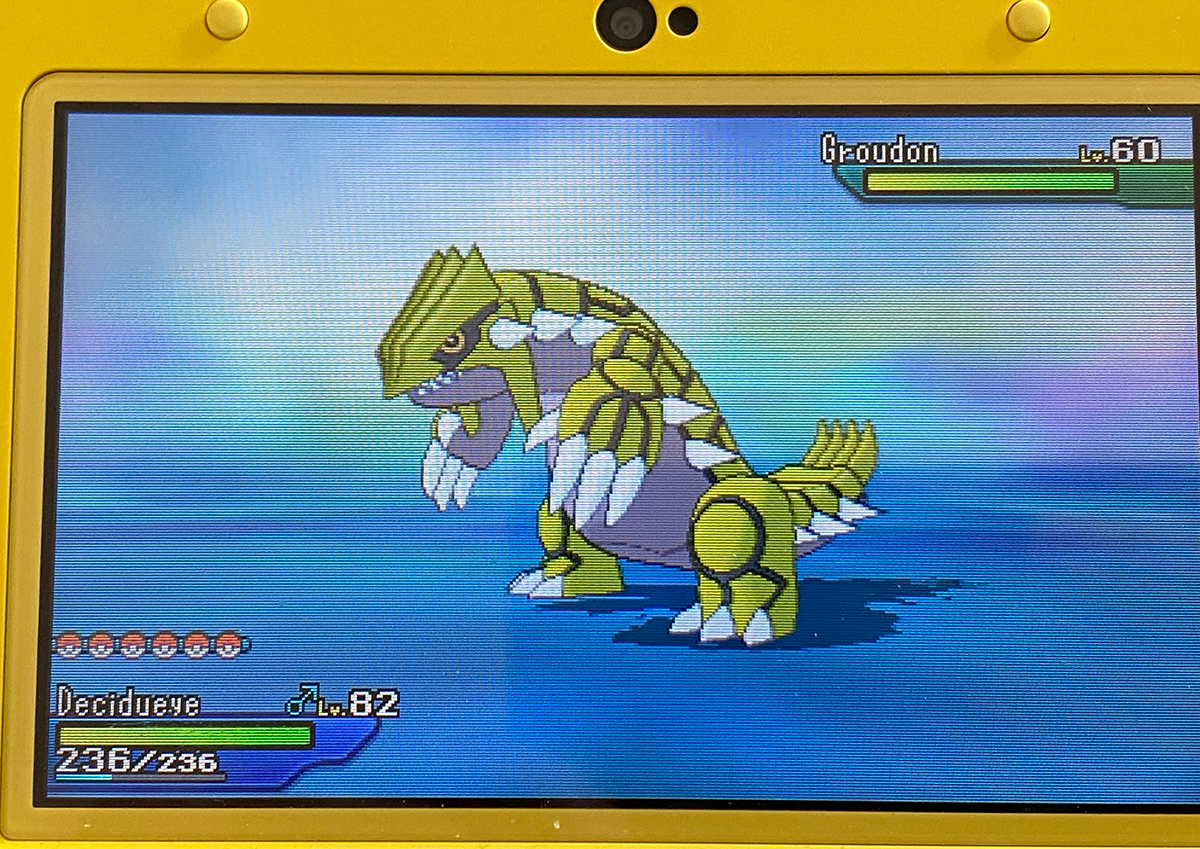 You know how last week I was feeling a bit burnt out and decided to do something a bit different? Well boy HOWDY did it pay off:

Look at him! The Jolly Green Giant in all its glory! It only took 1,481 soft resets too which feels like nothing. Shiny Groudon is not part of the Alolan Pokédex so I’m not numbering him. It is my goal eventually to get all the legendaries in normal and shiny versions, but that is like way down the line. This definitely helps keep my interest vested in my endeavor here.

Feeling energized, I went out and caught me a second Riolu, which I leveled up into a Lucario. This guy only took 2 SOS calls! TWO! And this came right after a Shiny Groudon?! I could barely believe it myself. One of my OCD habits when it comes to collecting these shinies is that if I pick one Pokémon to get a shiny version of, I have to get the rest of its evolutionary forms as well or else bad things will happen. Don’t ask me what those bad things are, but they are bad. So when I was collecting the Pokémon that end in U, I didn’t have enough time to complete the Riolu/Lucario line not for the lack of effort. I must have attempted it a couple of times but since I can be my own worst enemy, I had to give it up cause I ran out of time. So catching it on the second SOS call really made my day. And speaking of completing evolution lines, I had caught this one during the ‘U’ phase:

This one was a bit of a drag, 397 calls. But that’s okay. This is the one I used to help me get Shiny Mimikyu.

I caught a second Shiny Chinchou during the ‘U’ phase, which I evolved into Lanturn. Thankfully only 12 SOS calls because I didn’t want to spend so much time focusing on looking for the star animation.

The Salandit and Salazzle lines were next just because. Salandit took 263 calls.

I had a high-level male Sylveon with Cute Charm ability that made this one possible. 127 calls for this one.

This is the third Shiny Dratini I ever caught after 141 calls. The first two were on Pokémon X.

In Pokémon X, I evolved one of the two Shiny Dratinis into a Dragonair. I was trying to get a third one to evolve into Dragonite, which never happened and it always bugged me for reasons above. This one was marathon of 569 calls.

Now, I can finally close that chapter in the book. But I gotta tell ya, Dragonite looks nothing like it’s predecessors. I think something along the lines of Haku the River Dragon from Spirited Away would have made much more sense design wise than this thing. Looking at Dragonair and Dragonite is like looking at Young Elvis next to Old “I’ve let myself go” Elvis. Shiny Dragonite’s coloring is pretty awesome though.

And there it is. I’m almost 10% of the way through collecing the Alolan Shiny Pokédex. I’d be lying if I said I wasn’t tempted to try my luck at more soft resetting in Ultra Space Wilds. Getting Shiny Groudon has me totally stoked still. Thirty-four down, three hundred fifty-nine to go.