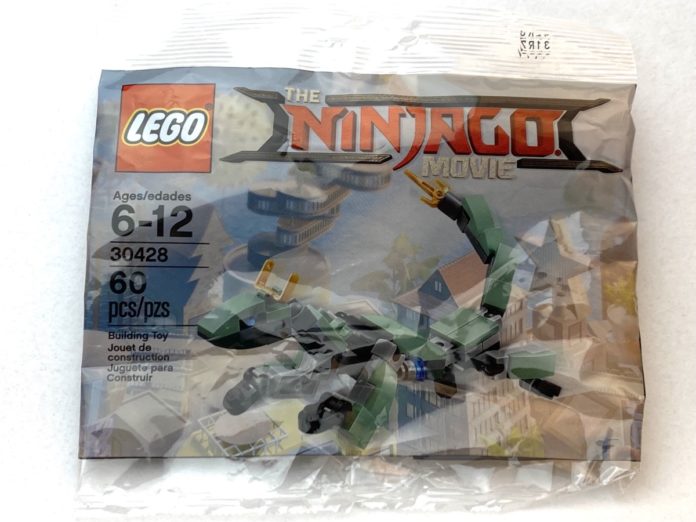 Ah this one takes me back. Back when I reviewed the larger version, 70612 Green Ninja Mech Dragon, I was going through a personal renaissance of sorts. That review came just a month and a half after I made my LEGO shame public. This was a set I really enjoyed and enjoyed reviewing. It was probably the one and only review where I took the set outdoors and shot picture. So today’s polybag, 30428 Green Ninja Mech Dragon, is a bit of a throwback for me. 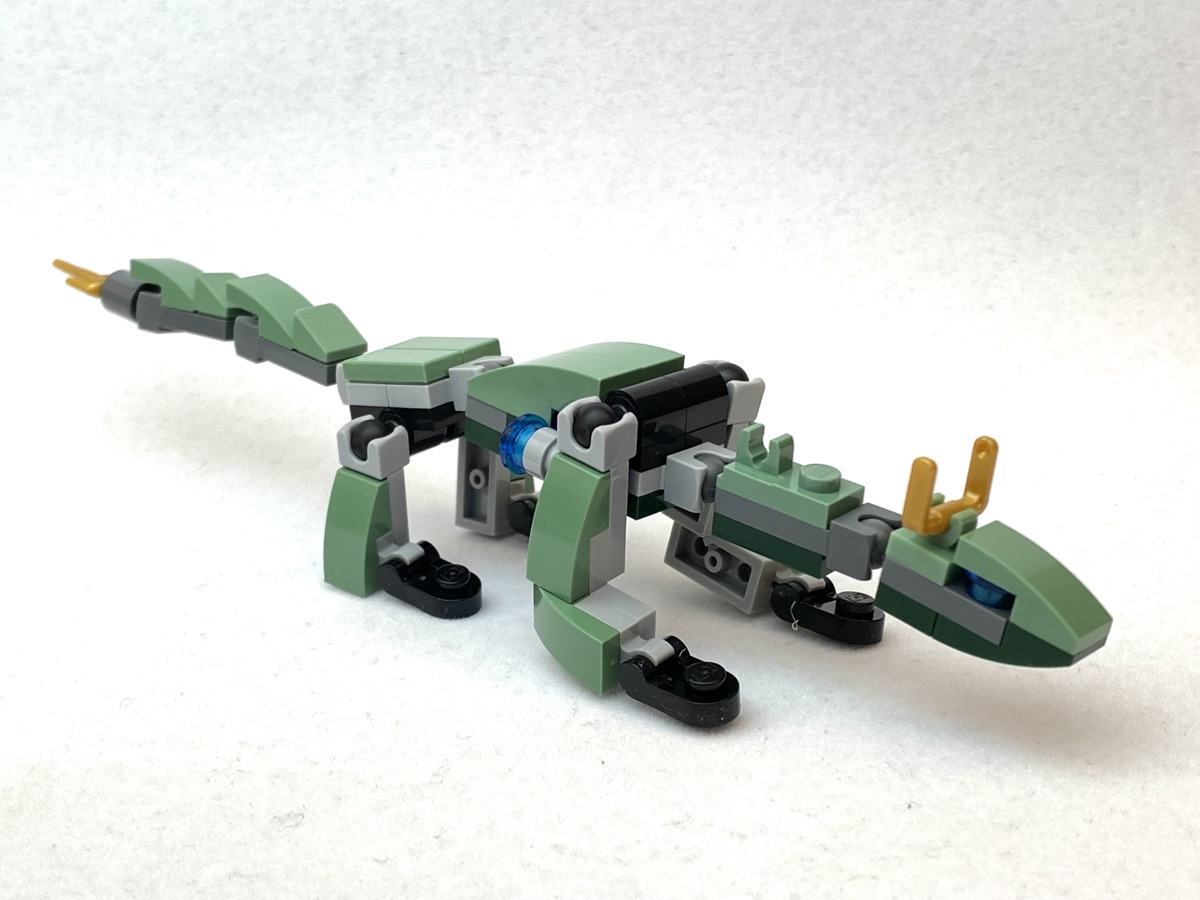 Being a mini, I don’t expect any minifigs to come with this set. But had they included a painted trophy fig to put on the lone stud just behind the head I think I would just lost it completely. That would have made this polybag JUST PERFECT! Alas, we are not that lucky. 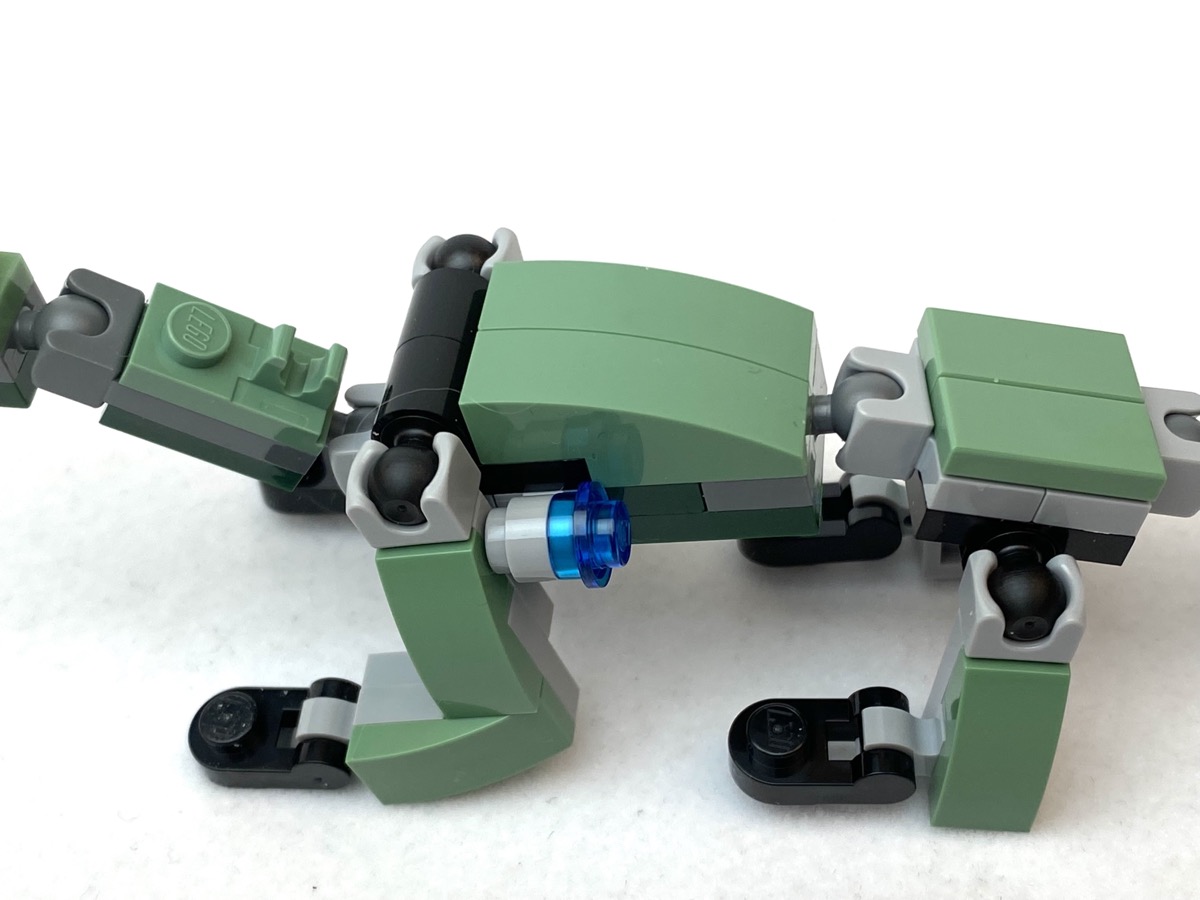 The body is in two parts and aren’t really noteworthy in any way. 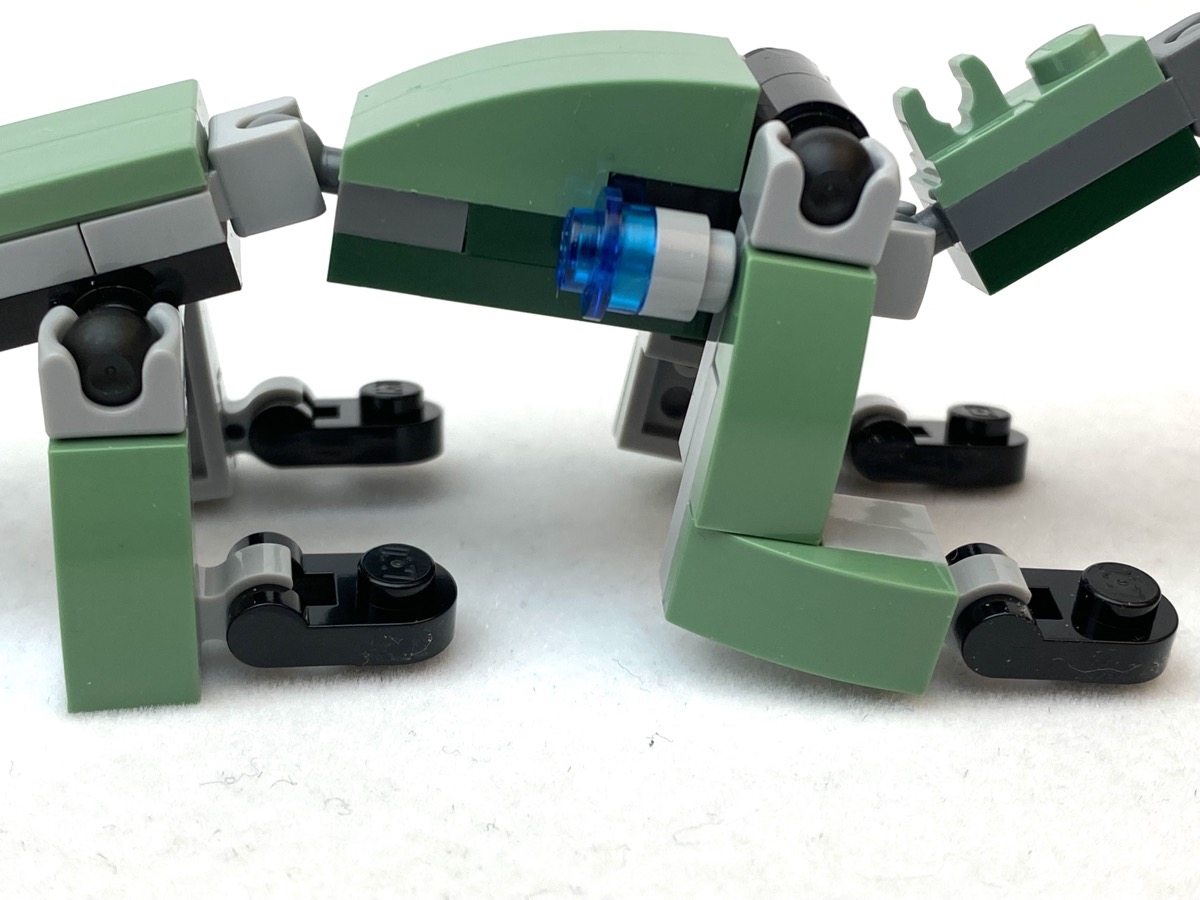 The legs are built at right angles with a round 1×1 plate with a bar handles for feet giving it an elongated look. They look like when a toddler puts on his/her dad’s big work shoes. It’s a bit difficult to have the feet lie flat on a surface. Probably the weakest part of the build. 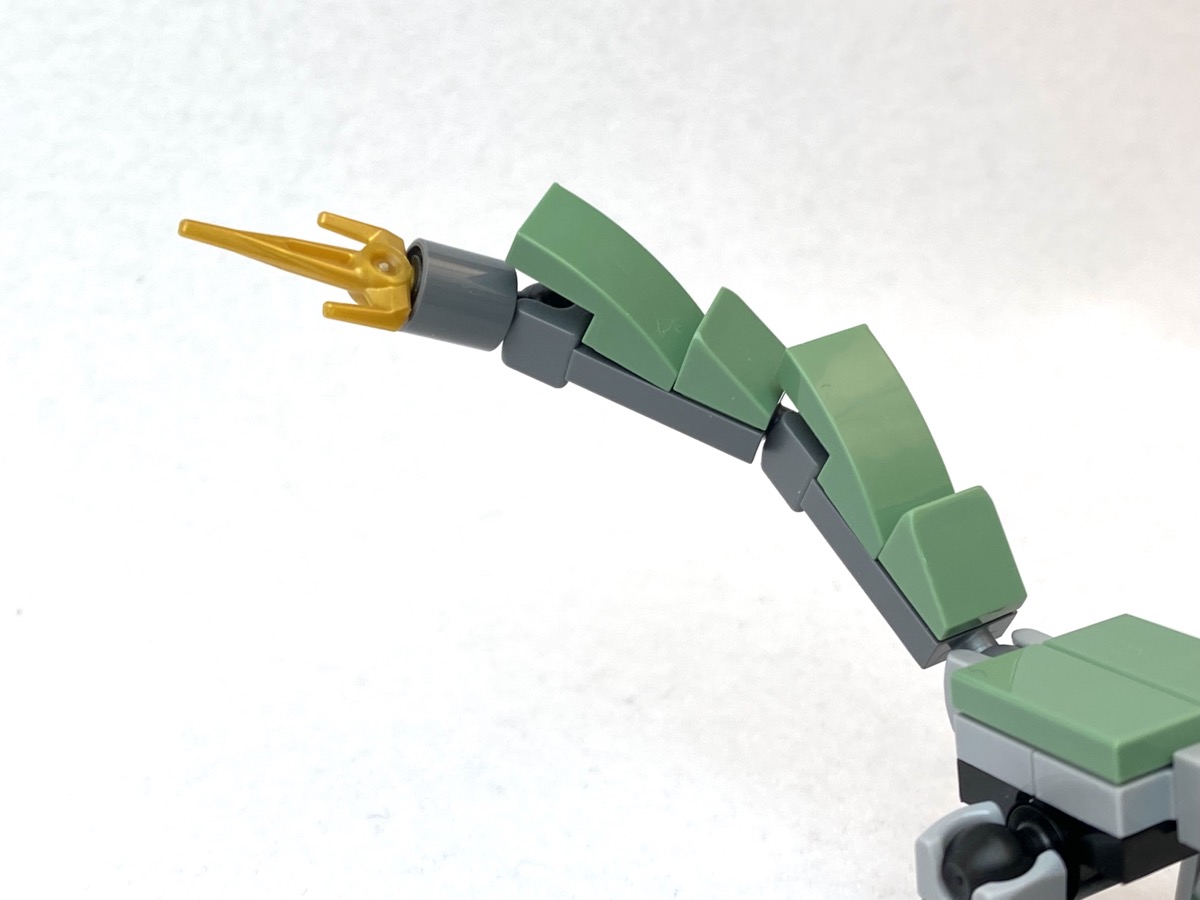 The tail is pretty awesome. Using a combination of cheese slopes and 1×2 curved slopes, it gives it a nice scaly look. I appreciate the fact that the second “scale” on the each of the tail’s segments use the 1×2 curved slope. The excess part of the element hangs over the ball joint hiding the articulation. It’s really a nice effect that isn’t seen in many of LEGO’s other sets that feature ball joints. And unlike the tail on the larger set, this one won’t swing freely which is great. 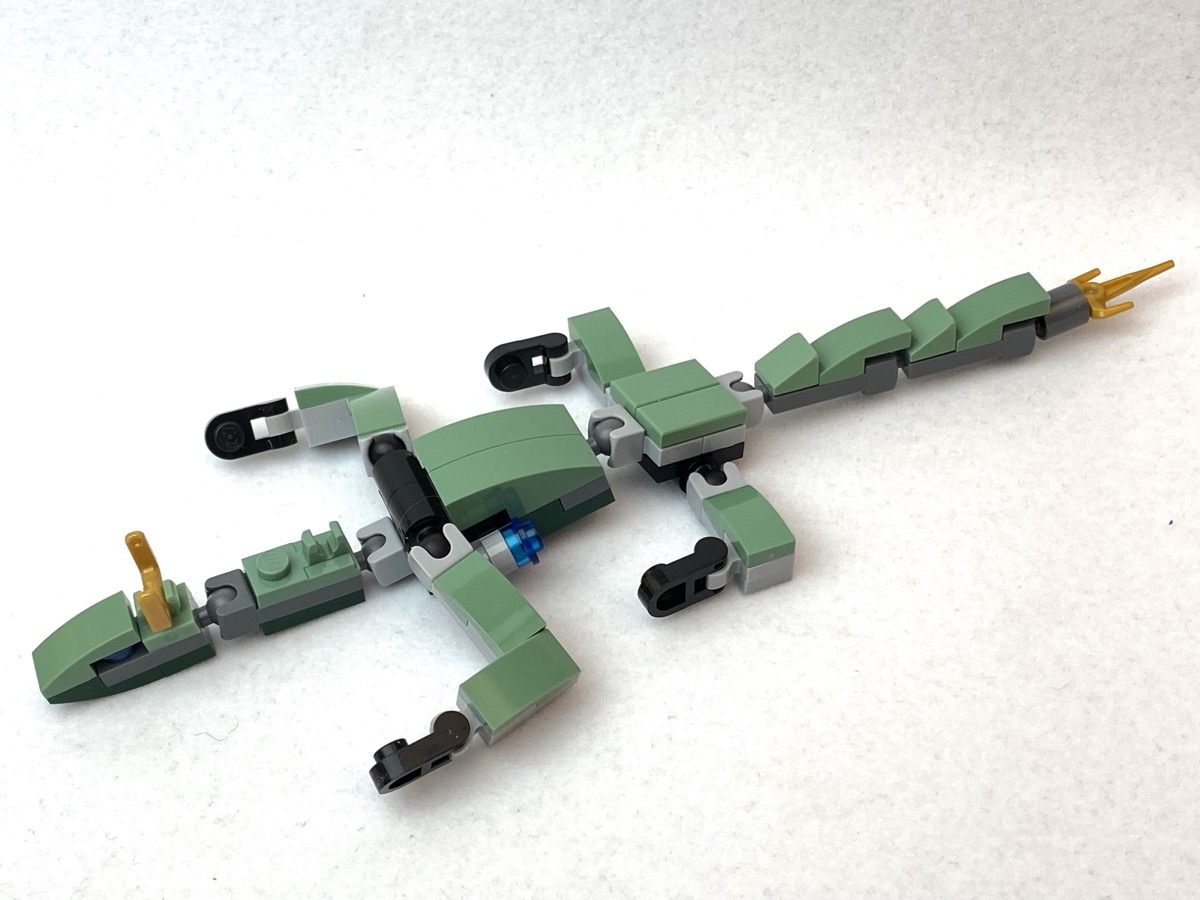 And speaking of ball joints, they are just everywhere on this set. There are a total of 10 from head to tail. So even if you’re not into the sand green elements, or the awesome mini mech dragon, it’s a great parts pack for the joints alone.

This set rocks! The LEGO NINJAGO Movie gave us some really awesome mechs, and the polybags are just as great. This 30428 Green Ninja Mech Dragon continues that tradition.