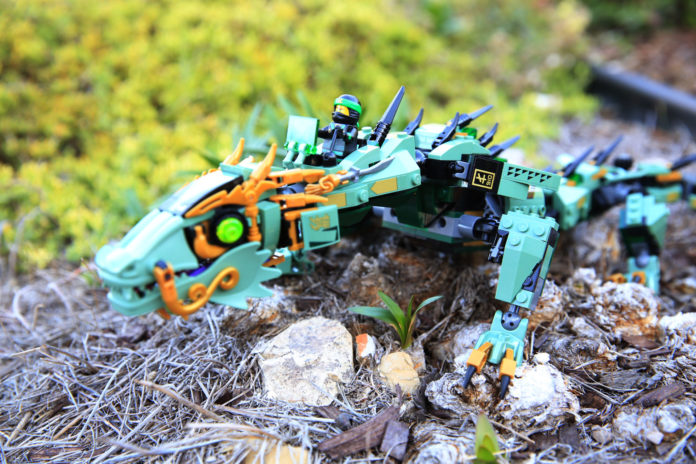 That thing started happening again. No, not forgotten Amazon pre-orders showing up unexpectedly. That thing where posting on the site started to feel like a chore, and this time it’s because of this review. I’ve been trying to review 70612 Green Ninja Mech Dragon for days now, maybe weeks. It’s been built, sitting on my table, waiting for its photo session and the accompanying puff piece. But every time I sit down to write I just couldn’t muster up the words.

So I scrapped my initial draft and sat down to write with a new approach: just hit the highs and lows, just the beats. No need to try and sound smart or articulate, just get the points out there, right? Isn’t that why we read reviews?

I also decided to try something new with photos too to keep it interesting and took the set outside to photograph. Even busted out the good camera! But I’m out of practice as I blew out the exposure but was able to recover them enough. Anyways, onto the review!

The Stuff I Liked

You get Lloyd in ninja garb, Master Wu, Garmadon, and Shark Army Thug. LEGO could have left off Shark Army Thug and this set would have been just fine. The other three are major characters, two of which are unique to this set.

The eyes, man, the eyes! When I started building the head and assembled the handlebars, I was all like,Â  “What the hell is this for?” and then I attached the black bowl elements and then I was all like, “Holy crap! That is AWESOME!” Also, check out that pearl gold banana! 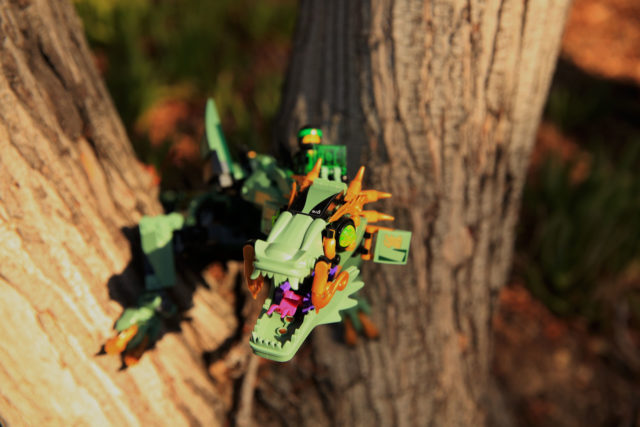 The pearl gold elements really dress up the dragon’s face really nicely. And the mouth opens and closes complete with a purple tongue. Aside from the head the overall shape of the dragon is pretty nice.

Tons of sand green, dark green, and pearl gold elements. I remember a time when sand green was rare, but I’m glad they are becoming more available in a variety of parts. 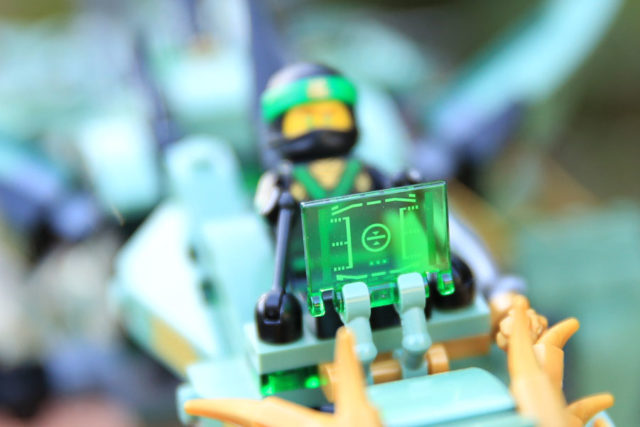 There is also this HUD screen that I really liked.

The Stuff I Hated 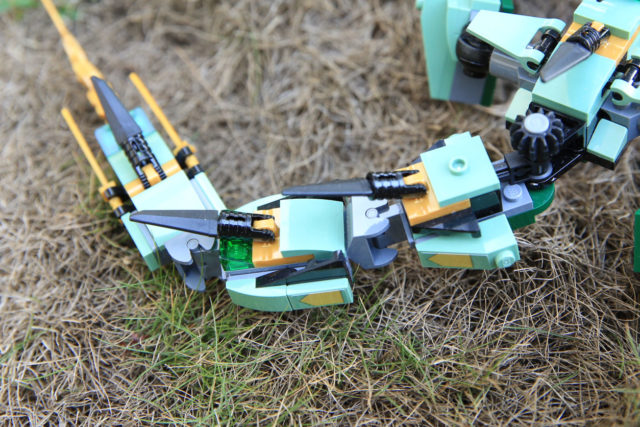 The tail of the dragon is articulated using loose hinges. They flip flop around when swooshing it and doesn’t really stay put when sitting on the table either because the butt part of the dragon is angled upward ever so slightly. Because of this angle, gravity will pull the tail and make it swivel. Annoying. I may be in the minority here; I honestly don’t know if this kind of free motion is something that appeals to other people or kids. Kind of hard to make it hold a specific pose when all it wants to do is follow the laws of gravity. Like I said, annoying.

The legs would collapse with any sort of downward pressure. Kind of an issue when a kid is trying to seat Lloyd or attach Master Wu to one of the studs, like one of the box image shows. My son kept asking me over and over to fix the legs so that it would stand up straight again. For adult usage though, the legs held up fine and allow a variety of poses on a variety of surfaces, as these pictures can attest to.

And the final score? I’ll have to give it a four out of five stars. It’s got a lot of nice things going for it and I would have given it a five out of five, but that tail knocks it down a peg. It’s still totally worth picking up at full price though, $49.99 MSRP. That price isn’t outrageous and you get a lot of value for what you pay. But if you can get it on sale, even better!

There. Banged that out in like 30 minutes (not including photography). Feels and reads much better than my original draft, even if it got wordier than I had intended.

Yes, but you’ll need to do a lot of disassembly. Two would be better and you can just separate the dragon at some of the hinges instead for easy re-assembly.

As of this writing, Amazon did not have any in stock. But you can pick it up from LEGO Shop@Home for regular price. Even better, right now you can score a free Master Wu keychain with your purchase of $35 or more from Shop@Home. This deal is good until December 7th. 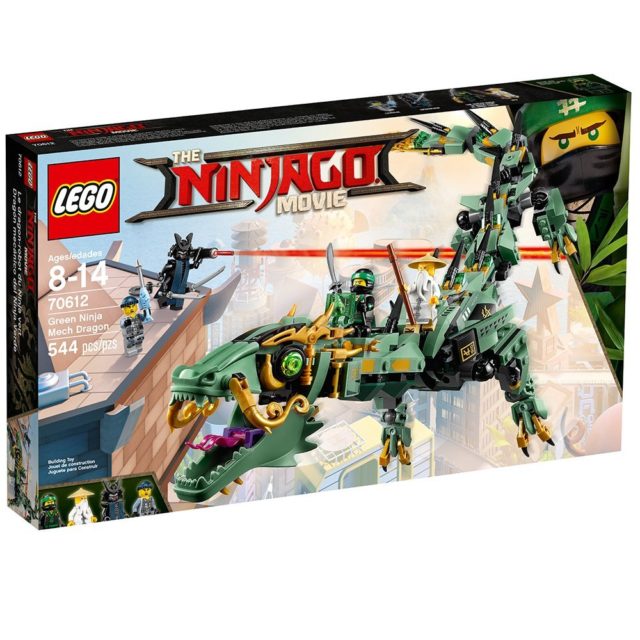 No Giveaway This Time, My Son Took It

Yeah, he’s not letting this one go. He’s having a blast with it.