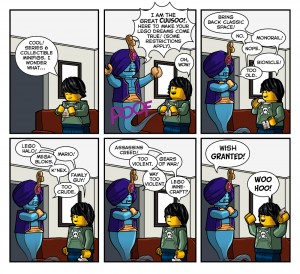 When the Cuusoo program launched it’s first crowdsourcing-approved project in Japan, 21100 Shinkai 6500 Submarine, I wondered if the program would ever make it to the states and if it did, what our first product would be. I never thought that the first product would be LEGO Minecraft. Not that I have anything against Minecraft or anything. It just seems like the simplistic nature of the graphics already lends itself to LEGO and making an actual set may result in just a box full of basic bricks. I guess an analogy would be taking paint to paint a picture of paint. Penny Arcade did a strip that pretty much sums up what I’m trying to say. Our strip has a slightly different take on it. Out of all the proposals that could have been approved, Minecraft got the most votes? I could walk into a store, buy a bucket of bricks, slap a Minecraft label on it and call it a day.

Regarding our strip name, we’ve gotten a ton of responses. Thanks to everyone who took the time to come up with a suggestion. We think we’ve settled on one, but are making sure all appropriate channels are cleared. We were intending to reveal the name in the next strip but that may be delayed another week or two. Stay tuned.