Assuming you haven’t been living under a rock, there’s a new LEGO theme for 2012 called LEGO Friends. It doesn’t take rocket surgery to see that it’s squarely aimed at girls. BusinessWeek did a rather lengthy article introducing the line a few weeks ago. LEGO says they’re targeting “the other 50%”, which is another way to say that their marketing efforts were targeting boys all along. So what do they do? The introduce new colors, design a new minifig to look more like miniature dolls and put it all together into a new theme. And this seems to be the point of contention that’s got a Brooklyn woman in a huff enough to start a petition. The anti-Friends position claims that the new figures in the Friends line are “sexualizing” the minifigs by making the figures curvier and giving them breasts.

Really? Do the figures look like they have breasts: 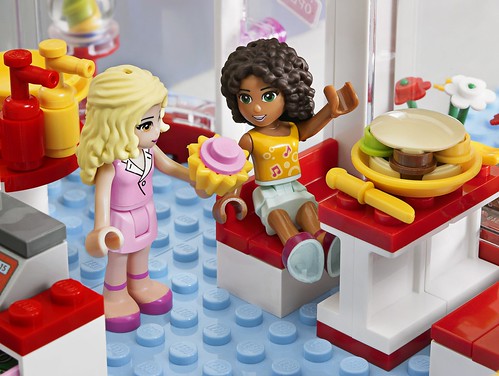 OKay, so they do. But I don’t understand what the big deal is. Girls have breasts. Is this some sort of secret that we’re trying to keep from them?

Other than the whole breast issue, there’s whole slew of arguments against the Friends line, like how the sets are promoting gender stereotypes. Sets like 3315 Olivia’s House certainly isn’t helping LEGO with that image. Despite that, the Friends sets are actually quite tame compared to other toy lines marketed towards girls like Bratz and Barbie dolls. I just don’t think the onus should entirely be on LEGO to break those stereotypes. They’re just a toy company making a toy for girls. If you don’t like it, don’t buy it. Or buy it anyway and encourage your child to think outside the box and build something else with the pieces.

What does any of this have to do with FBTB or licensed themes? Nothing. It’s not exactly how we planned on launching our new comic strip called STUDS but all the controversy made it easy to come up with a joke. We’ll start our regular storyline next Wednesday.