When I did the review of 75038Â Jedi Interceptor, I commented that I really wished that Lego would do a remake of the very rare Obi-Wan’s Jedi Interceptor that was part of the Ultimate Space Battle, a set that perhaps eight people ever bothered to pick up. The real issue with trying to get that set was the dark-red wings, which had only been part of the original set. We’ve gotten them in all sorts of colors since, but the dark-red continued to be a rare, and rather expensive, part on the aftermarket.

Luckily, around the same time, preview pictures of the Jedi Scout Fighter showed up, and we saw that there was going to be a new set that actually included them. Sure, it also had Jek-14 and an Ilthorian, but for me, it was all about the dark red wings. I know nothing about the Yoda Chronicles anyway, so I was looking at this set purely from a ship and parts point of view.

Strangely, the wings are still expensive on the aftermarket, which tells me that not many of these things have been parted out. They are available on Bricks-n-Pieces, though, for quite a bit less than the average aftermarket price. I’d like to say this is the first time I’ve bought a set just for a handful of parts, but that would be a lie (that’s basically the only reason I ever bought anything in the Ninjago or Chima lines), and it’s certainly not the first time I’ve bought a set, even a Star Wars set, that I didn’t know anything about.

The 2014 summer lineup hasn’t exactly been knocking our socks off, but maybe this can be the set that can change that.Â At $ $60 (typed the wrong price, whoops), it isn’t exactly cheap, and leaves you wondering if you would rather get B-Wing or a similarly priced set, but it also comes in with a lot of other dark red, some windscreens, and the aforementioned Ilthorian, a new Astromech… and the build will get you thinking about the Transformers, so there’s that.

Seriously, when I was building this set, for at least the first three numbered bags, I was wondering what it’d take to turn this thing into a Jetfire mod. It’s hard to build the cockpit section and not start thinking about an F-14, even if the nose isn’t quite there. If Transformers aren’t your thing, just go drop a minifig in there and say “Tower, this is Ghost Rider requesting a flyby.” And then curse the fact that if you know the source, the next thing into your head was “Negative Ghost Rider, the pattern is full,” and you likely started to hum some Kenny Loggins.

It’s more likely that people are interested in this set for the minifigs than for the build, and they’re interested in the minifigs for one specific guy: the Ilthorian Jedi. There’s more though, we also get Jek14 and his glow-y arm goodness, a new Astromech, and a brand new type of Protocol Droid. What’s odd is that while the Ilthorian is certainly the wow one, it’s that protocol droid that I see as having the most potential in the future. 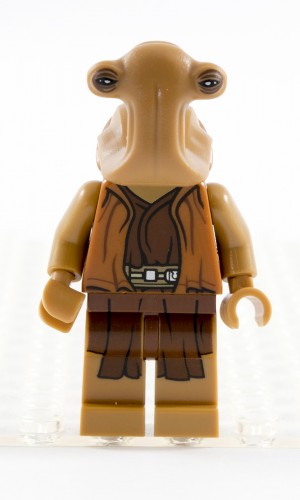 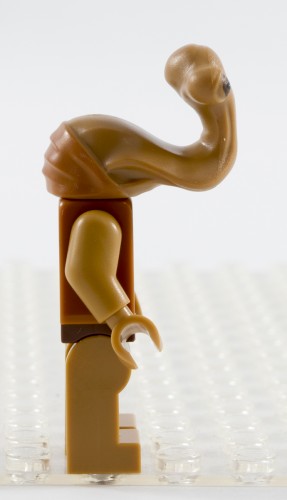 Now, if you’re like me, you couldn’t care less about an Ilthorian Jedi and you just want an Ilthorian, you just do a head swap on to a torso and put him into the Cantina. Or just leave the outfit as it is, and wonder why an Ilthorian is wearing a skirt and a thong. The only downside to the figure is the sad reality of physics, making him prone to tipping over very easily thanks to his head hanging so far forward. 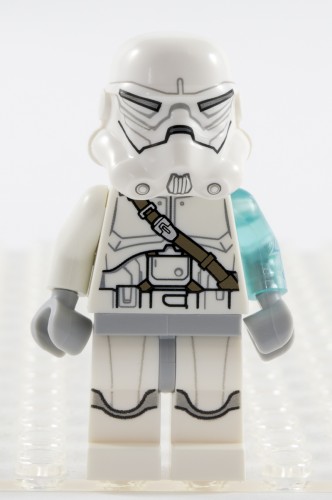 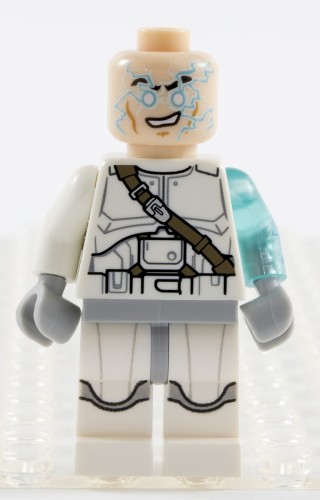 We also get Jek-14, who’s appeared in one other set (his starfighter, which came out earlier this year). I’ve never seen any of the Yoda Chronicles stuff, but know he’s basically a sith clone that has a glowing arm. The arm is awesome, and the head could seem some use, I guess, but that helmet seems like someone just marked it up with a sharpie or something. 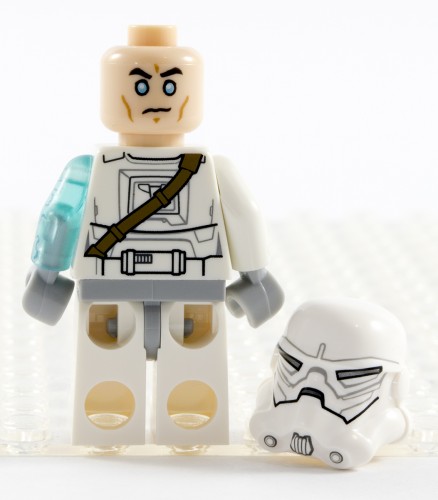 I have no real complaints about the guy, I guess. He’s non-canon even in the Star Wars Legends lineup, so I’d suggest grabbing him before his sets are gone forever and he goes the wayÂ Princess Kneesaa. This set is the cheaper of the two with him, and, like I said, Ilthorian. 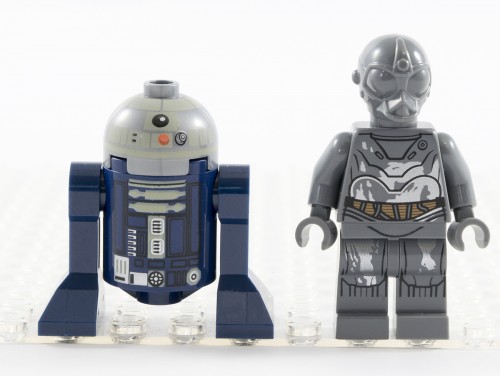 There are also a pair of droids. A blue Astromech with a dome that feels too light for the printing. once upon a time, getting a unique astromech color was a huge bonus in a set… but it feels like every one of them is different at this point, and I’m just tired of the variety at this point (much like Clone Troopers, honestly). 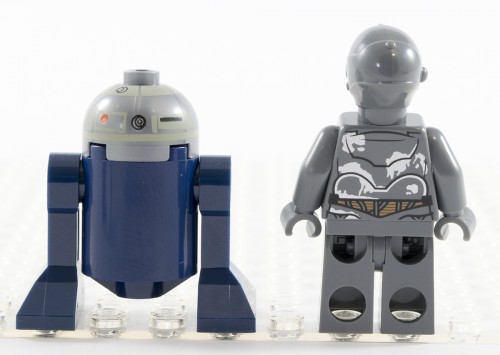 The real wow figure in these two is the new protocol droid, RA-7. We’ve gotten plenty of color reskins of these guys too (especially in recent years), but this guy has a new head. A head that if I squint I can almost pretend is 4-Lom. It’s not really all that close, but a guy can dream, can’t he? That leaves us with two standout figures in the set (Ilthorian and RA-7) and two that are interesting. Not a bad lineup, really.

Of course, the name of the set is not “four new minifigures,” it’s Jedi Scout Fighter, so there’s something to look at here. I have a certain attraction to the ship, because it’s a unique design for Star Wars, at least in a few ways… yet it uses build methods that I’ve played with in my own sets. Stuff like the general wing shape, the front nose, and the double cockpit are just fun little features.

This is an somewhat odd build and ship, honestly. It’s not a bad ship or build, but it doesn’t ever feel particularly Star Wars-y. Like I joked above, for the first part, you could easily be building an F-14 model (which would be cool), as you build up the cockpit. It doesn’t help that the source material isn’t exactly well-known compared to something like Clone Wars or the movies, but even the look of the ship doesn’t come off as inherently Star Wars any more than the generic Jedi Starfighters come off as Star Wars. 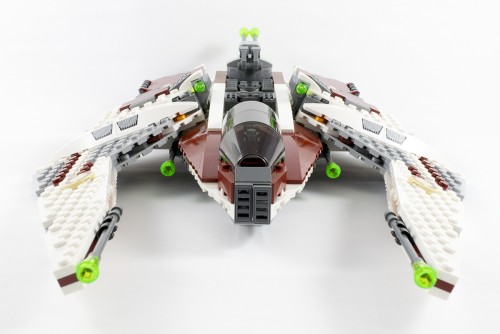 Unlike some things, like the bigger Venator or smaller speeders, which may be ugly but felt the part, or the various walkers that may be silly, but again, fit the feel of Star Wars (even if the feel wasn’t always fun). This ship doesn’t look like much else, outside the wings on the Eta-2 Jedi Interceptors, but it’s not really enough to make you think of it. The rest of it could be closer to the ARC based on color, but it really doesn’t feel like it building or holding the ship. 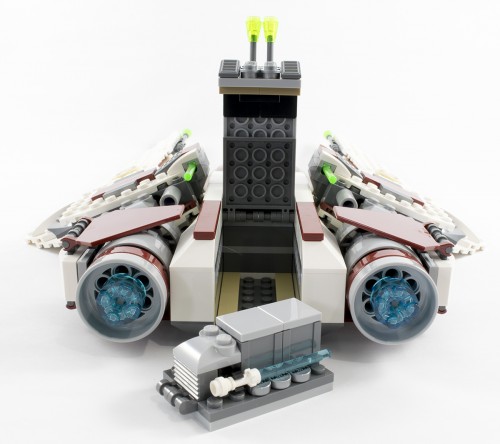 The vehicle is plenty swooshable and very sturdy, and has a few little play features. The back section with the turret opens up, and has boxes with those trans-1×1 plate things that all of the Yoda Stories sets have had. Someone who’s seen it, what are they? Did they decide to put in Energon cubes or something? You also get white lightsaber handles for Jek, which I love, but the opening isn’t all that big of a thing.

The one interesting build piece is very reminiscent of the Republic Gunship attachment for its wings, except improved even more. That pin was very hard to remove and was awkward to get at. Here, it’s basically slide that pin out and it comes apart. It’s a pretty elegant little solution, and a lot more solid than you’d expect such a simple connection to be. The wings also sit on there pretty fixed, and don’t flop around. It sort of sums up the ship… cool builds applied to boring material.

Of course, the reason I wanted this set was for the dark red wings on the back. Anything else was a bonus in it, and it’s not a bad mix of parts, even if a bit pricey for it. Plenty of dark red, two nice windscreens, and a lot of useful slopes and tiles.Â It let me build this, so that was fun. 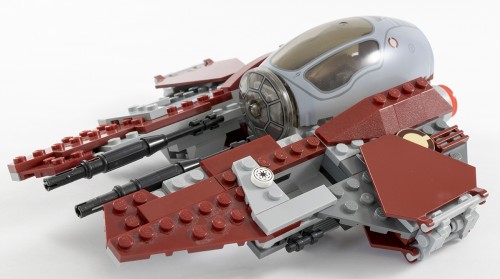 Oh yes, at long last, I have a dark red starfighter. Sure, it’s not the original one, I modeled it after Anakin’s Jedi Interceptor, which was a solid build (and the original was not). Now I just need to build a blue one to match what Obi-Wan flew later in the movie. I’ve since changed ou the slopes on the side of the cockpit, as I had to special order those since apparently dark red curved slopes are fairly rare (but not all that expensive), otherwise, this was made up with stuff in the parts stash (the window was borrowed from Anakin’s while I waited for a new one).

But ultimately, the set is the definition of average, making it a 3 out of 5, with the minifigs making it a solid 3. It’s not the stinker that we’ve seen in some of the other sets we’ve reviewed lately, but it’s not going to be that set you have to run out and by.Â The figures are nice, the part selection is okay, and the build is a bit more enjoyable than the finished product. It’s not an overly MOC-able ship, but there’s enough parts that you can easily incorporate them into something fancier. If anything, this would be an excellent source as an alt-build event.

Verdict: An average set with good minifigs and decent parts, even if a bit too expensive, making it a 3 out of 5. You can pick up 75051 Jedi Scout Fighter right now on Shop@Home, picking up double VIP points in the process! 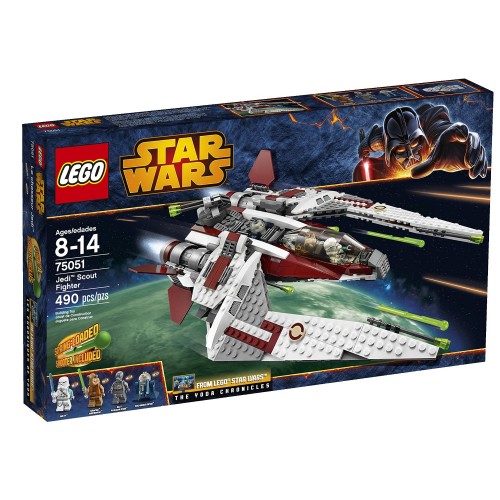