When the alternate builds dropped for The LEGO Movie sets, there was one set that just grabbed my attention: 70805 Trash Chomper, the $30 set with an impressive 389 pieces. The actual chomper set was fairly “eh” for me, since I’ve never been a big one for flying dumpster monsters. But when it comes to city trucks, I absolutely adore sets with things like garbage trucks (or recycle trucks, tractors, construction… basically non-Fire and Police stuff).

Part of that is because sets like that are always so different. A frequent complaint of mine in recent years is how much Lego themes seem to rely on setting up some kind of conflict. Obviously, that conflict exists in some things (pretty much any licensed theme), and even makes sense in their original stuff (Space Police, Ninjago, Chima). But I never get why things like Castle and City have to have a bad guy tacked on to create something like that. It’s especially stark when you look at some of the best sets in the line and how often they just ignore that other half, focusing on one thing and executing it well.

Okay, to be fair, there’s obviously a conflict in the Lego movie, but in the best sets, it seems like it’s more about the build than it is that conflict. Trash Chomper seems to really drive that home, giving us a robot that’s maybe 30 parts and then focusing all of its efforts on the trash chomper. Better than that, it’s a full 2-in-1 set, which means it gives you a second instruction book for building a traditional garbage truck instead of the chomper. The real question is does the set manage to live up to my, what are typically unrealistic, expectations based on a couple of pictures online?

See, that’s a tough question to answer in the end. This set is absolutely worth $30, given the piece count and versatility. But the two builds included are most certainly not created equal, and it’s obvious in the design which one was intended for the set and which one was built out of parts from the intended build. Strangely… it’s not the namesake of the set or what you see on the box art. 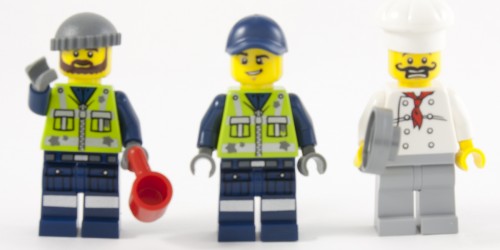 We get three generic-ish Movie characters in this set, Trash Man Grant, Trash Man Dan, and a chef named Gordon Zola (ah, the puns that keep on giving). 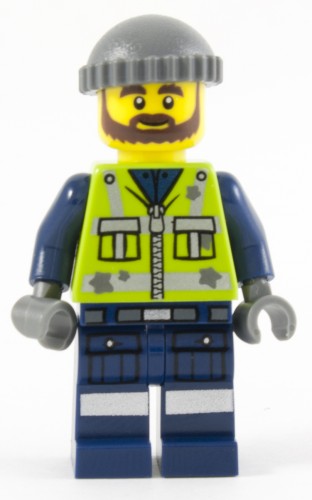 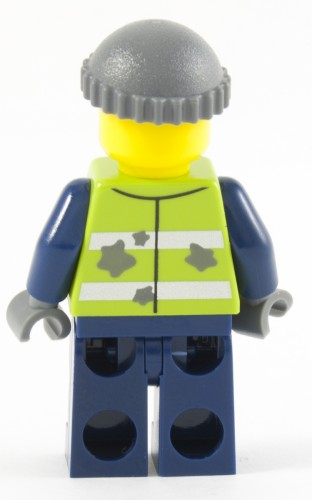 Both of our trash man minifigs are a bit dirty on the torso, with a nice lime green safety vest. The printed legs with pockets are a nice touch. 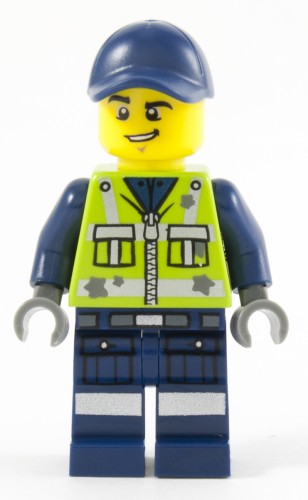 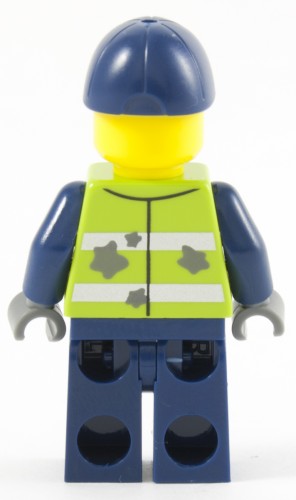 We also get a plain blue hat with Dan, and I’ve covered my love of the baseball cap hats in other reviews. So I love getting a nice plain one here. Both of these guys are good, generic figures you can toss into any set with a garbage theme. The legs, especially, have some versatility, and I’m a sucker for any minifig face with a beard. 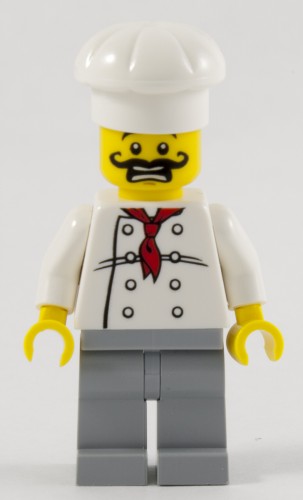 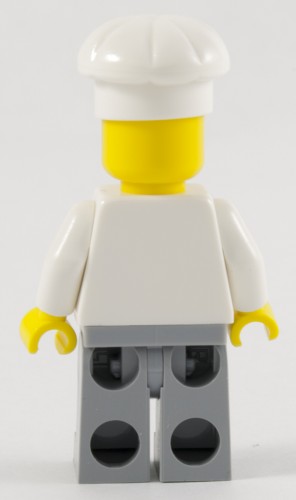 Chef Puntastic is a pretty much a typical chef, with a torso like we’ve seen in a couple small city sets or modulars. The evil villain mustache is nice, but I would like it more on a regular face over the surprised one. There’s also no such thing as too many chef’s hats, so that’s always a bonus. 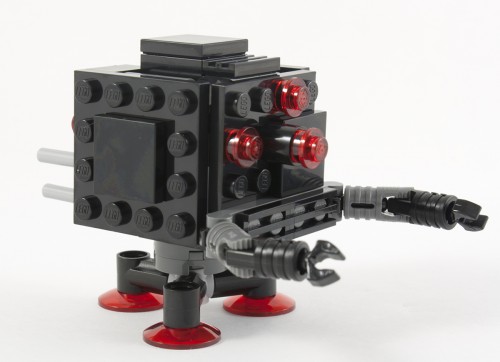 We get a Micro Manager robot, similar to the one that came with Creative Ambush, but a bit smaller and more jets than legs. 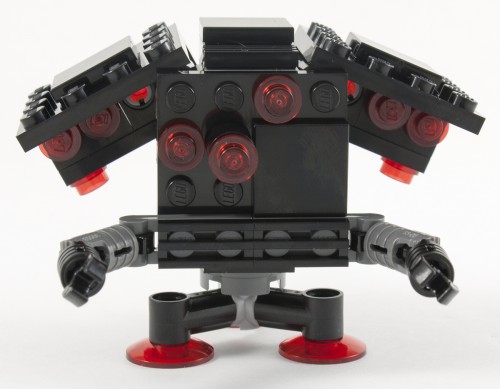 I like the larger one a bit more, though this guy is designed to fly and open up, instead of going all Mechwarrior. He opens to reveal a couple of flick-fires, but sits on a tri-point technic pin and some trans-red dishes. There’s not a whole lot to say about this guy, honestly. He’s fairly basic, and obviously not the focus of the set. 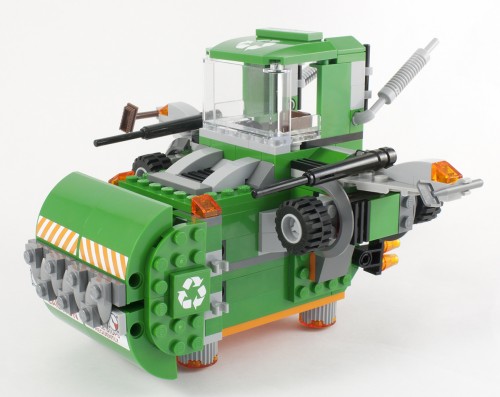 This guy is the focus of the build and the namesake of the set. I don’t know about you, but I’d be somewhat apprehensive about putting out my trash cans if that thing was cruising down the street. That and I wonder about what those wheels are doing on the sides there. 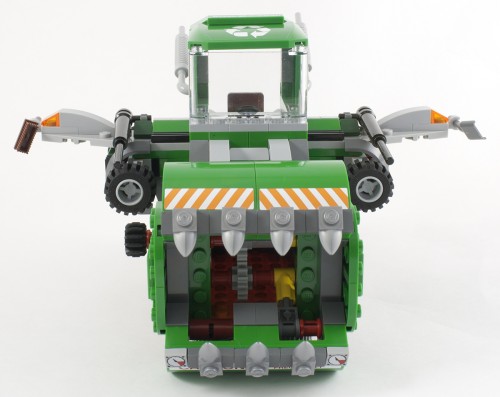 When I built this, I actually did the alt-build first, which was probably a mistake on my part. It just happened to be on top of the pile of instructions, so it’s where I started. The problem is that when i went to go build the chomper itself, it felt like this was obviously the alt-build, made out of as many parts as possible. 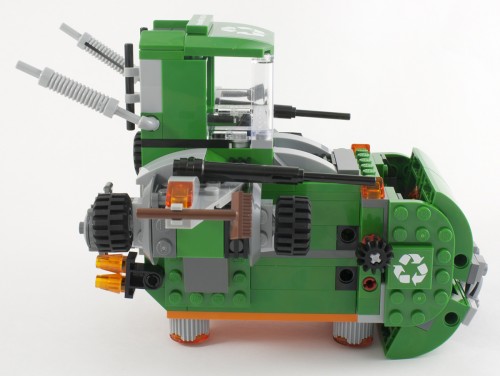 The majority of the build for the chomper is around the base, and it’s a whole lot of building a box. It’s kinda simple and basic. Not saying that’s wrong, just makes for a boring set, especially given how sharp so many other sets in the line are. 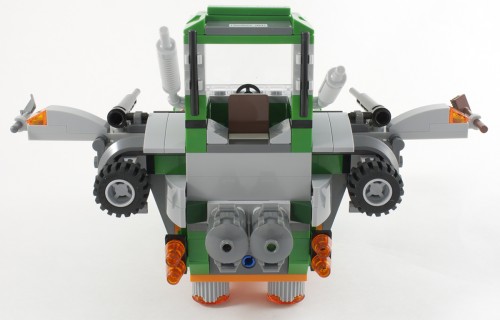 The chomper hovers or flies, powered by it’s trash cans and tires, though I’m not sure how aerodynamically sound the thing is. I’m also kind of out of things to say about it. By itself, this build isn’t really all that special. It’s not terrible, it’s just bland. Unlike stuff like Creative Ambush, the absurd factor really doesn’t make it shine. 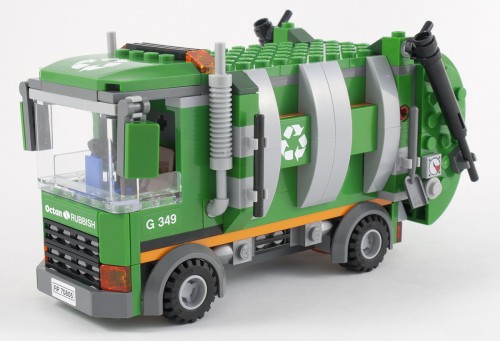 The alt-build, on the other hand, is just fantastic. How can you not love something that says “Octan Rubbish” on the front. I mean, the only time you hear the word Rubbish in America is when you’re watching some British TV. It’s also got a nice, unique little look, even among the city stuff like this. The flat-front works very well, and while it’s bigger than most of the other trucks out there, it entirely looks the part. 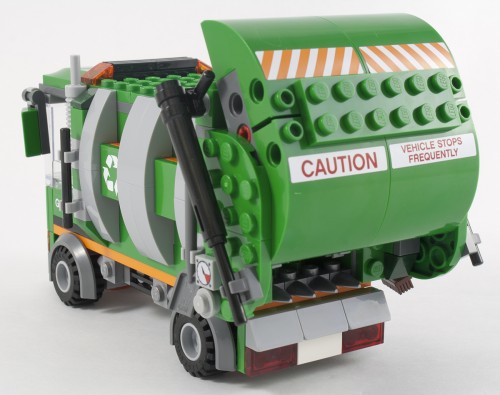 The back gate pivots on a center axle instead of the side bars, which are just there for appearance. That’s not really a terrible thing, since the most recent City garbage truck had a complex pivot system that sucked up a lot of parts.

Speaking of that last truck, that’s it up there, to give you a look what this alt-build is an upgrade to. The one on the right can still be found on shelves (it was released last year), only ran $20 and came in with 208 parts. Shame they’re not the same color green, or mixing the parts would make a nice model. Still, that new guy looks just fine next to the old one.

This leaves us with a very odd set. Value-wise, the set is absolutely top-notch, and the alt-build is a great truck. The minifigs are generic in a city environment, but the garbage stains do somewhat limit using them elsewhere (unless your space deck hands are very messy eaters). The robot isn’t quite as good as the one in Creative Ambush and the regular build is somewhat plain and boring. So I’m left with a set that’s worth the money if you want the truck or parts, but not as much if you’re just looking for some great Movie stuff. I don’t know what to make of that, and it makes it somewhat hard to score.

Verdict: 4 (out of 5). This set is amazing value and the alt-build is great. It has it’s downside, but just hit the alt-build and it’s worth every cent of that $30.

You can pick up 70805 Trash Chomper right now on Lego Shop@Home! 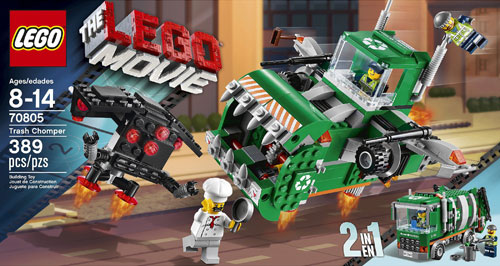