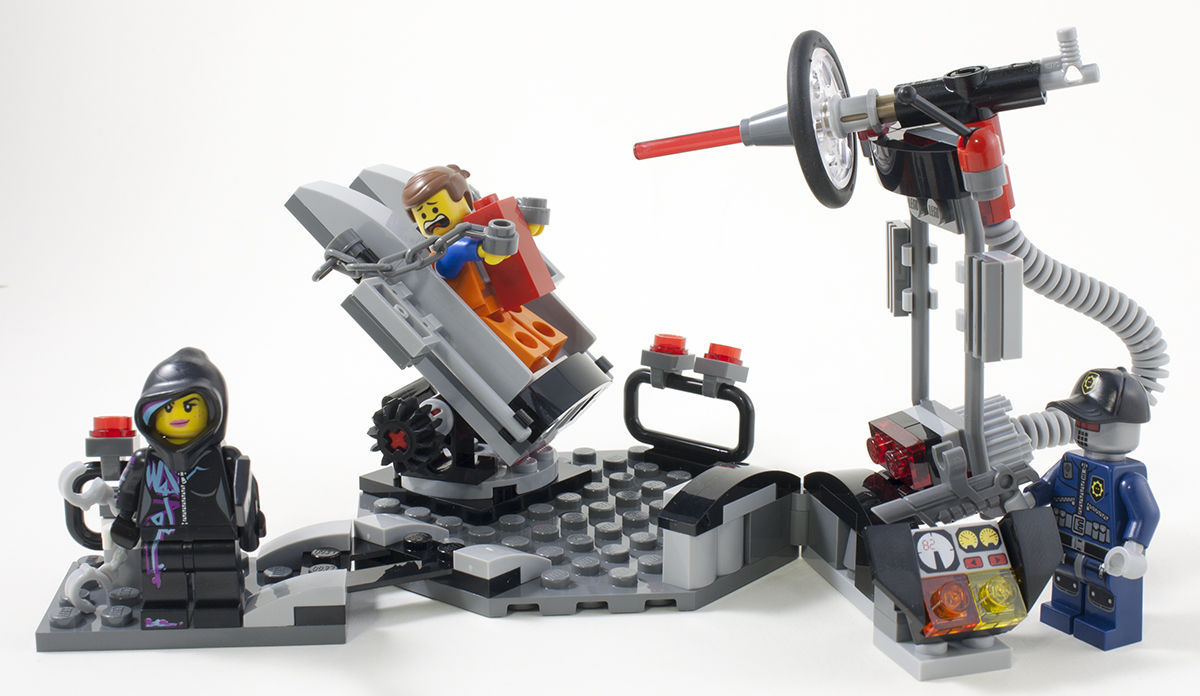 First impressions can be important. It’s why you should never lead with the offensive joke (save that for the hook), why everyone wanted to strangle Jar-Jar the first time he opened his mouth, and why some Lego sets can sort of languish after you see the previews. Sometimes, though, a first impression is just flat-out wrong. My first impression of the latest Republic Gunship was “this looks like the old one… meh.” And yet, in my review, it ended up being one of the best high-end sets I’ve ever put together.

My first impression of the Lego Movie sets was “those look somewhat silly but nothing all that special.” Sure, there was some stuff that held mild interest for me, like the minifigs, but none of the sets really popped out. Then, I saw some of the alternate builds, and I decided that, yeah, I’ll be getting a few of those sets. When I went to see that the Michael Bay presents “The Hobbit” I laughed at The Lego Movie setup out front that featured a Classic Space minifig with a broken helmet, something that anyone who had these sets in the 80s recognized immediately.

Now, after I’ve gotten these sets, and started to put them together, starting with the $12.99 small set, 70801 Melting Room, I can say that Lego has done two things:

So this is the start of Melting Room. On the left, the minifigs you put together. On the right, the first piece it has you use…

Okay, Lego now has my official™ attention in this set. Seriously, that’s how they’re going to open this thing up, by giving us a brand new part that just makes the MOC’er in me start jumping around with ideas. I asked Ace if I could just skip the set pictures and spend this entire review trying to make some sort of new starfighter with this (Don’s exact recommendation was “ultimate minimalist alphabet fighter”), but he said no. A lot of times, we get a hint of the new pieces when leaks and preview pictures hit. Stuff like the “brick” bricks and round grill bricks were all well known before any of us had the sets in our hands. This one, though, was unknown to me. I’m sure some eagle-eyed person brought it up somewhere, but I never even noticed it in any of the other pictures. 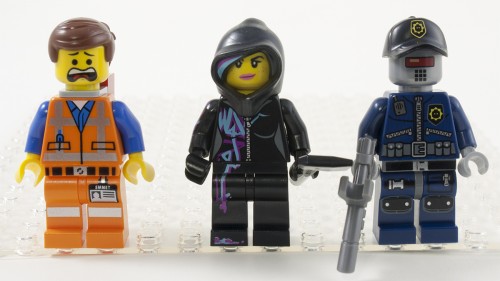 For minifigs, we get what I assume are the two “good” main characters, Wyldstyle and Emmet, along with a robot police officer. I really don’t know all that much about this movie, as I usually like to be surprised and skip a lot of the trailers and material, but kind of like the self referential nature of these. Sure, Wyldstyle has too many “y’s” in her name, but she’s got bits of several CMF figures in her makeup. Emmet is a construction worker (I assume) that gets scared easily. Also, robots! 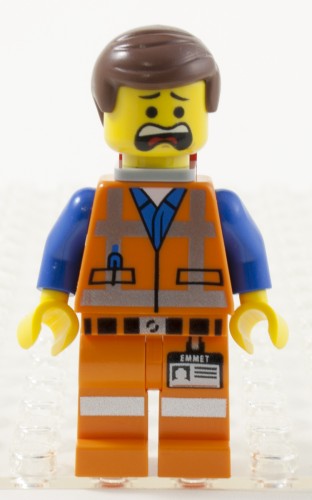 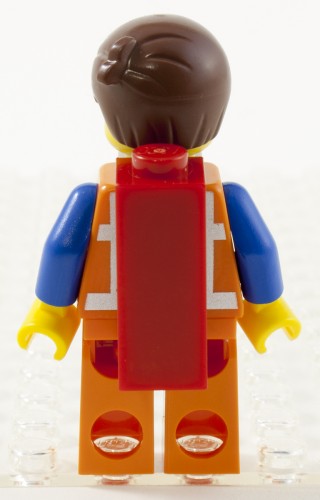 Okay, to be fair, I think the scared-y face is the alt face, but I like that more than the smirk, so it gets bumped up to main status. Plus, that is what the box art gives us. He’s an upgraded construction worker, since he has some chrome printing on the front and back, as well as a name-tag printed on the legs. The interesting thing you get, right off the bat, is that double-height 1×1, complete with a gap to stick on the stud. Apparently, it’s called the “Piece of Resistance.” Oh yeah, this movie is going to 11 on the puns. 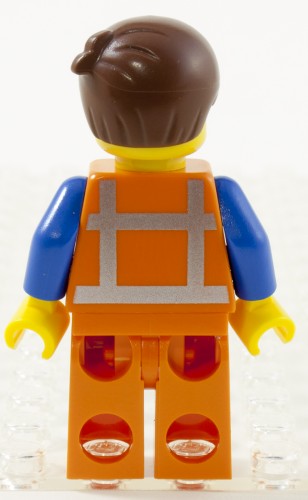 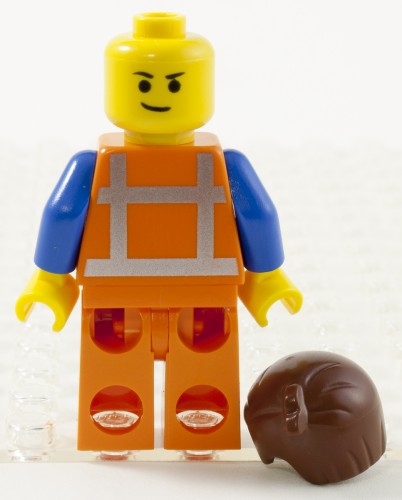 Emmet also gets a unique hairpiece, with a little cow-lick on the back. It almost feels like a blemish when you first pick it up, but it’s obviously part of the mold. Just a strange thing to see after so many years of smooth hair. 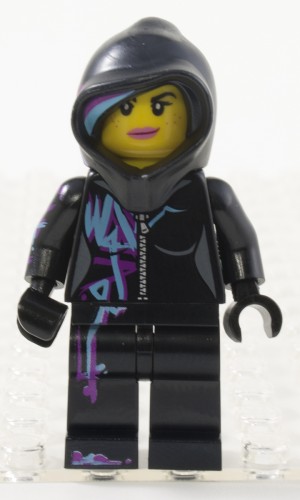 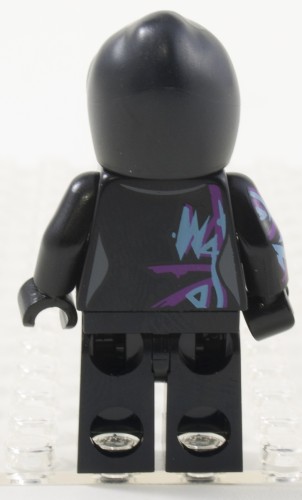 Wyldstyle, even with her extra y, is obviously being set up as the brains. As the father of a little girl (who really wanted these sets to play with… even though she’s not even one-and-a-half yet), I’m glad that Lego is actually putting a female character into their movie and the sets. Apparently they figured out that girls like to play with Lego stuff too! 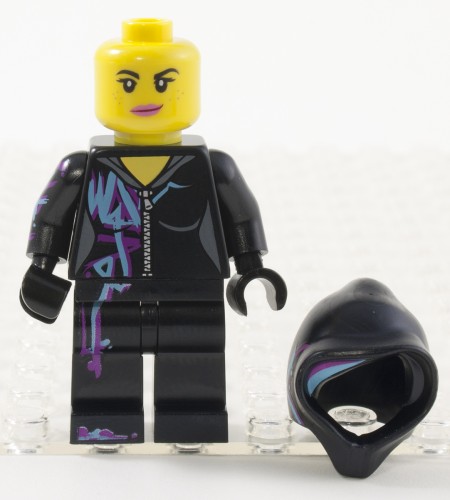 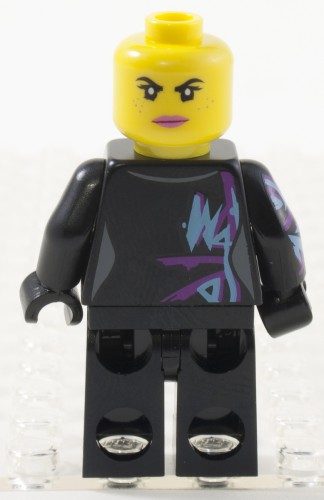 As a figure, she’s relatively simple, with purple and blue in a painted pattern (I think). Her hair is built into the hood on this particular figure, which is going to limit its reuse. That being said, I’m willing to bet we see that general hood design pop up elsewhere, as it’s just too good to leave to one figure. I also welcome (what I think is) a new female minifig head, with freckles and two “almost identical” faces. 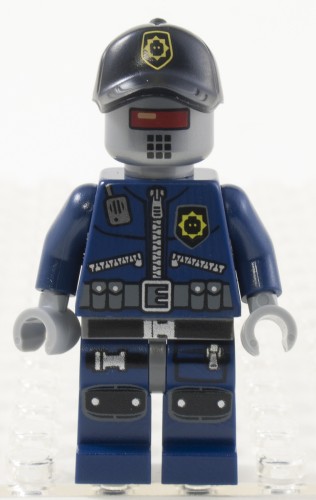 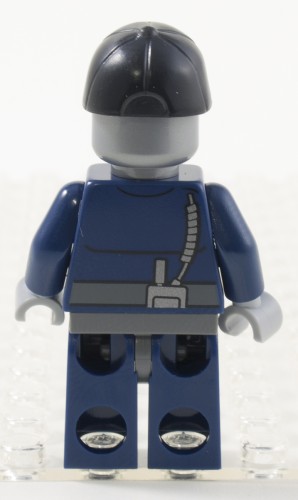 Robo SWAT is a nice little robot, and I’m sure that head is going to pop up the next time we have a contest that involves bounty hunters. He also comes with a unique gun that has a clip for an accessory (though it’s not used in this set), similar to the Dino and Monster Fighters sets. That baseball hat is also going to expand the ever-growing selection of new style hats, something which I just love. Now we can use the old flat-bill hats for Lego hipster minifigs! 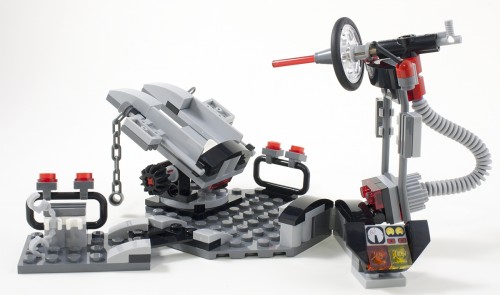 The set is obviously about melting, though “Room” is kind of a misnomer if you don’t have any walls. This is more like a melting “area.” It’s actually not a bad little build, considering the price and size. 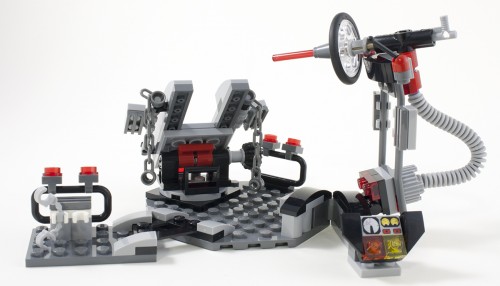 The table is designed to spin around and flip back and forth, and has a couple of small chains to hold Emmet down to blast that brick off his back. I’m actually kind of curious about the brick now… it is something he has, or are they trying to laser off some sort of growth? I mean, this could easily end up being “Minor Cosmetic Surgery” Room. 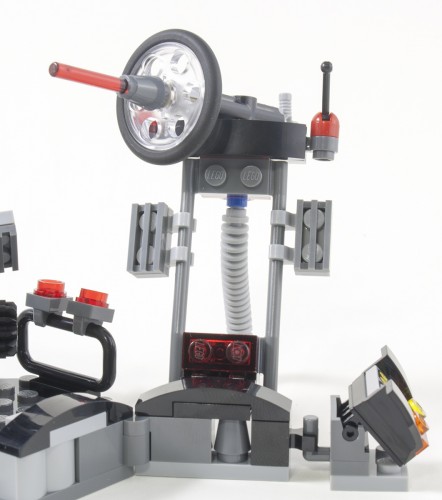 The laser is actually the most interesting build part on this set (well, outside of the A-plate), with the little clear technic wheel, some lightsaber, and a new hose design that makes me want to throw out all my old starfighter hoses and stock up. Seriously, my W-Wing in the alphabet fighter contest would have been vastly better if I would have had access to these, since they had to be removed because I couldn’t get them to stay attached.

This is a small set, only 122 pieces but great value at $13. More than that, let’s look at some of the pieces in this set that add a whole ton of value…

Two short chains, a clear disc, A-plate, new hose with pegs on the end, new minifig gun, 4 short sloped tiles and 4 curved tiles, a round grill brick, a divided L tile, and Emmet’s backpack. All in a $13 set. The minifigs are also fun, and everyone is going to want a team of those SWAT cops. In short, this might be one of the most value-packed little sets in years.

This set captures some of the magic that has been lost in recent years in the small-set range with the proliferation of battlepacks and minifig collections. This is a small set where the value is defined by the parts instead of the figures, and that’s just wonderful. The last set I knew of that delivered this kind of value was the Venomari Shrine back when the “brick” bricks first came out. More than that, the set was fun to build, and did what so many licensed sets never have: they made me want to go see the movie. There wasn’t a single Lone Ranger set that did that, or any of the Pirates of the Caribbean, or Prince of Persia.

That tells me something kind of magic is going on here with these sets… and that Lego has declared war on our wallets.

Verdict: 5 (out of 5). This set is worth every the money and among the best cheap sets we’ve seen in some time…Â 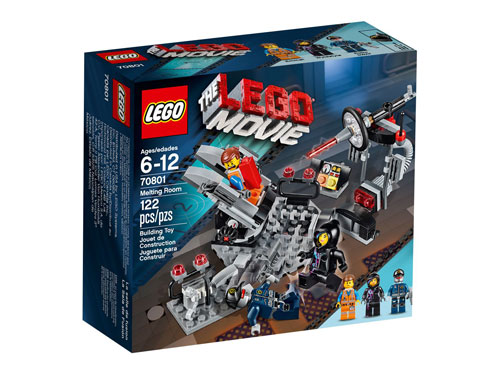