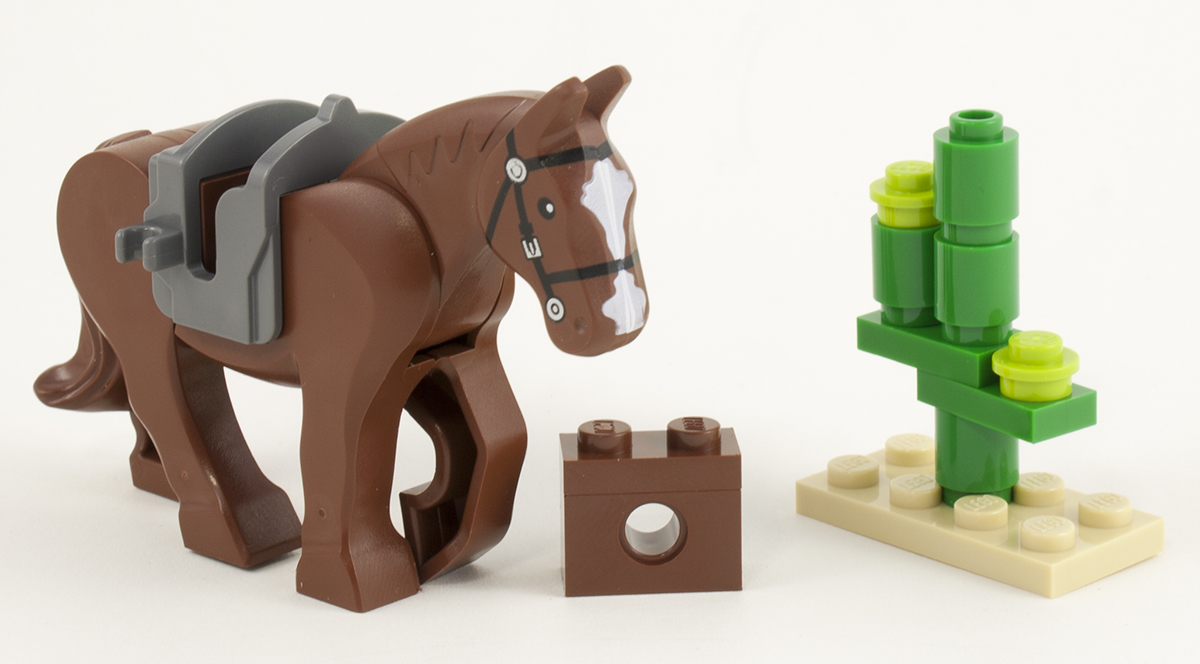 I’ve covered this in reviews before, but small sets are the hardest ones to review. It’s pretty easy to figure out if a larger set is worth the money, either through the number of parts or exclusive value. Small sets, on the other hand, can be tough, since there are fewer parts to draw it, and an “exclusive” figure loses a bit of the polish when getting him costs as much as a couple of combo meals at McDonalds.

Getaway Glider is a glider that includes a couple of robots (one named “Not-a-robot”), a horse, and the glider. There are some interest parts at the first glance, like a rooster in flat silver and small dark brown rounded slopes. It only runs $13, the same as 70801 Melting Room, but is quite a bit smaller, or at least it feels smaller. It has 104 parts, which makes it one of the few sets in the line that dips below the mythical, arbitrary (and often unfair) 10-cent magic number.

So the real question is how does it fit into the line that is going to be begging for so many of our dollars, and is it worth grabbing this one over one of the other sets like it.

I bet I’d feel more up on this set if I built it first, instead of last, in the long line of reviews that I’ve done. It wasn’t one that I’d looked at all that closely, and the pictures I did see lost me as soon as I saw robots in cowboy clothes. I love Western theme, and yes, I’m still bitter that Lone Ranger robbed us of proper sets. I don’t mind robots, but I’ll have to swap out a lot of heads and hands to make these guys work. We actually get three figures here, two Robots and Emmet, because he’s the “Batman” of this line (funny, because Batman is in the movie). 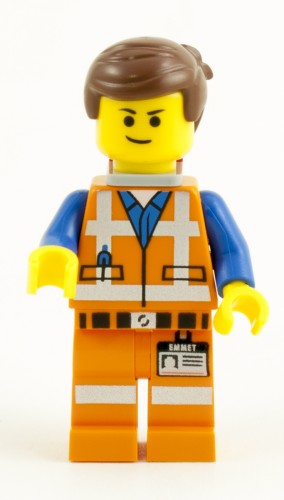 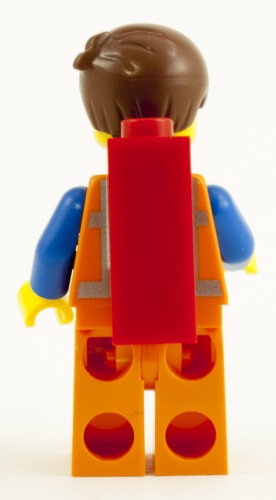 Emmet is still Emmet. If you’re reading this one first and want some opinions on the minifig, check out the reviews for the half-dozen other sets that have him in there. 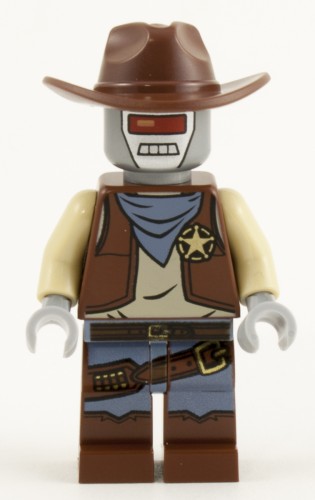 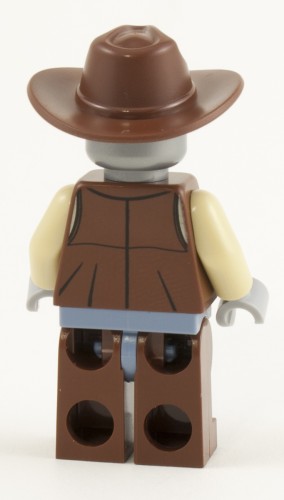 Okay, I’ll admit, reading that this guy’s name was Deputron softened me a little bit to him. I’ll still get rid of the robot part, because it’s just not my thing, but the torso and legs for this guy are just great. Even though they have a western bend, there’s certainly some posibilities for the legs into something else. Also, you could sort of go all Cylon with the head, I guess. 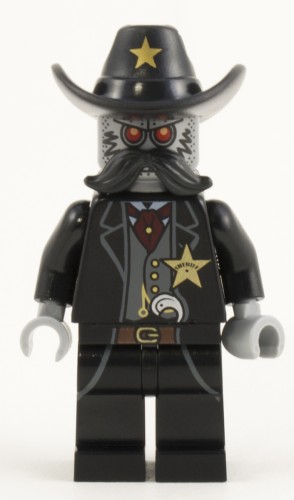 The big bad isÂ Sheriff Not-a-robot, who is obviously not a robot, what with the metal skin and grey hands. He’s actually a great minifig, with an excellent torso and legs, a handlebar mustache accessory (you actually get an extra), and that great hat. My first inkling with this was to swap in a fleshy head and turn him into a Mr. Strickland figure from Back to the Future 3. Okay, yes, his hair was white/blond in that, but we can only hope and dream that they give us that mustache part in a rainbow of colors. 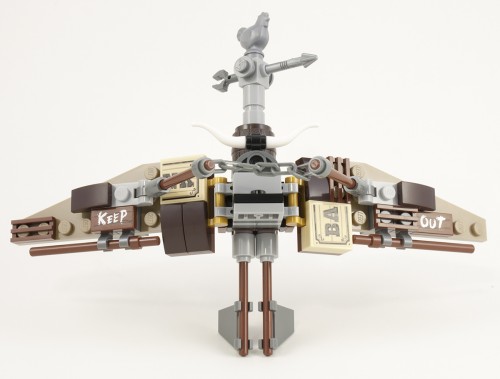 The namesake of the set is the glider, which I suppose Emmet uses to make a Getaway from the western robot killer world. As a thing by itself, it’s mostly slapdash and simple. Pretty much all of the set goes into making this, and it’s not overly impressive. Worse, as it’s designed, it can only hold Emmet with his big red brick backpack on. 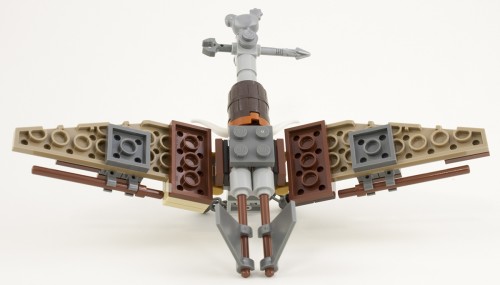 There are some nice parts to it, small slopes, the stickers can be used for a saloon custom, bar-holding pegs, a barrel, the rooster, and a small chain. But everything to it is fairly small, with the two big wings and those brown plates the only thing bigger than a 2×2 (okay, the long staves are longer than 2, but still). When you empty the set, it’s just a couple of small bags and you’d almost thing something is missing. But it’s just a really small set with an inflated piece count.

You also get a horse, which for the first time that I remember, it uses a brick with an axle hole instead of just a solid brick, and some parts to make a small cactus. I can’t quite put my finger on why, but something in the horse I got felt off. It feels slightly lighter than the same horse in other sets. I can’t find any real difference (though the head was slightly lose on mine), but it just didn’t feel quite right when I held it. Could be my imagination, but I’d be curious if someone else with the set (and another of these horses) noticed the same thing.

This set is the same price as 70801 Melting Room, in the same line, with one of the same figures, yet is so much less. Yes, you get a horse, and yes, you get a couple of nice robot cowboys. But for the parts, it’s nowhere near the value at that same price. 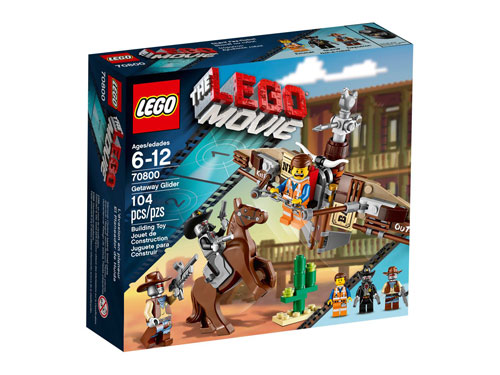