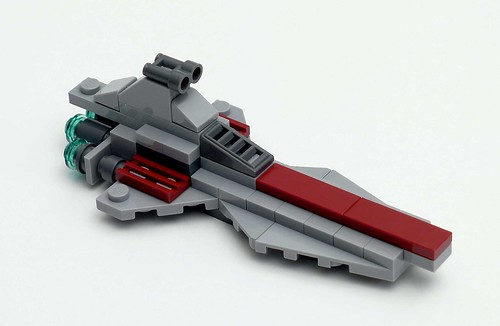 Itâ€™s the latest Target exclusive polybag set and for some reason it isnâ€™t destined for Targetâ€™s seasonal department. No, instead 30053 Republic Attack Cruiser (aka Venator) is relegated to a little hanger by the registers. No matter, as a fan of Mini sets, I naturally picked one up, but I have to admit, I was less than enthusiastic about it. There is something about this set that lacks the draw Iâ€™ve found in other Minis, like the Mini AAT or the Mini Vulture Droid, but what is it? Why am I not feeling it with this particular set? 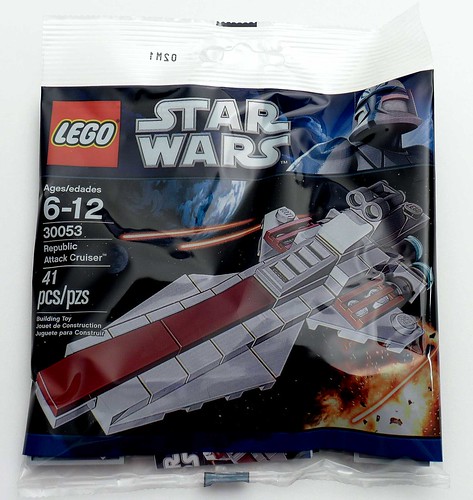 It isnâ€™t the price at $3.99. Itâ€™s not spectacular, but with 41 pieces it comes in around 9 to 10 cents per part and for a Star Wars set, it’s rather refreshing, though typical for this scale. Most of the pieces are small and nothing stands out other than the 1×3 dark red plates, which I really like, but there are only two. They are better than getting one 1×6 tile, which exist aplenty. The rest of the 41 pieces (including ten 1×2 light gray jumper plates) are fairly common and itâ€™d probably be cheap and easy to amass a fleet of these things without stepping foot in a Target. 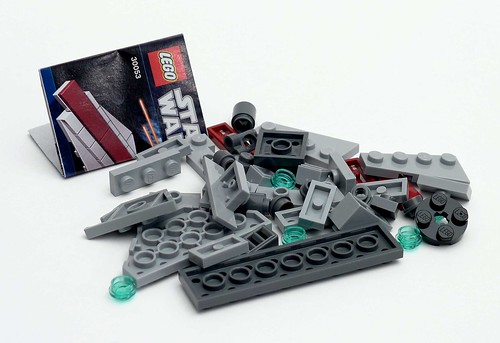 The build looks surprisingly decent for the scale, a massive capital ship distilled into 4 inches. Itâ€™s significantly better than other Mini capital ships like first Mini Star Destroyer (4492) and the accessory Star Destroyer from the Super Star Destroyer (10221). This, despite lacking some defining Venator details such as the turrets or the hangar bays (not that I’d expect them). I like it better than the Brickmaster 20007 Republic Attack Cruiser, but Iâ€™m only judging 20007 by images on the net, so I canâ€™t form a complete opinion on its relative “better-ness.” 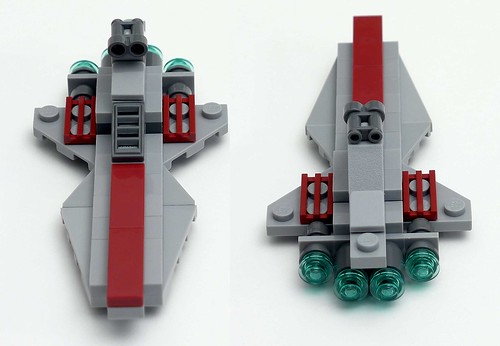 Pros:
+It looks like a Venator Attack Cruiser. When a Mini set manages to capture the look of any vehicle, that’s always a huge plus.
+Itâ€™s cheap. $3.99. Sure, itâ€™s always better to find it on sale or clearance, but who knows when that will be? 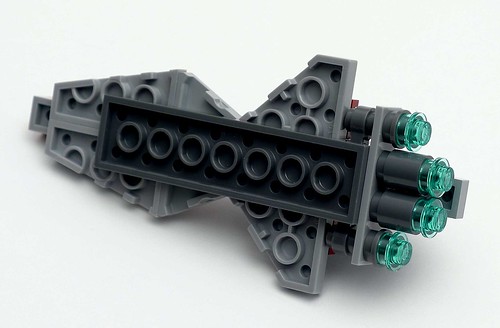 Cons:
-I wasnâ€™t captured by the build. Yes, itâ€™s a Mini, but itâ€™s basic and dare I say, dull. I could build it with my eyes closed.
-For $3.99 you get very common pieces in common colors, with the exception of the 1×3 dark red tiles.
-It feels small, unsubstantial, even for a Mini. It could be because this is a capital ship, rather than the smaller craft that make up a majority of the Mini sets, making finer details difficult.

Verdict:
If you’re thinking up picking it up for the parts, wait until word of a sale or clearance. This isn’t a set to buy for parts since they’re easy to find cheaply elsewhere. Alternatively, if you collect Mini sets and/or Star Wars, this makes a great addition to the Mini line-up, despite feeling lacking, and shouldn’t be missed.