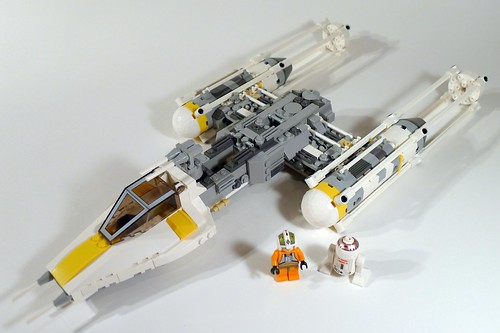 This is how you remake a LEGO set. You begin with a mediocre first try, add a few years, and then start over from scratch with a reference image or model in front of you. Ok, perhaps thatâ€™s a bit harsh given that about eight years separate 7658 Y-wing Fighter and 7150 TIE Fighter & Y-Wing. And technically they are vastly different sets with similar piece counts. My point is 7658 sets the standard for remade models. This is especially so in an era when LEGO simply doesnâ€™t have much left to translate from celluloid to ABS. 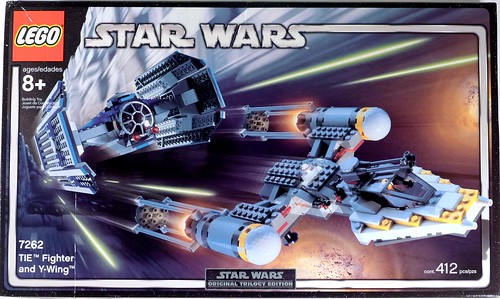 In 1999, you could get two ships for the price ofâ€¦ two ships. The 7150 TIE Fighter & Y-wing was part of the first wave of LEGO Star Wars sets and at $49.99 it was one of the more expensive sets that year. Basically, you got a $20 TIE Advanced and a $30 Y-wing, a most excellent deal for a couple of iconic ships, villain and hero. This originally 409 piece set was re-released in 2002 and 2004. The 2004 version (as set number 7262, box pictured) saw a minor overhaul of the TIE Fighter and a change in the gray colored pieces. For this review, my focus will be on the Y-wing half of this set, with a few comments on the TIE later on. 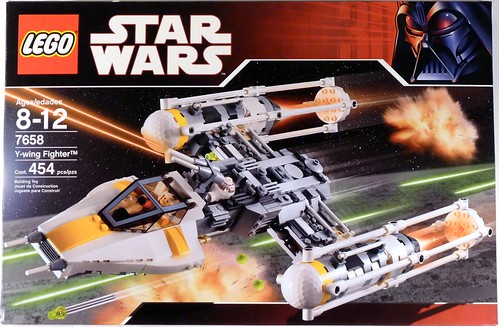 In 2007, after several other ships had already received the remake treatment, LEGO released 7658 Y-wing Fighter. This time it was a $39.99 and just the ship, and boy was it just a ship. The accurate-looking nacelles! The greebling! The cockpit! I was blown away when I initially saw it. I thought it looked better than the UCS 10134 Y-wing (and still do. Itâ€™s the length of the nacelles, mostly). With 454 pieces, this is one of the few sets you wonâ€™t see me complain about price (8 cents per part!). 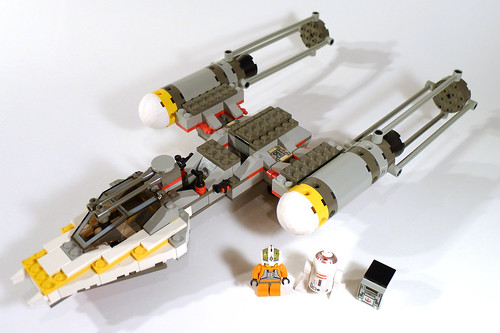 I was never really impressed with the 7150 Y-wing. It was my least favorite model out of the 1999 line-up. Why didnâ€™t I like it? It didnâ€™t capture the Y-wing with any significant accuracy. It has the general shape, some of the colors, but thatâ€™s about it. 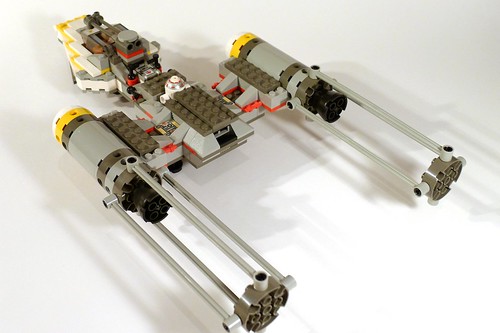 The build is very simplistic, details are limited, play features are limited (not considering the TIE Advanced. Two ships in one set is one of the ultimate play features), and those nacelles. The glaringly incorrect design of the nacelles really killed the set for me, since they are one of the defining features of the Y-wing. 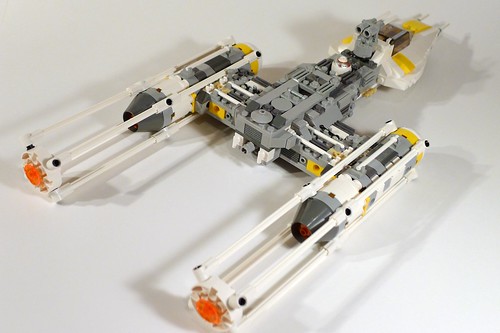 Thatâ€™s why I absolutely adore the newer Y-wing. The nacelles are spot on and theyâ€™re what sold me on the set. There are a handful of things that bother me, such as the bar â€œgreeblingâ€ on the top of each nacelle and the faceted domes, but compared to the previous effort, there really isnâ€™t a comparison. These are infinitely better than the old version, the construction is brilliant, and this represents one of the instances in which a system scale set got something better than a UCS set. 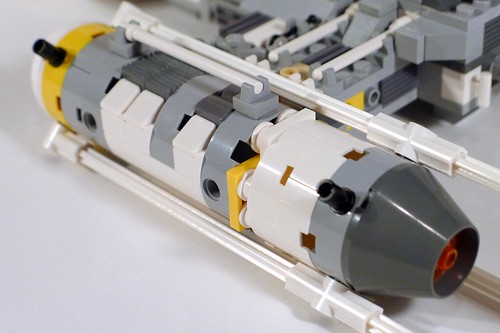 I also appreciate the complexity of the build. I’d say it’s a step more complex then your average system scale Star Wars set. This is due in part to the construction technique of the nacelles, which uses the rounded macaroni pieces stacked offset to achieve the accurate look. Plus the greebling detail. It’s not overly intricate, but it’s pleasing to the eye. You don’t find this much greebling in many Star Wars sets, save for the UCS. 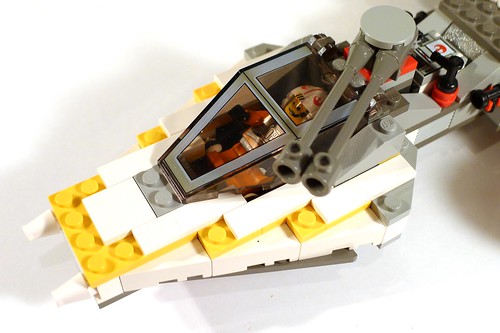 One thing the 1999 Y-wing has going for it is swooshability. Itâ€™s easier to hold than the updated version. My only irritation with swooshing it is the turret above the cockpit. This thing swings like crazy with every movement of the ship. I had to put a couple of bricks on both sides to alleviate the issue. 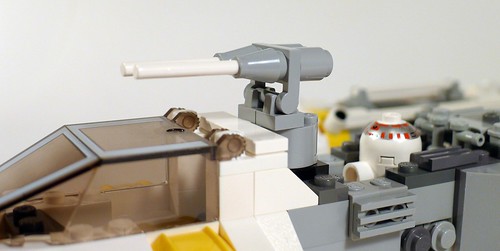 I was disappointed to discover this problem carries over to the 2007 Y-wing. The shipâ€™s still wonderfully swooshable (a tad bit more challenging to hold with SNOT construction on the neck) and the cockpit turret is more pleasing to the eye, but again swings uncontrollably. Another slight modification put an end to the problem (I removed the 2×2 cylinder). 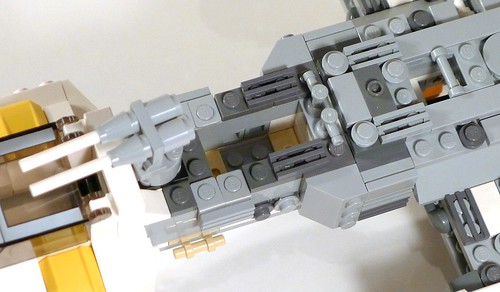 Aesthetically, the visually weak point of the ship is the droid socket and the surrounding area. It never looked quite right to me. It doesnâ€™t have much to do with the droid sitting sideways. I donâ€™t have a problem with that, since it prevents serious stability issues with the design. The problem is, itâ€™s too narrow, but since the modelâ€™s slightly shrunken scale, I canâ€™t think of any practical way to make it look better. Ideally, any future version of this model should be proportionately larger. The Y-wingâ€™s a bulky vessel. Of course, with greater sizes comes greater cost, but if it somehow manages to look better than 7658, then Iâ€™d say it’d be worth it. 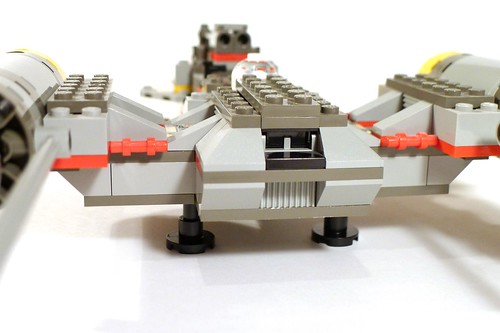 One of the more glaring aesthetic issues with the old Y-wing are the splashes of red everywhere. This was a problem in many early Star Wars sets, with LEGO insisting on adding colors such as blue, yellow, and red to ships that were predominantly gray. I think it had something to do with making it easier to pick out parts when building. 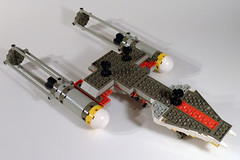 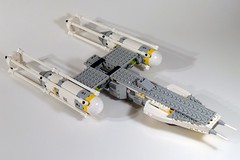 I donâ€™t want to harp on the underside of these ships too much since the non-detailed construction is the norm. I donâ€™t like either of them. The red plateâ€™s an eyesore on 7150 and the lack of white to denote hull plating on 7658 is one of the glaring inaccuracies of a finely presented ship. Also, the “landing gear.” It’s not that hard to come up with something a bit more appropriate is it? I don’t care if it retracts or not, but at least make it look presentable. 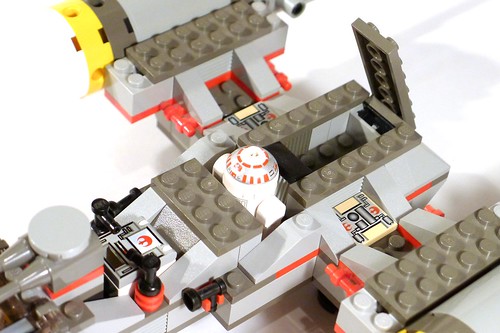 The old Y-wing has two cargo compartments, one directly behind the droid and a cargo container in front of it. I miss the cargo container in the new Y-wing and the printing on the container door, the conspicuous Rebel insignia screaming, â€œThe stolen plans are in here!â€ That container and the two printed tiles on the pylons make up for some of the overall lack of detail of the otherwise plain model. Speaking of print tiles, neither set contains any stickers, only the very few printed parts you see throughout the images. 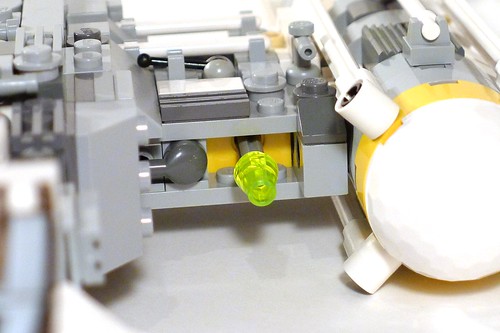 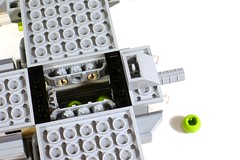 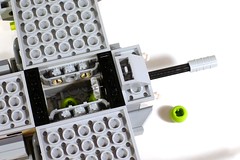 Far and away the worst thing about the new Y-wing is the bomb compartment. Itâ€™s not a bad play feature and the lime green â€œbombsâ€ are easy to spot should they fall on the floor during a bombing run (if you donâ€™t have lime green shag carpeting). The sliding mechanism you pull to release the bombs is the problem. Itâ€™s loose and itâ€™s easy to spill your ordinance prematurely. I canâ€™t tell you how many times Iâ€™ve done this while testing the swooshability of the set. Itâ€™s amazing I havenâ€™t lost any of the pieces yet, at least, that Iâ€™m aware of. 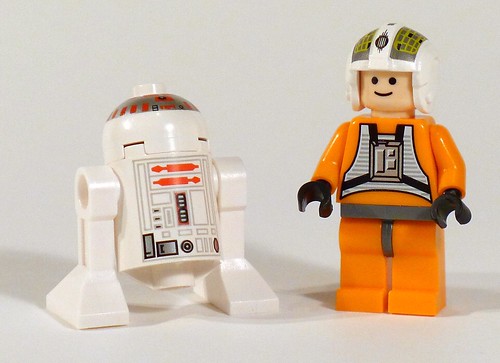 Minifigure-wise, this set has the minimum required to make logical sense: a pilot and droid. Neither figure is spectacular in any way: a generic, inaccurate R2 unit (er, R5-D4), and generic Rebel pilot. I suppose someone went out of their way to call him â€œDutch Vander,â€ but thatâ€™s not on the box, I had to look it up online. If all he gets is a simple smile, you canâ€™t get any more generic as far as licensed LEGO sets go. The only highlight of the minifig is the grid-like helmet printing, which is exclusive to both Y-wings and a magnet set. I would have appreciated an additional minifig, support ground crew, alternate pilot, anything to make up for the blandness.

The minifigures fare better in the past. Here the Rebel pilot isnâ€™t a generic smiley. It isnâ€™t a unique face either, but at least LEGO tried. The droid is the same inaccurate R5-D4, a.k.a, red R2-D2. I didnâ€™t mind the inaccuracy when the Star Wars line was starting at the end of the 20th Century, but given the evolution of the licensed minfigs over the last decade, it was inexcusable in 2007 (and certainly in the future, but I donâ€™t think is should be much of a problem anymore). Also, 7150 saw the LEGO debut of Darth Vader. He was fantastic then, eyebrows and all, and heâ€™s still pretty neat now, but now since Iâ€™ve got about a [hyperbolic number] of him, my current impression is somewhat diminished. 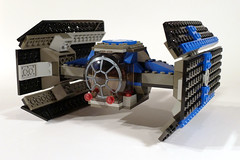 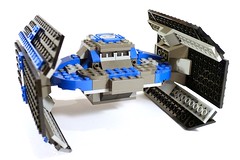 I really donâ€™t have much to say about the TIE Fighter portion of 7150. Itâ€™s simple, about as accurate as it’s Y-wing companion, and itâ€™s been updated two or three times. In 1999, I thought it did its job well. It is instantly recognizable as Darth Vader’s TIE Advanced, but it’s been replaced by 2009’s 8017 Darth Vaderâ€™s TIE Fighter, which is a way better representation. Would I have bought this set (or the Y-wing) if it was packaged on its own? Well, yes, I probably would have. 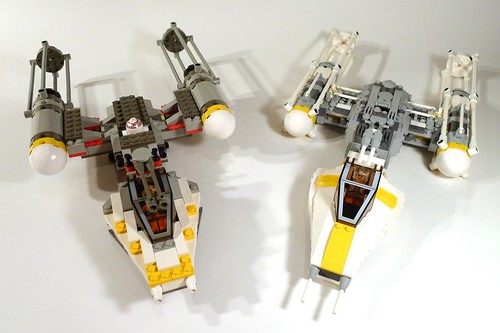 7658 is a set I regret not getting more of. I enjoy it and itâ€™s become one of my favorite sets from the Star Wars line. Iâ€™m also impressed by the overall variety of pieces, which factors into that regret: it has a great part selection. Given its relative prominence in the Original Trilogy, itâ€™s only a matter of time before the next iteration of the Y-wing shows up in stores, but with the trend as it is, I donâ€™t foresee the same incredible value. 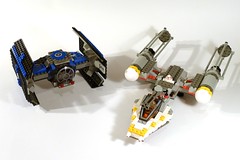 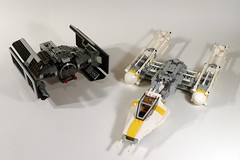 At this point, 7150 TIE Fighter & Y-wing is for someone who really desires to complete their collection, while 7658 Y-wing Fighter is a must have for any LEGO Star Wars enthusiast. I had fun with 7150 when I was 13 and hyped out of my mind on Star Wars, but we’ve come a long way since then. Both sets are fairly easy to find on the secondary market without exorbitant prices, but at the current rate of set updates, it might be better to wait. If you’re looking to add a Y-wing to your collection now, go for 7658, itâ€™s worth it, even if you have to pay more (within reason, of course) than the $39.99 MSRP. Just pretend youâ€™re paying todayâ€™s prices.