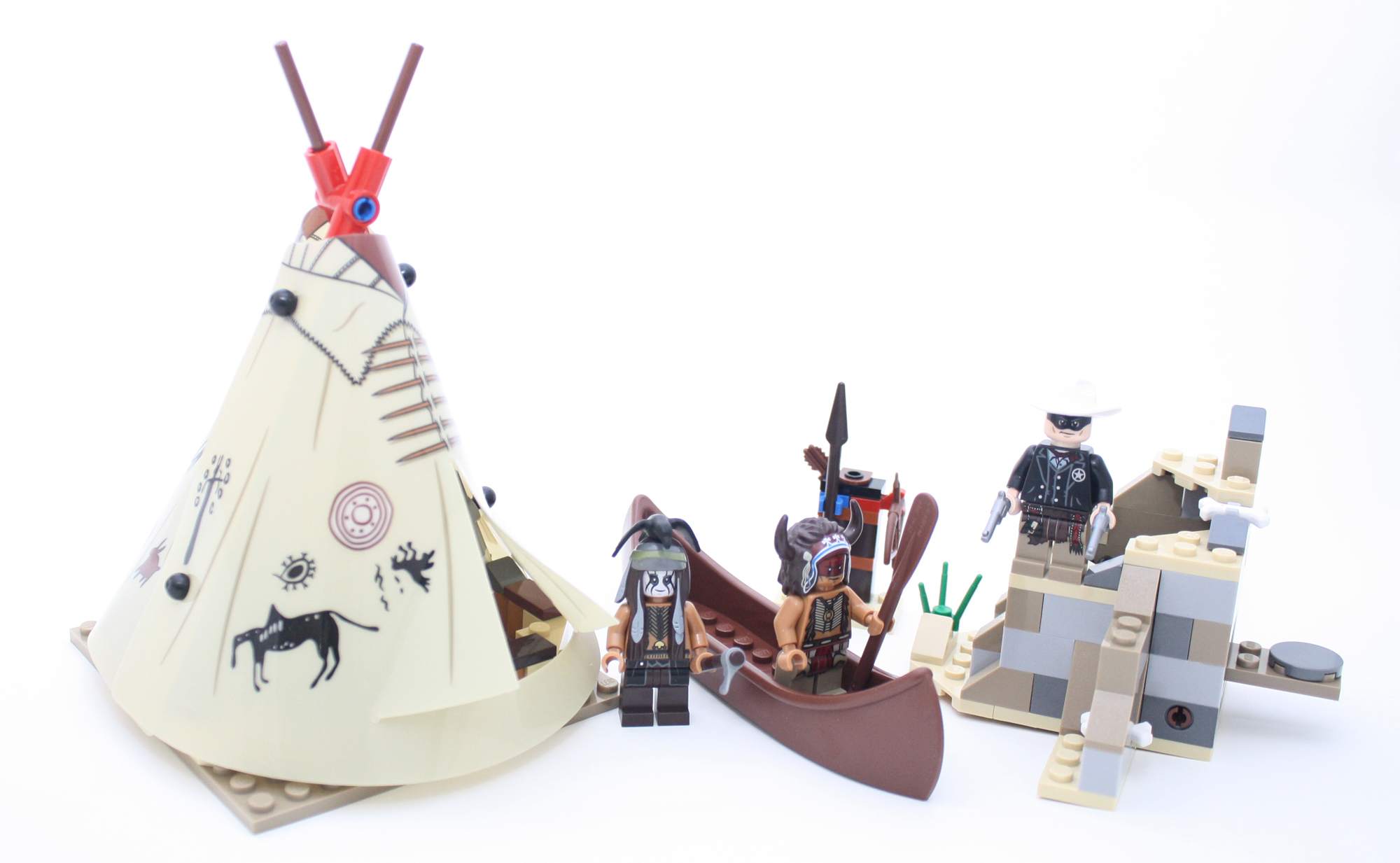 Unfortunately, The Lone Ranger bombed out of my local theaters before I had a chance to even consider seeing it, so most of what I have to go on in the movie is jokes from late night talk shows and the trailer I saw once before Iron Man 3. That means that, sadly, my jokes for this review are going to focus on the audacity of Johnny Depp in red-face. I’d like to fall back on making jokes about the TV Show, but somehow, I missed it despite a childhood wasted on Nick-at-Night.

Okay, to be fair, I never had any intention of seeing this movie, but something about these sets caught my eye when I saw them on the shelves. I’m not one for reading spoilers or leaks, unless they’re news on the site, so I hadn’t done much to look at these sets before they showed up at Walmart alongside the Man of Steel and Iron Man 3 stuff.

So, on a whim, I picked up all of the sets up to the Colby City Showdown (my fellow author, cas, will be working on reviews for the Cavalry Builder and the Stagecoach, while I’m handling this one and the said Showdown). At $20, 161 pieces, 3 minifigs and a whole lot of scorpions, this set seems to have a lot going on when you check out the box. The question is, does it hold up once you put the thing together?

While the movie may have bombed, I’ve been decently impressed with this line for its overall quality and genuine “fun” that comes along with it. Maybe part of it is that I missed out entirely on the Western line that was out in the late-90s (and don’t remember ever seeing the re-released versions in 2002). Maybe it’s because I like unique parts (I bought like ten of the Prince of Persia ostrich race sets). Or maybe I used up all of my irrational hatred of the Pirates of the Caribbean line. At least this set is supposed to have a canoe, unlike the $120 Queen Anne’s Canoe. 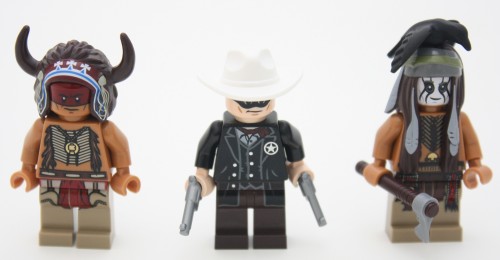 We get three minifigures in the set, The Lone Ranger, a “not-at-all-a-racist-caricature” Tonto, and Red Knee, who was actually played by an actor of Comanche decent. While that doesn’t make Johnny Depp as Tonto any better, I will acknowledge that they did cast real Native American actors for a lot of the roles in the movie… just not the most important one. It’s kind of like making a Last Airbender movie and casting a white guy in the… oh, wait.

But this isn’t about the movie or Hollywood’s inability to recognize history or diversity. But you know me, my brain lives for the diversion in a review. 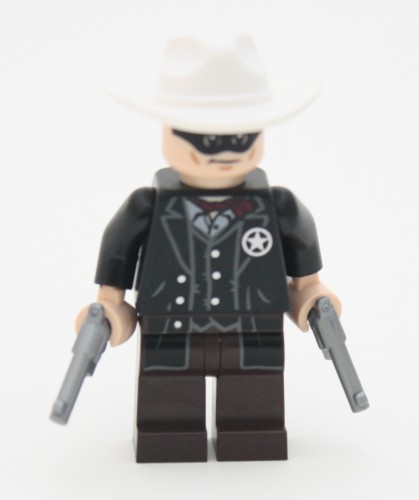 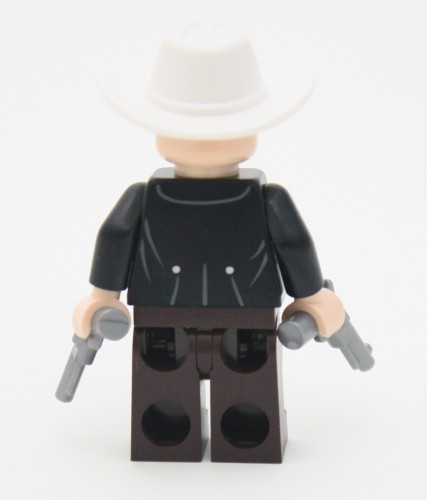 The Lone Ranger is identical across all of the sets. Printed legs that extends out his jacket (but only in the front), a badge, scarf (or is that an ascot, ala Fred Jones Jr.?). Almost all of the figures in these sets (save the Native Americans) don’t have an alternate face, as they go traditional LEGO, using standard hats and no special hair. I like it, that’s a great touch for the collector who wants to expand out his choices for faces.

The hats and revolvers are also great, though I’m having trouble seeing much utility in having more of these particular legs and torsos. I’m sure someone will come up with a great idea for them though. 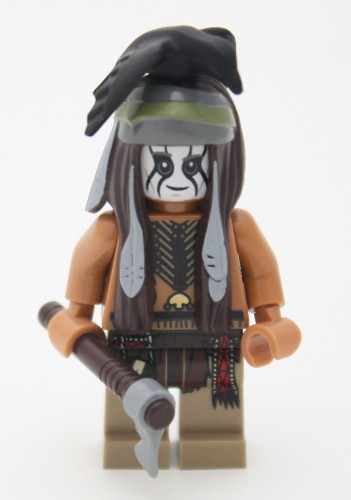 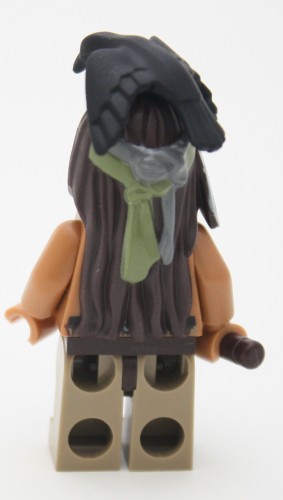 Captain Jack Tonto is a much more stylized figure to match the over-the-top character in the movie. The hair throws back to the hairpieces in the Pirates of the Caribbean sets, and it’s not a big stretch to picture the Captain Jack (especially the one from The Cannibal Escape), but maybe that’s just me. His hairpiece has a spot for a crow (or to swap in a tiara, if you feel so inclined). 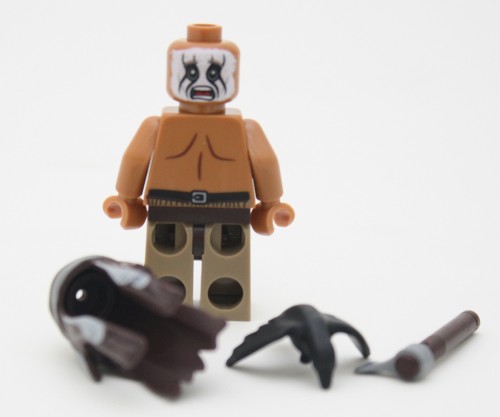 He does come with an alternate, surprised face. Someone that’s seen the movie will have to tell me if it’s accurate, because all I saw in the trailers and previews was that same indifferent face that showed no emotion or fright. 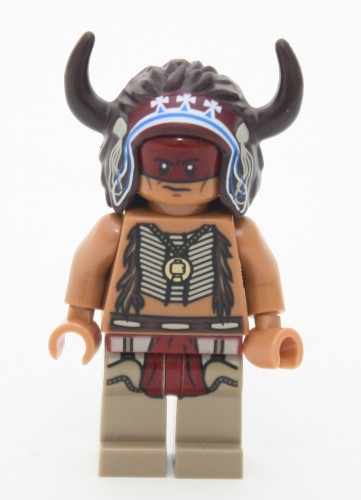 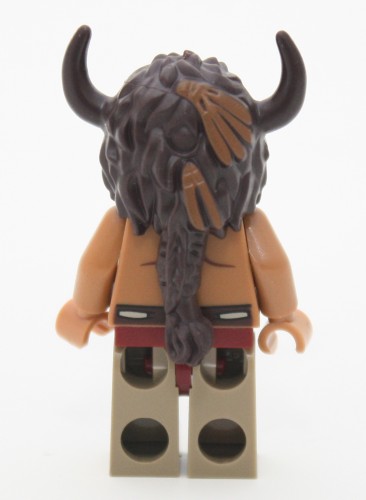 Red Knee is the last minifig in the set… I’d love to tell you something about him, but given that I haven’t watched the movie and none of the trailers actually hinted at the fact that there were other Native Americans in the movie. A quick jaunt around IMDB tells me that Red Knee is played by Gil Birmingham, who apparently was also in the Twilight movies. I wanted to put a joke here that talked about one of my fellow staff-member’s fanboyism for that series, but couldn’t decide on which one to inflict that on.

As a figure, he’s pretty nice, and has a bit more of a generalized look than the more stereotypical Native Americans we got in the old western sets or the collectible minifigs. I have no idea where I’d ever use that hairpiece, but I could think of uses for the legs and torso. That being said, I welcome the challenge of throwing up some buffalo horns… 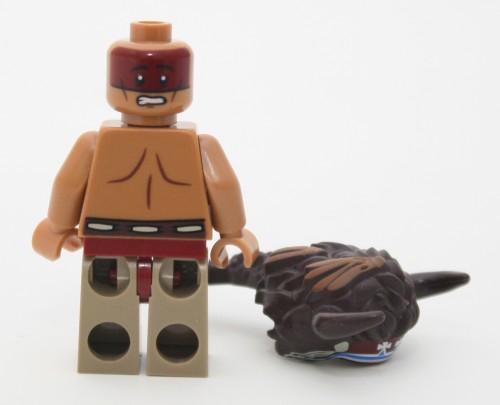 He does have an alt face, and it and the regular face highlight the only slight beef I had with the figure, and that’s in the red printing. It may be totally accurate for the movie (IMDB doesn’t have a picture, and occasionally, I just get too lazy to Google), but that limits what you could really do with it. Face painting like that is accurate for Comanche warriors in general, so that’s cool. It also looks kind of strange with the line printing not changing when the rest of the facial expression. 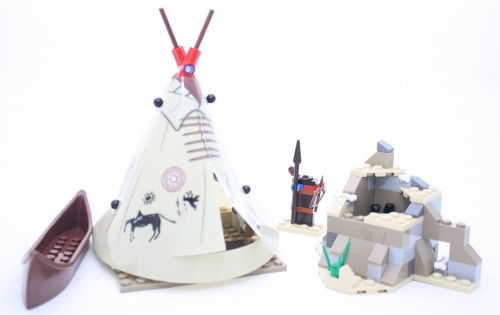 The set itself is really what sets this whole thing apart. It’s really just a collection of a few different pieces, a canoe, a tipi, a small weapon rack, and the bane of anyone who’s ever traveled in the desert, a scorpion launcher.

I absolutely love this little canoe, which is a throwback from the original Pirates and Western sets. I love that they didn’t feel the need to make a new mold for this, and just reused what was already a great part. Just now we get it in reddish brown. 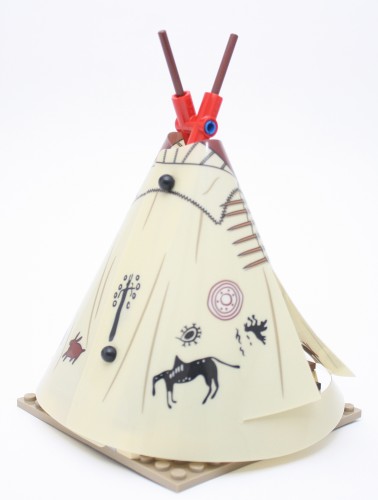 The centerpiece of the set is obviously the tipi (also tepee or teepee, if you prefer). While it looks really cool, my big beef is that a tipi should have a tripod base structure (with the addition of smaller poles to add more structure to the outside). I’m sure, somewhere, there’s a scout leader or elementary school teacher that would be glad to know I remembered something about Native American history. I’ve actually set up a tipi before… and spent time inside one.

I wasn’t sure about the paintings on the outside of the tipi, which is made from two plastic pieces (the same material we see in the new sail barge sails or on Geonosian wings, if you were curious). I grew up in an area that actually had several reservations, and when my scout troop had a guest speaker come to explain the tipis to us, they were all undecorated hides. Looks like that was just a thing for the more northern tribes (Sioux, Omaha, etc).

For the Comanche, which is what Tonto was updated to in this version (I assume because it sounds cooler thanÂ Potawatomi, which is what he is in the original series… thanks, internet), the painting outside is actually fairly accurate to more traditional designs. I get that LEGO is basing this on the movie designs (I presume), but it’s nice that the movie took some keys from history. 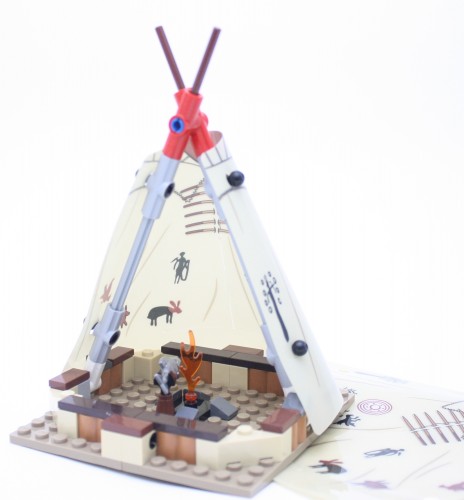 The inside of the tipi is held up by a technic pole system (and like I said, missing at least one), along with a fire placed in the center along with a fish. The fire is pretty much just some cheese slopes and a basic flame brick, nothing all that fancy, but a tipi like this would typically have something like that in the center. Other than that, it’s just an interior to put some figures. 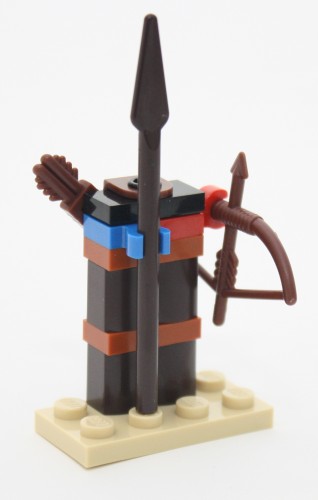 Â The weapon rack is a weapon rack. I really don’t have any good snarky comments for this… it’s just some filler parts. 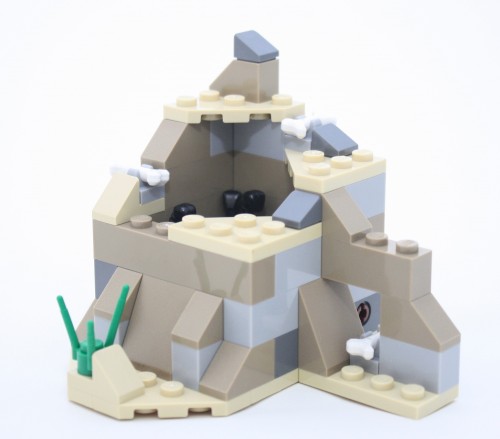 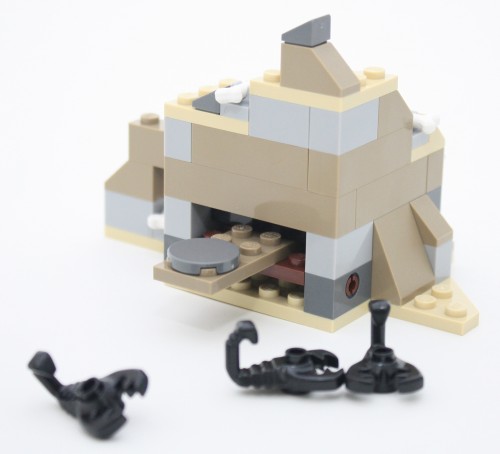 The last piece is a playset piece, and for this, I’m going to have to ask one of the three or four people that actually saw the movie if there’s anything in the movie that involves scorpions flying out of a little hill. That in itself is odd, as scorpions are generally not all that dangerous (at least not in the US), and are far more prone to hide than to attack. They’re like bees, and only attack in defense. There’s a little launcher that flings them out, which itself is an odd playset feature.

To be honest, I wish pretty much all of the pieces of the scorpion pit would have been put into making us a better tipi. While the set as a whole has quite nice value, coming in $20 and a variety of pieces, including some nice dark tan slopes. What it is missing is a horse or two, which would be far more in place at a Comanche camp, or better yet, a bigger tipi (those things are a lot bigger than you’d think). But you get the canoe, and that alone made me want the set.

Verdict: If you like the whole western motif, pick one up. It’s worth $20. You can get Comanche Camp, and the rest of the Lone Ranger sets, at Amazon.com.