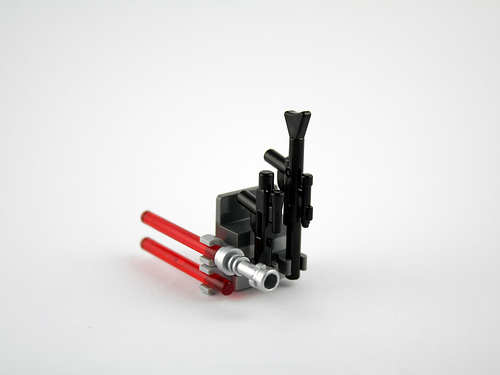 Oy vey. The MTT’s looking a bit better today. I’ve already said that I think each fig should come with their accessories, so that basically makes today total write off. At least the Gungan one had a function of its own to give it purpose beyond being a weapon rack. Two guns doesn’t even arm all the figs we’ve found up until this point but the spoilerish inclusion of the double bladed red lightsaber indicates that this will furnish future figs as well. The security droid needs a blaster, so either the Imperial Officer has no need of weapons or the Rebel Trooper’s Laser Turret is all he’s going to get. The rack is efficient if pointless, but it just feels like a big cheat. I’m not naive, but it bothers me when they tip their hand by including accessories for upcoming figs, even if said fig is featured front and center on the cover. Don’t even get me started on the method of storing the lightsaber.