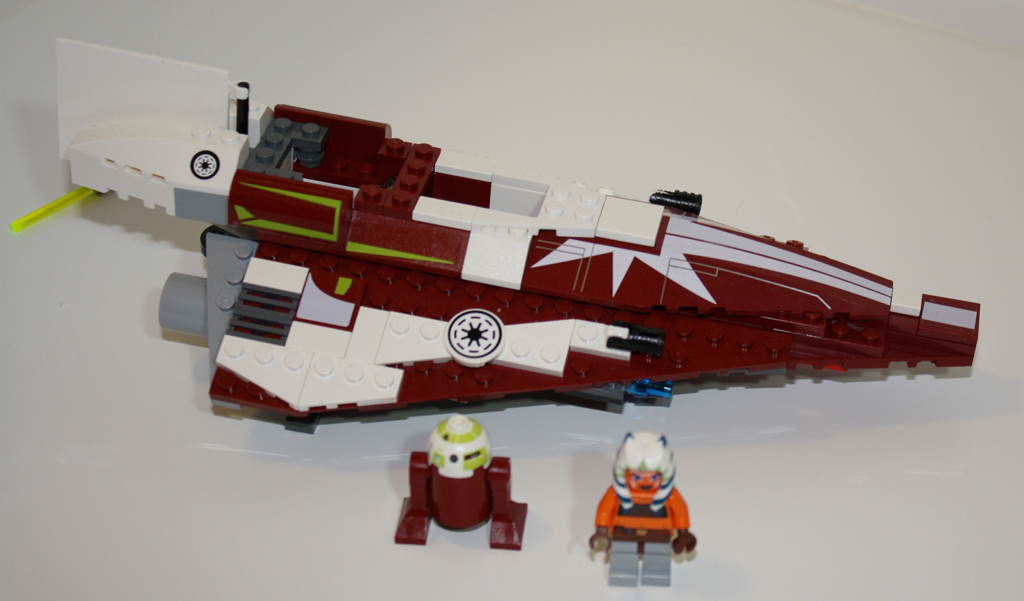 DéjÃ  vu: the feeling or sensation that you have done something before. Long had I thought such a feeling was a myth or simple rationalization to the human mind’s ability to recognize patterns. And then I picked up 7751 Ahsoka’s Starfighter and Vulture Droid, and throughout the process, had a feeling that could only be called déjÃ  vu. Okay, let me preface this whole thing with one comment- I like this set, I bought it because I wanted the Twi’lek that isn’t a Twi’lek (I have a theory about that, it’s because George Lucas wanted more money, and can make more action figures). The droid is slick and unique (guilty confession, but I love the R2 droids- not talking Don’s in-the-bushes-with-binoculars level here, but seriously, who can’t love these guys). But there are three of the large Jedi Starfighters (I’m sure there’s some official name for these – I don’t care) and three of the small ones (okay, four, but two are the same yellow one) at this point. 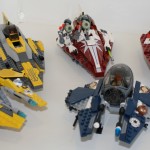 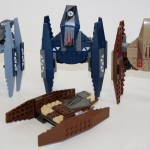 I don’t have Obi-Wan’s RotS starfighter, but if someone would like to send me one, contact me and I’d be glad to provide an address. Not just that, but at this point, we’ve also had a few different Vulture Droids, the other half of this set. 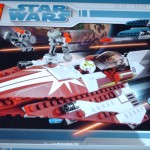 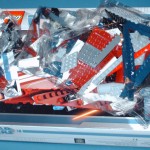 Luckily, I had a helper throughout this whole process, a mighty beast capable of felling a Sith Lord (as my chewed up Palpy figure attests to). Anyway, the build itself was somewhat anti-climactic. I’ve done this before, and there’s not much more to add to the whole thing. 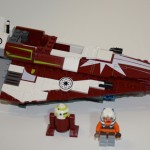 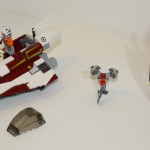 Parts selection for this set, like a lot of the Clone Wars sets, are fairly good. Lots of Dark Red is always a plus. A good mix of wedges, bricks, and plates, gives some extra value to the set. There are several stickers (see complete pics below), and just two printed blocks, the big slopes that make up the upper body. What’s somewhat sad is these would have been the best piece to have un-printed and stickered, since they can have a place on so many builds. Tiles are a dime a dozen anymore, but these are unique giant slopes, and plain colors are always better in my book.

The starfighter does take a few diversions from the Anakin’s Starfighter it’s obviously inspired by, both in shape and look. On the surface, they look somewhat identical, but Ahsoka’s wings have more detail, the fusilage section is longer (owing to the printed bricks that are much longer than the simple slopes used in Anakin’s starfighter), and the rudder/flag is unprinted on this one ($40 set and we get a plain white flag? for shame…) The biggest change, however, is the addition of a “firing” mechanism to the underside of the ship. Like Anakin’s starfighter, Ahsoka’s is armed with the push-fire technic missiles. I guess they were too hard to fire on Anakin’s shuttle, so now, we’ve got to have a “T” to fire them both (no one-firing type shenangins here). 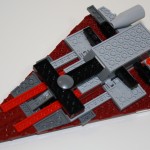 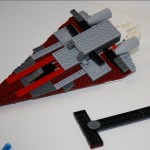 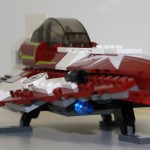 When you’re putting this set together, you might think, what in the heck am I building here? A giant LEGO hammer? What does this have to do with a Jedi Starfighter. I’ve built enough of these things that I could probably hit the garage and start fabricating a real one. It isn’t clear at all, because you build this thing and then go back to building the ship, equally confused and wondering if LEGO was just toying with you, and they’ve reverted to Ep II sets, where you just put things together for the heck of it (See Yoda – Dooku duel set).

Eventually, you put the belly of the ship on, and slide the T into place. It’s held in place by… well, nothing, at first. Once you put on the wings and missile holders (standard axle holder plates). It’s held in place by the slope and the missiles (and when the missiles are gone, the axle plates). Does the T do a better job than your fingers in firing the missiles? Not even a little. It’s a new kind of excessive overkill. Oddly, this whole “building your own parts” thing has been a theme in the newest Clone Wars set. The Republic Attack shuttle makes heavy use of this building style, though to much better effect. 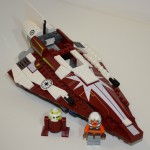 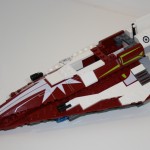 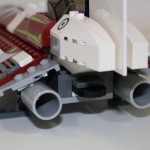 There’s one thing I have to give a special bit of attention to here. LEGO’s “recomendation” on how we store the lightsaber. Remember how the X-Wing had that little cargo storage section, and anakin’s Ep 3 starfighter had the spot next to the cockpit? This set wants you to do this. Seriously. 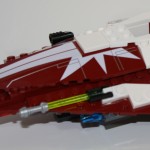 That’s right… you’re supposed to put it blade end first into the blaster. Minifigs, the whole reason that I bought this set, after all. Ahsoka is the centerpiece figure, and she should be. A unique figure with a solid headpiece, not one of those rubbery numbers that graces most of our new figures these days. A new “not chrome” lightsaber rounds her out, though part of me wonders why she has brown hands (gloves?) and why her top is only on the front of her torso, not the back. I rmember another Twi’lek that had that sort of arrangement… it didn’t work out well, she flashed her goods and was eaten by a rancor. 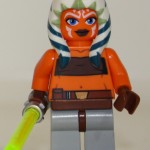 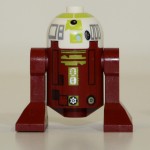 The R2 droid adds to a long tradition of nice looking printed droids. The colors are good, and compliment the fighter well. It’s always great to have more astromechs. The buzz droids… however… okay, these things are 75% nifty. They look the part, but they’re solid, rigid, and the whole saw on the front is just absurd. I mean, come on, look at it. It’s the size of the rest of the droid. Take a look at the picture below. I’m not expecting it to match, but that’s just sad. I also know it’s the same as the tri-fighter buzz droid, but come on, they could have done something to fix it.

As for the vulture droid part… well, what is there to say that hasn’t been said in the Naboo Starfighter review? It’s pretty much the exact same thing, just in blue instead of brown. 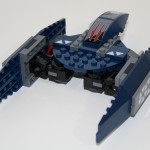 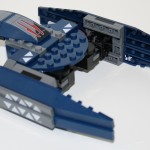 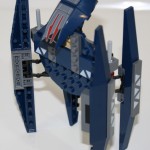 This set comes in pretty close to Anakin’s Jedi Starfighter and the Vulture Droid from the Naboo Starfighter. While they’re both somewhat tired designs, they’re also solid and tested. I’m giving some bonus points because it has Ahsoka, but this is really just a continual rehash of earlier sets.

It’s getting dinged though in my “tilt” section here… simply because this is a “been there, done that” sort of set. It could have been really fun, but it wasn’t, because the entire time I felt like I’d done it before. It’s swooshable, and a good toy for kids, and collectors will buy one for completeness, but there’s not much of a reason, outside of the figs, to get this set over, say, Anakin’s Starfighter.