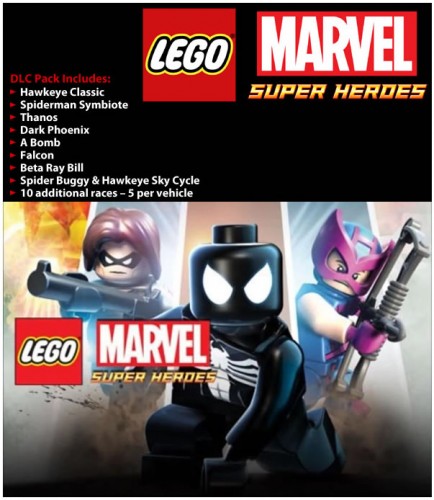 We have two updates to bring you regarding LEGO Marvel Super Heroes. The first update isn’t quite “new” since it was announced sometime ago, but the first DLC pack has been revealed. BrickHereos has uncovered an image showing you three of the DLC characters: Hawkeye Classic, Symbiote Suit Spider-man, and I have no idea who the gun wielder is. Maybe Ken knows. See the image above for what you’ll be getting. A cursory search shows that the DLC pack is available from EBGames Australia so far as a pre-order bonus along with Iron Patriot. Lucky Australians!

The second piece of news comes via IGN. It’s a preview article of the game that gives details on how you can unlock the Stan Lee character:

Stan Leeâ€™s groupies, for example, wonâ€™t be able to unlock the comic book icon by simply sticking to the critical path. As Parsons explains, recruiting Spideyâ€™s co-creator into your roster is one of the titleâ€™s most involved tasks. â€œWe have 50 Stan Leeâ€™s in various perilous situations. In one of them he drinks this toxic soda and transforms into Stan Hulk, and you end up having to beat him up; when you beat him up, he transforms back to Stan and heâ€™s like â€˜Excelsior, thank you!â€™, and off he runs. Once youâ€™ve rescued all 50, you then get to unlock Stan as a playable character.â€

Sure it sounds easy, but I’m guessing the other 49 missions vary in degrees of difficulty and may require replaying the game to use unlocked characters.

There are some other details on some of the story elements and how the characters’ traits influenced some of the gameplay.

LEGO Marvel Super Heroes releases next month on all major consoles. A few pre-order options are up on the right column there under Iron Patriot.