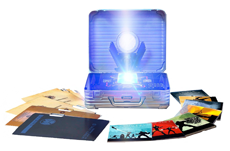 So, the Avengers movie comes out on DVD/Blu-ray today, and if you’re like me you’ve been paralyzed by the myriad of purchasing options that are out there. I guess that’s one benefit of getting that suitcase 10-disc set that’s not coming out ’til the spring: you can buy it, be done with it, and not have to worry about missing out on any extras or goodies, ’cause anything else would pale in comparison. I think that whole lawsuit is really going to hurt the 10-disc edition sales as I can’t imagine a lot of people waiting long enough for it. The only other version that really appealed to me was the steelbook case that was a pre-order exclusive to Best Buy, but I totally found out about it too late so my chances are nil on getting that one. So now I’m stuck in circling pattern trying to figure out where to throw my money at to buy the movie. Having recently done a garage sale where I sold off a good majority of my DVD’s, I’m thinking digital’s the way to go, but you don’t get the cool extras like you can get with the Target 2-disc special edition version of the release. Rumor has it that the 90 minute bonus disc is the same bonus content you get with the 10-disc set. It’s only $19.99 and it comes with 2D Blu-ray and DVD versions of the movie. No digital copy but I suppose that’s what Handbrake’s for.

In other news, to celebrate the release of the movie, Amazon has price matched Target’s sale prices on the LEGO sets based off the movie. The best deal is 6869 Quinjet Aerial Battle, down 14% to $59.99. Full list is below: