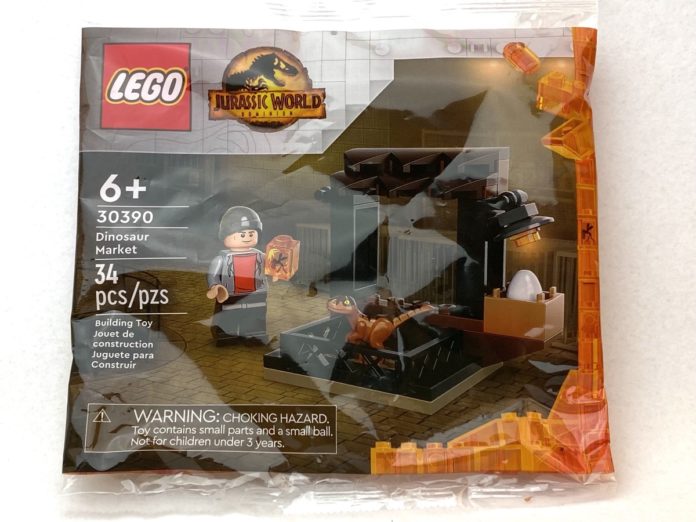 Wow! The big 100! Here we are with barely a hiccup in the schedule. One hundred polybags down with one hundred sixty to go. I think the next big milestone will be in another month and a half when we hit the halfway mark. But for now, let’s take a look at today’s polybag, 30390 Dinosaur Market, another acquisition from Target. 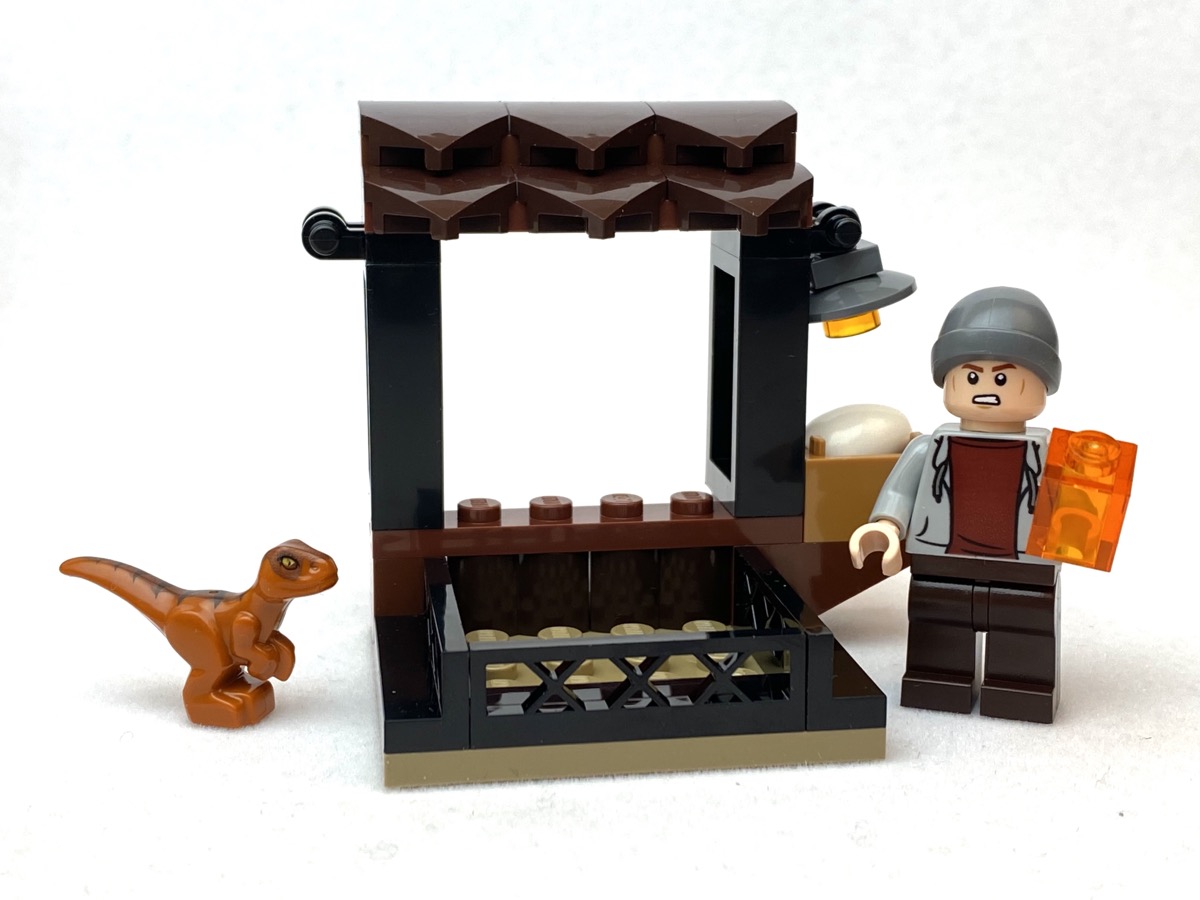 Despite not putting down anything for movies we’re looking forward to in 2022, there are handful of few movies I really am looking forward to, few of which I will watch in the theater. I’m okay waiting for them to hit streaming services or go on sale in disc or digital format, and my 65″ TV is just fine. Also, the price of taking the family to the movies is quite up there. For a family of five, tickets and concessions came out to about $100 for my local theater. Ouch.  But for the few movies I want to see in the theater, it’s mostly because the big screen experience is worth it. One of them is Jurassic World: Dominion.  Critically they’re not the greatest movies, but as a popcorn flick they are more than just fine. Dinosaurs on a the big screen? What’s not to like?

I stay away from spoilers and the ilk, I just watch the trailers so I’m going into the movie as blind as can be. And honestly, I’m not even sure what LEGO sets there are for it. This polybag is probably the biggest clue I’ve been exposed to as to what might be happening in the film.

Looking at just the title, 30390 Dinosaur Market, I’m inclined to believe that, now that dinosaurs re-inhabit the planet, a new economy has sprung up where people can buy/sell/trade exotic dinosaur babies as easily as puppies or kittens. 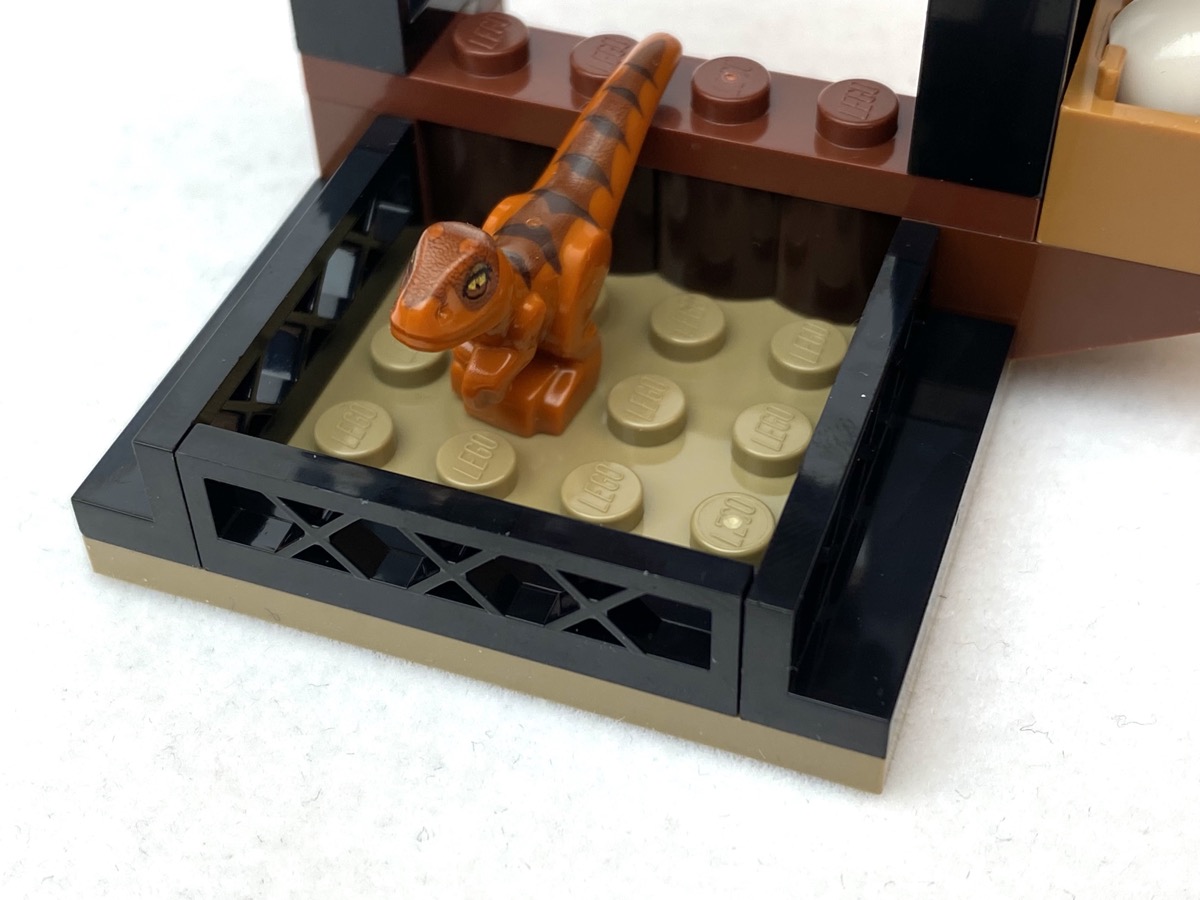 Here, there’s a baby raptor for sale, contained in a small pen. 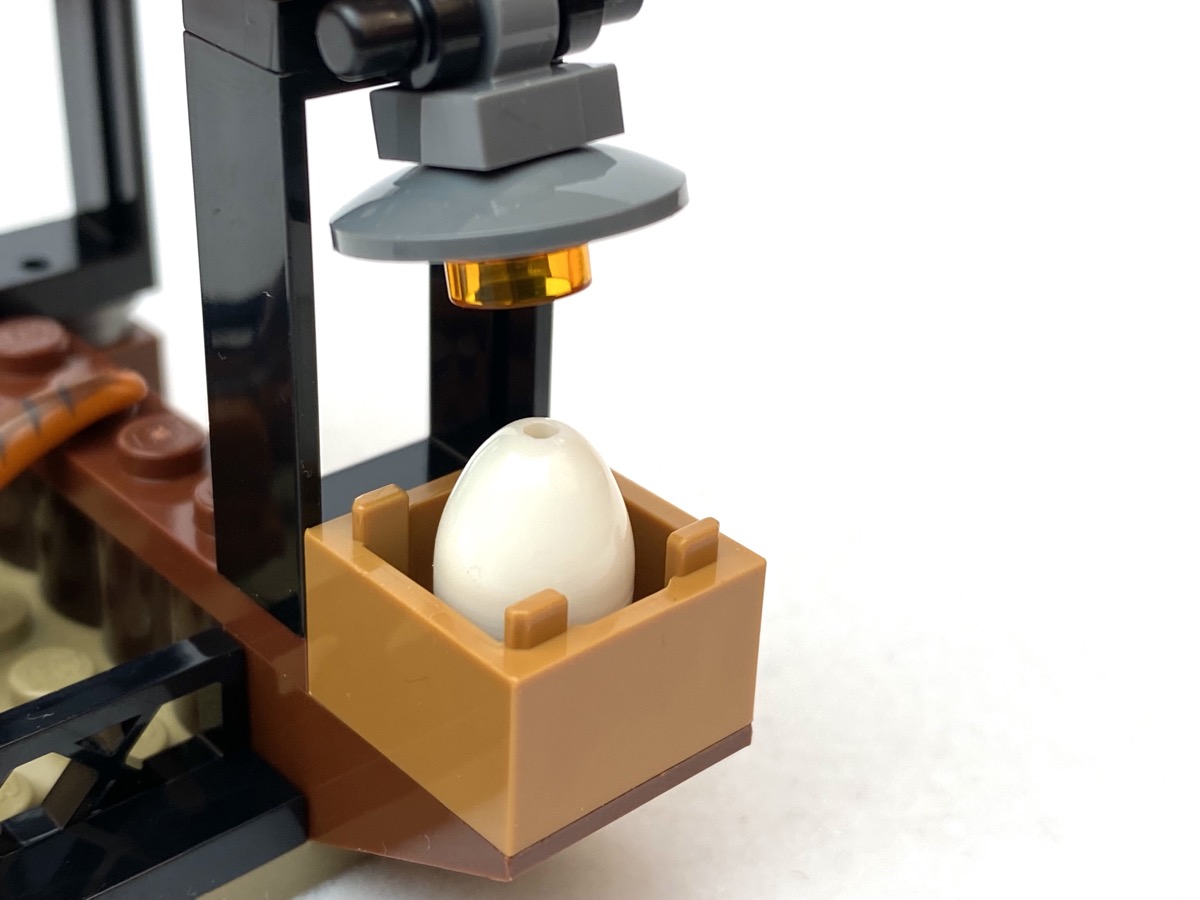 There’s also an egg basket under a warming lamp getting prepped for the next potential customer. 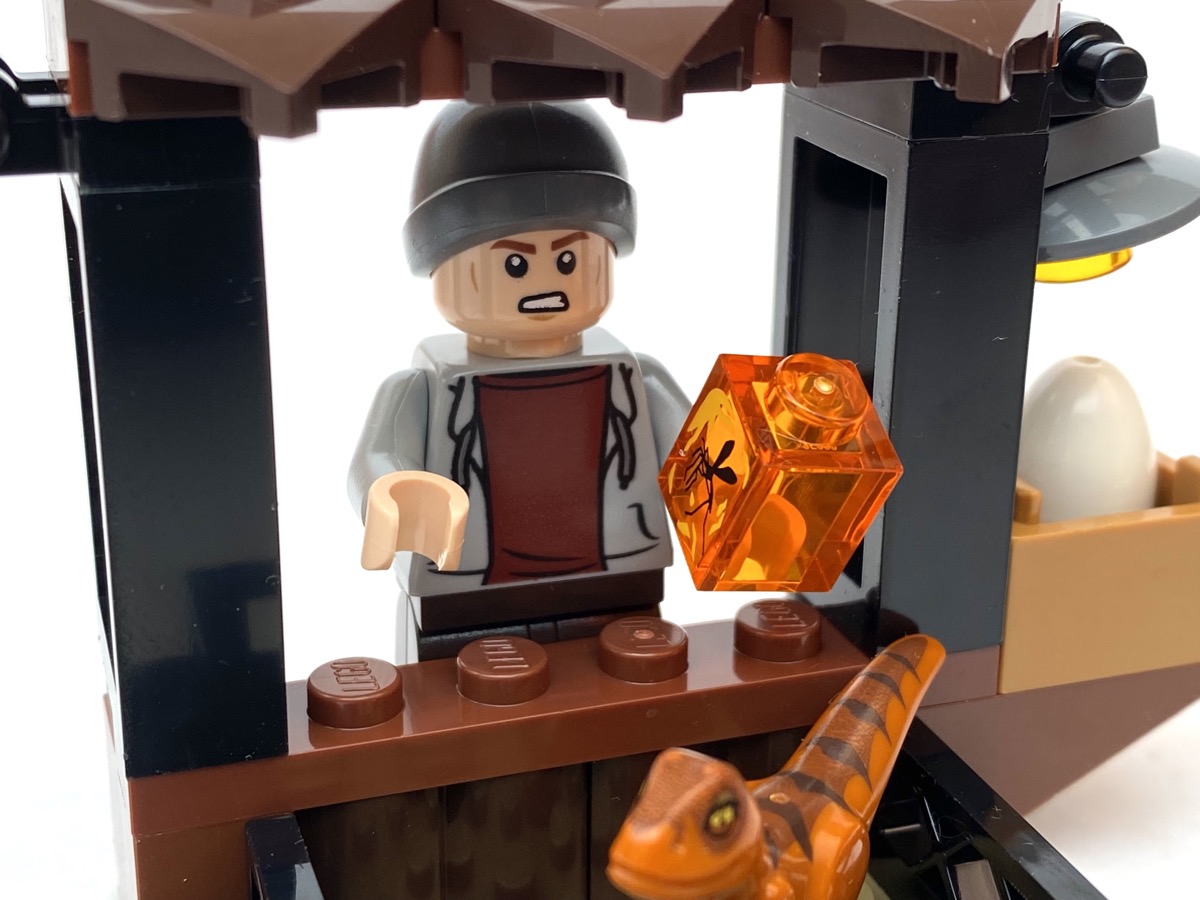 The minifig included is I assume the vendor. He’s holding a trans-orange 1×1 brick with a mosquito print on it. If you’ve seen Jurassic Park, this should immediately be recognizable as amber with a pre-historic mosquito trapped inside with hopefully some preserved dinosaur blood inside its belly. 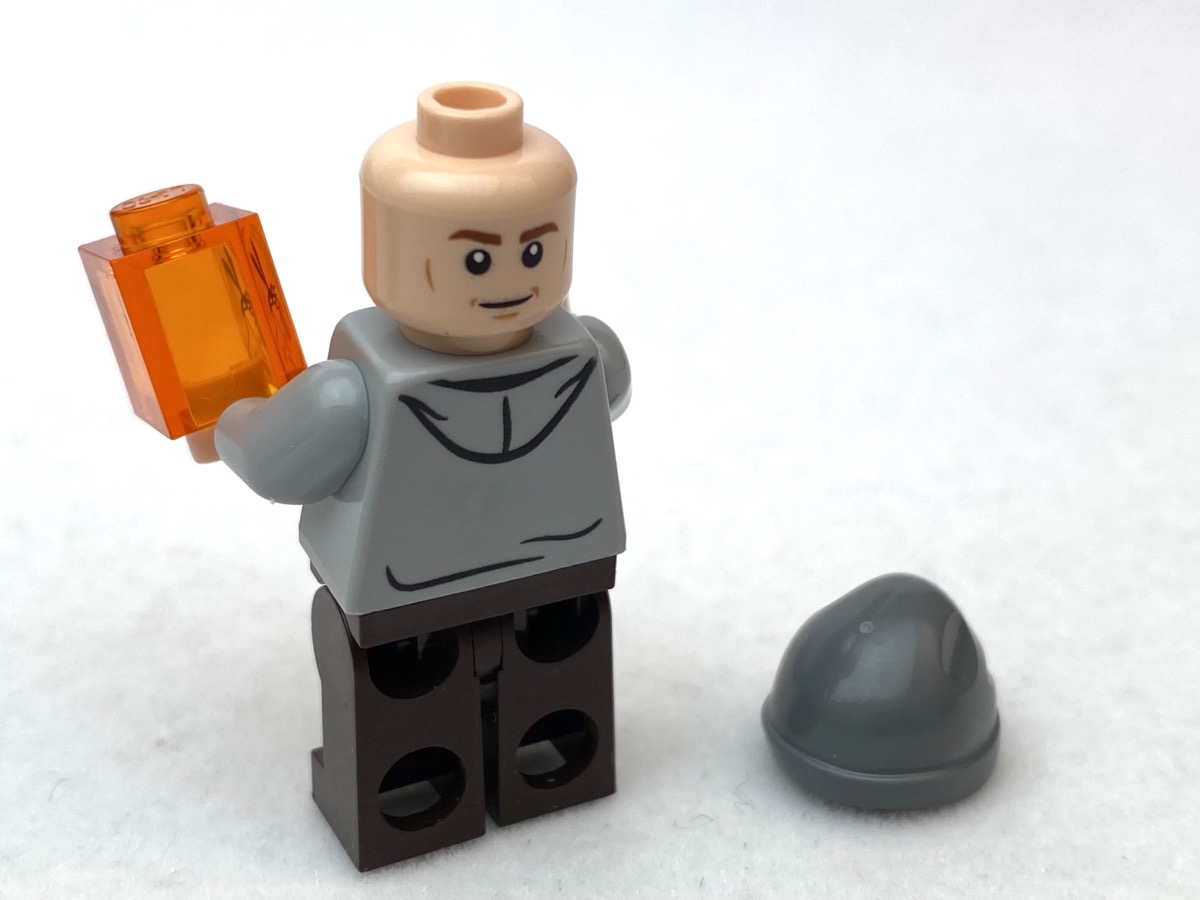 The double-sded head seems unnecessary. This should be the only print. He’s a vendor making a killing selling off cute baby raptors. Who cares if they’re the next alligator being flushed down the toilet. So what’s he got to be angry about? Inflation?

This minifig reminds me of my own sigfig, which is basically the CMF Series 4 Skateboarder. This one is very similar and speaks to my inner minifig with its grey zip up hoodie, beanie, and plain t-shirt. Blue legs for jeans is the only thing stopping this minifigure from being a perfect me, but that can easily be rectified. 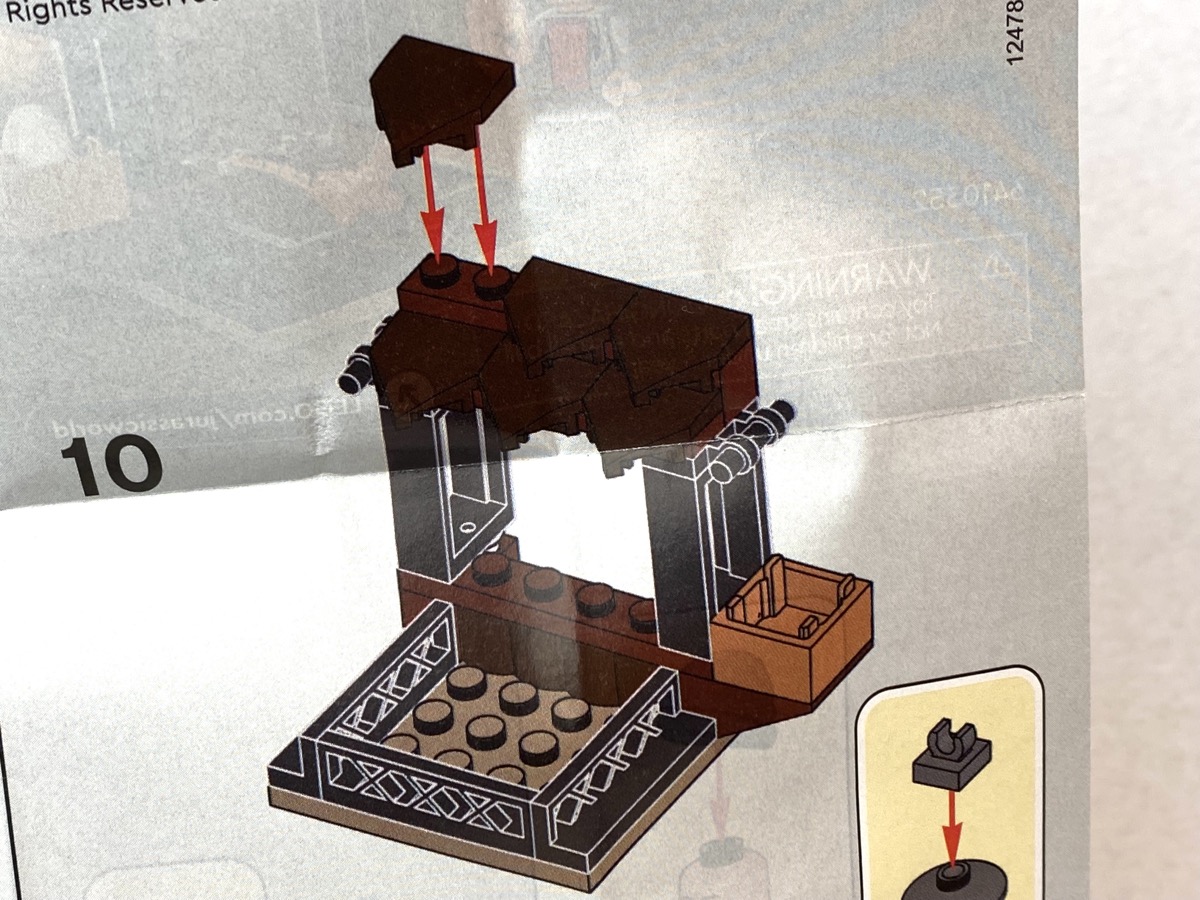 One thing I should mention is that LEGO needs to update the way they render instructions. I remember back in the day, and 10143 Death Star II specifically comes to mind, when there were black, grey, and dark grey pieces in a set, it was really hard to discern between the three. At then at some point, LEGO did the smart thing and outline black pieces with a white stroke instead of black and that made things so much easier. But now with dark brown in the mix, I think the same thing needs to be done. The shot above hasn’t been enhanced in any way other than exposure, but it shows the problem of mixing dark brown with light brown. The image is hard to read and discern the individual pieces. It’s a small set so it wasn’t too difficult to figure out but I can imagine this becoming a potential readability issue for other sets.

So all in all, it’s not a great set but it’s not a terrible set either. It is what the title says it is. While I have no frame of reference to place it in or any context to help understand the plot or anything, the baby raptor is pretty darn cute and if you’re a fan of LEGO dinosaurs, you can’t have too many of these babies, no pun intended.

Get It At Target!

I should note that today’s polybag as well as the ones from the past 3 days are available at Target right now (<== another affiliate link). The review was not sponsored by them, but if you’re a LEGO Jurassic World fan, you should pick up a couple of these. One can’t have too many baby raptors.

This set rocks! Kind of a ho-hum set, but the baby raptor and a close representation of yours truly is influencing my opinion here. And for those reasons, I’m giving this one a thumbs up. I can’t wait for the movie!