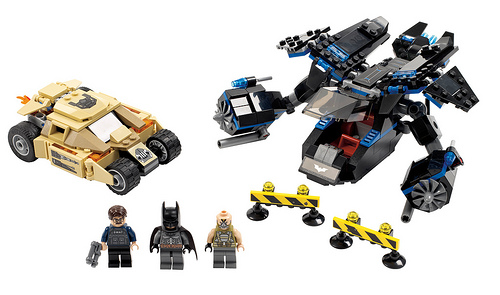 This set will be unveiled at the 2012 New York Comic Con either on Thursday October 11 or Saturday October 13. Rick “GIR3691” Theoroux will be there to shoot pictures and provide a first hand impression of the set.

My first impression? The Tumbler is tiny and makes the one from 7888 The Tumbler: Joker’s Ice Cream Surprise look like the crown jewels. The stickers used for the details actually make it look worse. The Bat is actually more impressive than I had thought but the way the ‘arms’ are built, with the exposed turbines along with the cannons, just screams laziness. It looks like something I would build, and that’s not saying a whole lot. I’m not crazy about all the blue; it reminds me of the original TIE Fighter set. Arms and blueness aside, I actually like the way it looks and can’t wait to build it.