Way back when a license was announced for LEGO to produce sets based on DC Super Hero Girls, it couldn’t have come at a better time. My daughter falls into the target age group and she, thankfully, enjoys LEGO as much as I do. She recently picked up a comic book based on the DC Super Hero Girls and really enjoyed reading it. So building these sets was a perfect storm of her interests coming together. LEGO sent over a sample of the three sets that are available early ahead of the usual January cycle and I put her to task to build all of them. She would build, and I would supervise and take notes for this review. She gravitated toward 41230 Batgirl Batjet Chase for her first build and was swooshing it around by the end of the night. It was a hit. 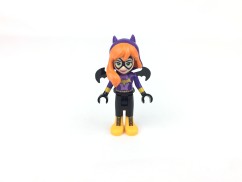 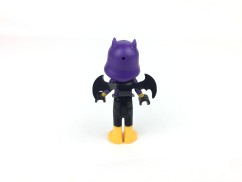 The theme uses the Friend’s minidoll form for the figures for good reason. It is, after all, a theme targeted to girls and what better way to complement an existing Friends/Elves collection than by making super heroes from, literally, the same mold. Batgirl’s hair/hood combo piece is made from ruber, and her wings are made from plastic instead of the soft goods cloth that’s normally used for capes. You do get an extra set of wings as backup should they tear through rough handling. They anchor onto the body at the waist and neck so the wings don’t really flail about. Collector’s will be glad (or maybe even sad) to know that this is the exact same figure as the New York Comic Con giveaway. 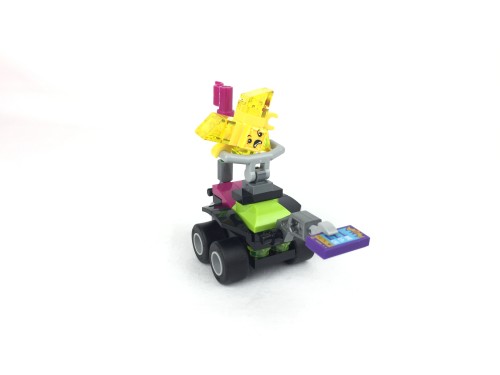 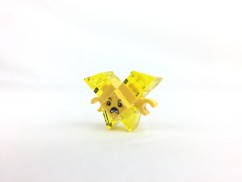 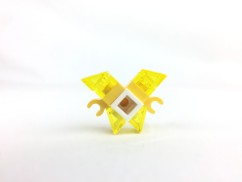 All of the sets come with a buildable enemy called a Kryptomite and each set’s Kryptomite is a different color. Not sure what the story is behind these guys; there isn’t any backstory or included comic to explain the story or the setting of the sets. I suppose we’ll have to wait for the DC Super Hero Girls sub site on LEGO.com to go live on January 1 to find out. From what I can gather, they seem to be nuisances that the Super Hero Girls must take care of in a heroic fashion, meaning they capture them using nets. In this particular set, the Kryptomite has it’s own vehicle in the shape of a utility cart and is attempting to steal Batgirl’s cell phone. 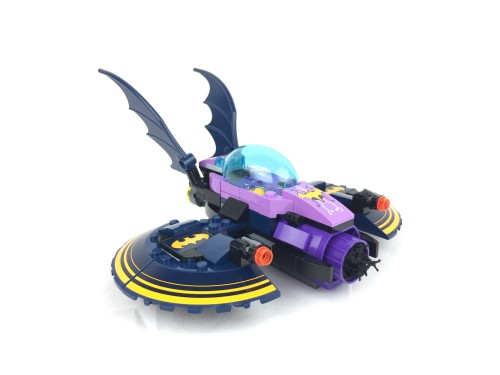 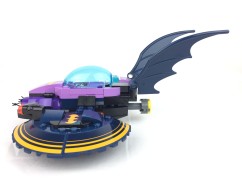 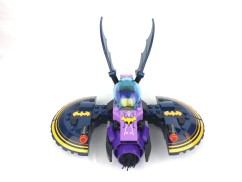 Now, the real meat of the set is Batgirl’s Batjet. And let me tell you, this thing is awesome. It’s colored using dark blue and black elements with touches of yellow to keep it as Batgirl as possible and there are portions that are lavender and purple to give it the same appeal as other Friends sets. It sounds like a lot colors but the color blocking is done well and the whole thing just works. 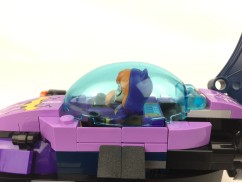 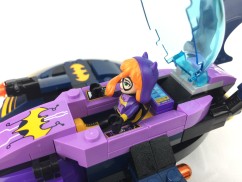 There is a trans-light blue canopy that seals up the cockpit pretty well. It’s a bit of a tight fit though; Batgirl needs to be placed nearly perfectly to get the canopy to close correctly without bonking her on the head. That right there is probably the worst part of this set and that’s saying somthing. But she does fit. And you know what else fits? Her cell phone stores neatly on a jumper plate behind her head. I, for one, and super glad that accessory storage is becoming a trend in sets these days. 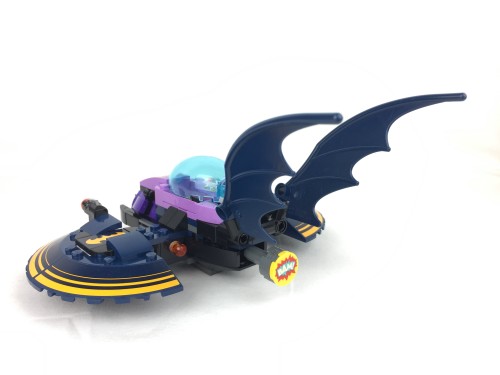 The HUGE fins are ridiculously huge, but I like it. It really adds to the cartoony nature of the overall theme and the initiative it’s based on. They are attached to the ship by a series of technic joints that keep them at a fixed angle. That makes the OCD side of me very happy. No fiddling around to make it look just right, no accidental drooping or knocking them around. Just set it and forget it. 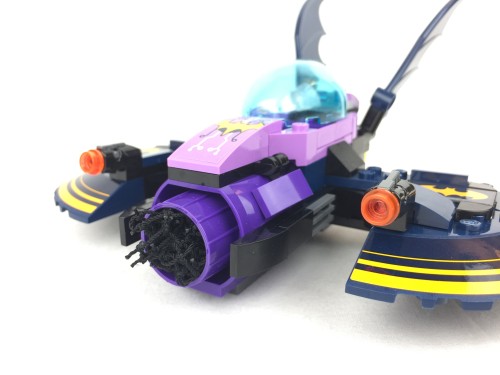 There is a stud shooter on each wing but Batgirl’s main weapon of choice to take down those pesky Kryptomites is a net launcher built right into the nose. There is a plunger in the back that you depress to shoot the net forward. Nothing really holds the net into place other than tension but it works well enough. I do like the 2×2 round tiles that are on both ends of the plunger, one of which is printed and says, “Bam!”, reminiscent of the campy ’60’s Batman TV show. And that’s something that is ubiquitous among all of the sets, the “Bam!” tile indicating a point of action that the builder can act on. 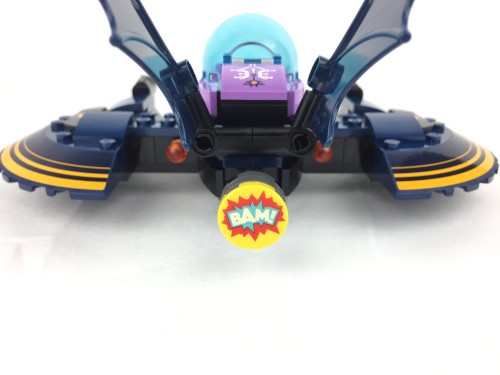 Out of the three preview sets available right now, this one is priced at just $24.99 and for that price you get an awesome little set. Minidoll and colors traditionally geared towards girls aside, this set could appeal to just about Batman fan, boy or girl, man or woman. It’s a tight little ship that stays true to the Batman design paradigm. The play features work nicely and the swoosh factor is through the roof. Even if you’re not a Friends fan and/or have no intention of getting any of the DC Super Hero Girls, this is, so far, the gem of the line and for me, an easy recommendation for anyone. 41230 Batgirl Batjet Chase has easily earned five out of five stars. 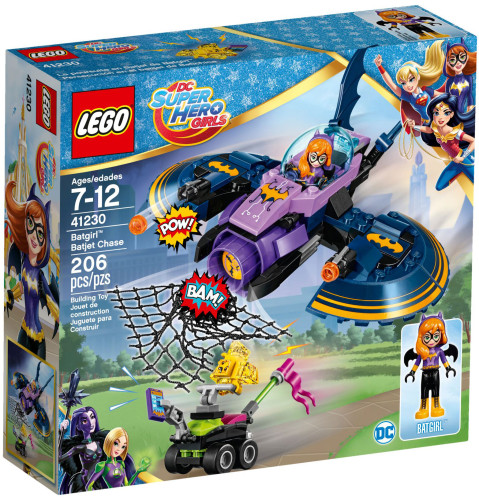