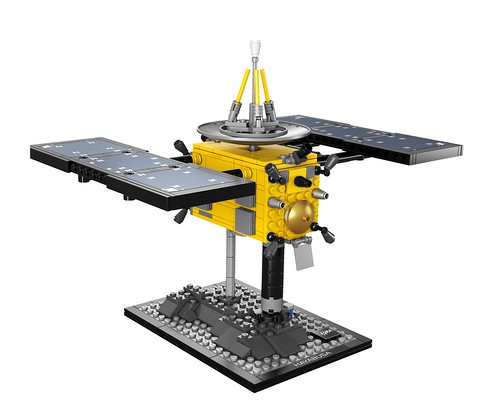 LEGO CUUSOO Japan’s latest model, 21101 Hayabusa, went on sale in Japan I assume today since I got the press release today. Unlike their first model, however, 21100 Shinkai 6500 Submarine, this set will be available at LEGO Shop@Home in limited quantities later in the year. No release date has been given yet but we’ll keep you up to date on any developments. Official press release below.

BILLUND, Denmark â€“ The Japanese spacecraft Hayabusa, the second LEGOÂ® CUUSOO release, has gone on sale in Japan, while a limited number of Hayabusa sets will also be available exclusively online via shop.LEGO.com later in the year. No release date has been set yet.

The original Hayabusa model on LEGO CUUSOO was built by Daisuke Okubo and achieved 1,000 supporters on the Japanese-only version of LEGO CUUSOO in the spring of 2011. LEGO model designer Melody Louise Caddick designed the final model, refining earlier concept models based on Daisukeâ€™s original project.

LEGO CUUSOO is a website where LEGO fans can submit their ideas for new LEGO products and collect votes to make their ideas become a reality. They can also vote for other usersâ€™ ideas. It can be found at https://lego.cuusoo.com

LEGO CUUSOO began in 2008 with a Japanese site that attracted hundreds of ideas and saw thousands of votes cast by a 35,000-strong community. It was launched globally in October.

The first Japanese product, the Shinkai 6500 submersible, went on sale in Japan in February 2011. A project backed by Minecraft developer Mojang became the first user-sponsored project to be approved on the global version of LEGO CUUSOO.

Ideas supported by 10,000 votes are examined by a LEGO jury to check the models meet LEGO standards of safety and playability and support the LEGO brand. Consumers who have their ideas chosen for production will earn 1% of the total net sales of the product.â€™

Hayabusa (â€œfalconâ€ in English) is an unmanned spacecraft built by the Japan Aerospace Exploration Agency (JAXA), designed to travel to a small near-Earth asteroid named Itokawa and return sample material to Earth. Hayabusaâ€™s mission began in 2003 and ended successfully in 2010.