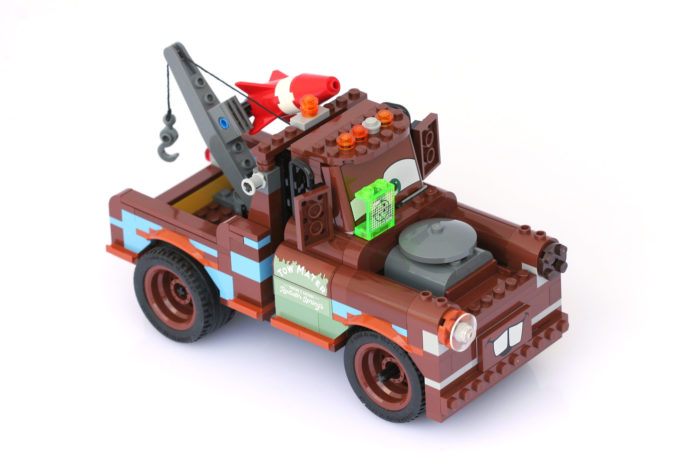 It’s a little funny that my least favorite character from the Cars franchise ends up being one of the best LEGO Cars sets. 8201 Classic Mater was such a surprising treat, I hoped UB Mater would not disappoint. 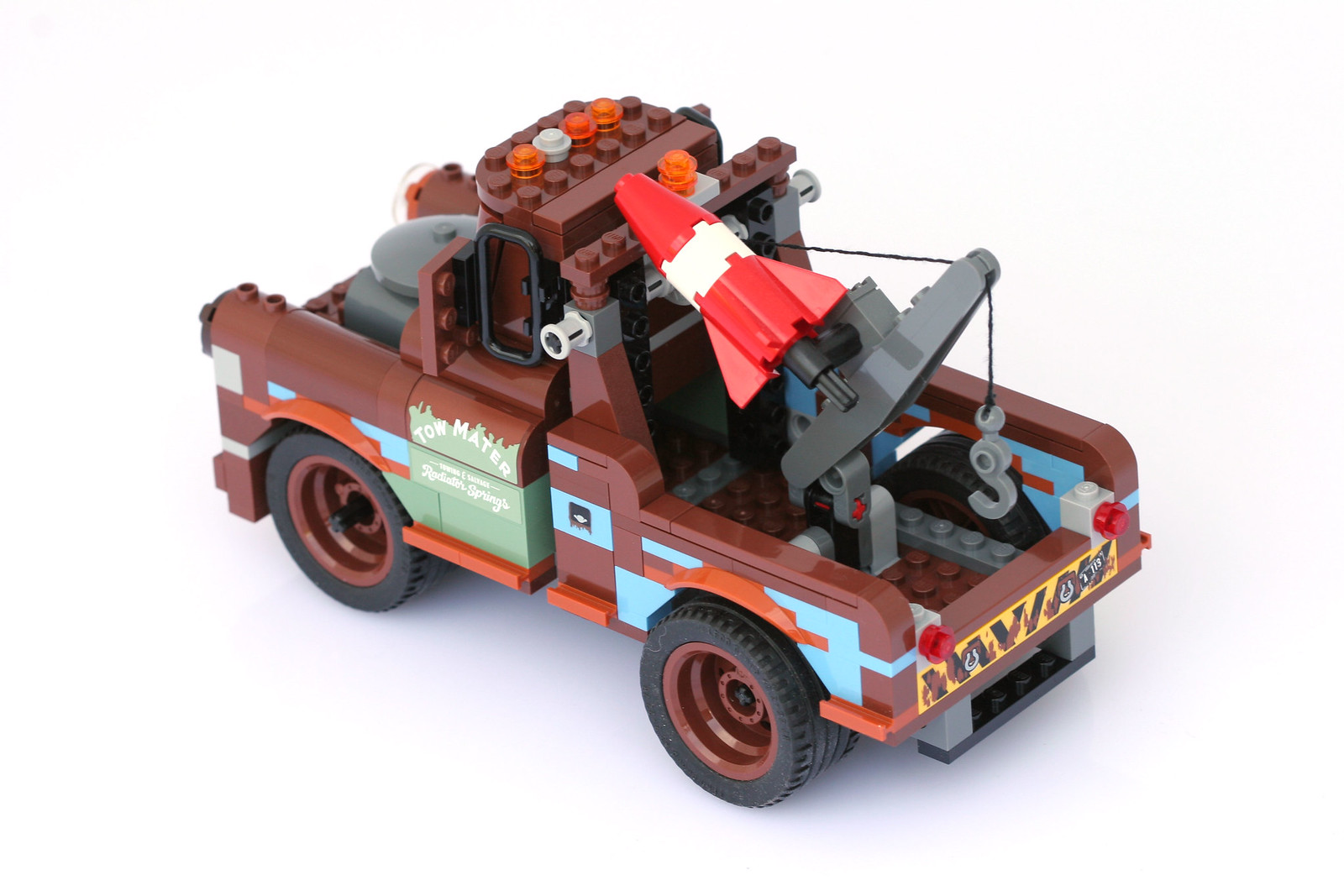 And it did not, not in the least. The Walmart-exclusive set will set you back $29.99, same price as the other Ultimate Build sets, and you will be rewarded with a nice assortment of brown parts with splashes of medium blue, dark orange, and even sand green thrown in totaling 288 pieces. The medium blue is no doubt a reference to a Mater of yesterday when he shined in his spiffy blue paint job. I so enjoyed this build that I’ve been tempted to inventory the parts list to see if building him in all medium blue would be even be possible. 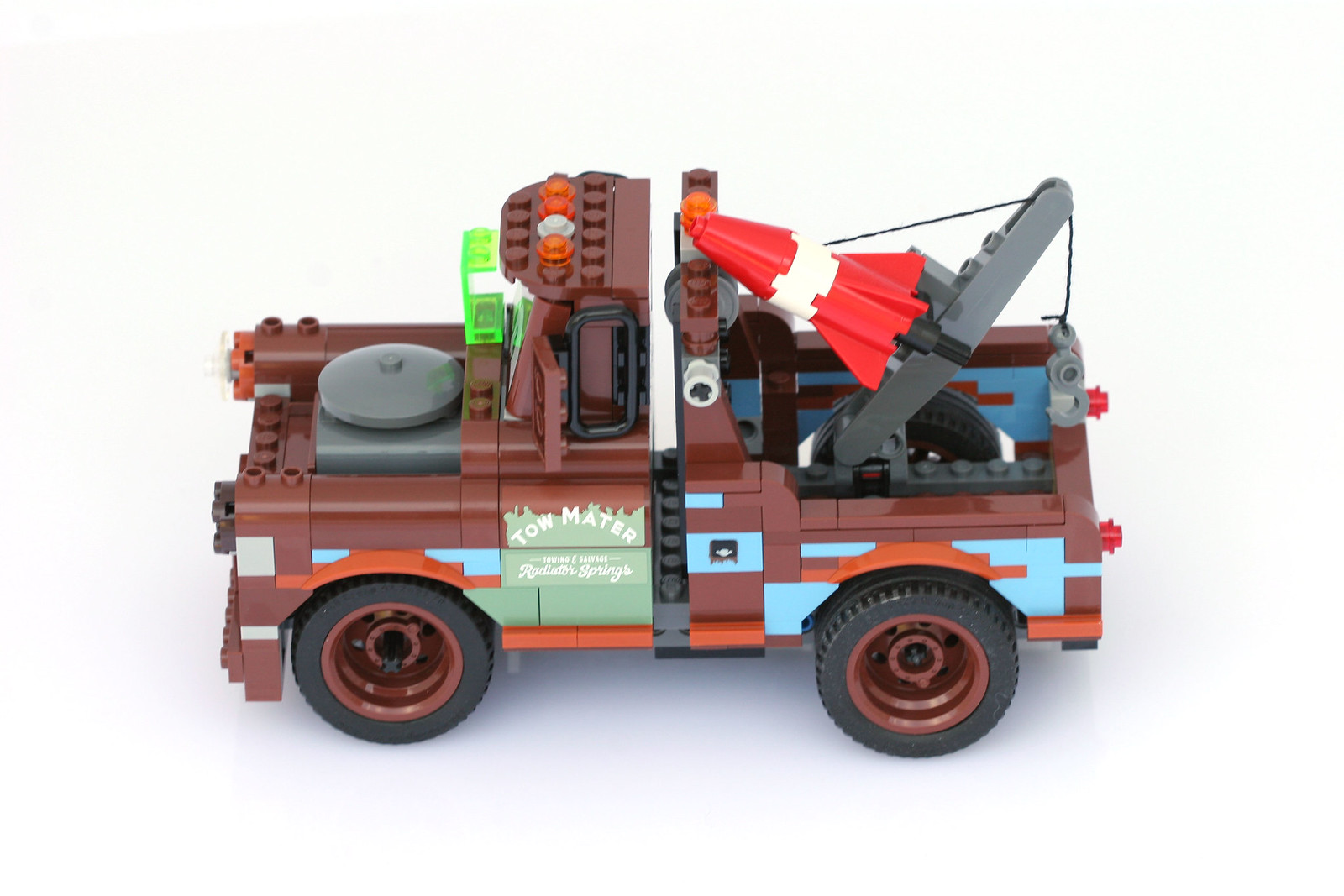 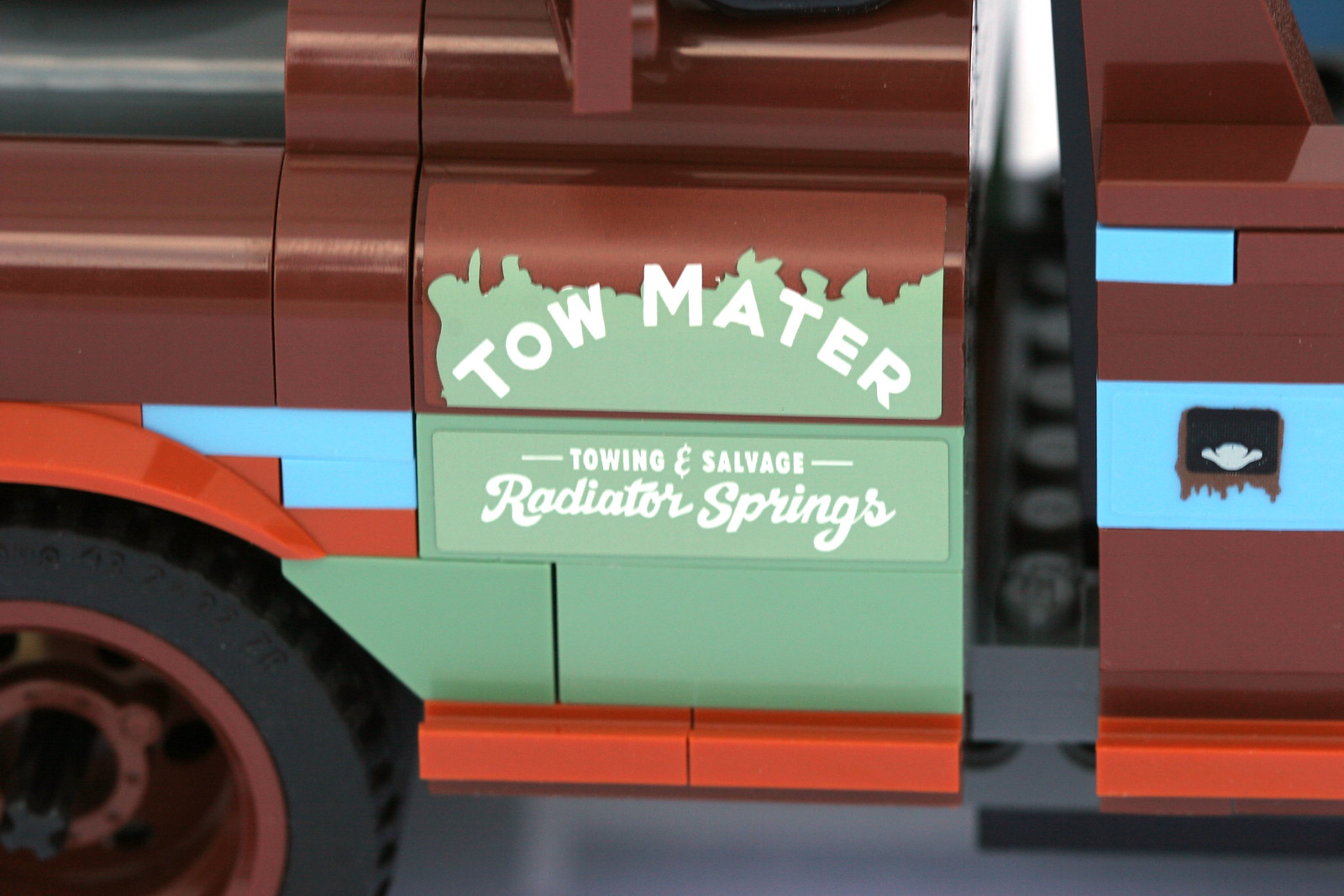 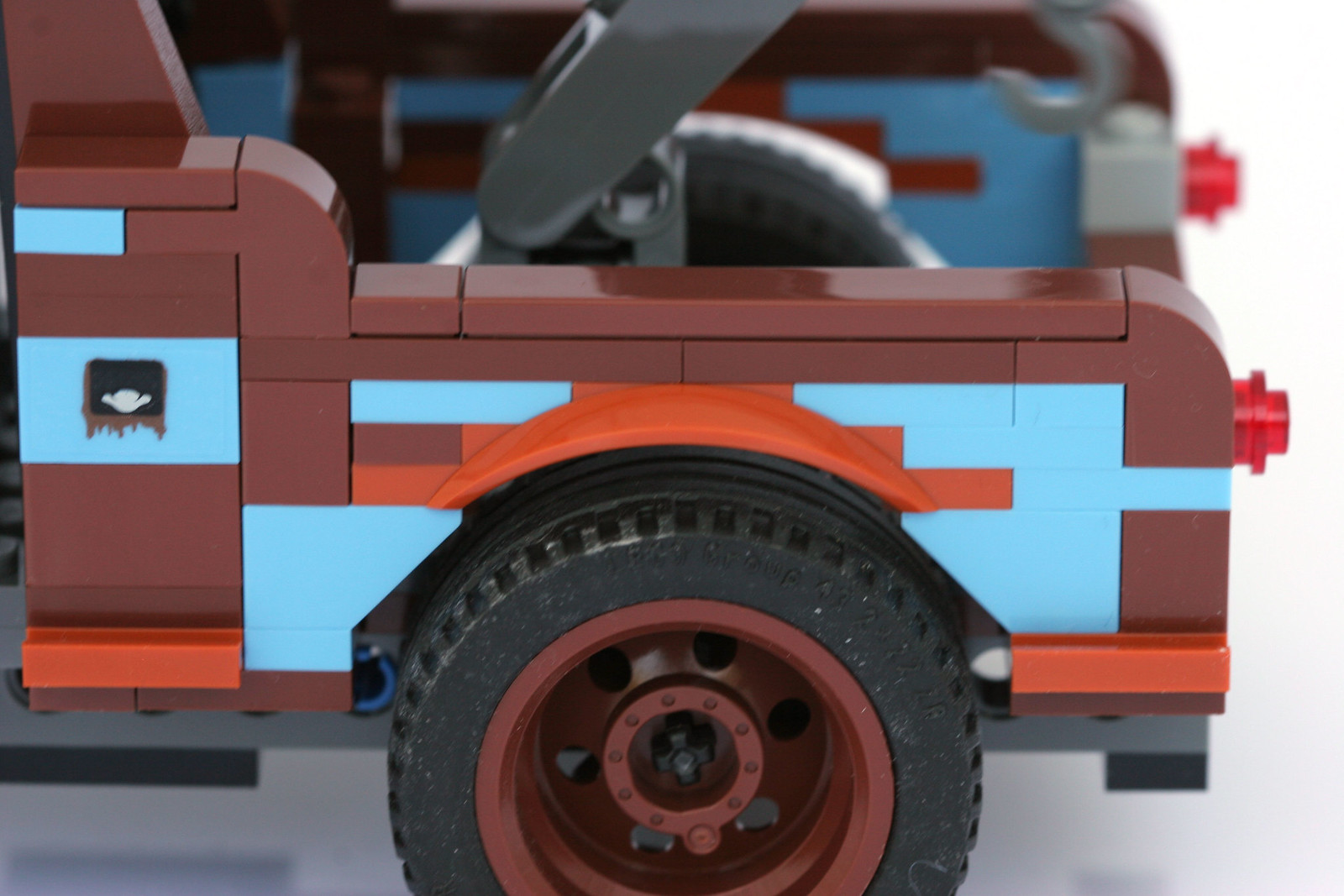 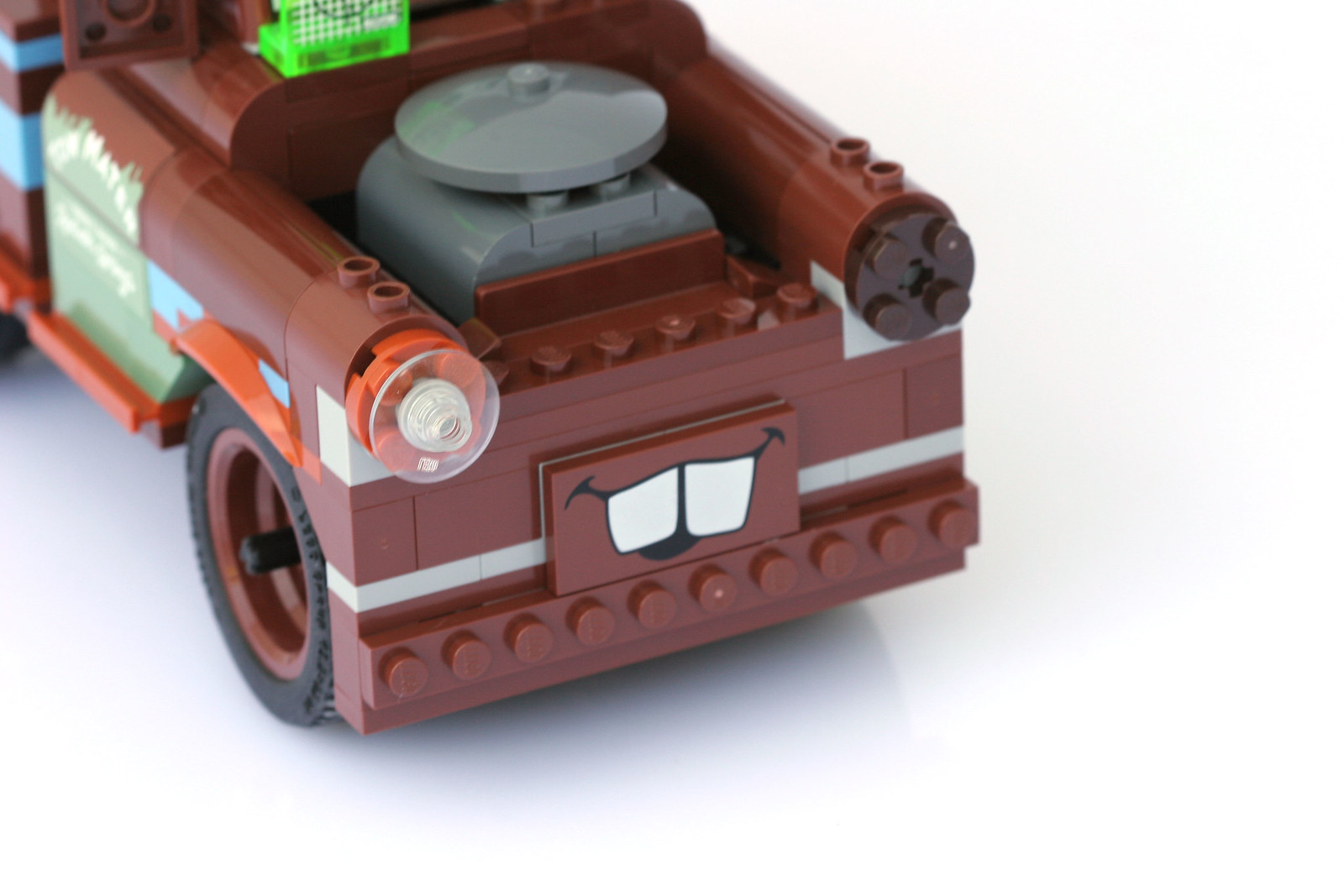 The look. LEGO really nailed the look of Mater. The mostly brown model actually had some color inconsistencies between elements. I wondered if some of the more browner parts were leftovers from when LEGO transitioned to the new reddish brown ABS or if it’s just a natural byproduct of the manufacturing process. In any case, the inconsistency, which normally would be a huge negative mark against the set (see first version of the Harry Potter Knight Bus), is a really great effect for Mater as it perfectly lends itself to a mottled look simulating rust and years of neglect. There are some dark orange elements thrown in to further enhance the appearance of rust. 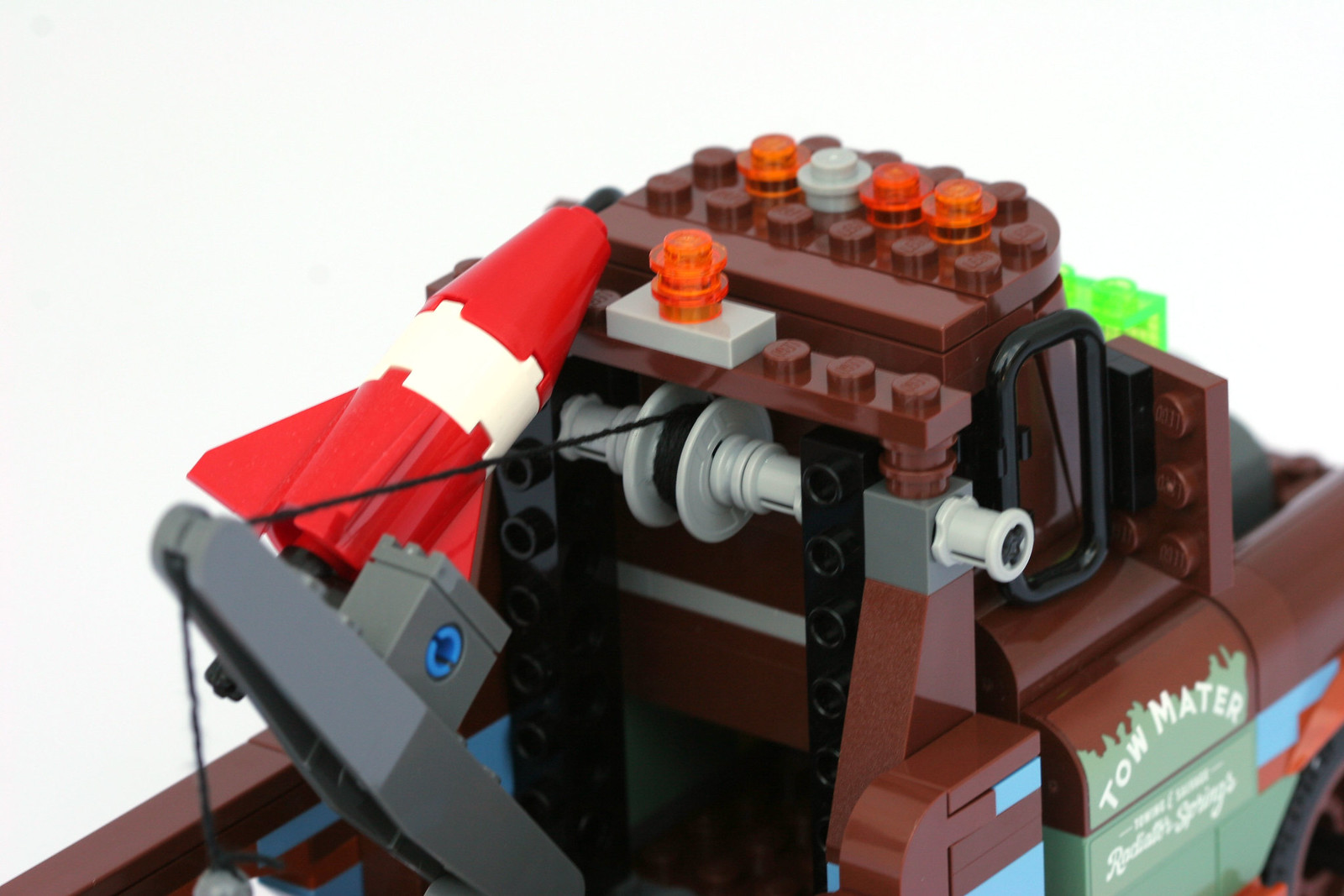 Tow cable winch. Or a lack thereof. First of all, throwing in a working tow cable was pretty much going to be a requirement for a UB Mater and LEGO thankfully did not drop the ball. What I really appreciated, however, was how subtle the winch system is integrated into the model. No giant handle sticking out the side, just a Technic bushing you turn to your heart’s content. There’s nothing more distracting on a cool looking LEGO set then a giant winch lever sticking out the side of a model, or a steering knob on the top of some. The execution of Mater’s winch was thoughtful and I for one appreciated it’s subtle integration. 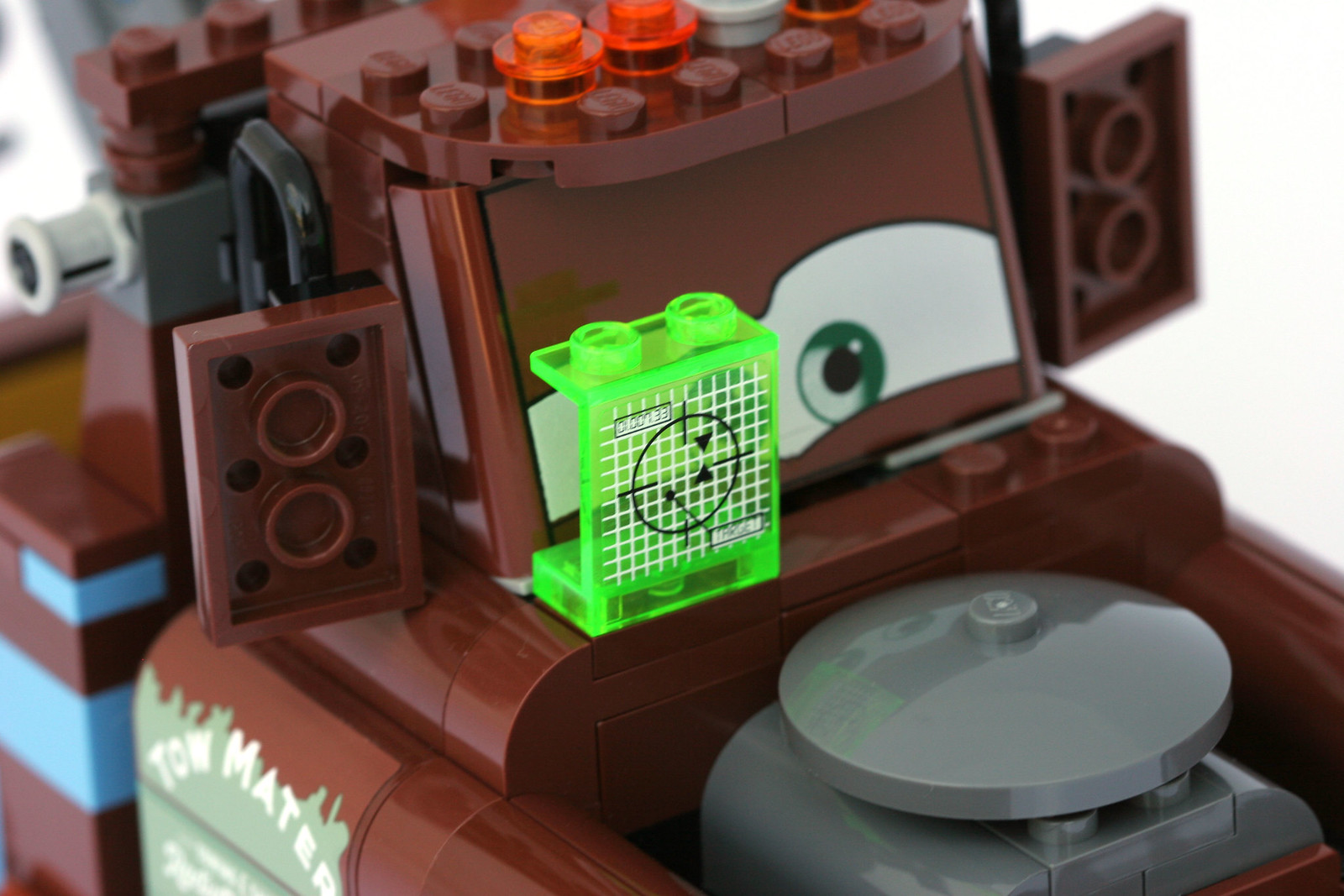 Non-spy version. I can’t remember if Mater was actually outfitted with a targeting screen and a rocket; I remember machine guns, parachute, and jet packs, but not the targeting screen and rocket. Thankfully, those are easily removable so you can display Mater in his regular, average intelligent self, and I’m guessing the majority of people will do the same. 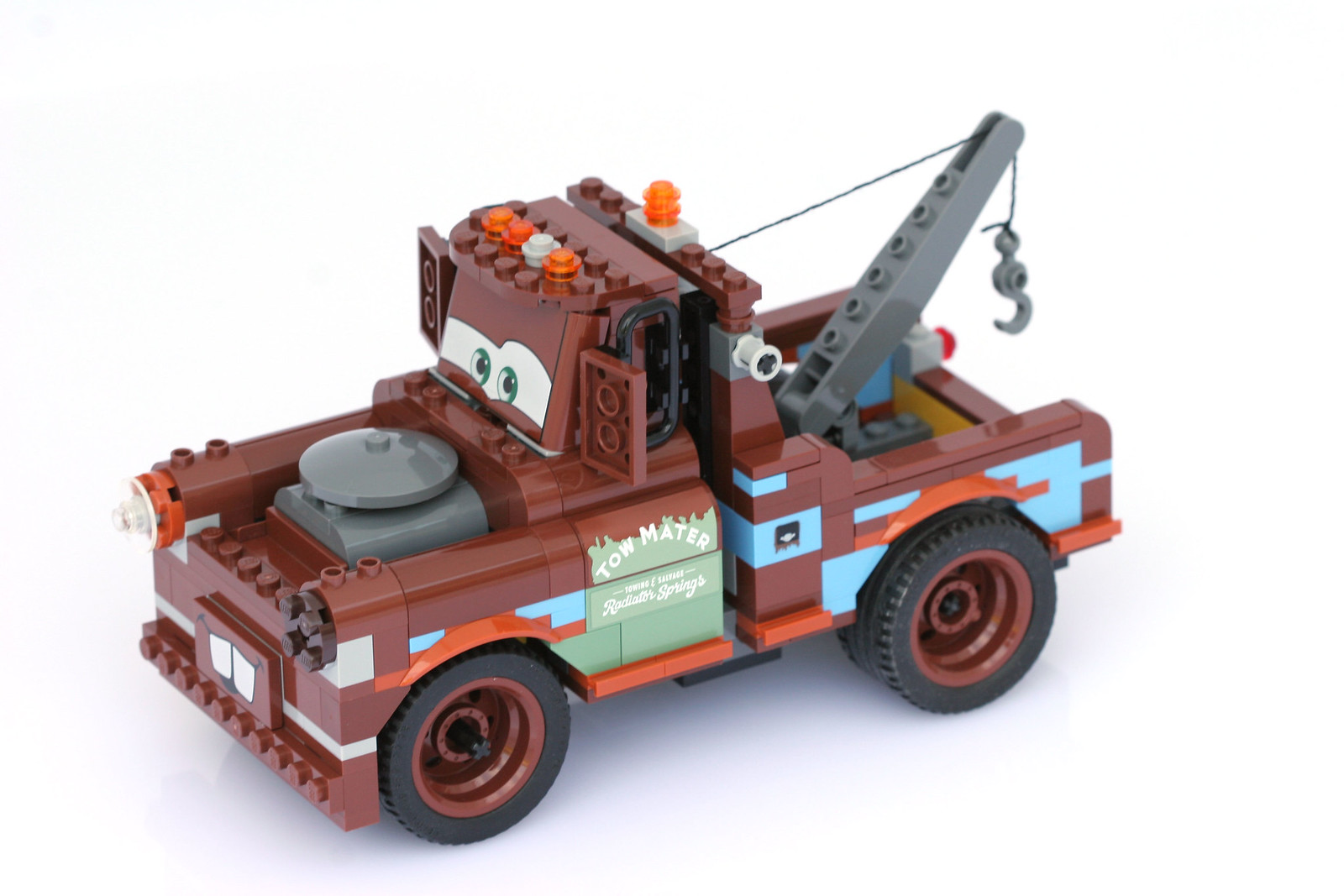 Small cabin. The head/eyes/cabin of Mater are shallow and the design completely neglects including any semblance of door windows. Adding a few more studs to deepen the cabin and putting in a window would have made Mater perfect. But as it is now, it just seems like his head is a bit too small. 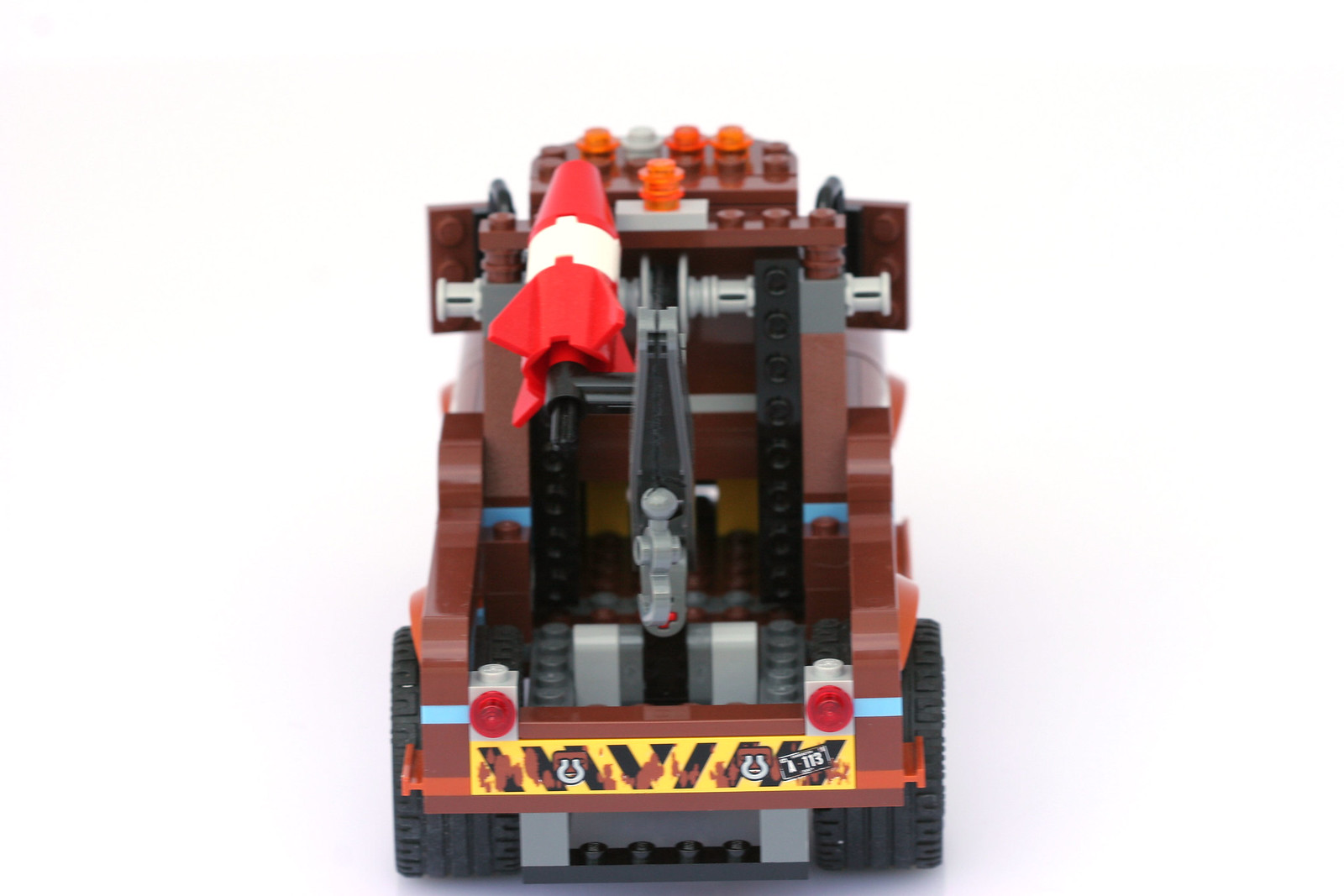 The bed. The bed of the truck is all wrong. The rear wheels are exposed inside the bed and the winch should be placed on the bed instead of suspended on the crossbar above. The winch itself is also horribly wrong; it works, but it’s not very screen accurate. Minus points for inaccuracy. 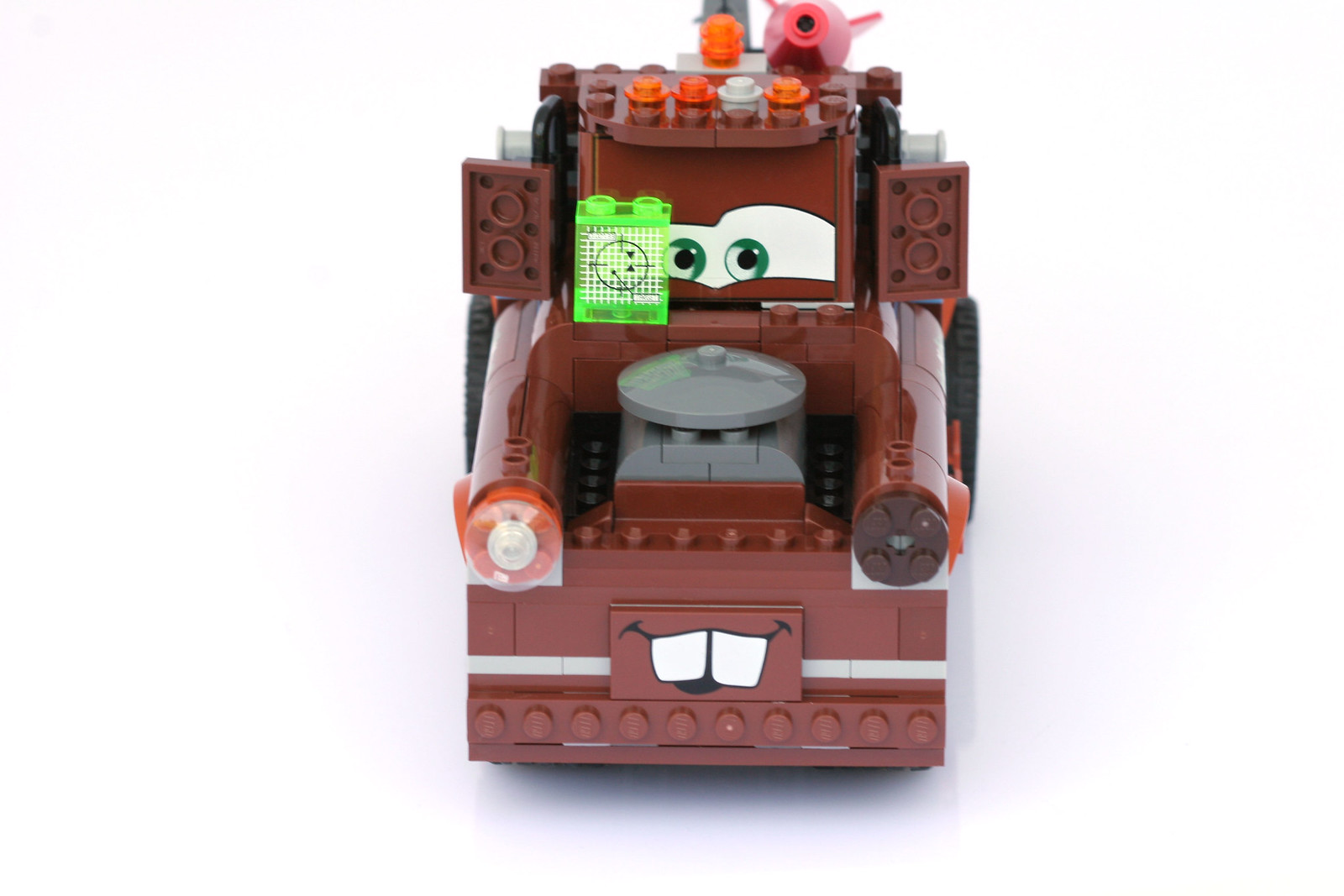 Engine block. It seems the engine block sits a little too high. If someone wanted to mod in a hood, he/she would be hardpressed to get one to fit over the air filter and still lie flush with the rest of the frame beneath Mater’s eyes. There’s a good chance I’m just nitpicking here since the turntable video on youtube shows the engine block also sitting pretty high up.

A definite must-buy. Highly recommended despite the flaws. Even at full price, Mater is an excellent model and sets the gold standard for what the other Ultimate Build sets should have been designed against. Sadly, the other entries (Lightning McQueen and Francesco) missed the mark by a wide margin. If there’s one Ultimate Build set to get, it’s this one. As a parts pack, the variety of brown elements would be welcome in any serious MOC’ers library of parts. 5 out of 5 stars, easy.