Nick already did an excellent review of Pokémon Sword and Shield and for him it landed one star higher than where I would have placed it. To me, the story is really secondary to the experience of catching them all to get the shiny charm. That’s been my end game goal for a couple of iterations now. That being said, the story was nonsensical and had these events that weren’t really explained in any meaningful way. I remember when The Rise of Skywalker came out, there was a meme about final epic battle and it said “things are happening”. That’s kind of the best way to describe the last half of the main story arc including the post game story that leads up to the capture of the box legendary: things are happening. It doesn’t get into great detail on why the things are happening or how any of gets tied together. Story elements are left unresolved and the whole thing just feels unsatisfying.

But like I said, the story isn’t something I was heavily invested in. Completing the Pokédex and chasing the shiny charm was my main goal and that part I enjoyed. The mixture of visible Pokémon in the overworld as well as the random encounters in tall grass made encountering Pokémon a much more controlled experience. The visible encounters were actually quite useful to help filling out the dex. Actually seeing the Pokémon let’s you avoid the ones you already have and encounter the ones you don’t. It removes a TON of the guessing game and randomness from previous iterations of the game. There were still Pokémon that can only be found in certain areas by a “!” random encounter but I felt like I was looking up Pokémon encounter rates on Bulbapedia FAR less than before.

Don’t get me wrong, looking up Pokémon on Bulbapedia or Serebii is still a necessary activity if you want to complete the dex in a timely manner. Some Pokémon can only be found in certain parts of the Wild Area and under specific weather conditions. By manipulating the date on your Switch, you can fast forward or backtrack to a specific date to trigger the desired weather conidition. Even then, some Pokémon may have a low percentage rate of appearances. But overall, because of the density of the Wild Area and the pokemon you encounter along the story progression, filling the dex felt like a fast and easy accomplishment.

Once you get the shiny charm, that feeling of efficiency goes right out the window due to the mechanics of the hunt. Every Pokémon game has a different method for shiny hunting that doesn’t involve breeding, and Sword and Shield’s method might just be the worst. Here’s a chart that breaks down the odds taken from the Shiny Pokemon reddit:

To get the absolute best odds at 1/455, you’ll need to knock out or capture at least 500 of a given Pokémon AND encounter a brilliant (yellow aura) one. That number sounds stupidly high and that’s because it is. I spent a couple of nights just circling Route 1 looking specifically for a shiny Wooloo. My first one came in at 83 encounters and my second one came in 417, and neither one was brilliant. Skwovet though? It took over 700 before getting my first one and that one came from a brilliant one. I’m at 888 encounters now and still need a second. There were a couple of times where I’d circle Route 1 avoiding any non-brilliant Skwovets and I’ve come to the conclusion that it’s better to fight all of them than just waiting for a brilliant one to appear. Brilliant Pokémon only have a 3% chance of spawning, and that in itself is really low. The odds are really stacked against you, but the real problem is trying to hunt for a specific low encounter rate Pokémon. 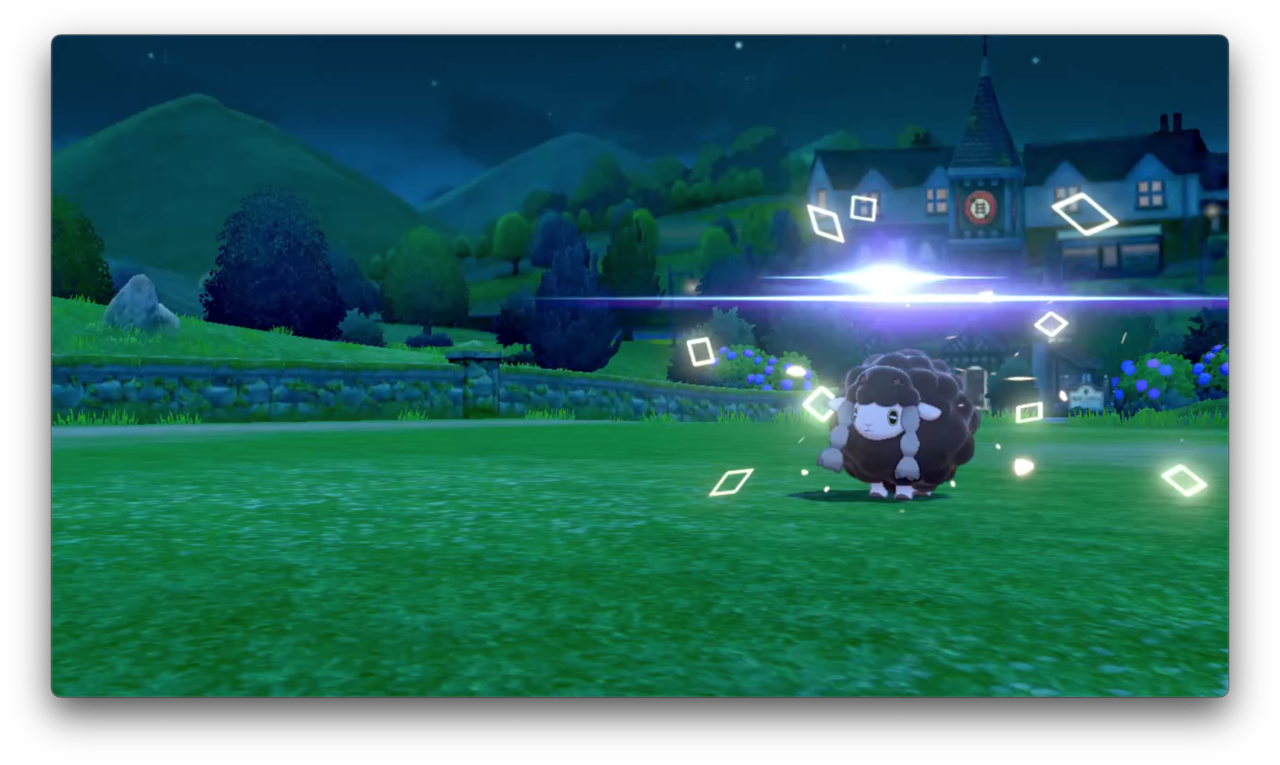 Pokémon SunMoon/UltraSun/UltraMoon didn’t have this problem. Sure there were still Pokémon that had the 1% or 5% low encounter rate, but once you hit it, you can make SOS calls all the live long day and every call would, for the most part, summon the same Pokémon. It made targeting a specific Pokémon for shiny hunting so easy. Plus, to maximize your odds in UltraSun/UltraMoon, you would just need to feint 30 allies that answered the call. Just 30! The odds become 1/273 with shiny charm. There are some low encounter rate Pokémon that had also had a low SOS call rate, like Dhelmise, but there weren’t that many of those kinds of Pokémon. And for those, that’s where the Masuda Method really comes in handy.

If you don’t know the Masuda Method is a method of breeding Pokémon using one of your Pokémon and a Pokémon from an entirely different region. Foreign ditto’s are the most popular foreign Pokémon to get due to the fact that it can breed with any Pokémon to produce an egg of the same non-Ditto Pokémon. This is a popular method for shiny hunting if you don’t mind having boxes and boxes full of rejects that you have to release one at a time. Every method has some sort of time sink element built into it, and releasing Pokémon is it for MM. If you’re a subscriber to Pokémon Home things can be sped up pretty significantly because Home allows you to release multiple Pokémon at once. Masuda Method has the same odds across every game ever since that method was revealed: 1/512. It is probably the best method to get a specific shiny with the best odds in Sword and Shield despite Dynamax Adventures having 1/100 odds.

Dynamax Adventures’ odds sound great on paper and if you go through and catch all four Pokémon, you have a pretty good chance of getting something shiny. At least that’s what you’re supposed to beliee. 1/100! That’s like, 1%!. But even that is still not great. Out of the 40 or so DA’s I’ve participated and catching 4 Pokémon each time, I still haven’t seen a single one and I’m well over odds at 160 total captured Pokémon. The worst thing about it is the amount of time between checks. On average, an SOS call in the Gen. VII games is just a few seconds. In Sword and Shield it’s around 8-15 minutes between checks making it a huge time sink.

The other issue I have with DA shiny hunting is that you don’t really know what you’re going to get. For Dynamax Adventures, you go through a a series of caves and encounter three regular Pokémon before hitting the final legendary. Those first three Pokémon are completely random, so its fine if you don’t care which shiny you get. For the fourth legendary, it too is also random unless you’ve encountered it at least once before AND you did not capture it that first time. I made the mistake of catching Reshiram on my very first DA. Around my fourth run, I encountered it again but wasn’t able to catch it. The scientist at the DA cave said I could save it’s location and try and hunt for it next time. When I selected Reshiram as my target on my next run, the scientist told me that since I already caught one, I wouldn’t be able to catch another one. This is something I should have realized before but it was an oops moment for me. I could always hunt for a shiny Reshiram in another game so it’s not a huge loss but still, that door of opportunity in Sword is effectively closed.

I’ve been shiny hunting Zekrom for the majority of the 40 DA’s I’ve participated in and still can’t get the green-tipped shiny version, or ANY shiny Pokémon for that matter. I feel like trying to get shiny legendaries from Ultra Wormholes in US/UM is still the way to go as the soft resets are much faster. In the end it probably evens out: 1/100 from Sw/Sh Dynamax Adventures with about a 10 minute buffer between checks, or 1/1365 in an Ultra Wormhole with just seconds between resets. I’m still going to try and get a shiny from a DA though just to prove to myself that it’s possible. And once I do, I’ll finish off the Crown Tundra Pokédex, its story content, and then finally move on to Brilliant Diamond and Shining Pearl. Pokémon Sword and Shield will be one of the last Pokémon games I’ll want to spend time shiny hunting in as there are better more productive ways to do it in other games.

So yeah, if you haven’t caught my drift by now Shiny Hunting is pretty bad in Sword and Shield. I will say, however, that the shiny animation is pretty satisfying and a marked improvement over the Gen VII animation.