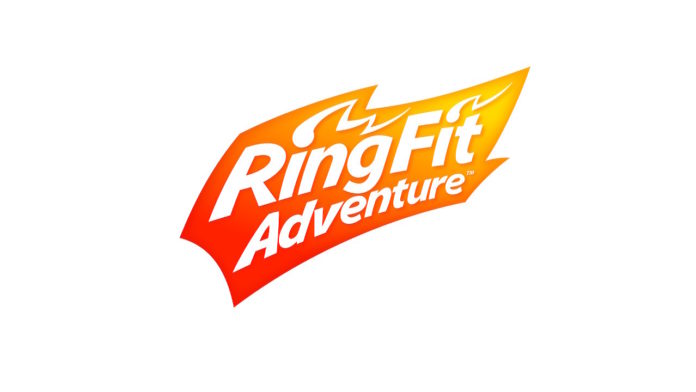 One of my New Year’s resolutions this year was to become more fit by exercising more. I’ve been keeping track of it using my Apple Watch and the Activity app. It shows calories burned, exercise minutes, and standing time. Since the beginning of the year, I’ve been talking walks around my neighborhood to meet my exercise goal. So far so good. My plan was to eventually introduce some more intensive work outs than just walking a couple of miles a day. This is where Ring Fit Adventure comes into play.

I’ve seen the commercials and the super creepy introductory video that Nintendo put out. Wanna rewatch that video? Well too bad ’cause I’m linking it here:

Despite Nintendo’s best efforts into scaring people into fitness, I held off on buying it until I had a $5 Best Buy voucher that was about to expire. Combined with my GCU discount, I figured I’d take the plunge. And let me tell you, it is no joke.

One of the things that Apple’s Activity app does well is keep track of your metrics while doing a variety of exercises. You can choose anything from tennis, to HIIT, to bowling. I scrolled through the options wondering if there was a regimen that was similar to what Ring Fit Adventure has you do. I wanted to make sure that my exercise minutes counted towards my daily goal. Well consider me surprised when I saw this: 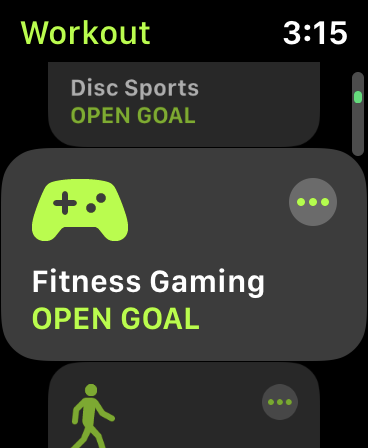 An actual category called “Fitness Gaming”! There was a small disclaimer after you select it but I dismissed it before really absorbing what it said. Anyways, now that my Watch was keeping track accurately of the type of exercise I was about to do, I was ready. 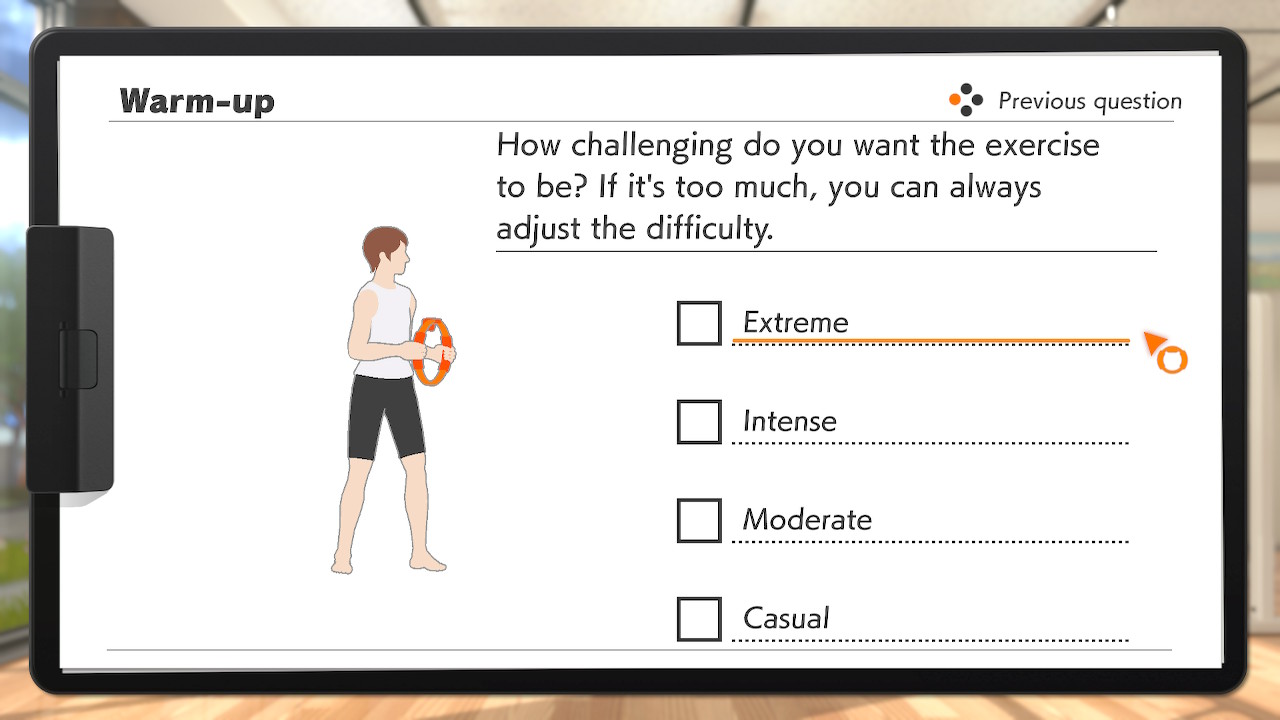 At one point while entering my body metrics and game preferences, I was asked how challenging of exercising I wanted to do. Being an overachiever that I am I opted in for “Extreme”. I had no idea what I was in for but luckily the intensity level can be dialed down or up depending on how you’re feeling.

Now this being a gamification of fitness, there is an overall story that you can progress. Your character comes across this ring that speaks to you set it free. It’s a sentient ring whose name is Ring and he tasks you to help him defeat Dragaux, an evil being whose dark energy is bad news. It’s pretty loose on the details, I mean it’s not going to win any game awards for story that’s for sure. But that’s not really why we’re here so that’s okay.

Traveling between the levels involves a lot of running in place and squeezing or pulling the Ring Con to get coins, open doors, or levitate for a short period of time. Along the way you’ll run into enemies that have to be defeated using a variety of exercises. It’s a preview of things to come because defeating Dragaux is very much the same set of exercises except more of them since his hit point pool is much larger. Once defeated he moves onto the next level where, again, you have to travel to his location to fight him and basically do the same thing over and over again.

This can get boring pretty fast but there are certain other objectives and things to do to keep the monotony at bay. There are other exercises that can be unlocked and used against your enemies. Coins can be spent on personalizing your avatar. That’s all I know about the side stuff as I haven’t progressed very far and neither have my kids. But it is something.

Now, aside from the loose story and gaming elements, the actual exercises are pretty legit. The Ring Con is the main apparatus that tracks your movement and provides the resistance for most exercises. The leg strap attachment is mostly used for tracking your steps to move your avatar along the path or up the stairs. I played through the first level which consisted of two stages and a the boss stage. The way you fight is to select an exercise and once you complete a repetition, you hit your enemies with a ghostly fist or foot causing damage proportionate to how good your form is. Meaning that, just like any exercise, you benefit the most by having good form.

In the case of fighting enemies, your damage output can range from 3-6 points. At least mine did. Your mileage may vary. I tested this theory by rushing through some repetitions of the Legs to Chest exercise, and didn’t squat down very far when doing Squats. So having good form is pretty important. It was made VERY apparent to me when I was fighting Dragaux and was just shy of defeating him by a couple of hit points before he knocked me out. Had I concentrated and executed good form throughout all of my attacks, I would have beaten him. This, if anything, reinforced to me that I can’t be messing around.

Just like any other exercise program, with Ring Fit Adventure you get out of it what you’re willing to put into it. Sure there’s a casual mode if you’re just looking for a way to play the game with a unique interface and don’t want to put in a lot of work. That’s what my kids chose. I picked Extreme level and immediately noticed a difference in the number of reps needed to complete an attack. For my kids, the Legs to Chest might be 4 or 8 reps, but for me it was 23 or so with the last 8 or so being done in faster. It’s pretty intense and I was left exhausted after going through the levels. 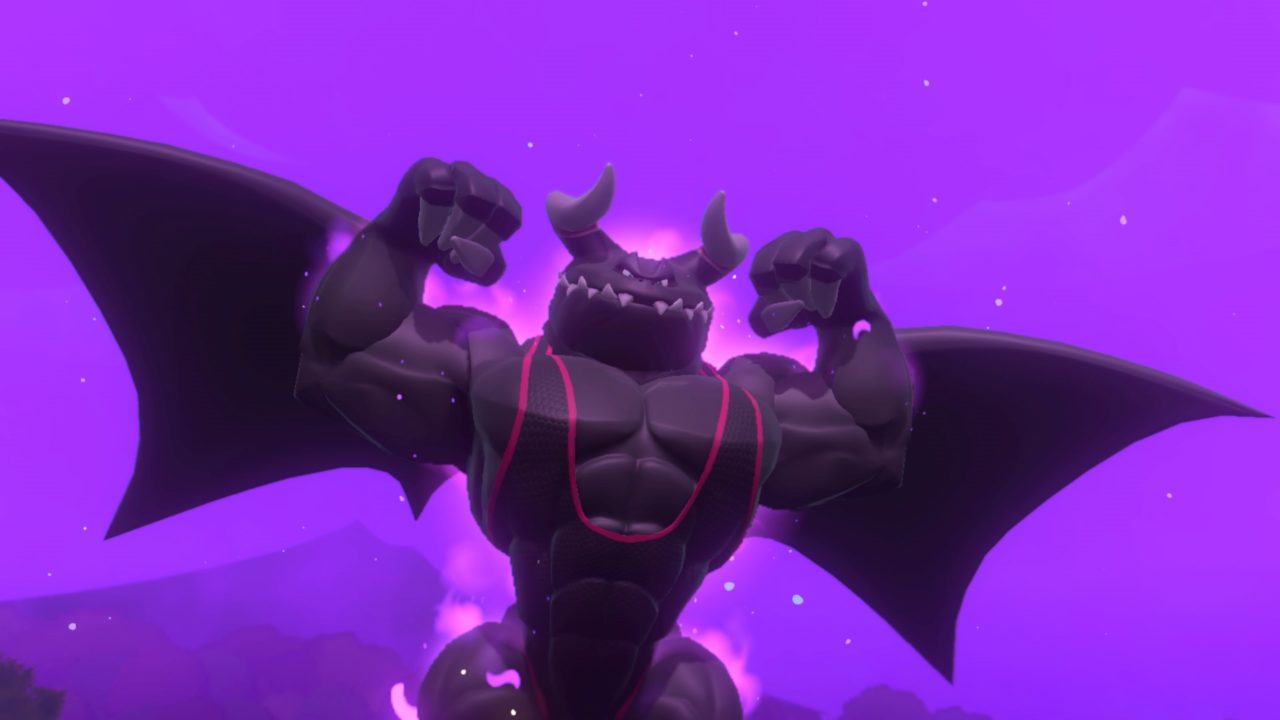 When Dragaux defeated me, I had the option to try again or quit. I waved the white flag, or in this case, the white towel and decided to quit. My legs felt like noodles, my heart rate was way up, I was sweating, and out of breath. I’m not very athletic, not like I used to be, so doing Ring Fit Adventure was a reminder of that but I’m glad I did it. Something is better than nothing so if there are days where I don’t feel like walking around my neighborhood to get my exercise minutes in, I can do a level or two of RFA and meet my daily goal. And if the story isn’t my cup of tea on a particular day, in addition to story mode there are mini-games that can be played. There’s also a “multi-task mode” where you can manipulate the Ring-Con while watching TV or doing something else and the data from the Joy-Con will sync back up to the game the next time it’s turned on.

After picking my sweaty self off the ground I checked out my Apple Watch and was happy to see the following: 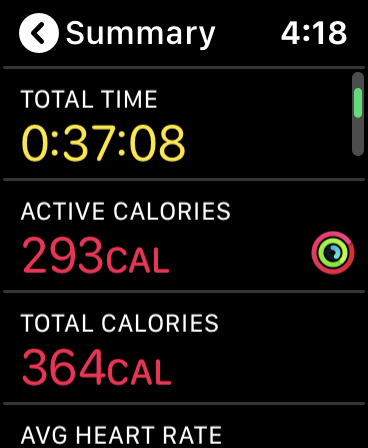 Exercise minutes, calories burned, and heart rate were on par with what RFA had recorded. Putting metrics aside, just the way I felt, and even feel now hours after my workout session, and seeing how eager my kid are to play it, there is no doubt in my mind that RFA is doing what it’s set out to do: gamifying exercise and making it fun. I’m giving it a 5-out-of-5-stars score for delivering exactly what it promised. I just want my family to be healthier and be more fit. This is a means to that end.

Serious athletes may look at this and think it’s just a toy or a joke. RFA isn’t going to replace crossfit, indoor cycling, power lifting, or any other regimented program. For a home solution though, I think RFA is great. I’d be lying if I said I didn’t have any doubts. I’m actually surprised at how effective it was. The workouts are tailor-made to your age, athleticism (or in my case, the lack thereof), and desired intensity level. If you’re looking to just get some exercise in and want to do it in the comfort of your own home, Ring Fit Adventure is the perfect solution.

I bought my own copy of Ring Fit Adventure for this review. If you’re interested in picking one up yourself, please consider using the below links to help support our site. We earn a small commission from any sales. And as always, we thank you for your support. 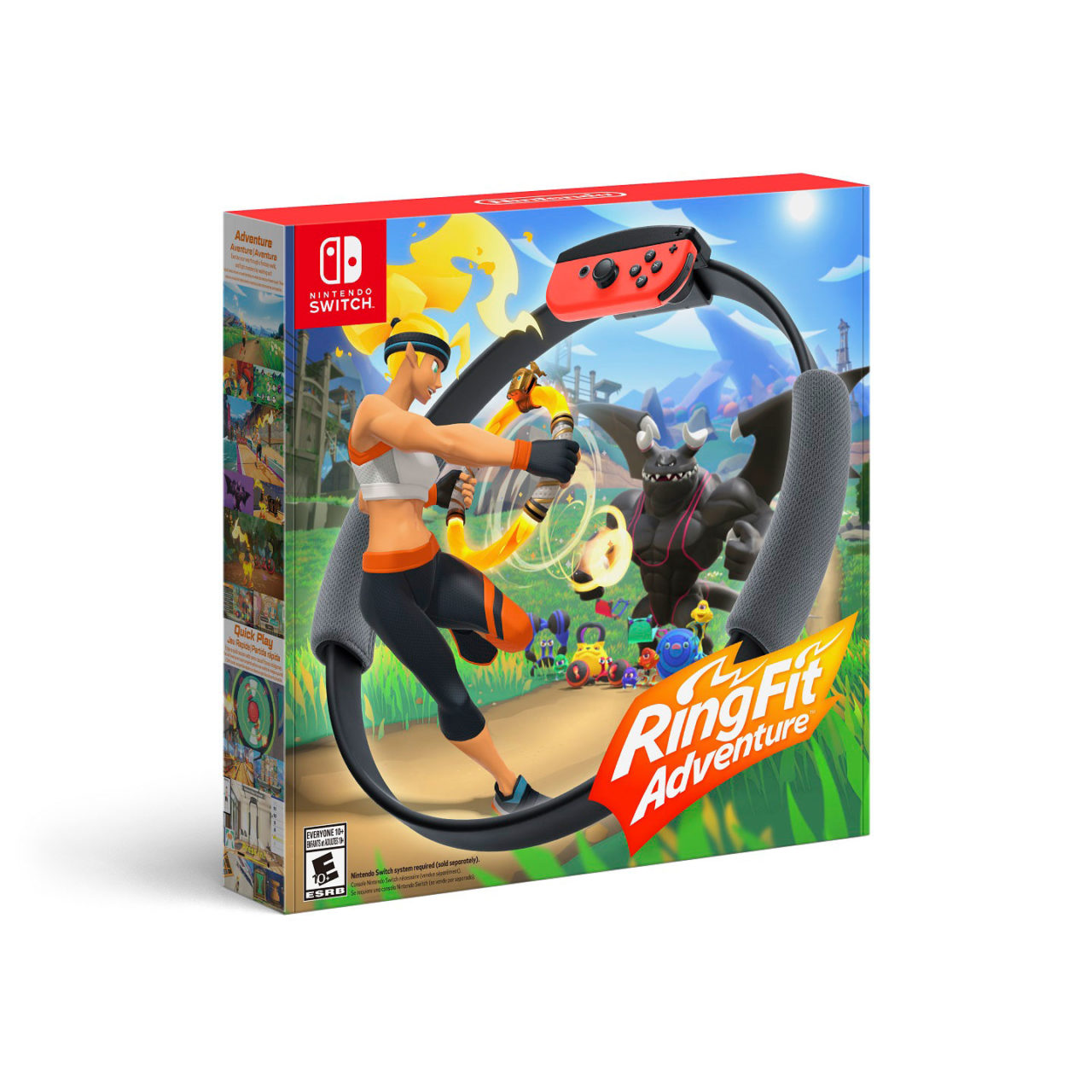