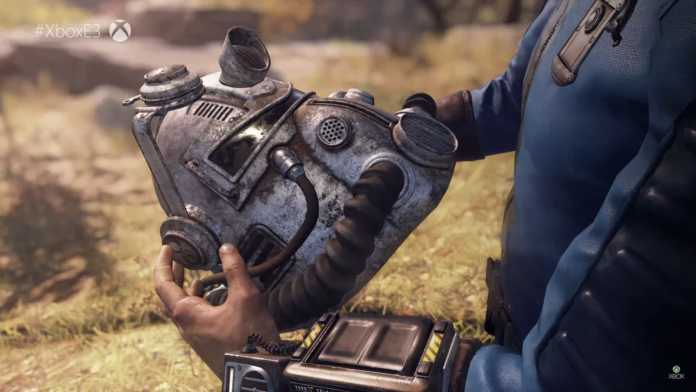 The opening weekend of E3, the biggest expo of corporations pretending they’re cool and a contingent of people saying you shouldn’t poke fun at corporations for being sketchy because they’re making games, has come and gone. This weekend brought us three big players, EA, Microsoft, and Bethesda. Last of the weekend offerings is Bethesda.

Note: Some of the trailers shown here have some language to them, so you’re warned. It’s usually pretty funny, but want to give a head’s up if people would like to avoid such things (or are like me, at work… put your headphones on).

I’m not going to say I was excited for this one or anything, but I came into work on Monday wearing my Vault Boy t-shirt. I want more info on Fallout 76… I’m not over the moon for it, but I’ll put up with a lot for another sweet, sweet, Fallout fix. Beyond that, as a company, Bethesda has put up a number of hits that I play all the time.

They aren’t a perfect company by any stretch, but it was pretty clear that they’re at least self-aware enough to poke fun at themselves. They’ve also now officially ended the “Skyrim is on everything” joke. I’ll admit, I laughed pretty hard at it when it played, and have watched it a couple of times since.

They opened up with Rage 2, which is a game that id Software made a few years ago that only a couple of dozen people played. I have it sitting in my Steam account (one of about 900 games I haven’t played yet on said account), so I guess at least I bought it at some point.Â The trailer looks fine, fun even… but mostly it reminds me of Borderlands but less cell-shaded. More of a wait-and-see, but not something I’m likely to grab day one. Also, Andrew W.K. is still alive and performing, so good for him.

This sort of set the tone for the night with Bethesda… nearly everything was a sequel or an expansion pack for an existing property out there. Doom is getting a sequel, called Doom: Eternal; I know a lot of people that loved this game, but it didn’t grab me when I played it. I recognized that it was a good game, but wasn’t in a Doom sort of mood.

Prey is also getting some love, with a big expansion and a new multiplayer mode, and a lot of it came out during the show. I can’t tell you much about this game, I haven’t played it and, unlike most everything else they showed, don’t own it. I’ve heard good things, so more of it is great.

Wolfenstein also got some love, with a new offshoot game that’s half sequel to the recent Wolfenstein 2 (which is actually like Wolfenstein 6 or 7), starring the daughter’s of that game’s protagonist. I also liked how the guys opened, with some salty language about killing nazis. It showed quite a bit of the potential game, and it looks fun, but I’m not a big Wolfenstein player. I will probably pick it up on sale, eventually, and it can join the other 900 games that I picked up on sale. They also announced a new Quake game, which looks like its taking a page out of Overwatch’s book and marrying that to the style of Rage 2 (and, by proxy, Borderlands).

But I waited through all of that stuff for more details on Fallout 76, the latest installment in the franchise I love so much. I’ve been playing Fallout since the very first game… I still have my CD copies somewhere. We had been warned, through initial statements and some leaks before hand that were likely tactical on Bethesda’s part, that this one was going to be different.

Fallout has been a 1st/3rd person single-player RPG for nearly all of its existence (Fallout Tactics need not be spoken of in polite company), but Fallout 76 is going to break part of that mode by going online-only. The story behind it feels sound… Vault 76 was the first vault to open after the war in the game lore, and these are the survivors finding their place and rebuilding. Potentially, there’s a lot of fun to be had here, and it does fit the survival genre mold solidly.

That being said, it’s the “only online” piece that gives a lot of people, myself included, pause. I’m a big MMO player, but I dislike PvP that isn’t opt-in, and don’t want someone else to decide they’re going to ruin my fun in a game. I’m also not as big into straight combat-survival games… survival games need to have more of a co-op presence to grab me. Luckily, for the most part, 76 looks to be taking that tact… there’s still PvP, and not a lot of details on how it will work, but also focus on building, co-op, and PvE.

I’m still not over-the-moon for this game, but I’ll admit it looks gorgeous, and I am going to play it when it comes out. I was one of the lucky few who managed to sneak in a pre-order for the Power Armor edition, but I’m going to go into it with some tempered expectations. I love the settlement building in Fallout 4, but also modded the crap out of it to my own ends. That won’t be an option in an online game, and the whole addition to nukes could be an alienating thing. My hope is that they’re going to take a page out of Conan Exile’s book, and let people set up their own servers and rulesets within the world.

At the same time, it’s pretty clear that this is made with the love of the Fallout team. Yes, most of us wanted another New Vegas-style game… and it could be that something like that is still coming in the future (please let it be coming in the future), but for now, it’s more Fallout. Also, the map glows in the dark!

You’d think that was the biggest news of their conference, but for some reason, they followed that up with news that Fallout Shelter is available on the Nintendo eShop right now, and that there’s a new Elder Scrolls game coming to mobile, called Elder Scrolls Blades, and it’ll be another “free” mobile game. Sadly, free on mobile usually means laden with micro-transactions, but Fallout Shelter wasn’t too bad in that regard… so there is a sliver of hope around it. Unfortunately, they also gave us the dumbest line of the night when they said you can “pre-order” their free game right now. They’ve since changed it to “pre-registration,” but still…

Towards the end, they also decided to drop a couple of bombs that were basically teasers for a title screen banner, and nothing else. First is the long-rumored (and leaked about) sci-fi IP they’ve been working on. It got a name, called Starfield, and that’s it. We saw an animation of a satellite around a garden planet, and nothing more.

After that, towards the end, they also let something else drop…

*bleep* me, there goes a few months of my life. No word on when, or what, or where… just that it now officially exists. I mean, they were always going to make another one, just like there’s going to be a Fallout 5 someday. But to see it made official… *shudder*. My money is we won’t get it until 2020 at the earliest, with a bigger reveal at the next E3, but there will be some Elder Scrolls in our future.

Curiously, the note given about it after the conference called it a “next gen” game. Hopefully that means still this gen but finally living up to the promise of it and not for another generation of consoles. I’m not ready to upgrade yet, and I don’t think a lot of others are either… but I also want some more Elder Scrolls (that’s not a mobile game or Skyrim again).

While EA made me roll my eyes a lot, and Microsoft gave me a lot of games that look fun… Bethesda got me excited and had me making pre-orders (something I normally hate doing)… so yeah, it was a good press conference in my book.