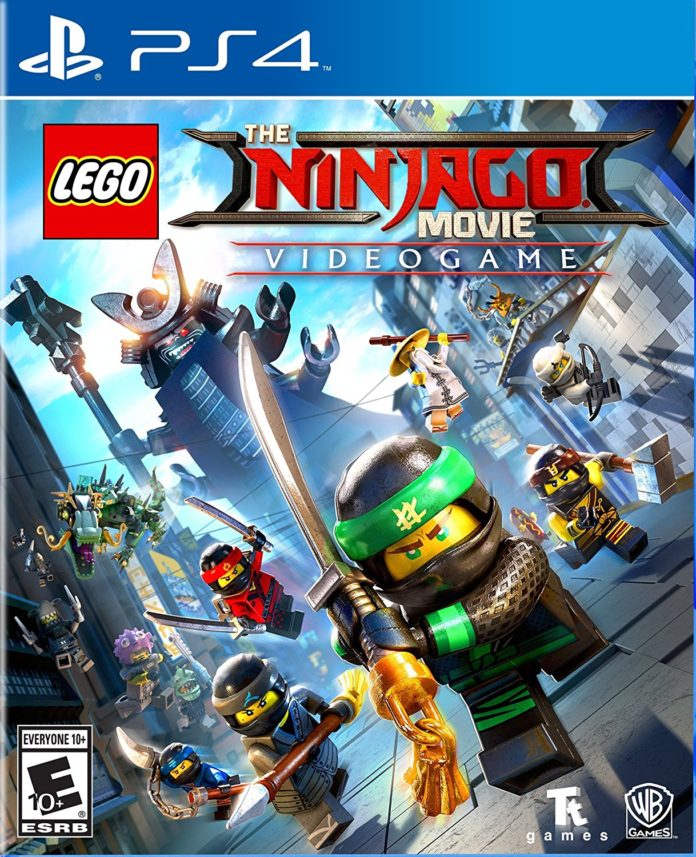 I wrote this review for The LEGO NINJAGO Movie Video Game while in line for the SNES classic yesterday morning at 4am so my thoughts are kind of everywhere and I may jump from topic to topic, so please bear with me.

Disclaimer: I’ve never played a LEGO video game I enjoyed. I’ve bought the games, sure, mostly to get whatever minifig was tied into a pre-order promotion. I’ve played maybe a couple of them once or twice, but never found any of them compelling enough to actually keep playing.

The last game I really, really tried to play and get into was probably the very first LEGO Star Wars game. Yes, that first one from way, way back. It definitely had a charm about it: LEGO Star Wars minifigs coming to life with their tap-tap-tap three hit combo, the ability to deflect blaster shots back, exploding death animations. I mean, how cool was that the first time you saw it, huh? But to me, it just wasn’t enough. Plus, the game was based on Episode I so really, what was the motivation?

There’s been a ton of games in between that one and this one and none have really piqued my interest for one reason or another.Â However, that all changed with The LEGO NINJAGO Movie Video Game. TLNMVG is based on a movie that isn’t doing too well in the eyes of the critics, but the game, man, you’ll forget how good or bad the movie is, the game is where it’s at.

The LEGO NINJAGO Movie Video Game follows the script of the movie, or so I’m told. I haven’t actually seen the movie yet but intend to at some point soon. It’s spread over more than 12 chapters; I don’t know exactly how many there are since I’m not quite finished with the game yet and am about to start Chapter 12. You start the game off in the training dojo, where you learn all the different attacks and combos you’ll be able to unleash onto your unsuspecting foes. Right after that you’re thrust into the opening act.

You’re limited to just two characters per chapter when you start, and it’s not until around chapter 7-ish or so where you’ll have a larger party of most of the ninja characters. Each ninja has their own set of signature attacks and moves based on their weapon. And if you’ve ever been a fan of old kung-fu movies, you are in for a treat. 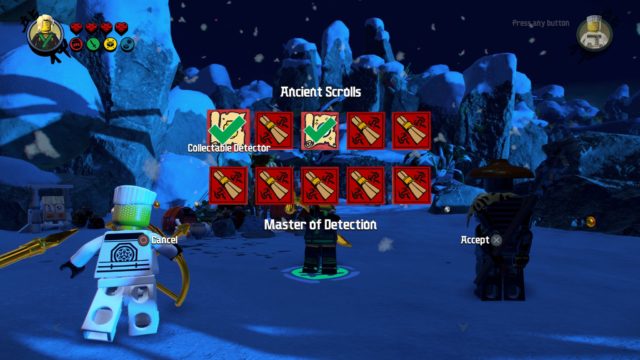 Ancient scrolls. The only Ancient Scrolls I found were Master of Speed which lets me build stuff faster and Master of Detection which shows the location of secret items with colored arrows. I only unlocked those two scrolls but am dying to find more to see what they do. They both made the game SO much better. The fast build alone is worth seeking out. I don’t even remember when I got it, but I didn’t activate it until much later cause I had no idea that they had to be turned on. That begs the question of why couldn’t they be passively active once obtained? In any case, it makes the building parts of the game fly by.

The Master of Detection ability show where all hidden items by way of little colored arrows visible on screen taking some of the guesswork out of where the secret items could be. Of course, knowing where they are and actually getting to the item are completely different stories.

The environments. The environments are sprawling and feel huge. And thanks to the little blue markers, you’ll never feel lost or wonder where you’ll have to or what you’ll have to do next. Their size and scope is just begging you to explore every possible nook and cranny. Try as I might to just burn through the level, I always feel myself getting sucked into finding that next hidden path or possible golden brick or even a minifig pack. The puzzles and obstacles are never impossible aside from specific abilities that are needed to unlock a door or something, so it always feels like you’re just one button press away from getting something good.

Combat. Oh man, the combat. I can’t say enough good things about the combat. The combat in this game feels so fresh. I found it to be extremely engaging and fun. And like I said earlier, if you’re a fan of kung-fu movies, you’ll appreciate all the work that went into each ninja’s signature move set.

Each ninja still has that tap-tap-tap three-hit combo but they are different for each character. There’s a fast dash attack that you can do between enemies that let’s you chain combos. It doesn’t sound like a big deal, but it makes combat feel faster and so satisfying just tearing through a wave of enemies. There’s a dodge move that, to be honest, didn’t seem to work very well; either that or I’m just terrible at dodging attacks. The Skyward Dragon move? Freaking awesome and SO fun. It’s not something you can activate all the time, though. Combos are triggered when you hit the circle button right when you’re prompted, so sometimes it’s a hit and miss. But once you connect and then start tapping the square button furiously, that’s when the magic happens.

The hack’n’slash format has never been exemplified more perfectly like it is in TLNMVG. The combat is the most enjoyable aspect of the game to the point where I actually looked forward to taking on enemies and wished there were more. But this being a LEGO game, it strikes a balance between exploring, combat, and puzzle solving/platforming, but I wish it leaned slightly more towards the combat. That is how fun it is. My favorite character? Definitely Cole and his hammer. It swings slowly, but lands with a satisfying thud when it connects.

The come-here-next markers. it’s easy to get lost in the huge environments just exploring and trying to get some of the hidden items. So that little blue marker on the screen telling you where to go to next was helpful in keeping you on track. And I went off track a LOT.

The loading times. you can probably make yourself a snack, build a LEGO set, and do a load of laundry during the loading screens between chapters. I’m more or less convinced that it’s due to the full-motion, pre-rendered video, and not so much loading the game elements. I can understand why they did that. It makes the game tie-in to the movie much more obvious but then when the following cut-scene is rendered in-game, I wonder what the point was. The visual quality is pretty damn nice with in-game graphics. So nice in fact, if they changed the FMV cut scenes to in-game video, I doubt people would be up in arms about it let alone even notice its absence.

Icon size. Some of the icon sizes are really small. Even on my 65″ tv, I had to get up a few times and take a closer look to see what some of the icons were on some of the characters. Certain characters have certain abilities you have to use to progress in parts of the game or break open certain items indicated by these tiny-ass icons underneath their portrait in the upper left corner. I don’t know who has blue dynamite but once I figure that out, I have a couple of levels to replay.

And you know what, I think those are really my only complaints, and that should say a lot. I like to complain and I had a hard time finding things to gripe about. The general format of the game hasn’t changed: collect studs, build stuff, unlock characters, replay levels to find the hidden items, etc. That’s the DNA of LEGO games and hasn’t changed much from games past and probably won’t in future games either.

As much as things stay the same, The LEGO NINJAGO Movie Video Game makes a gigantic evolutionary leap forward. Some of the game enhancements through the ninja scrolls are welcome changes, and you know what? Rather than just eliminating the mundane tasks, they made objectives out of how to make those mundane tasks more digestible and, dare I say, fun. There’s a ton of characters to unlock still, and levels will have to be replayed to get all the hidden items. Like I said before, it offers a lot of replay value for the money you pony up.

In the history of LEGO games, The LEGO NINJAGO Movie Video Game is their crowning achievement. I’ve played demos and watched videos of their other LEGO-based games and nothing really caught my attention enough … until I saw that video of the Skyward Dragon move on Twitter. I took a chance and carved out some time while at Comic Con to play the TLNMVG demo and boy was I glad I did. I’m having a lot of fun playing it and will probably spend the next couple of days, maybe weeks, to try and get 100%. I’ve been stupid busy at work lately, so I haven’t been able to play the past couple of days but look forward to the next time I can. This is a game worth picking up and adding to your library. I’m giving this sucker 5 stars. Yep. It deserves it.

This review of The LEGO NINJAGO Movie Video Game was based on the Playstation 4 version of the game. WBIE provided a copy of the game to FBTB and that in no way influenced our review. Purchase TLNMVG from Amazon today for Playstation 4, Xbox One, or Nintendo Switch.