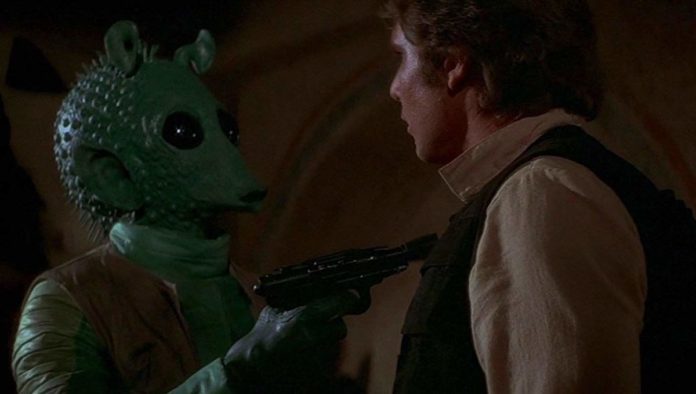 George Lucas may have exited the Star Wars universe for good when he traded his signature creation not called THX for a Star Destroyer full of money… but that doesn’t mean he still doesn’t have stuff to give to everyone hidden deep in the archives. With the “launch” of Disney+ earlier today, the dozens of people that were actually able to log in were treated to a few surprises in the Star Wars movies that now available on the streaming service.

Surprises like yetÂ another change to the infamous at this point scene between Han and Greedo. You know, the one that fans have (okay, I’ll admit, kind of rightfully) been up in arms about since it was changed way back in 1997 with the release of the Special Edition, and later made worse with the DVD release where it was revealed that Greedo was a fantastically terrible shot.

Apparently, he never meant to shoot Han at all, it was all an involuntary reaction that unfortunately included a blaster and what I can only assume is some sort of severe muscle spasm… and then shouted “Maclunkey.” Han didn’t know that, though, so he had to blast poor Greedo. There’s at least a little bit of irony here, since the whole point of Solo, and in particular his actions towards the end, were to show that Han could absolutely be a stone-cold killer.

In the Disney+ version of Star Wars Greedo now shouts "MACLUNKEY" before getting shot. This is now my favorite version because why the hell not? MACLUNKEY! #starwars #maclunkey pic.twitter.com/k1XmP8wAZT

Before you jump and blame Disney for this, based on their initial statements, they’re punting it right back to George. Apparently it was an unreleased changed on the 4K/3D remaster that never happened when Lucas sold the company – that’s the version that’s up on Disney+ now. Dear Disney… if you want to get a bunch of goodwill with fans, why not release all of the various versions of the movie up on the streaming service. Or maybe let’s go all Bandersnatch and choose your remix version of the trilogy.

Let’s go ahead and file this to bring back up when the manbaby brigade cries about Lucasfilm leadership or the direction of the franchise and demands that Lucas be brought back to make more Star Wars. That being said… this is still not as bad as the Noooooooooo added at the end of Return of the Jedi. At least we can laugh about this…