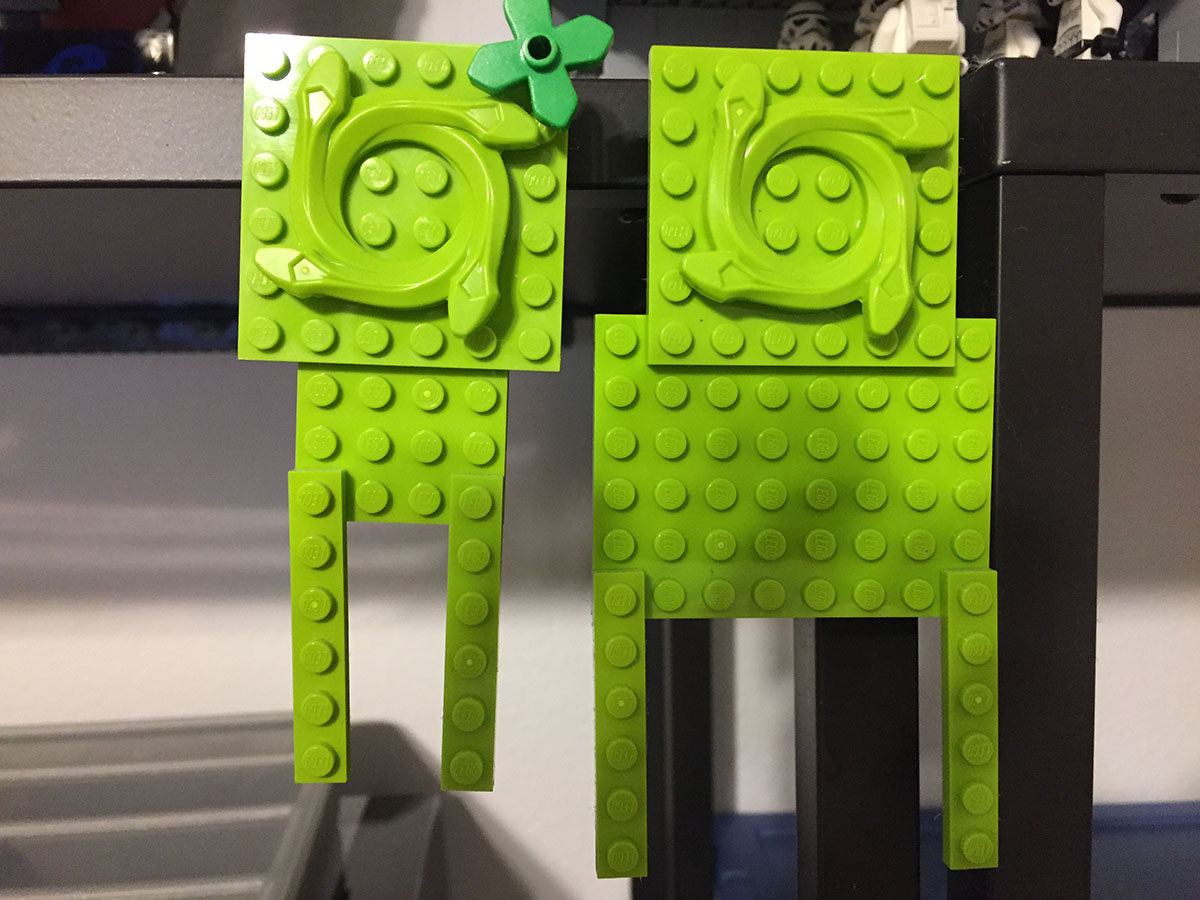 Hey, Nick here. You may have noticed that it’s been quiet around the site lately. There are a multitude of reasons for that, honestly. The active staff members all have full time jobs, and currently that means we aren’t always able to post. More than that, we have families and kids in school, and that sucks up a whole lot of time. Ace posted his reasonsÂ the other day, and they sound very familiar. Myself, I have a newborn son and a daughterÂ that started school, and that has been consuming a whole lot of my free time as of late. As of late, the most I’ve been into LEGO is in playing with her… she’s been playing with them for a good portion of her life at this point, and the picture above is the first “MOC” she made and could describe… and it was of us.

Shortly after my son was born, I started going through a bunch of my older stuff and selling off duplicates, things I hadn’t used in years, etc. While I was doing it, I came to a realization… that I didn’t really care all that much about getting rid of the stuff.Â That was really driven home when I opted to get rid of a crown jewel of my collection… my Chrome Gold C3PO. The motivation wasn’t one of space or really needing the money… it was more about selling it to someone who would want it before my kids grabbed it and started playing. I hadn’t used it in a display for years, to be honest… it doesn’t look right next to the other figures… and didn’t miss it.

That little endeavor made me realize something; in the past year, I’ve bought maybe a half-dozen total sets for myself. Most sets that I’ve purchased were for reviews, and there are several of them that are sitting in draft here on the site waiting for me to finish them (dating back to about a year, ago, sadly). Sets that I really wanted, like the Saturn V rocket and the Modular buildings, have gone un-purchased, and when it came to stuff like Star Wars, the core of this site, it was even worse.

The last time I bought a Star Wars set was probably sometime last year…Â the last reviewÂ I did for a Star Wars set was in December with a set provided by LEGO, and before that it was nearly a year ago. Don’t get me wrong… I still love Star Wars. I loved Rogue One and I’m extremely excited about The Last Jedi… I just find it hard to get excited about the stuff that’s come out lately. There are some sets that I would like to get… or more accurately, some characters (looking at you, Thrawn), but I keep picking up the box and putting it back down. After selling off some sets, the reason for these changes made me realize that LEGO just honestly wasn’t all that important to me anymore.

A good portion of that is on me; I’ve changed in the nearly two decades I’ve been collecting LEGO. My collection has long since become too large to be manageable, and probably less than 2% of it is on display at any given time. That’s a whole lot of money to put into stuff that’s sitting in boxes, bags, and bins. I was never much of Â MOC builder… I liked it, but didn’t have the obsessive drive that a lot of people do.Â Yet bins still fill my wall and go unused for the most part. When I do actually build these days, it’s because my daughter wants to build, and I can use the time to teach important life lessons about why she has to keep the Barbie MegaBloks set she got for her birthday apart from the rest of it.

But I’m not going to say it’s all on me. LEGO has made it exceptionally hard to be a fan in recent years. I’ve made more than a few snarky comments about how LEGO does their reveals on far bigger, and typically unrelated, sites. But it’s really worse than that… we often get ignored for news, sets, or the like. Sometimes LEGO is nice when they want publicity, like when they sent us the LEGO Batman and LEGO movie sets. But they ignore us most of the time, even when we ask just for press releases or the like.

Outside of the press aspect of it, though, just being an AFOL has gotten difficult in recent years. I’ve called out price on reviews more than once, or just the flat lack of creativity that runs through the huge majority of LEGO sets at this point. It feels like a good portion of their sets are just the “stock” build they need to slap a look on between all the different lines. The jets in the Marvel lines, the stock playset like we got with the Batcave… things like that. Worse, the price of LEGO, specifically the price in the AFOL ranges, has gotten just plainÂ stupid in the last couple of years. The new UCS Falcon is a ridiculous $800. I don’t care how many pieces it comes with or the size, that is, quite simply, too much. Heck, $500 was probably too much for the first one, but at the time, it was unique.

It’s not just that set, though. The last few UCS sets have been disappointing, if I’m being charitable. Sure, the Snowspeeder looked cool, but I was sick of those in the system line, and it just continued the price creep in sets. The last modular building was $280. The carousel was $200. The Saturn V Ideas set was $120 and the fishing shack was $150… together more than all of the other Ideas sets I’ve ever bought, combined (and I’ve bought several of them). At a time when i’m having trouble convincing myself to spend money on a $25 set (that should have probably been $20), seeingÂ these prices makes me want to just walk away in disgust.

And from a creative point of view, LEGO seems to only care about their original themes or movie tie-ins. The LEGO Batman movie sets were fantastic, the Ninjago ones look cool (but I could not care in the least about Ninjago). Yet Star Wars has been mostly remakes that are less stuff for more money, or reskins of other builds that are swapped in for something else. The most recent Super Hero sets are just overpriced junk for the most part, and even someone like me gets tired of dropping that kind of money for ugly sets and a few minifigs.

I suppose looking back, a Dark Age was inevitable for me. For years, I’ve purchased a lot of sets I wouldn’t have otherwise touched because I was going to review them. I genuinely like writing reviews and getting my snark on, and will keep doing it. Maybe I’ll finally finish one of the half-dozen movie reviews that I’ve started (in the case of Force Awakens, I have two different review drafts for a review) and get them up here. I may also be putting up more opinion pieces… some of those are the most pride I’ve had in what I’ve written for the site. But for the foreseeable future, I’m done purchasing LEGO for myself. Much like Ace, I’m burnt out, even if for different reasons. I’ll probably be working on some of the changes around the site, and maybe trying to fix some stuff.

As we open up to more stuff, perhaps I’ll branch out too (though it may be a hard sell to post most of my hobbies like painting miniatures or role playing games here). I’m learning what it’s like to share a hobby that was a bit part of my life with someone who’s just starting out on hers, and there’s something kind of magic in watching her. I don’t know yet and haven’t made any plans, but also knew I wanted to get a statement in too.

tl;dr… I hate the entire idea of tldrÂ and refuse to summarize here (but I bet you can guess by the title).