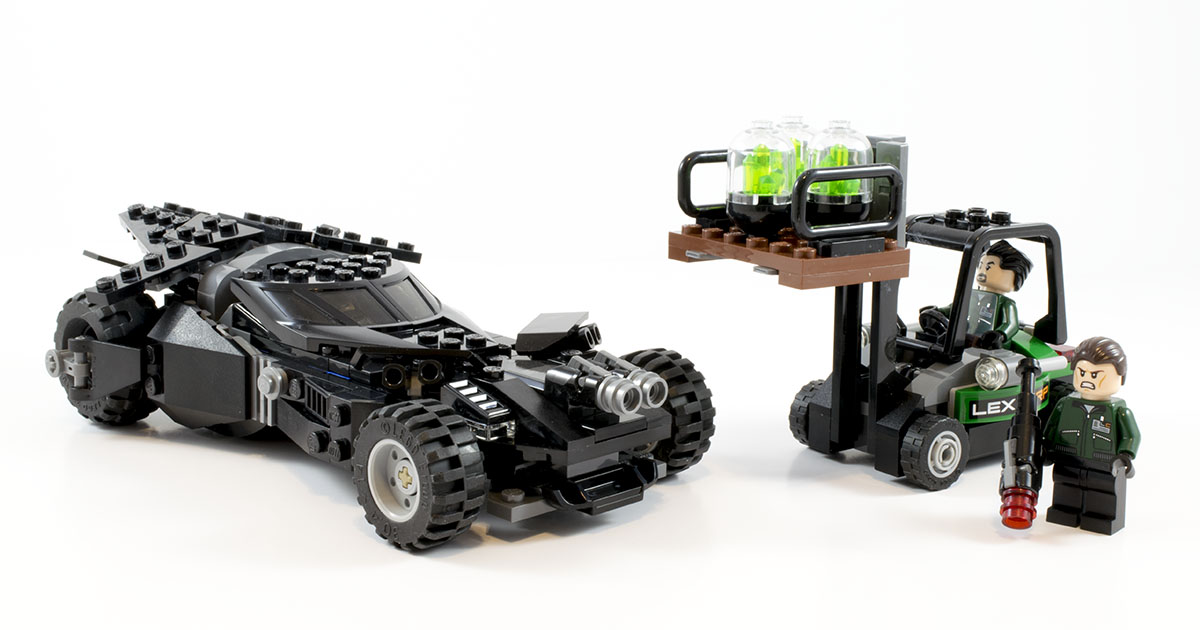 I have to admit that it was entirely unintentional to do all of the reviews of the Civil War sets before I saw the movie (which was very good), but do the most iconic set of Batman v Superman after I saw that rolling dumpster fire of a film. It’s kind of weird, since the Civil War sets I would describe as average (all three sets got a 3 out of 5), where I enjoyed the movie a lot more than those. I absolutely hated BvS, yet I really enjoyed this set (the last one I reviewed… not so much).

I had very few expectations of this set for a variety of reasons. The biggest, and what is probably a big black mark for my nerd cred, is that I don’t care all that much about the Batmobile. I like the classic design, and the original Burton/Keaton Batmobile… but it just tends to get a bit more ridiculous every time we see it. In a setting where our hero has helicopters, jets, space ships, jet packs, and the ability to swing around the city… why go for the option that’s the least efficient way to get around? Worse, even before BvS clouded all of my judgement, the only bits we saw of this vehicle were behind a broody Batman and processed through that trademarked “covered and dirt and left in a pile of waste” Snyder filter. In bad lighting. Basically, there wasn’t much of a reason to get excited about it.

I built this set long before I saw the movie… probably before I saw the spoileriffic trailers, even, and was pretty shocked that I liked the build a lot. I’m a sucker for a decent vehicle, and I love the accessories and practical parts in a set. That this set had a forklift and henchmen instead of some absurd villain tool (looking at you, Bane, and that stupid drill) was a huge plus in my book. At 306 parts and only a $29.99 price tag, this set seems, on its face, to be a pretty exceptional value compared to other stuff. We get the most iconic vehicle, a hero, and henchmen, all for one of the lower price ranges. Plus, of course, there are some new cockpit windows that I think we are all going to want for… everything, and of course, fork lift.

But this is a set based on a movie so devistatingly awful that it’s been classified as a war crime in some places, so there has to be something wrong with it… right?

I think before the end of everything with BvS, it will be remembered as the film that ruined so many other things. Sure, some of the blame can also be heaped on Deadpool (which is awesome, but likewise has a negative effect on other movies), but this movie had a Director’s Cut / R-Rated version announced before the public had ever seen it. BvS has already driven off one director that could have improved something, and it’s likely going to try and turn Aquaman it’s a spy thriller or something. So maybe we should enjoy the sets while we can get them.

We certainly have gotten other sets with henchmen before, but have we ever gotten only henchmen in a set? Maybe theÂ chitauri, but I think those always had Loki (and they were more like grunts). Otherwise, one of the problems I’ve always had with Batman sets is that it was hard to get henchmen in decent numbers, especially for people like the Joker or Two-Face. Either you had to buy an expensive set to get them, or you only could get one or two and ended up with too many Batmans. 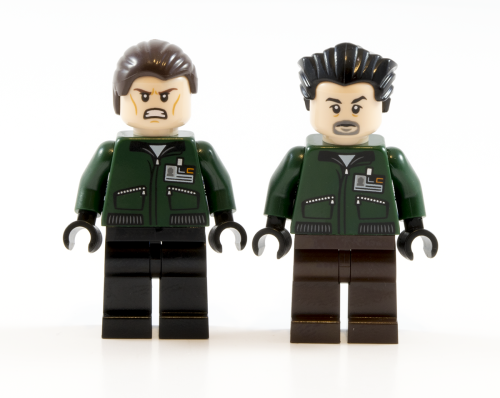 Here, we have a relatively cheap set with a couple of generic guys who were nice enough to wear company swag and badges to an illegal smuggling operation. Oh, and they brought company equipment to leave behind as evidence. If Batman in this universe was actually the World’s Greatest Detective, this is a pretty open-and-shut case to at the very least bring down the company and get all of his assets frozen while they investigate. 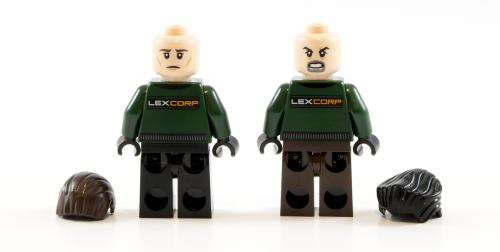 Both of the figures have a minifig, revealing that guy with black pants is actually Legolas and the guy on the right the security guy from Jurassic World who somehow survived being eaten. I guess LexCorp really is a company of second chances! 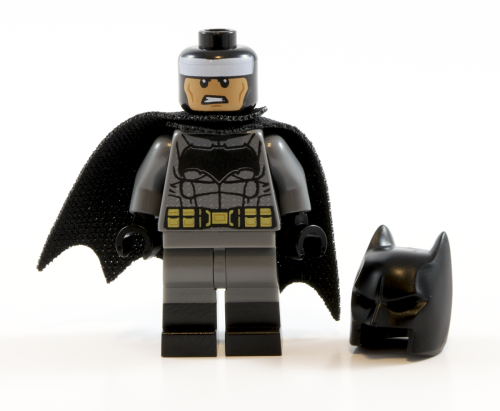 I’m trying to remember the last time we got a unique Batman minifigure. I think it was last Thursday. Okay, that’s not all that fair, since obviously we were going to get a Batman minifig in this set. I liked the armored version in the Clash of the Heroes set (though after seeing that movie, Wonder Woman is the only one that could even kind of be called a Super Hero), but this whole snow boots look we’ve gotten with a couple of figures has got to go. 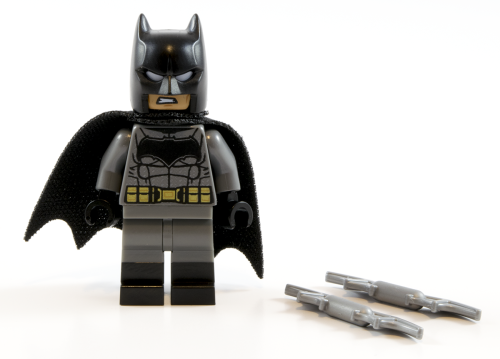 This figure also appears in the other BvS set (which I’m not planning on reviewing, and not sure anyone else has any plans to buy it… sorry), and the only truly unique part is the torso. The legs were also in the Funhouse set, the cape is Batman’s cape, and that cowl has been the new look for Batman figures recently. 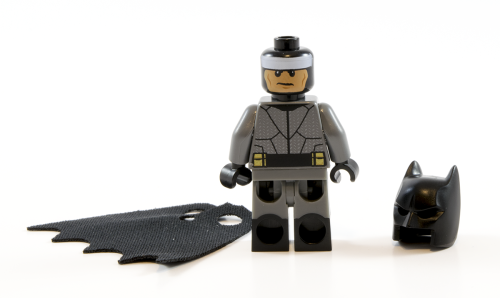 I don’t have any problem with the inclusion of the figure in a set that’s obviously about Batman, I’m just not a huge fan of this particular variety of Batman. I can’t knock LEGO for that, really, because the whole DC look right now has taken all of the unique nature and charm out of the costume and character. I mean, I don’t think he even used the utility belt at all in the latest movie, unless that’s where he keeps the cigarette lighter that charges up his brand. 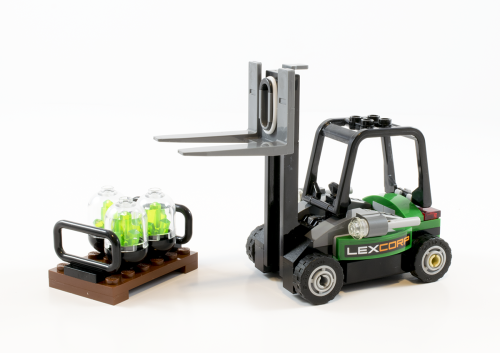 I’m always a sucker for little vehicle additions that are practical showing up in a set. Stuff like the luggage cart in the Super Hero Airport Battle and the Banana Cart in the Gorilla Grodd set always end up being some of the things I love the most. It’s not always the most perfect selection (those flick-fires, for example), but they’re often easy to fix and drop into other existing sets. 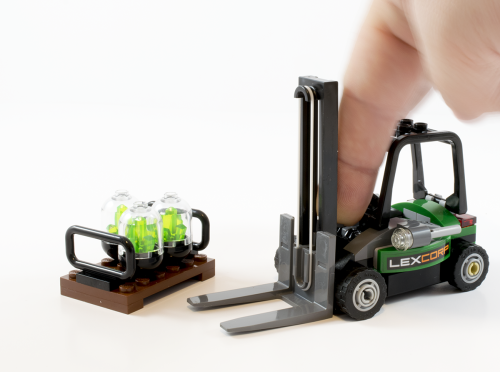 My biggest knock, past those flick-fires, is that the lift defaults to an up position because of how the rubber band is placed. It just seems like the default position would be down (you know, like a real fork lift), but the part design makes that impossible. The only way to make it work in the down position is to remove the rubber band, thus negating the whole feature.Â Even with that, though, this is still a great little thing. Take those stickers off (or leave them on) and you have a great little construction addition. I’m pretty sure I can get most of the parts in yellow and make it work with my other construction stuff.

Of course, this set is really just a Batmobile set, and the lrest is just a bonus. I wasn’t a huge fan of the vehicle we saw in the teasers, and wasn’t of the vehicle in the movie… but I’ll also admit it was a vastly better “Batmobile” than the Tumbler ever was. That being said, this is just a nifty little vehicle, and an instance where being LEGO sort of helps it (and being a bit inaccurate actually improves the vehicle). 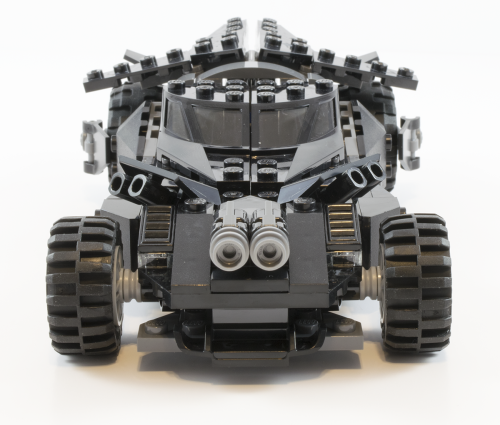 When I first built this set, I wanted to knock it for all the silly weapons on the front… but of course we all know that if anything, this set underplayed the weapons. They’re in the wrong spot here, but they’re also in a place that makes it easy to remove them and just put a slope on the front. Likewise, those little smoke-launchers / rockets that stick out the front can be taken off and reshaped into something a bit nicer as well. I like the idea, the execution just isn’t that great. 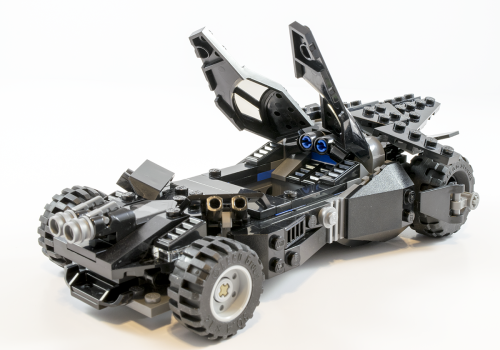 The real star, though, is the new cockpit windows made for this set. Unfortunately, as awesome as they look, they’re probably the worst par of the entire build… I found it almost impossible to open the cockpit without also pulling off the brick that was meant to hold it in place. There’s simply too much tension needed to make it work, caused by the friction pins used to keep it upright. When they are closed or up, however, they look great. Best of all, they’re stylized but still generic enough that you can use them in almost anything. I very much look forward to seeing all the MOCs that incorporate these into space ships and the like. 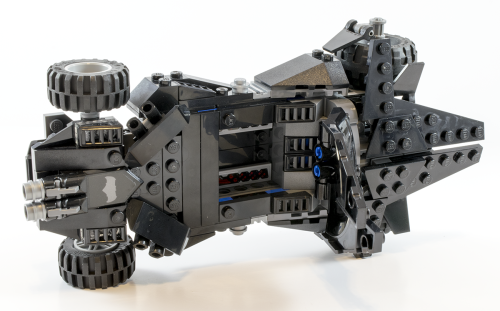 It’s kind of hard to pin down why I like this car, despite its flaws. It’s not the best version of the batmobile, and it has some build missteps, but it’s just a nice little car with some really nice parts. Even if I don’t like the source, I can recognize the style that went into making it, and this was a decent build for it. There are also some nice little parts here, as well, and plenty to like for what you get.

I liked this set a lot when I first put it together, which was thankfully well before I ever saw the film it was based on, and still like it a few months later. For the price, only $30, you get a solid build, a forklift, and a couple of henchmen, and that’s some pretty nice value. Those cockpit / canopy windows will likely be a hot part in some builds, and even if it’s not, it’s the kind of part you just want (like those Jurassic Park bull things). In short, a decent little set that’s worth the money, even if it has its flaws, landing on my list as aÂ four out ofÂ five.

Verdict: 4 out of 5. You can buy 76045 Kryptonite Interception right now on Amazon.com. It was sporting a 10% discount when this review was first posted. 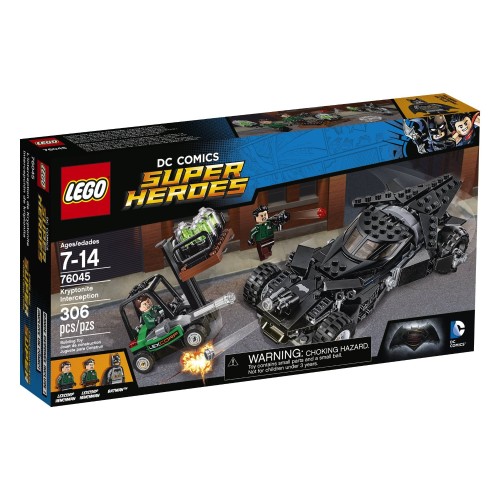