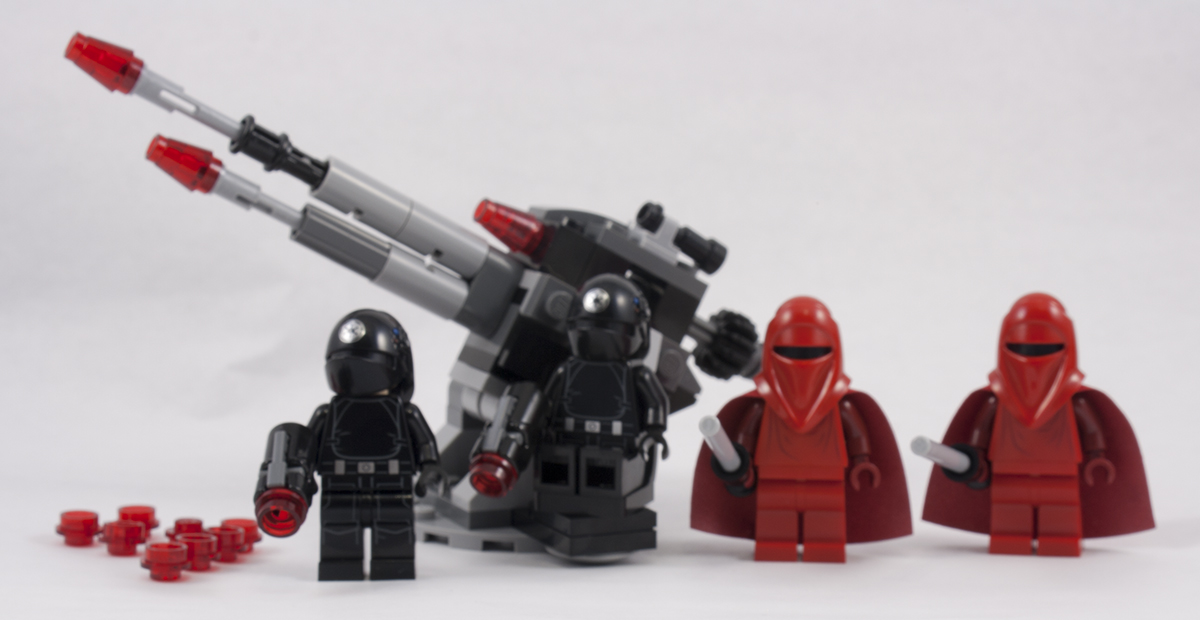 When the first leaks showed up with pictures of a proper Death Star Gunner, I think the general reaction for fans was “It’s about time!” I mean, we’ve had two Death Stars, including the huge Death Star Playset that included a big ‘ole gun like this set seems to be based on. There are also a couple of Royal Guards, which get a nice “New” label on the box thanks to different arms and capes. It’s notable that there isn’t an Emperor for them to guard, and there isn’t an Emperor coming out in any of the sets this year, so I guess they’re guarding the gun?

I’ve always maintained that Battle Packs are hard to rate, but this year, there are three varieties to go with the two from last year, Republic Troopers vs. Sith Troopers and Clone Troopers vs. Droidekas, giving us five battle packs currently. This one, however, is the only OT set we have to choose from, and the only OT set in the early-2014 wave that isn’t a Microfighter. The summer sets are packed with OT stuff, so the dark days are almost over, but will this set tide everyone over with these four figures, a couple of new blasters, and the 100 pieces?

Lego has been guilty of “A New Hat!” type releases before, but these Royal Guards have to be one of the worse abuses of their “New Figure” I’ve ever seen. I like the new capes and all, but would have much rather seen these guys in a set where they actually make some sense. This could have been a good trooper pack, with a couple of the death star guys, a stormtrooper, and an imperial officer (you know, an actual Death Star pack), but I suppose we work with what they’ll sell us. One thing of note is that both of the Death Star Gunners come with the new flick-fire blasters, and plenty of extra 1×1 studs to shoot with them. 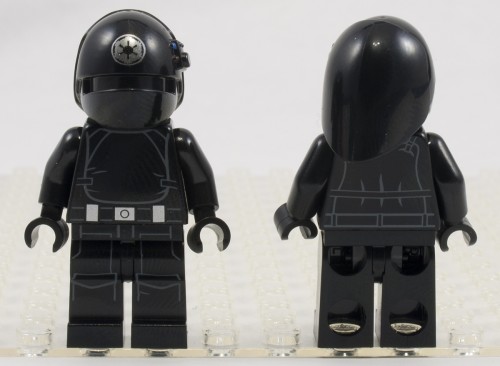 The troopers are nice (and yes, long overdue), sporting the very 70s sci-fi helmets with an Imperial logo, printed torsos, and printed legs. The printed uniforms leave mean hopeful for some updates to the Imperial troopers soon, hopefully in smaller sets, so I can stock up my Death Star even more (which is holding some 70 minifigs last time I looked). In short, I could always use more officers and troops to make it look right. That and my dream of doing a big Emperor’s Arrival MOC has not died yet, even if I never got around to getting a UCS Shuttle… 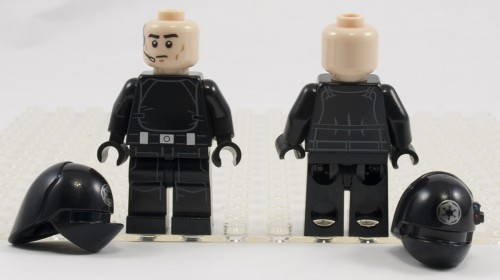 They’re actually not identical, but very similar, with one sporting an open mouth (you can’t see) and the other with a closed mouth (which you also can’t see). I neglected to take a picture of the open-mouth because I honestly didn’t even notice it until well after I put it together. Overall, he’s a good little addition, and the helmet is pretty slick, even if it’s fairly limited in its use. 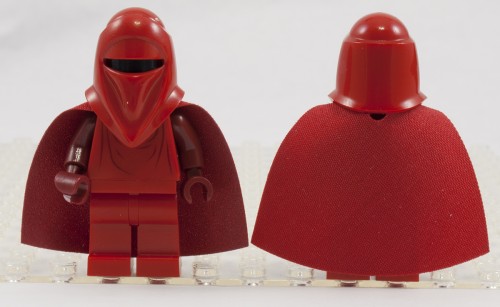 The Royal Guards, like I said, are just a slight upgrade. The biggest change is the cloak, which is using the two-color printing that showed up late last year. It’s dark red on the inside and red out the outside. I’d like to say I remembered what the cloak really looked like on the old action figure, as the Royal Guard is one of the few Star Wars figs I had as a kid, but as I remember, the most defining feature of these guys was that they wore robes, not cloaks.

A different color inside and dark red arms doesn’t really make up for the fact that the cloak just isn’t accurate to the look. Lego has experimented with cloth robes before, and I was hopeful that the CMF graduate or the like were going to give us proper fabric robes eventually. That being said, the big issue with these guys is that you really don’t need all that many of them in your collection, certainly not at the level that battle packs would leave you. 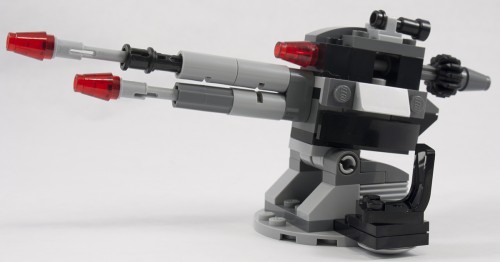 The non-figure part of the battle pack is a gun emplacement. It doesn’t really show in the pictures, but this is just a thoroughly underwhelming build, even for a battle pack. The piece count is inflated by a lot of technic pins and parts, and you get a couple of little 2×1 curved slopes and the hinges on a 2×1 plate, but there’s something about emptying the bags in this set that leaves you underwhelmed. 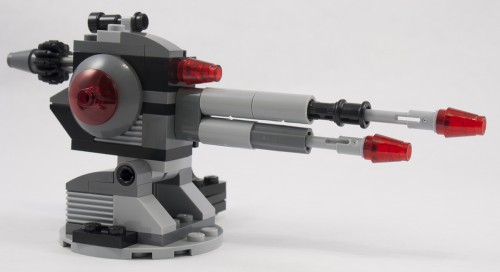 As a gun, I suppose it’s okay. The issue is that there’s really no place for it to go in a display that I can come up with. It’s smaller than the existing gun on the Death Star playset, though it does look better than that one does. It also too small for the platform. That and the gunners were more for the Death Star’s main laser more than anything. You could fit it into a big custom build, if you liked, but I think that if you’re going to invest in something like that, you’re going to build your own guns.

That’s the real issue with this set… while the gunners are cool, they’re not really enough to justify the set by itself. The Guards are good on the first one you buy, but I’m not sure how many you need in bulk.Â While the Royal Guards aren’t bad, they’re not a good fit for this pack. I would have rather seen an Imperial Officer and a Stormtrooper in their place, which would have moved this thing into a much more amazing pack. The parts don’t really justify the mix either, since it just feels disappointing when you empty the parts out to build.

Verdict: 2 out of 5. I’d rate it much higher with a better figure mix, but as it sits, it just doesn’t feel like a set you’d want to buy a lot of. And that’s the whole point of a battle pack.

You can order 75034 Death Star Troopers on Amazon.com right now! This, and the rest of the early-2014 Star Wars sets, are scheduled for release on March 1st. 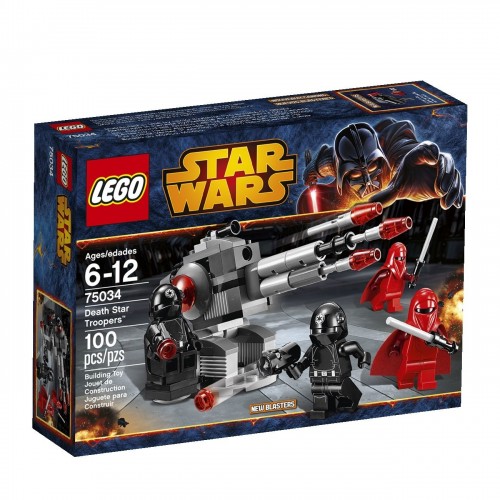