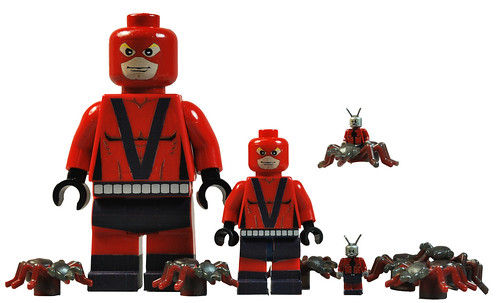 After my even handed address about the need for LEGO maxifigures the other day comes along two examples of opportunities for TLG to step up. Firstly, Jared “Kaminoan” Burks AKA The Fine Clonier brings his creative flair to the infamous Hank Pym and creates Giant Man and Ant Man in three different scales. Utilizing official LEGO products he’s managed to prove a great point about the ease of simply increasing the size of the standard minifig shape to better create a sense of scale. The only thing missing is a large scale 20″ Giant Man which would put him in near perfect comic book proportions with a minifigure. He says it was the look of the new Hulk figure that got the ball rolling and I’d have to agree that the Giant Man he created would be a great scale for old jade jaws.

But could they do the Hulk justice with an upsizing and a print job?

It appears customizer CHRISTO‘s got that part covered. Excelsior.