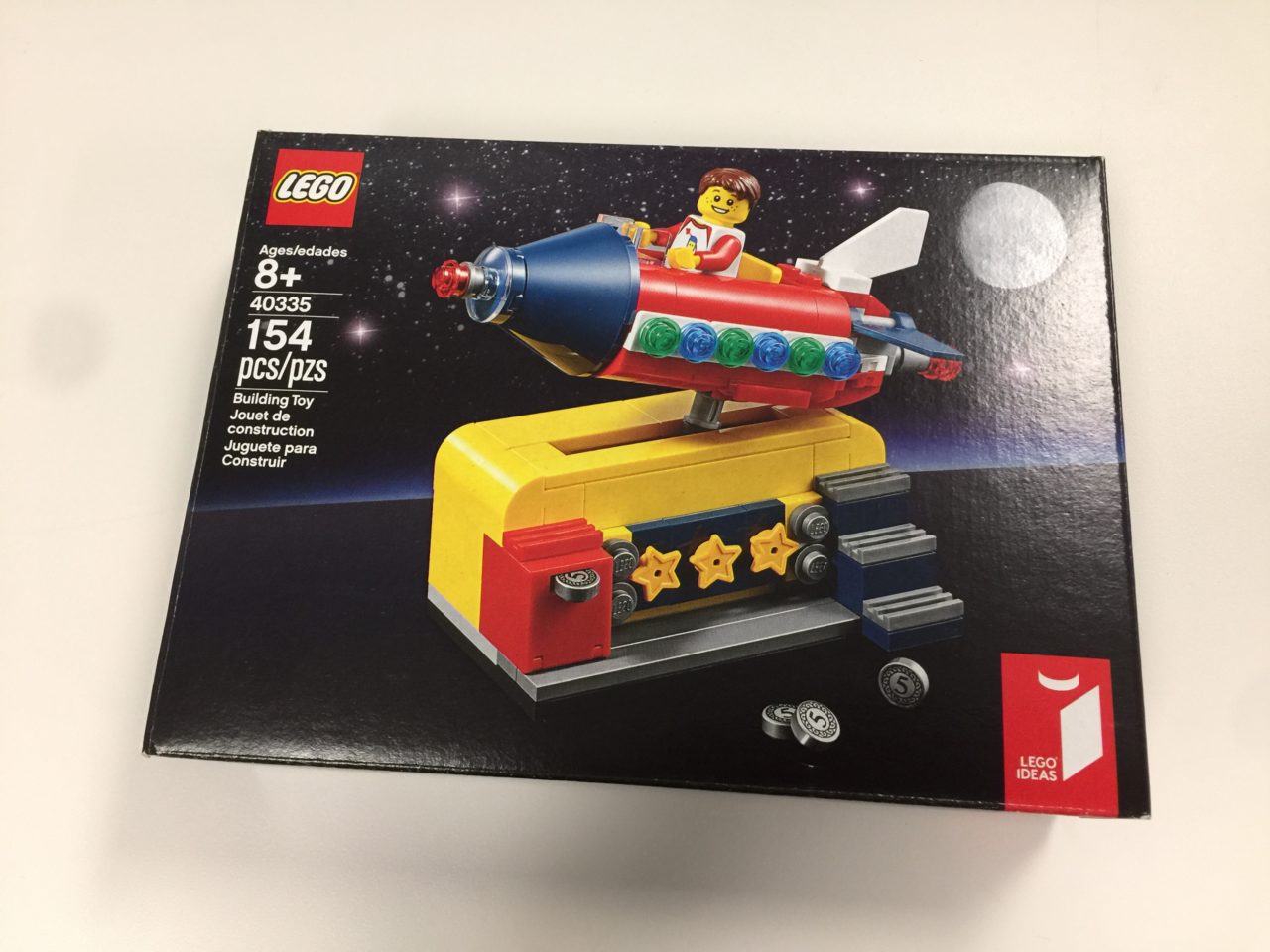 The fan-created GWP set, 40335 Space Rocket Ride, is now available from LEGO Shop@Home and Brand Retail locations with a $99 purchase or more. Obviously, a no-brainer set to get would be the newly announced 10266 NASA Apollo 11 Lunar Lander set which retails for $99.99. This promotion lasts until 11:59pm EST June 18th, 2019 or while supplies last. 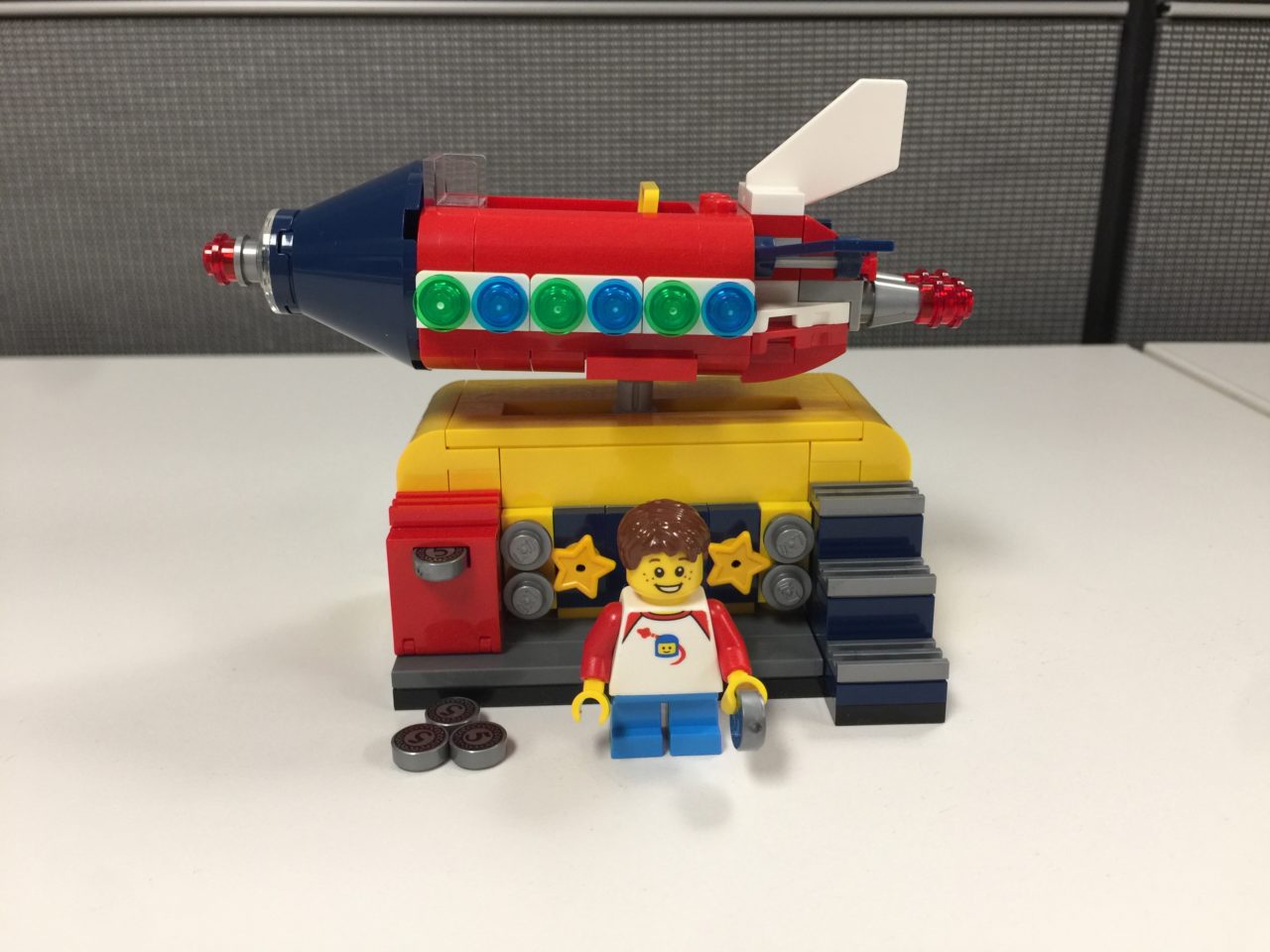 This isn’t going to be much of a review since there isn’t a whole lot to review. I got my sample pack last week and set out to build it. And it’s…. Ii’s just fine for what it is. If anything the actual ride looks way too big. These rides that typically appear past the checkout lanes or near the exit at grocery stores are pretty tiny. So having the model be twice the size of the kid minifig is a bit amusing. But if it was intentional to show it from a kids perspective, that these kinds of rides were larger than life when you were little, then mission accomplished. 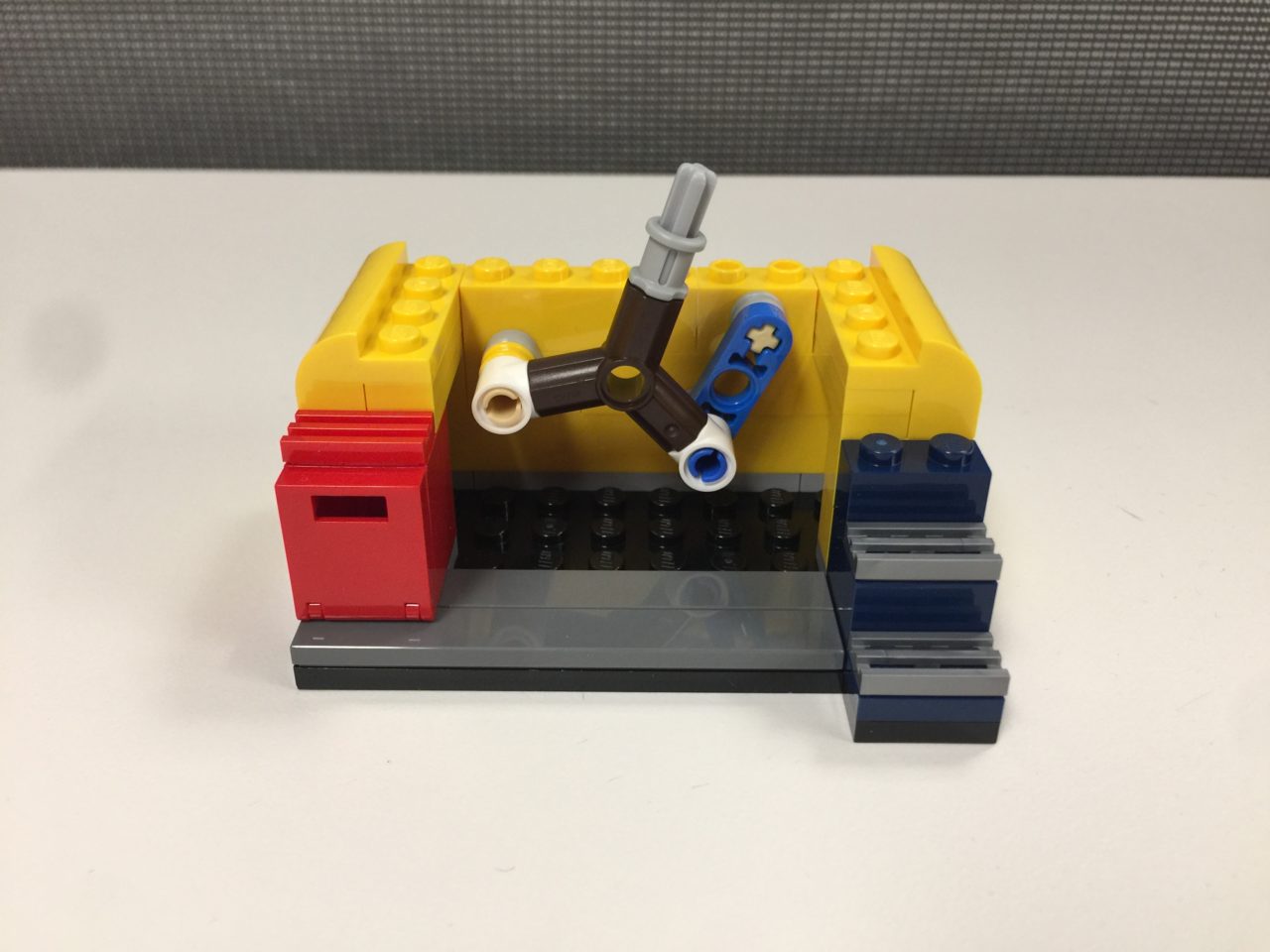 The one thing I wanted to check out the most was the mechanism to make the rocket bob up and down. And here it is.

There. Now it’s not completely necessary to buy one if you just wanted to make one from your own parts library. 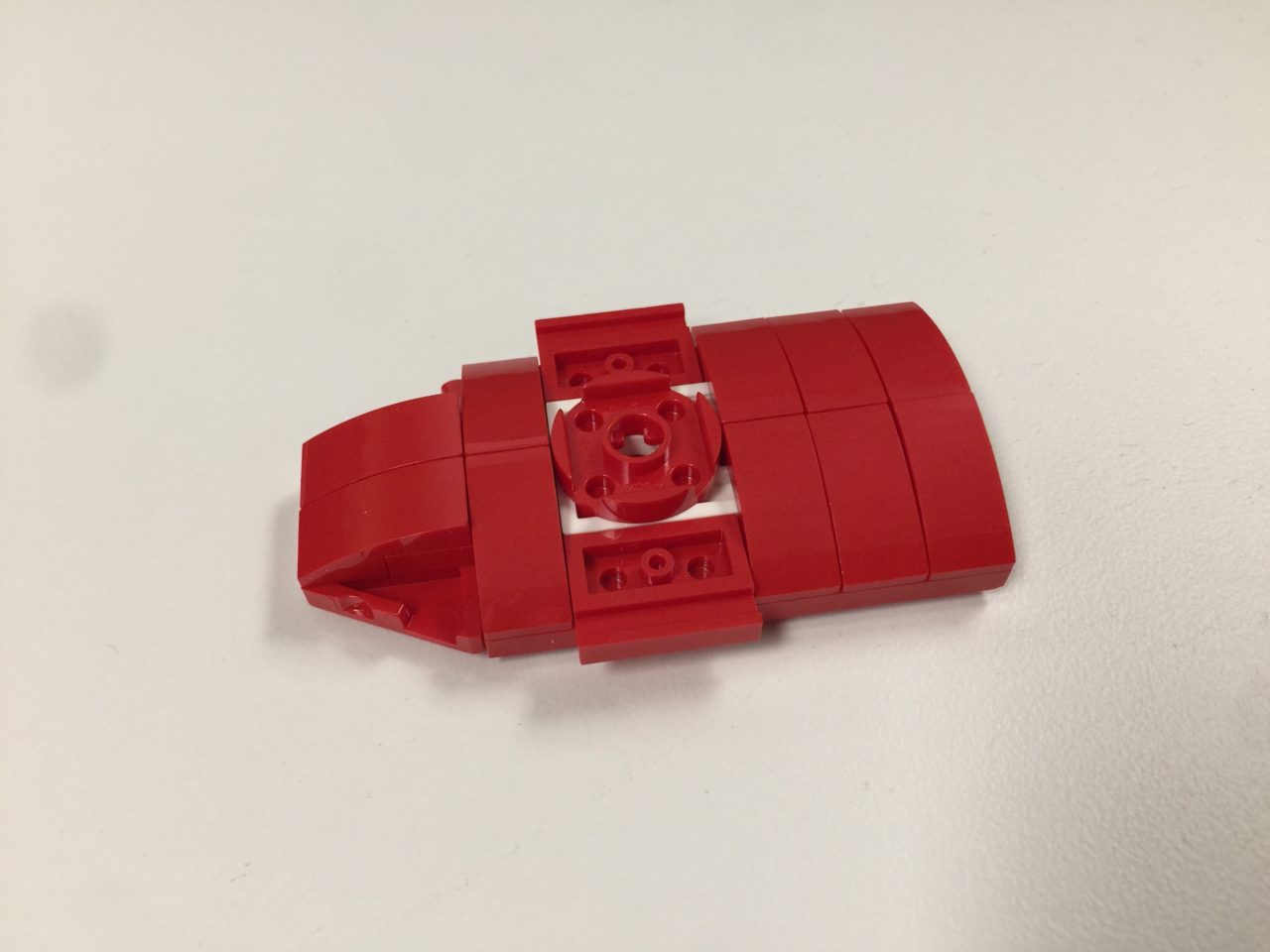 Attaching the rocket to the mechanism is simple by using a technic 2×4 plate and a 2×2 round plate stacked on top of each other on the bottom of the rocket. Then the axle attaches goes through the hole you just made. 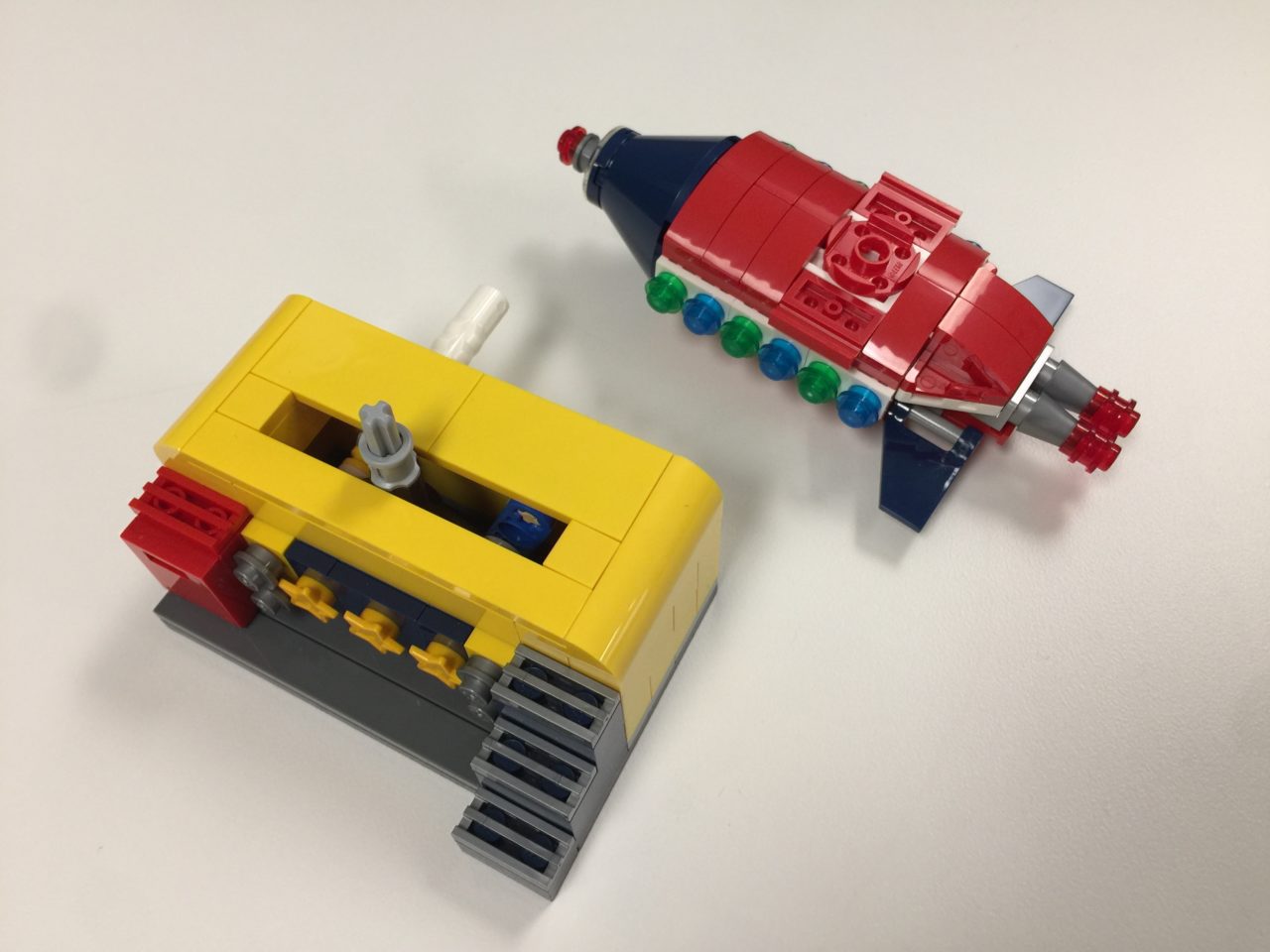 I can imagine someone wanting to augment the Theme Park subtheme LEGO has going with a couple of these things. And, you know, because Star Wars exists, I’d love to see a bunch of Star Wars rides built like this. It would be pretty darn easy to take a Micro Fighter and just slap it on top after a few modifications. 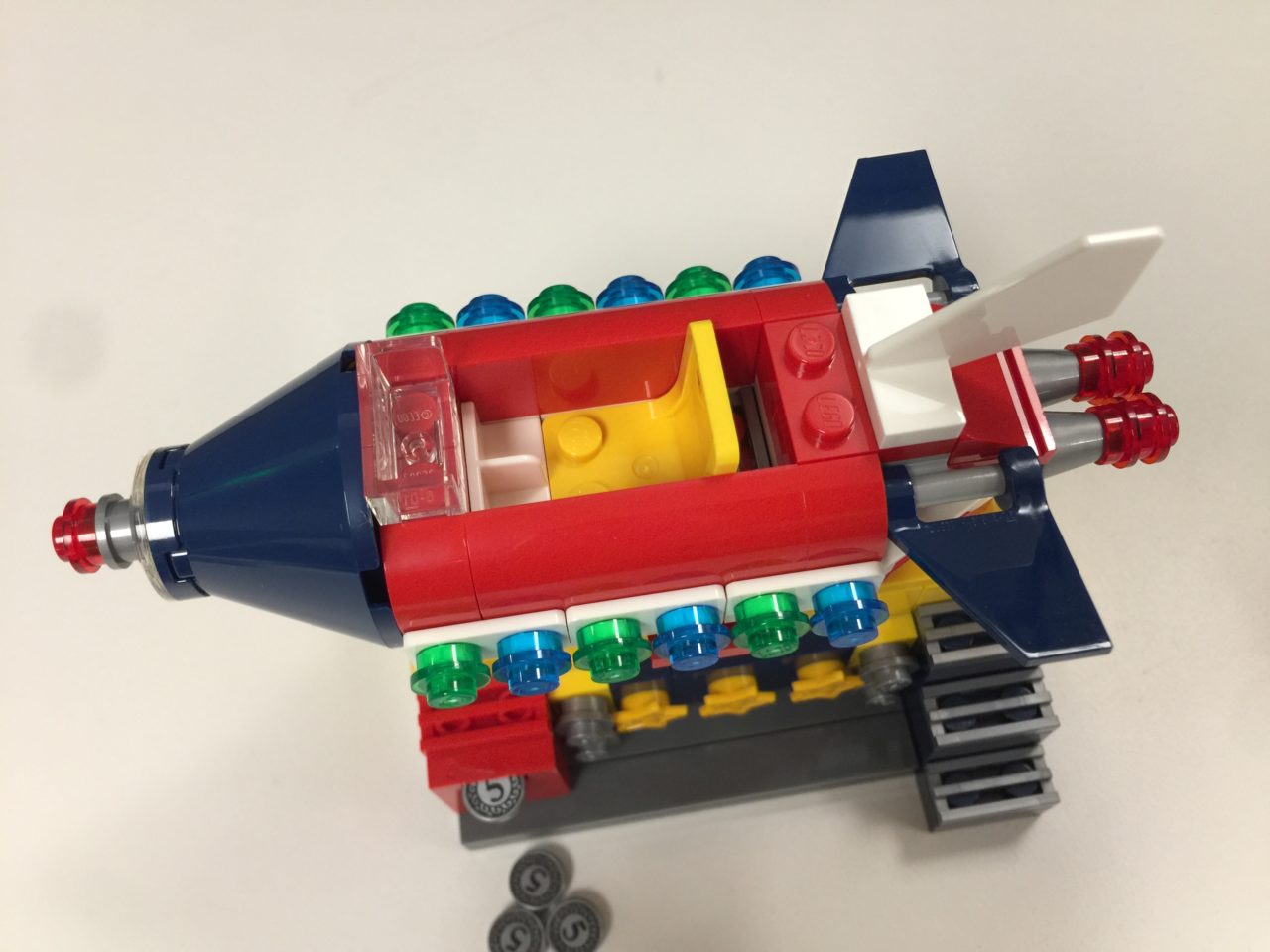 The ride comes with a kid minifigure, but with standard short legs, not the bendable kind. The rocket does allow seating for a regular-legged minifig. It’s also minidoll compatible… kinda. And I stress “kinda”. The studs from the chair prevent the minidoll’s legs from lying flush against the seat. And any minidoll with long hair won’t fit at all because the chair back will hit the hair piece. The torso on the minifig is probably the best thing out of the set honestly.

The point of entry to get a Space Rocket Ride is pretty high at $99. If the Lunar Lander set hadn’t just come out, I wouldn’t bother trying to fill my cart to meet the high threshold as I would with some other promos. This one just doesn’t move the needle much for me. But with the promo lasting until 11:59EDT June 18th, 2019, getting the Lunar Lander set it makes it easy and painless to get a Space Rocket Ride as well. Otherwise, it’s an easy pass.

And for the record, LEGO DID provide me a copy of the set for review. Thank you, LEGO Shop@Home.