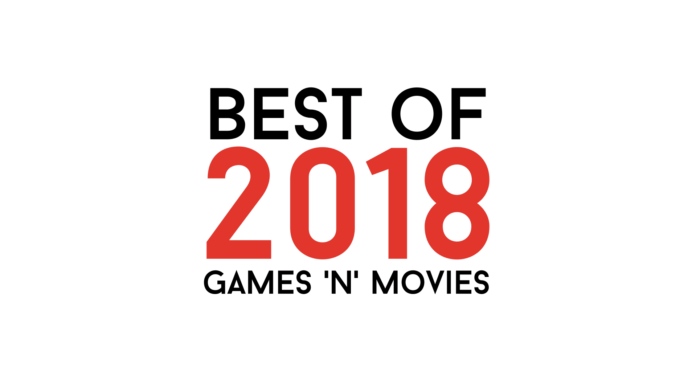 Hey, Iâ€™m Eric. 2018’s been a hell of a year. I won’t bore you with the details of adult life that, being the young boy I am, have finally caught up to me. To make a long story short, the days of playing Minecraft for 8 hours a day are long behind me, and I’m not 100% sure how I feel about that. Bittersweet, I suppose.

Entertainment, as a whole, has slowed down in my life. Full-time student and part-time jobs kinda do that, as well as running a bunch of side projects. I have a list of 321 movies to watch that just keeps getting longer. I have a list of TV shows that I haven’t even started on, because if I don’t have time to watch movies, how the hell can I watch 60 hours of a TV show?

Legos, as well, are just…blip. I moved this year and brought my entire collection with me. It has barely been touched.

As depressing a setup as that is, below are the games and movies that I’ve had an absolute blast playing and watching. They’re all highly recommended.

Before I get into it, only one of these games actually came out in 2018. These are just games that I’ve enjoyed throughout the year.

Metal Gear Solid V: The Phantom Pain is one of my favorite games. Instead of the linear â€œdo exactly this to complete the missionâ€ that a lot of games use, MGSV instead gives you a playground, says â€œthis is your missionâ€, and itâ€™s completely up to you to succeed in whatever way you like. As good as MGSV is (and believe me, itâ€™s good), Hitman 2016 surpasses it in every way.

There are 8 or so levels. You can play them in pretty much any order you want, and, best of all, any way you want. For instance, in the first actual level beyond the tutorial stages (which are just as detailed and deep as the regular levels), you have two targets. You can kill them in any way. Itâ€™s good if you donâ€™t kill anyone else. Itâ€™s better if their bodies are never seen. This leads to a dangerous stealth game of trying to draw the target to a secluded room or area where you can assassinate and dispose of the body quickly. This can take hours. The tension is unbelievable. You really feel out of your element. It feels like youâ€™re one step away from failure.

Hitman gets better the more you do missions because you get better. And you want to. My first playthrough of that level took me about 2 hours. Now I can kill the two targets in about 3 minutes. You feel professional and like a proper assassin, which, as cliche as the â€œthis game makes you feel like _____â€ saying is, itâ€™s a completely earned feeling. Currently, Iâ€™ve only explored about 4 levels, and I only feel good on two of them. I can hop in a mission for a few hours and mess around; thereâ€™s no long, complicated story to keep up with.

Of course, there are a few negatives. The AI is pretty good, but you can trick it fairly well. For instance, on some buildings there are pipes you can climb up, and even if youâ€™re next to a guard, he doesnâ€™t really seem to mind unless youâ€™re actually standing on his level and trespassing. Itâ€™s not game ruining stuff, but it does add a few potholes in an otherwise smooth drive.

Everyone knows Overwatch by this point, right? So Iâ€™ll be brief.

Itâ€™s top. Itâ€™s so good. Guys, seriously, go play it. Itâ€™s polished, itâ€™s fun. Can you teammates drag you down into a pit of despair? Sure. But for every low there is a high of just playing the game. I came from Team Fortress 2, which is a somewhat similar game, and I put my ~400 hours into it. But TF2 doesnâ€™t hold a candle to Overwatch.

There are, of course, the negatives that come with any online game. Horrible toxic people being the most prevalent. But that’s okay. Because at the end of the day I can completely ignore them and just enjoy playing.

Wow, the only game on my list that actually came out this year.

Anyway, itâ€™s great. I canâ€™t say I was a big Smash fan before Ultimateâ€™s release. Marth was kinda fun to play as, but beyond that it was just…eh. I bought the 3DS Smash Bros in 2014, which also didnâ€™t help my opinion of the series.

But as Iâ€™ve played Ultimate pretty much non-stop since I bought it two weeks ago, I honestly love it. Itâ€™s fluid, itâ€™s fast, it makes you feel like an absolute badass. I love all of the little touches that make the game so much better: having the characters unlock one by one so you donâ€™t get overwhelmed; the new wavedash button; the camera zoom when you DESTROY your opponent; the fact that I can have Escape from the City playing on the FD Sonic stage over and over as revenge for my friend beating me. Itâ€™s great.

How they managed to balance a game with 70+ characters baffles my mind.

I’ve been doing the video game thing for the past 10 years or so, but film is different. This is my area. I wasted my time and my parents’ money on film school, for crying out loud. Luckily I escaped without the ego of film students, but it did give me an appreciation for lesser movies with lower budgets. Such as…

Upgrade is weird, but in the best way. Itâ€™s like an episode of Black Mirror, but with a much larger budget. This movie has the best acting of the year. Best cinematography of the year. Maybe even best story of the year. Check out this scene. If you want more of this, go watch it. God, itâ€™s so fun.

The weird part is how good some of these smaller Sci-Fi movies are. Not to knock Star Wars or Marvel too much, but they just donâ€™t have the gravity and dark tone that these Sci-Fi movies do. Annihilation was super creepy and beautiful. A Quiet Place, while maybe not too small, was sublime and horrifying. Kin, while it didnâ€™t realize its full potential, was still a fairly entertaining. By and large, these smaller, less popular Sci-fi movies turn out to be far more fun than your run of the mill boring drama that has no point. I saw so many of those.

Mollyâ€™s Game was my first introduction to Aaron Sorkin, the man behind movies like Steve Jobs, The Social Network, and the honestly incredible TV show The West Wing. This movie follows Molly Bloom, a woman whose existence I was unconscious of before seeing this movie. What follow is a fast-paced romp through all these gambling rings full of billionaires, beautiful dresses, and incredible dialogue. The movie does run a bit long at about two and a half hours, but itâ€™s worth seeing through at least once just for the pure spectacle. It tells an incredible experience and Jessica Chastain nails the Sorkin dialogue (yes, thatâ€™s a specific type of dialogue).

Iâ€™ve been on this MCU train since Iron Man in 2008, so seeing all of this stuff – Guardians, Strange, Avengers – in one movie was like seeing the Avengers back in 2012 all over again. I went to see this movie at 10am on the Friday it came out, expecting no one else to go. Apparently everyone else in the theatre expected that, because it was packed. Never seen anything like it.

After the disappointment that I felt Black Panther was (I’m sorry, Nick), it was great to see a return to form. The superhero fatigue was vanished in a wonderful new breath of air and a darker tone. My favorite thing about the movie is how every character – even the most minor ones like Heimdall and Pepper Potts – have a little cool moment in the movie. Nothing goes to waste here, and it’s wonderful.

Iâ€™m sure if you read FBTB youâ€™ve seen Infinity War at least once – our content generally skews to comic book fans – so I wonâ€™t waste your time with rehashing why this movie is so good for any longer. We all know how good it is. Itâ€™s so good.

So yeah, that’s all I’ve got. I highly highly recommend all of this media, as much weight as that carries. Hopefully some of you will check out this stuff. Let me know how you like it, or let me know if my opinions are incredibly invalid and I sound like a child. Either or.