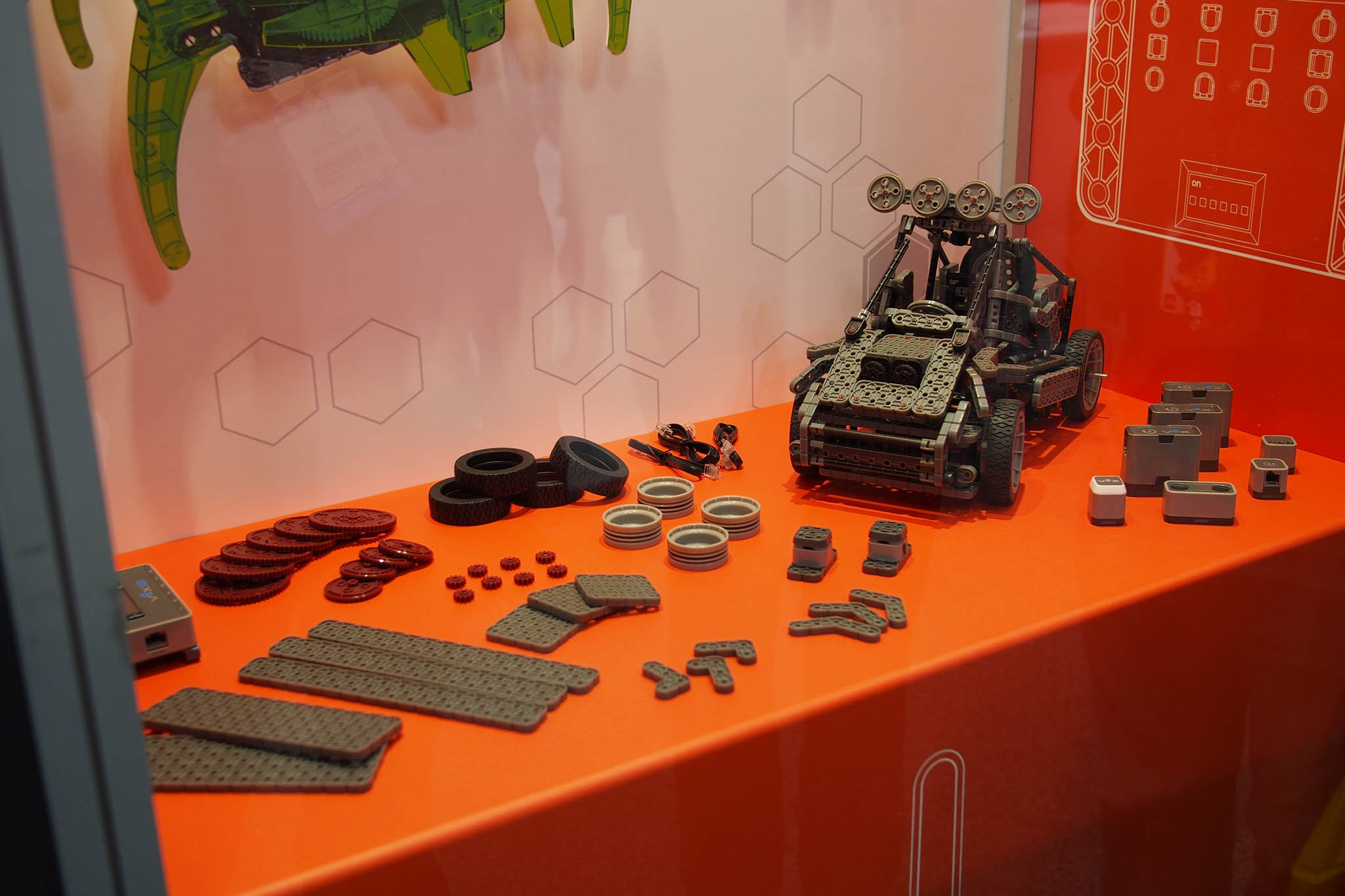 Our coverage of the LEGO releases at Toy Fair wrapped up on Sunday night, and you can view galleries for the new TMNT, The LEGO Movie, Star Wars, X-Men, and Ghostbusters sets that were on display by clicking each of those links. Unfortunately photography was prohibited for the Ninja Turtle movie and Guardians of the Galaxy sets, so that is the extent of the licensed theme news. With limited time and the surprise twist to only allow one reporter per site in the booth this Toy Fair we won’t don’t have galleries for unlicensed themes like we have in prior years. But with the lighter load we decided to walk the floor after the LEGO pre-show and check out what the competition has to offer as well.

Lego utterly dominates the plastic brick market. There’s no doubt about that. So with that in mind, what can other companies do to carve out their own slice of that pie? Licenses are the most direct route. Get a toy line going and grab some popular IP that kids can’t get enough of and go nuts. Everyone knows that trick. It’s the “easy” way, I say while casually brushing aside the complexity of starting a toy company and wooing a license-holder into an exclusive rights agreement. But there is another way, one that takes more creativity and effort than cloning bricks with a new logo. The inception for this post occurred on Saturday afternoon as we browsed the latest Kre-o selection in the Hasbro showroom. Ace got the full pitch and took some shots of what they’re up to, so I’ll let him share his thoughts on that after I run through some of the other companies we talked to.

Before I start, I have a quick note on Mega Bloks since they seem to be the biggest brick maker after LEGO. Unfortunately we weren’t able to get a look at any of their products. They decided to go with a sealed booth approach to Toy Fair this year and won’t let you in without an appointment, notably similar to LEGO’s setup except without the pre-show to let fan sites get a look at the new items or even window displays or posters to advertise their product. Or it’s possible they had a similar pre-show and were weren’t invited. It seems excessively clandestine, but I guess they really don’t want some other company like LEGO sneaking in and copying their ideas. They did recently announce a new SpongeBob line for this fall, so if you had hopes for future LEGO SpongeBob sets you may be out of luck.
First up is a look at VEX Robotics. They’ve been around for a few years making robotics kits and have educational programs in place helping teach robot design at varying levels of complexity, kind of similar to the programs Lego has and leaning to he higher end of the spectrum. Their new product geared towards younger users that put them on our radar is VEX IQ.
It isn’t strictly Lego related, but it looks like an updated plastic take on Meccano using Technic pin-like connections rather than nuts and bolts. It will basically be going head to head with Lego’s Mindstorms kits when they come out later this year. VEX got into the toy market with their Hex bugs a few years ago and for some starter kits in the IQ line they’ll be making scaled up versions of their popular crawler designs, as well as a Strandbeest and a more in depth starter kit to build original remote controlled or fully programmable robots. 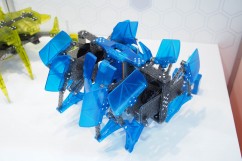 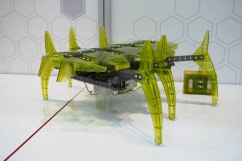 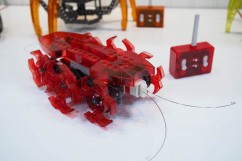 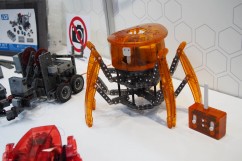 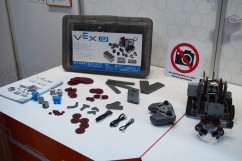 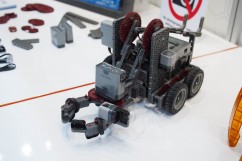 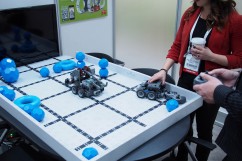 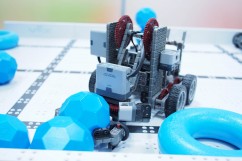 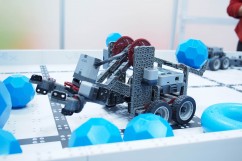 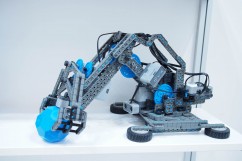 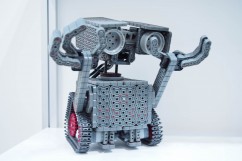 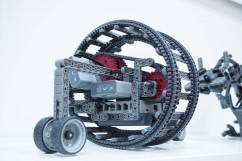 The last few robots show off the kind of variety an potential in the system, and offering cheaper remote control kits is a good way to hook someone who might be looking for a more affordable alternative to Technic sets with Power Functions and the $350 Mindstorms kit.
On the less advanced but equally tangential side, Zoob is a construction toy suited for more organic creations with it’s knobbly ball and socket system. They’re stepping into Lego territory by developing adapter pieces to integrate the two very different systems. They only had some rough prototypes on hand but have planned connectors for each of their connection elements and they will be integrating a rotating joint into some to help make dynamic models easier to build. 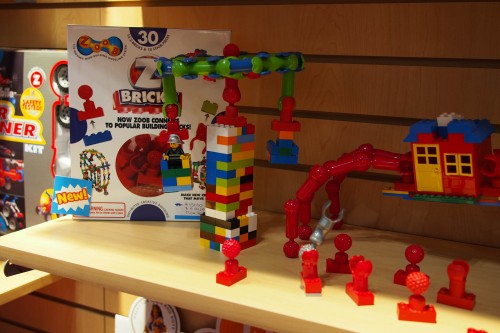 I’m pretty sure I’ve seen either a Kickstarter project or at the very least some Shapeways models with the same basic idea, adapters to connect a myriad of building systems together including Zoob and Lego bricks, so the demand for this is clearly out there. Their starter pack coming out in a few months with the adapters and normal Zoob connectors will only run you $10. I see a lot of potential here for massive Rube-Goldberg machines combining complex modules made from LEGO and with huge structures made from Zoob.
Moving a bit further towards brick territory, we got a sample MLB themed kit from Laser Pegs to check out. 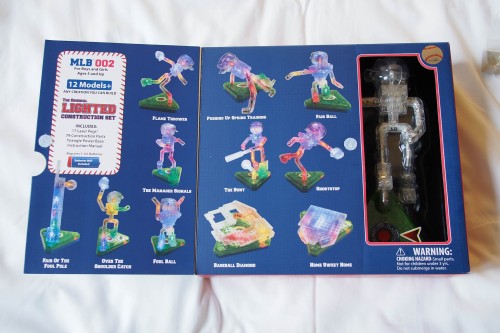 This is a building system featuring all transparent elements and some special parts with embedded LEDs. You can build off the studded ones with any LEGO compatible system, string together the light up parts by connecting them with the special pegs on the ends to transmit power throughout, and hook that into a base to power up the lights. I recognized these from end-cap displays at Target at Christmas and clearance aisles shortly after… so the recognition is there but the popularity hasn’t taken off yet. This particular kit is more about the stick figure baseball player than the LEGO-like construction angle, but it did come with a pile of bricks and plates to play with. 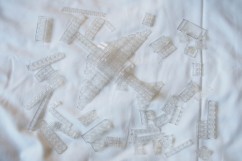 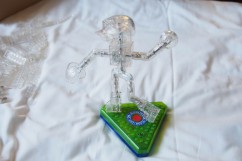 Not too much variety in the parts available so I didn’t put a lot of effort into Wonder Woman’s jet, but the main thing I was judging was clutch power. It’s the problem that plagues every brick maker. I was shown the different generations of parts they’ve gone through as they refined the product, the older parts were cloudy and loose, the newest batches definitely look clearer and the ones I tried seemed pretty tight. So no big complaint there. The other tube-like parts only connect via the pegs and sockets, so assembling is straight forward but making something is still a little tricky. The baseball player for example is pretty awkward. All connections are ridged but they do swivel around the peg, so don’t expect to get any action figure like articulation. Pick one of the poses suggested on the box and hit the lights. 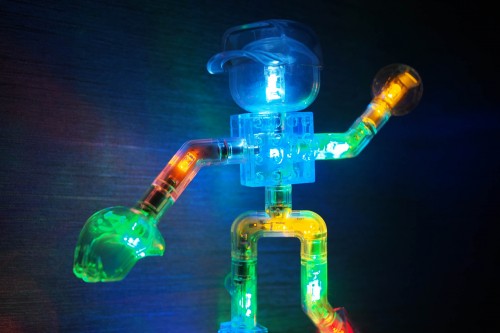 So it looks kind of neat- what kid doesn’t love bright glowy things? But the problem I see is it’s too focused on the gimmick. It comes off as a novelty item and not something you’d really buy more than once. I would be surprised if any FOLs pick any of these up, even though I can see some potential there to brighten up a MOC. But there are other alternatives that are easier to integrate if you’re willing to break the purist code so even then Laser Pegs probably won’t be high on your list.
This last item is something that kind of stopped us in our tracks. What caught our attention as we walked through the booths was this wall banner showing a 2×4 brick turning into a robot looking minifigure with glowing eyes. 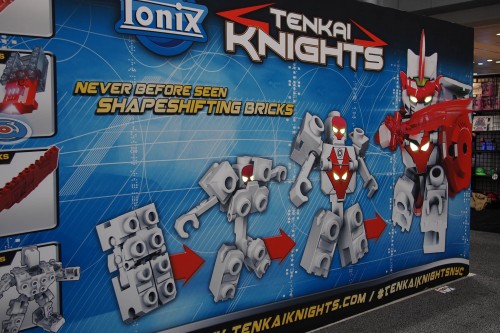 The eyes don’t glow, but everything else checks out. It comes in figure form in the package (because that looks more interesting than a brick obviously), but flip a chest flap up, twist the legs around, fold the arms into the remaining cavities, and the result is the same size and is just as compatible as any other competitor’s 2×4 brick. They’re called Tenkai Knights and they’re from Ionix, a new company I haven’t heard of before. They have a show on Cartoon Network featuring these so it’s already in full swing. We got one these figures to review and it’s actually pretty fun. 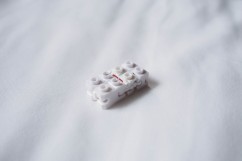 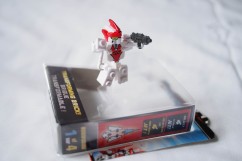 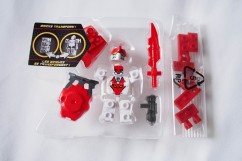 Now, the torso section seems a little out of tolerance, because when I tried sandwiching it between two Lego plates it automatically separated on top and bottom by a tiny bit. No amount of pressure or tweaking would keep the plates flush.It might matter if you tried building a wall out of them, but who’s going to do that with a transformable brick? There’s a somewhat bulky cape element with studs that seem to be facing the wrong way, but the solution for that is a sweat little plate with studs on both sides. You get another one of those to clip a tiny U-shaped handle to the back of the shield. For weapons you get sword and translucent blaster. There’s also a helmet to cover the kind of goofy looking head and a couple of spare hinge plates (if you buy three of their other figures they can combine into a jet so I think it uses those spare parts). The hinges are pretty much duplicates of their Lego counterparts; clips are cross compatible of course, the only noticeable difference being the logos and the different plastic used. They’re out in toy stores already and you can get this one here on Amazon for about $10. 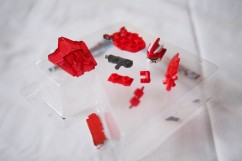 The complaints I have are mostly color consistency, articulation, and of course clutch power (beyond what I mentioned above). If you look at the transformed brick under decent lighting you can see straight out of the packaging that the whites aren’t all white, which seemed odd. But that doesn’t really show up in photos and I doubt a kid would care, so take that as you will. The arms have two joints in them, but they’re both tucked into the shoulder area so the twiggy little arms feel a little awkward posing around. Still better range of motion than a Lego minifig though. The head looks like its on a peg and should twist, but that doesn’t seem to be the case. Either it’s deceptively molded or mine is stuck. Kind of related, the helmet isn’t compatible with standard Lego minifig heads, which is a shame but sort of expected since the head is blockier. The cape, even with the slick adapter plate that FOLs have begged Lego to make, just doesn’t want to stay attached to the back of the figure. I think this might be the torso’s fault though. The shield handle has some cuts in the grip to make it look more detailed, but the downside is it pops out of the hand clip with the slightest pressure so it’s real finicky to pose. There’s definitely room for improvement before I would call these great, but even with those issues I really think it’s good. 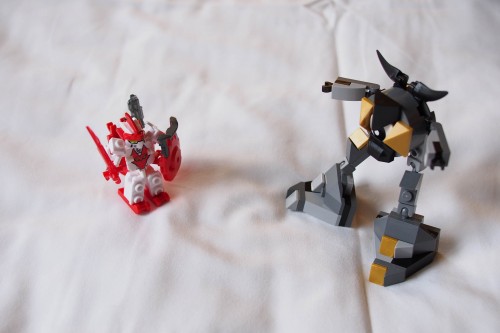 I would recommend giving these a shot if you like Transformers, especially considering how terrible the “transforming” Kreons are. Admittedly, the value isn’t the greatest. This single figure pack with only 11 pieces clocks in at about 91 cents per part… but given that one of those parts is a cleverly engineered tiny articulated action figure comprised of eight separate parts, I’m willing to be a little generous. You can get a three-pack of them for $15 which is a better deal, and there are other sets withe bigger transforming blocks at better price points as well. Even some weapon bricks that transform. Out of all the off-brand minifigure alternatives to pop up I think this is the first one I legitimately like.