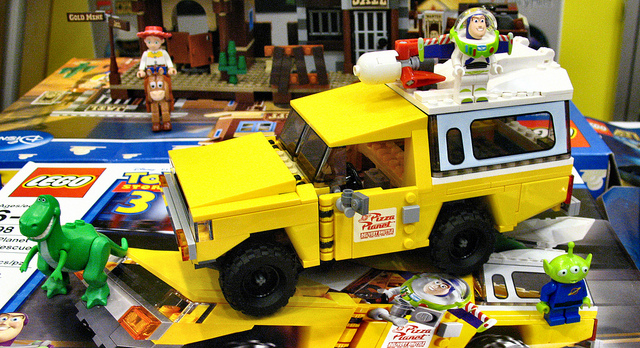 As you may or may not know, Bricks by the Bay (northern California’s first LEGO convention) was held last weekend, and I was lucky enough to attend. Unfortunately I did not plan my trip well and didn’t take too many pictures, but I wanted to share with you may favorite upcoming set of this year that The LEGO Group decided to bring along and have on display for the fans: #7598 – Pizza Planet Truck Rescue.

It will be an exclusive set, which I’m assuming means it will only be available on LEGO Shop at Home and in Toys R Us, and the price point will be $40 if I overheard correctly. I apologize for not having more solid information to share… I was busy playing with it. That does seem a bit high for a set with only 225 parts, but it has a lot of large slopes and windscreens, plus four of the special Toy Story minifig: Hamm (not shown in my picture, but he’s part of the set), Rex, Buzz, and one LGM.Â  The hood, doors, and camper shell roof all open and you can fit everyone inside. Oh, and it shoots pizzas out of the front. How cool is that?

Maybe it’s just me because my first job was delivering pizzas in an old Toyota pickup, maybe it’s because of the a commonly known running gag to include the iconic “Delivery Shuttle” as an Easter egg in every Pixar movie, or maybe it’s because this is just a really fun and well designed set… whatever the reason, I am buying this the first chance I get. I don’t remember the last official set I’ve been this excited about.

Get Duke Caboom’s Stunt Show For Half Off