The Collectible Minifig Packs were not the only no-shows at the Toy Fair Collector Event. The fall assortment of the Toy Story sets were were also notably absent as Disney called in an 11th hour Order 66 and had LEGO pull the sets from their both along with the fifth Prince of Persia set, all to avoid revealing spoilers about the movie. I can’t really blame them for doing that to be honest with you, but I honestly doubt that knowing about the LEGO sets in advance would take away one’s enjoyment of the third franchise installment. I doubt it would have the same cinematic and mind-numbing impact as SPOILER-ALERT knowing beforehand about Leonard Nimoy’s cameo appearance in Star Trek; knowing THAT would have greatly detracted from the huge OMIGOD moment when he turned around.

ComingSoon.net posted a brief overview of the Toy Story 3 toys coming out later this year to promote the movie and keep the merchandising train going. Among the images posted were two large pictures of unreleased LEGO Toy Story sets, one is 7789 Lotso’s Dump Truck (MSRP $19.99) and the other 7597 Western Train Chase (MSRP $79.99) with the first ever clear picture of Rex! Both images are rehosted below. Click on the title to go to the flickr page, the picture to view the full-sized image. No pictures of the third set, as that is probably the spoiler of the movie that Disney is trying to contain. 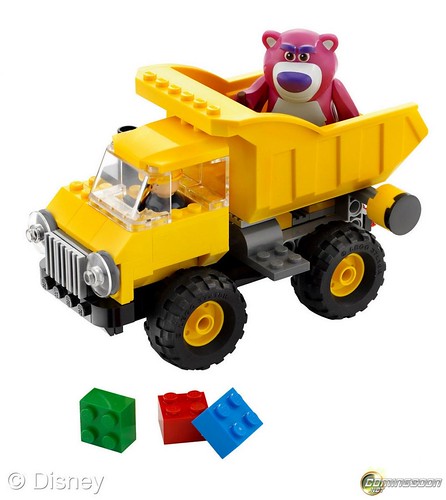 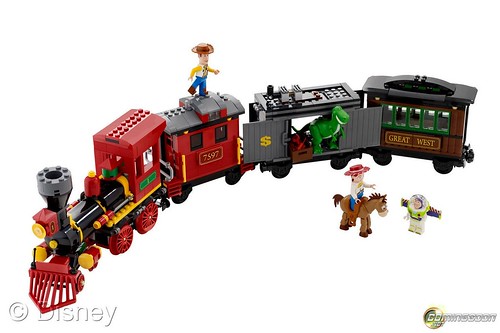 Thanks to forum member Jargon for the tip.

Get Duke Caboom’s Stunt Show For Half Off