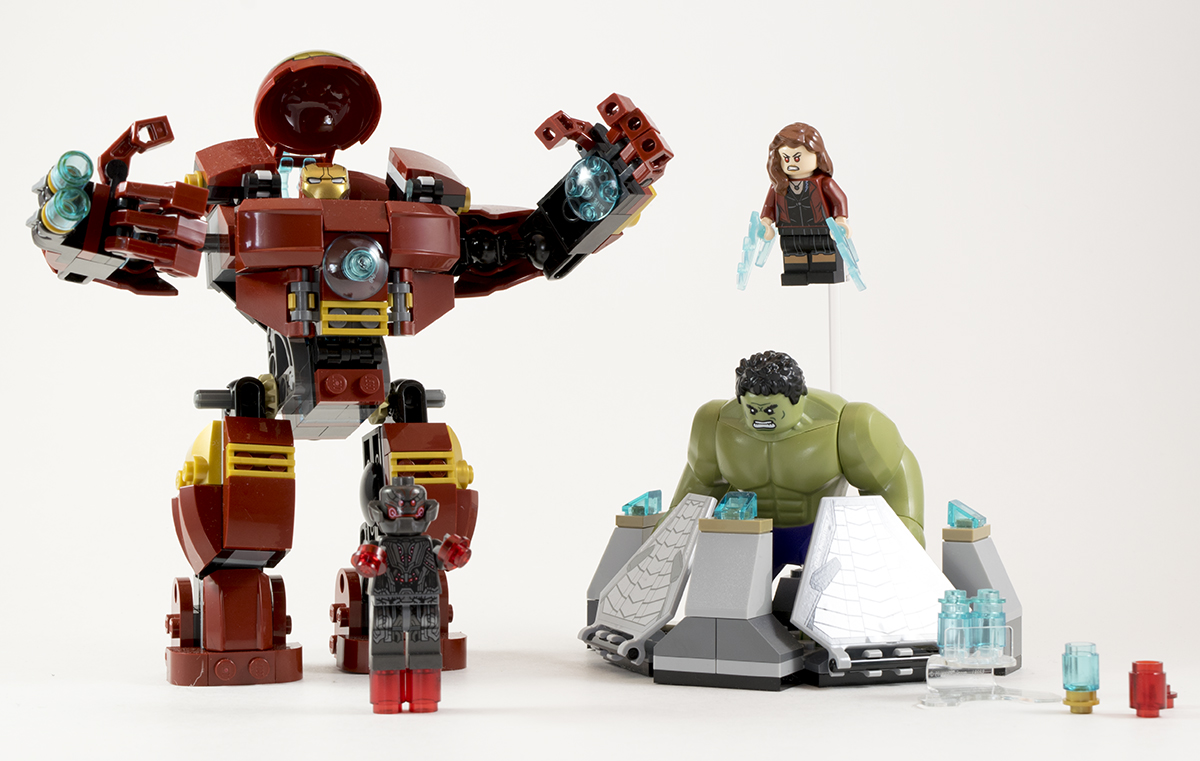 You know, the more I thought about Avengers: Age of Ultron, the more I realized it was basically the unholy merger of Wheedon’s storytelling and Michael Bay’s over-the-top spectacle. Let me be clear, I’m not calling the film Bay-ish… but one thing that Bay does well is make scenes of absurd effects and explosions that will enthrall and entertain you. Sure, you’ll feel dirty afterwords for having enjoyed it, but you will enjoy it (right up until your brain gets control back).

Reviewing 76031 The Hulk Buster Smash was a bit weird for me. I built the set and took the pictures before I saw the movie, I just hadn’t had a chance to write the review. I’ve obviously seen it since, and how I feel about the scene in general is mostly “eh.” There will be some spoilery elements to this review, even though I’m not reviewing the movie here. Of course, I’m honestly wanting to knock the set just for calling it “Hulk Buster” instead of Hulkbuster, but it’s hard to stay mad at this thing.

This is probably the most visually distinctive of the Age of Ultron sets, or at least the one that’s easiest to remember. Okay, maybe it’s easier to remember the “We are just re-releasing this thing” truck, but who thinks about the tower or that castle set most of us only even know about because it has Quicksilver? At $29.99 and 248 parts, this sits pretty squarely in the middle of the value scale these days. Not that great, but not exactly awful, especially compared to some other Superhero sets. Oh, and spoilers ahead.

I actually wasn’t that big of a fan of the Hulkbuster scene. It was visually stunning, sure, with a lot of good bang smack pow action. But, if you look at the whole narrative of the movie… you could have taken that whole thing out and it really wouldn’t have changed much about the movie. Sure, we wouldn’t have known what Veronica was (other than a reference to Archie comics), and the Avengers wouldn’t have needed to go “underground”. Well, except for the fact that they had still wrecked up a town earlier. 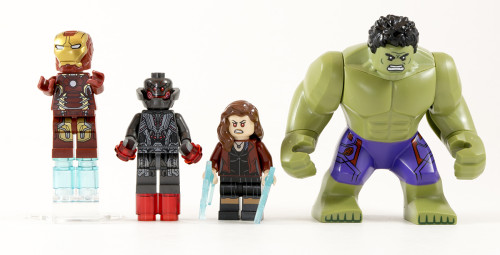 For minifigs, we get the two people who are involved in this scene, and two who really weren’t. The whole Hulkbuster scene is really between Iron Man and The Hulk. Ultron isn’t even there (or I don’t remember him being there), and the Scarlet Witch was only involved in that she sent the Anger Management problem into the city in the first place. 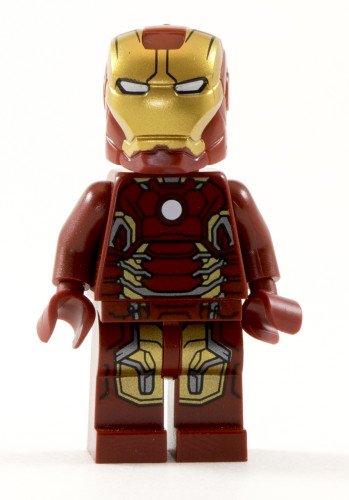 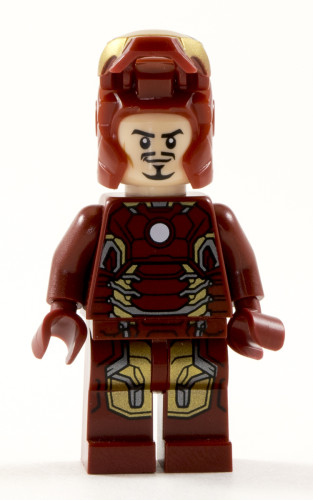 The Iron Man in this is is new for the Age of Ultron sets, but the same one that appears in a few other sets. LEGO lists it as the Mk 43 on their website, even though I don’t think it was given a name in the film. Curiously, there is a unique armor in the AoU sets, but it’s in the cheapest set, Iron Man vs. Ultron. 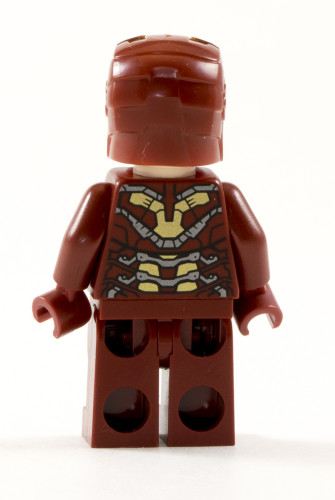 The problem with treating Iron Man as the “must be in all the sets” figure is that, unlike Batman, he doesn’t really have that much variety in the active suits in the movies. All of his figures are based on the movies, so unless we get suits that were only in the background of the armor room or seen during the House Party… we’re going to just get print variations. With the comic base for Batman, we get all sorts of wonderful nonsense. 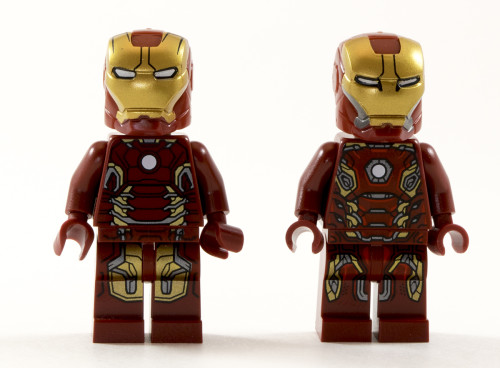 Like I said, there is a different one in the $13 set, which I’ll have a review for in the near future. I guess he did an outfit change during the movie, but I honestly wasn’t paying that close of attention to it. I like the torso and legs on the right more, but prefer the more classic helmet without the mutton chops on the right (curious, since I loved some mutton chops in the AT-DP set). However, the faceplate on the right has slightly smaller printing on the eyes, and I want my Iron Man to have that better scowl. 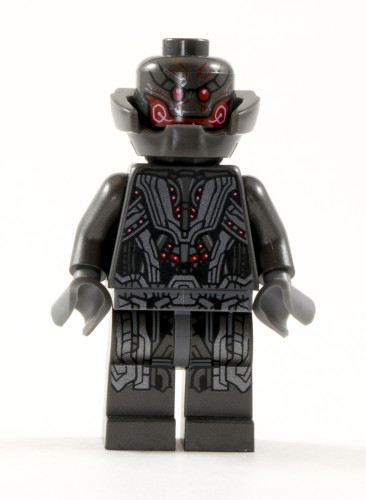 Ultron is kind of the odd inclusion in this set. I can see Scarlet Witch, even though she wasn’t in the scene itself, given that she set the whole fight off. I’m also not overly impressed with the different Ultron figures, since they aren’t overly consistent. We have the Mk1 (broken), Prime (this guy), SoldiersÂ (IM vs. Ultron set), and Ultimate (with the new hat). The helmet looks the best, this torso looks the best, and the Soldiers are certainly the most true to the character. I guess we’re all mix and match for making the proper character. 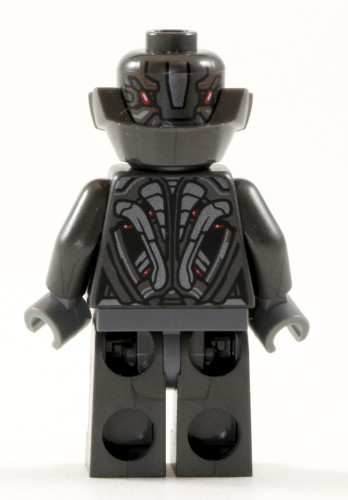 That torso and those legs have some fantastic potential though, especially if you start to layer things like the Space Marine armor or some other accessories. A nice mechanical or bodysuit armor under there, and there’s nothing about the torso or legs that make the thing “Marvel” specific. The whole neck part I’m not as sold on, but I’m sure builder’s more talented than I will come up with some crazy ideas, like using them as part of a Motor Functions blender or for wheels on a car. 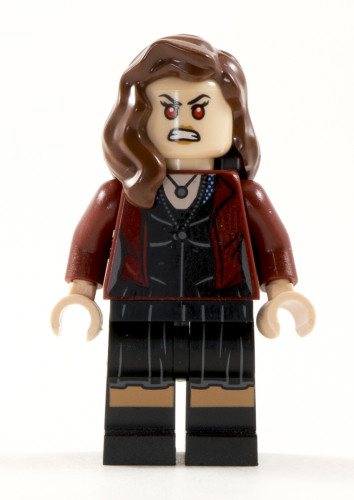 Â I’d like to think that all of my ranting has made a difference, and that’s why we got Scarlet Witch in one of the more inexpensive set… but I think it’s just a coincidence given that LEGO wasn’t willing to put Black Widow on the motorcycle she used to rescue Captain America (putting him on the bike instead). Of course, that’s better than Hasbro not even including her in the action-figure version of the Quinjet… but none of that really factors in to Scarlet Witch (who I’m not sure exists in action figure form). 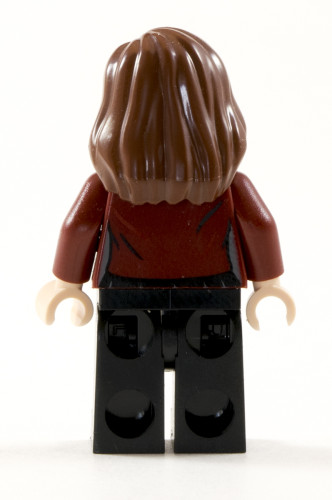 She’s okayÂ as a figure, though the hair feels a bit lazy (it should be dark brown and go over both shoulders). The costume printing is good, but the biggest issue really isn’t on the minifig, it’s that she has blue blades that represent her power instead of red.Â Visual representations of her powers in the movie were red, and they’re typically red or pink in the comics as well. 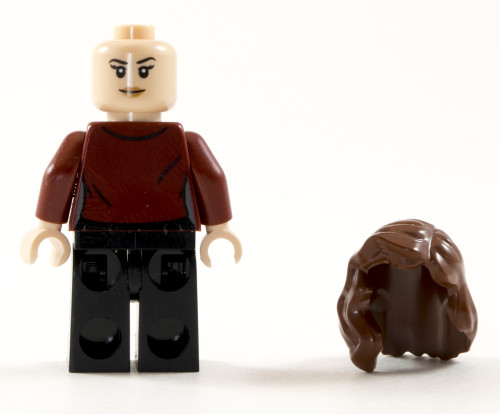 I’ve never been a big fan of the printed “flesh” on the legs, since they’re typically only on the front, or at best, the front and sides (like in the CMF cheerleaders, the Simpsons figures). Speaking of the CMF line, LEGO actually had a solution for her outfit already in the form of the spooky girl minifigure that had stockings and a skirt. The color of the print, where it is, works, since she was wearing stockings in the movie. 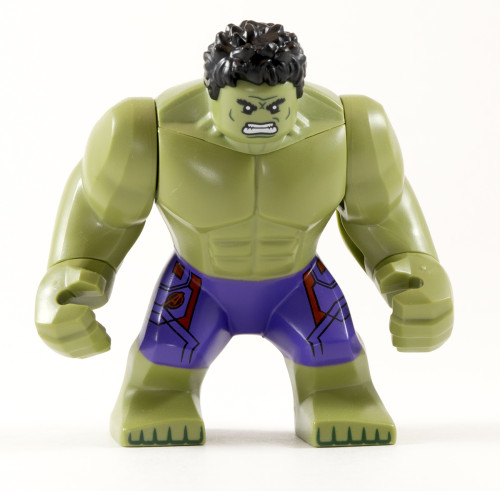 The Hulk Bigfig is actually a very nice addition, since we finally get a Hulk in a more movie-appropriate color instead of the bright green from the comics. It totally made sense in the MODOK set, since that was the cartoon, but was kind of weird in the Helicarrier Breakout set. 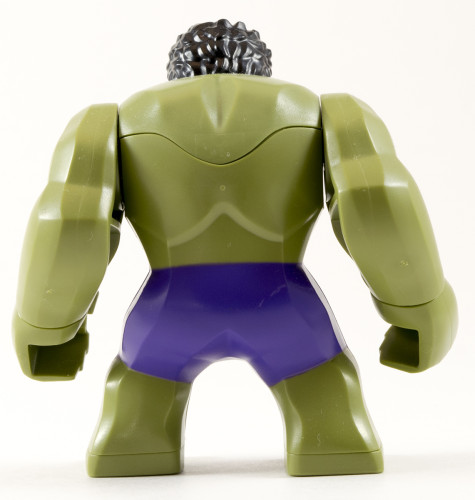 I should have taken a picture of the back of the others, because while similar, this is a new mold for the hulk. Similar, sure, but different.Â The “hair” portion of the bigfig is new, and the printing has been updated for his face. It’s now two pieces instead of a single piece for the torso. The neck muscles are also smaller, as are the shoulder muscles.

As a movie fig, it’s certainly an upgrade and a closer match. Of course, that being said… I’m still a bit “meh” on the bigfigs in general. He’s not a bad figure, but I kind of wish we’d get a Bruce Banner figure or something like that in a set. 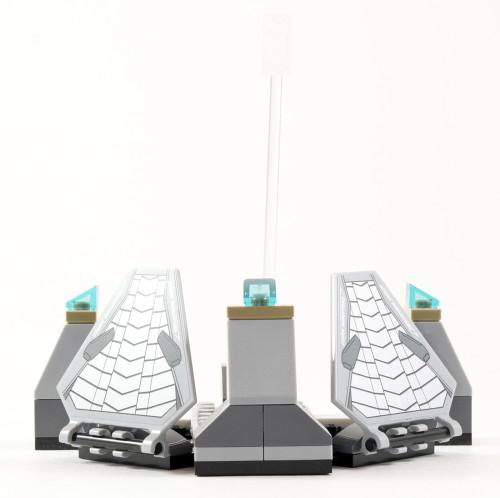 There is a part to this set other than minifigures and the Hulkbuster armor… kind of. Â It’s apparently the container that Stark fires to contain the Hulk long enough for the stuff to get there that he’s going to hit the hulk with. Of course, in the movie, it’s a completely contained shell that he eventually punches out of and here… it’s kind of like the balcony in a cheesy SyFy movie. Outside of the context of the movie, I like the parts that go into this, especially the little wings that are typically associated with Jedi Starfighters. The wings/flags plus the stickers could make for some interesting customs, which could get me checking for these on the aftermarket. So, inaccurate, but something I want. 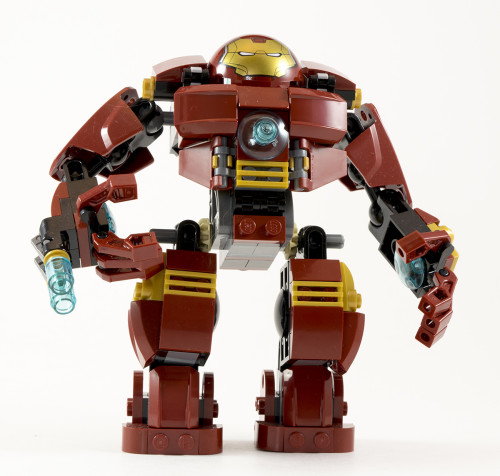 Really, though, this set is about the Hulkbuster armor. Let’s not kid ourselves… we’re buying this set 25% for Scarlet Witch and 75% for this guy. It’s the second mech-heavy set we’re getting this year, and if I had it put together, I would have totally stood this toe-to-toe with the Batman Mech in the Gorilla Grodd set. At that point, it’s basically two billionaire playboy vigilantes that are racing their expensive suits. 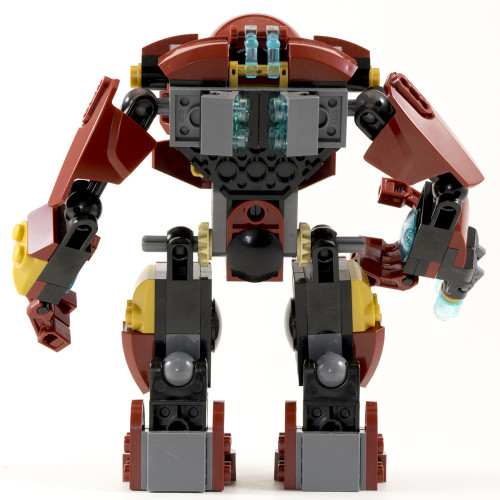 My money is on Tony. While Batman will never give up, he also won’t kill. Tony has killed a whole ton of people across the movies directly. Not through inaction or negligence (like running a speeding train through downtown or the general use of explosives and stupid driving), but just by straight-up shooting a guy. Plus, I’m pretty sure his armor can stand up to armor dogs and knives. Plus, Tony is totally going to cheat. 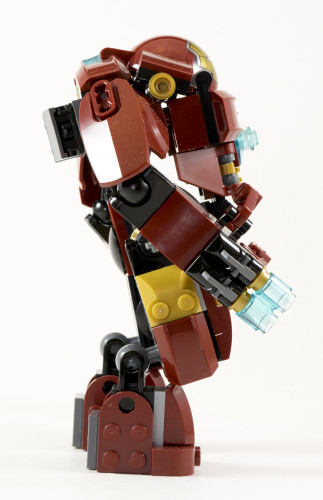 Overall, this is a better mech than the Bat-mech. It’s more stable and articulated, and doesn’t have as much of a top-heavy problem that the other one does. That being said, it is still prone to tipping, you just have more choices to set it up to keep it from doing so. We get the new brick-blasters for his right arm and a whole mess of dark red. 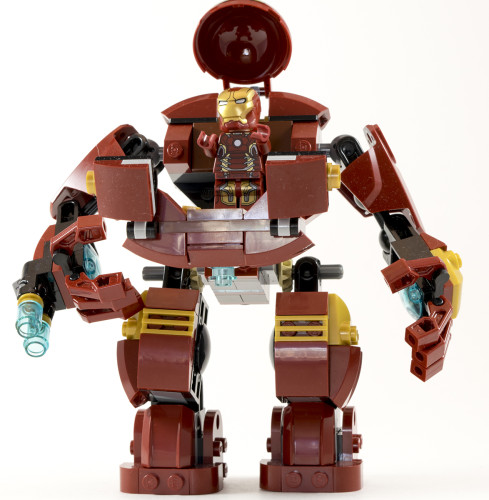 The armor captures a very important play feature, and that’s dropping our Iron Man minifig into the big armor and sealing it all up. That being said, the scale isÂ a bit off, but that’s more because the armor is a bit too squat and fat. It actually matches the minifigure to torso that the source material does, but it feels quite a bit wider than it should be. It does speak to some of the problem in scale between it and the Hulk, though, since it was more of a slug-fest between them and they weren’t so vastly different in size. 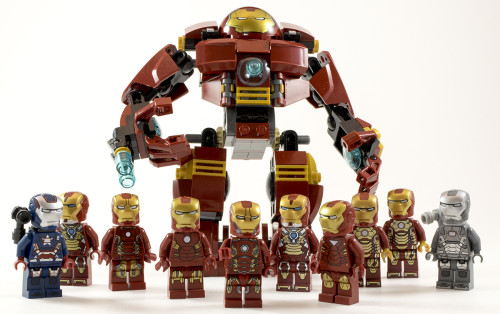 We now have a collection of armors and are one-step closer to getting a House Party going. Sure, I have a couple of duplicates (this was less of a set them all up and more like grabbing what was in my bin) and I tossed in Iron Patriot and War Machine… but it was still fun.

Ultimately, this is a set that’s saved by the fact the price tag, which is a pretty rare thing these days. The “cage” is just an afterthought. Scarlet Witch is a huge bonus, Ultron is a good potential generic, and Hulk is more accurate. Iron Man is… Iron Man, but he was essential for this set (for once). The Hulkbuster armor (and not Hulk Buster) is a pretty fun mech that was decently movie accurate (by itself… the rest of the set, not so much). It’s a solid 4 out of 5, though it has a bit more value on sale.

Verdict: A good four out of five. You can pick up 76031 The Hulk Buster Smash on Shop @ Home, currently with a short backorder to June 1st. 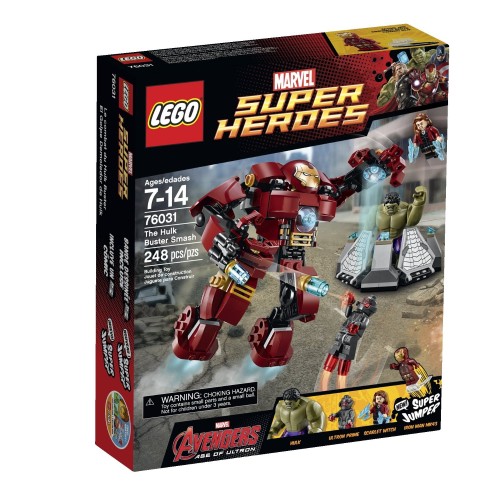