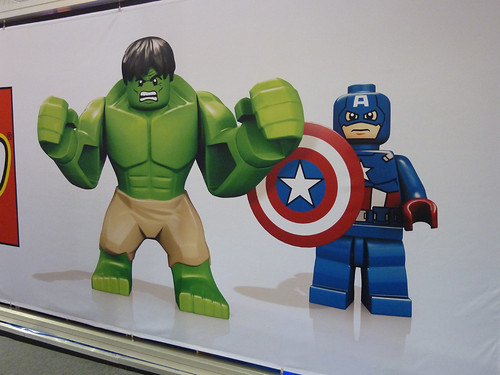 Now, this part of the Lego stand was shrouded (quite literally) in secret, with only one or two people being allowed in at a time.Â  I was shown the DC sets that we’ve already seen (and some of us have already bought).Â  The one feature of the 6863 Batwing set that they were showing off was the pretty accurate shadow the batwing creates.

We quickly moved onto the Marvel sets, which were in a section of the stand where they had a bigfig / maxifig build of Ironman which was super cool.

I kinda glossed over the Hero Factory / Super Heroes combos because they didn’t really appeal to me.

We then came to 5 new sets from the Marvel line :

6865 Captain America’s Avenging Cycle … this was the only set on display to feature Captain America, who was sat astride a motorbike.Â  The rest of the set was missing, because Marvel had asked Lego not to show it, because it would spoil part of the movie?!Â  Anyway, there’s another un-named minifigure and vehicle … one can only assume it’s an enemy of some sort.Â  Priced at Â£11.99, so a bargain whatever!

6866 Wolverine’s Chopper Showdown … Comes with Wolverine, Magneto and Deadpool … the figs were all pretty amazing.Â  Wolverine has normal hands holding the claw pieces, rather than anything moulded like the collectable minifig boxer, as we feared.Â  I can’t actually remember the vehicles included in the set, sorry!Â  Priced at Â£19.99.

6867 Loki’s Cosmic Cube Escape … Comes with Loki, Hawkeye and Ironman.Â  Hawkeye is driving a jeep type vehicle with Loki in the flatbed at the back … he comes with a custom headpiece and staff and the “Cosmic Cube” (a 1 x1 clear brick!).Â  I spent most of my time drooling over the Ironman figure, which was brilliant.Â  My fears over the head being too large were instantly eased and I was amazed to see that the front of the helmet lifts up to reveal whichever of the double sided printed head you’ve got facing forward.Â  Priced at Â£19.99, this set is a must buy purely for that fig!!

6868 Hulk’s Hellcarrier Breakout … I think this was Bruce Banner’s lab?Â  Not sure … but anyway, the set comes with Hulk, Hawkeye, Loki and Thor.Â  The Hulk figure was pretty damn cool, articulated and I liked the fact the head was in the shape of a normal Lego minifig head, albeit it bigger to be in scale.Â  The Hawkeye figure seemed to have a new bow & arrow type weapon.Â  Priced at Â£49.99

6869 Quinjet Aerial Battle … A pretty substantial set, with the Quinjet being pretty large, very sturdy and eminently swooshable.Â  Quite a bit of play features (moveable wings, cockpit, pop out undercarriage thingy) and minfigures Black Widow, Ironman, Thor and Loki.Â  Priced at Â£69.99, I think … although I don’t seem to have written the price down!

These sets are due to hit in April, so not long to wait.

And that was it … no sign of any Spiderman or Green Lantern sets, so maybe they’re coming later or perhaps they’re retailer exclusives.