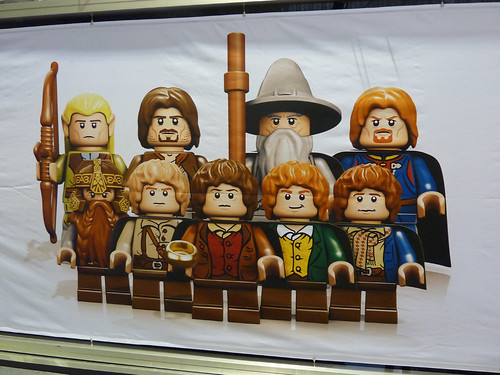 Now, before I try to write this up, I’m going to qualify this post by saying I’ve only seen the first hour of the first LOTR film!Â  I got bored, so stopped watching the rest.Â  Yes yes … I am a heathen … get over it.Â  With that in mind, forgive me if I miss any important bits out.

However, despite this lack of knowledge, I was bowled over by these sets.Â  Fans of this licence are going to LOVE these sets.Â  It’s another line where the minifigs are the star, but even so, I found some of the supporting buildings to be very cool too, the Helm’s Deep castle being a particular stand out.Â  They’re well constructed and detailed.

9469 Gandalf ArrivesÂ  … a scene I recognised!! ;-)Â  You get Frodo and Gandalf with cart and fireworks.Â  A pretty cool opener of a set and a way to get the two most obvious (at least to a noob like me) from this range, all for a measly Â£11.99.

9470 Shelob Attacks … Gollum!Â  Now, even with watching only a hour of the first film, I know what Gollum looks like … the fig is a custom mould, with Gollum in crouched position with articulated arms, smilar in connection to the main body as skeleton / battle droid arms.Â  Printed face and “clothes” (i.e. bit of cloth round his nether regions!!).Â  The big spider (Shelob) is also pretty cool, with a winch being used for her spider silk, meaning she can be hung up if you want.Â  You also get Frodo, with ring (which is a gold chromed ring, sized perfectly to fit on a minifig hand) and Samwise Gamgee.Â  Priced at Â£19.99

9471 Uruk-Hai Army … Comes with Eomer, Rohan soldier and 4 Urak-Hai and a small section of wall, siege machine and one of the new horses, which features articulated back legs (which is an excellent new feature for the horses).Â  It’s designed to be joined to the Helm’s Deep castle, via technic pins.Â  The minifig printing was beautifully detailed, especially on Eomer.Â  Priced at Â£29.99

9472 Attack on Weathertop … Most of my time looking at this was marvelling over the new horses and moving them from stood normally to being on their hind legs only.Â  Even in that position, they were very sturdy.Â  This is a great inovation.Â  You get Frodo, Merry, Aragorn and two Ringwaiths on horseback.Â Â  There’s a small section of Weathertop, which includes a spiral staircase andÂ ruins at the top.Â  Priced at 49.99.

9473 The Mines of Moria … Comes with a great selection of minifigs, such as Pippin, Gimli, Legolas, Boromir,Â a cave trollÂ and two Moria orcs. The troll is pretty awesome and detailed … great printing on the rest of the figs.Â  Priced at Â£69.99.

9474 The Battle of Helm’s Deep … The castle here was really cool … pretty large and well constructed with curved walls.Â  There were new modified 2 x 2 bricks to simulate bricks, mixed in with the walls, which was pretty cool to see.Â  I can see people wanting these bricks on their own for added detail in building MOCs.Â  The castle comes with the “side door” feature, which I was reliable told is important to the story?!Â  ;-)Â  It comes with 8 minifigs – Gimli, King Theoden, Haldir, Aragorn and 4Â Urak-Hai warriors.Â Â  Priced at Â£99.99

9476 The Orc Forge … reminded me a little of the Dwarf Mine set from a few years back … comes with 5 orcsÂ  and a various forge related stuff and has a light brick, which was a nice feature.Â  Â  Priced at Â£39.99.

All sets are due to be released in August.Â  There was mention of Hobbit sets coming later in the year, perhaps January although that might be a little late with the films release in December … who knows, they might land early.

Anyone want to lend me the films? 😉