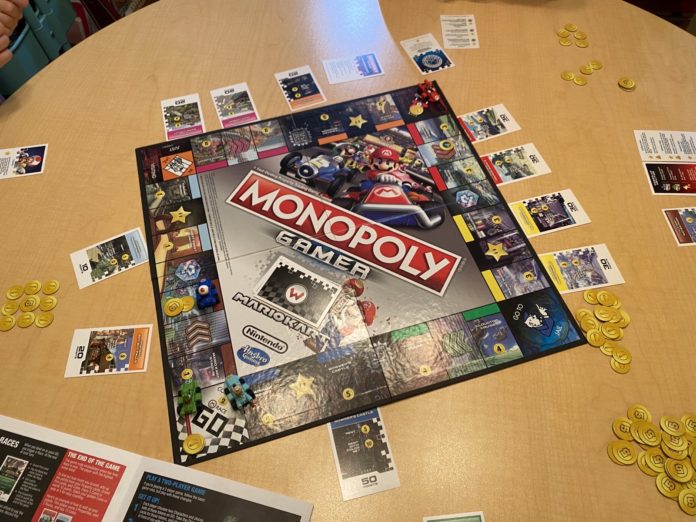 I hate Monopoly. I don’t know why it’s such a popular game. It takes hours and hours to play; it takes forever just to pass go; building a hotel is nearly impossible; the “go to jail” mechanic is just broken and asinine; and if you run out of money it’s impossible to make a comeback. It’s just a bad, bad, boring game.

Of course it wasn’t until about a year ago that I came to this realization when I tried playing Pokemon Monopoly (Kanto Edition obvs) with the wife and daughter. We were all so bored and without wheeling and dealing on properties it became pretty much a deadlock. When we all agreed to stop playing, all I could say was, “Man, this game sucks.”

But I think even Hasbro knows that the game sucks because they keep tweaking the formula to try and make the game better and faster (there’s one called “Speed Monopoly” for crying out loud). The next version of Monopoly I played after Pokemon Monopoly was Monopoly Empire. That was a revelation! Instead of waiting for the other players to go bankrupt in order for you to win, you build an Empire by acquiring “billboards” (properties) and stacking tiles on a tray, known as your tower. The first to reach the top of the tower wins. Games were 30-45 minutes long. This was by far more enjoyable than regular vanilla Monopoly. 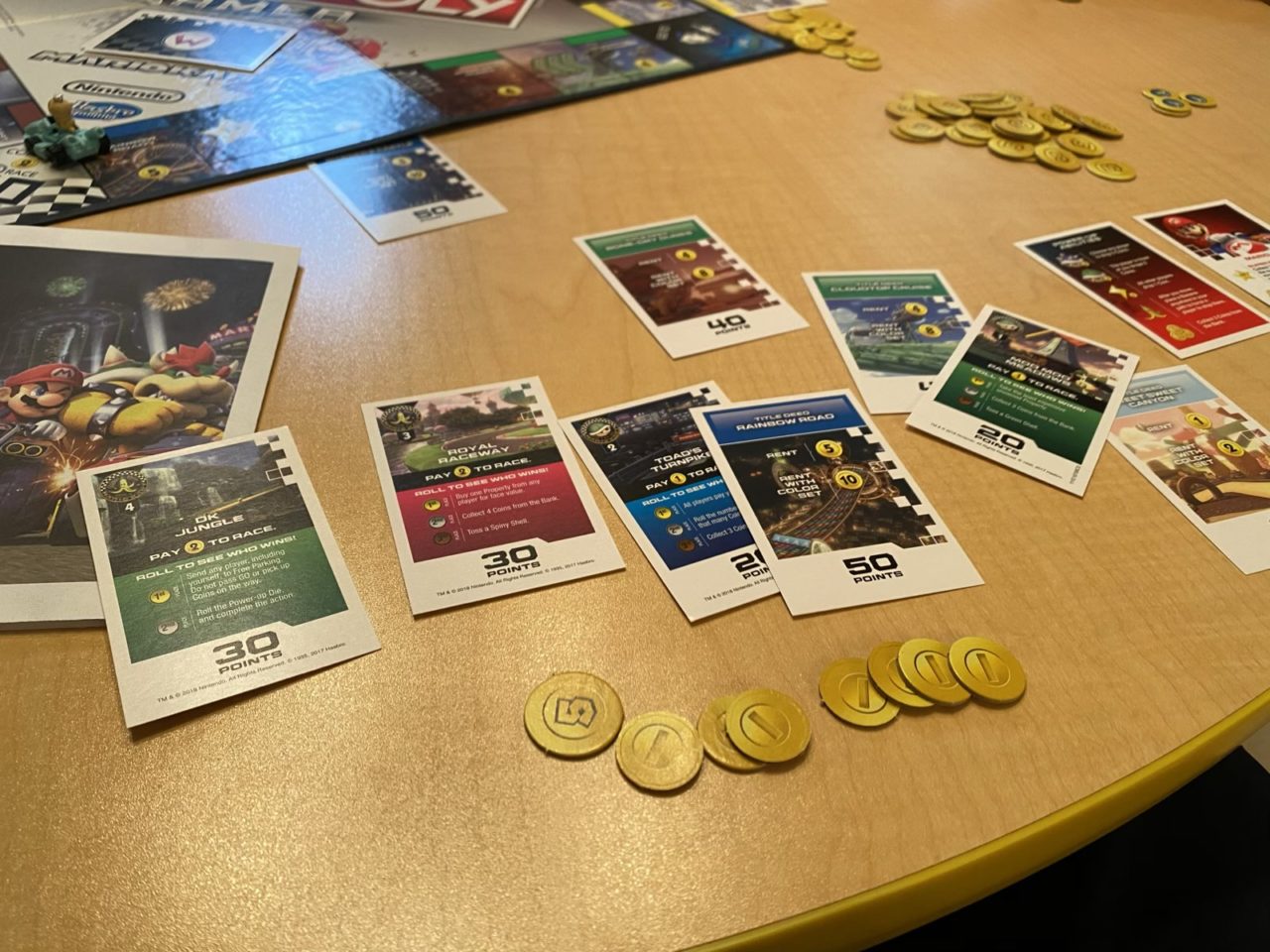 Monopoly Gamer Mario Kart changes the formula once again by infusing elements of Mario Kart into an altered form of Monopoly. You still buy properties, known as tracks, like Sweet Sweet Canyon and Rainbow Road. But there are less total properties to collect, equating to less spaces per side so making a circuit around the board takes less time, even with just one die that has numbers. 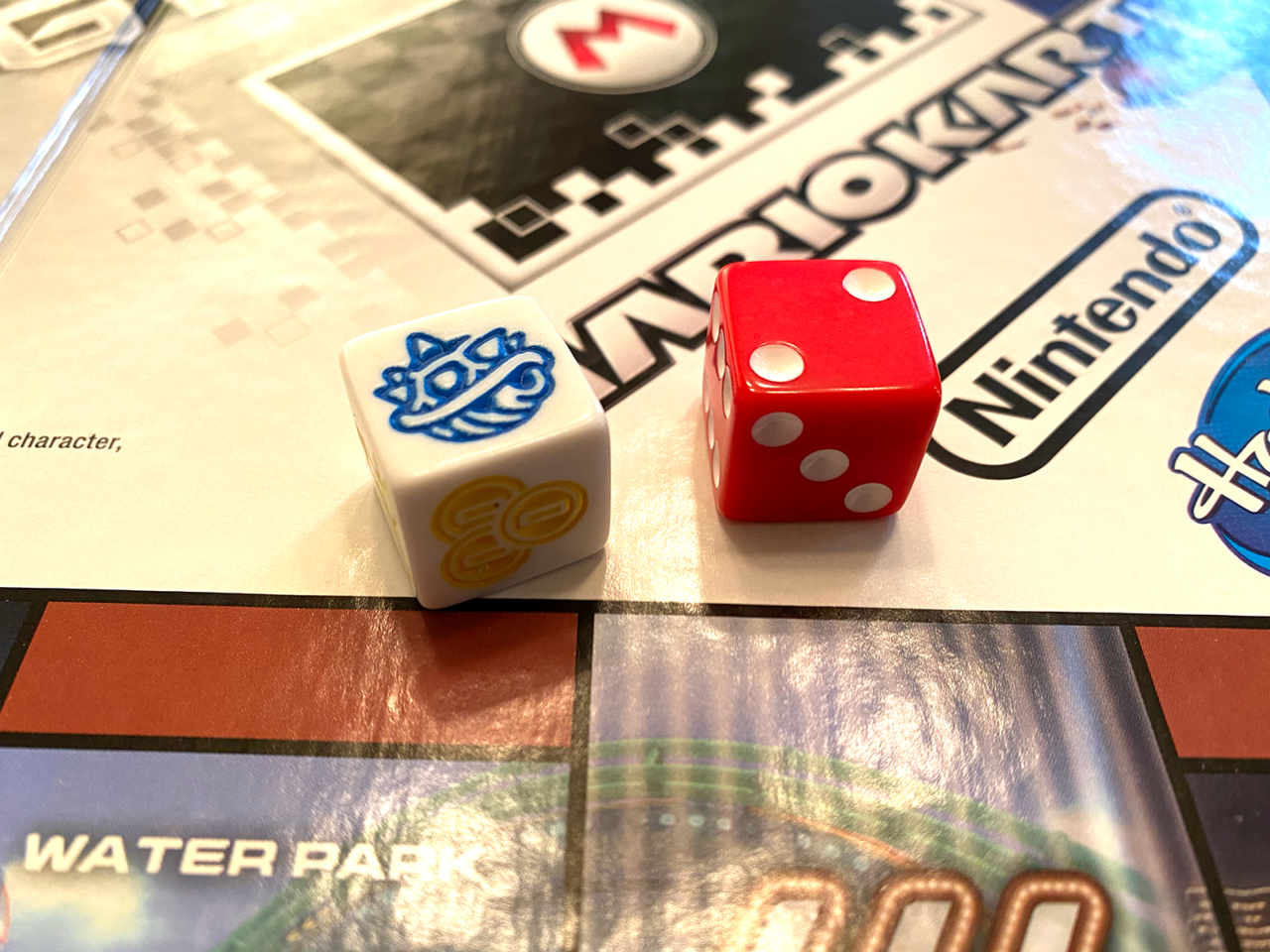 There are two dice in the game but only one has numbers that lets you move. The other gives you a Power-up Ability. The Power-up die gives you one of six actions: Spiny Shell lets you target any player to drop 3 coins, Green Shell causes the next forward player from your position to drop 3 coins, Lightning Bolt causes all other players to drop 1 coin, Coins lets you collect 3 coins, and Banana lets you drop a Banana token on any space you traveled on after you move. (An easy house rules mod for Green Shell would be to let you choose the next player in front or behind to drop 3 coins. That would have been more true to the spirit of the Green Shell). On your turn, you execute the respective action of each die in any order. And depending on your character, the Power-up Ability can give a bonus effect in place of the default effect. 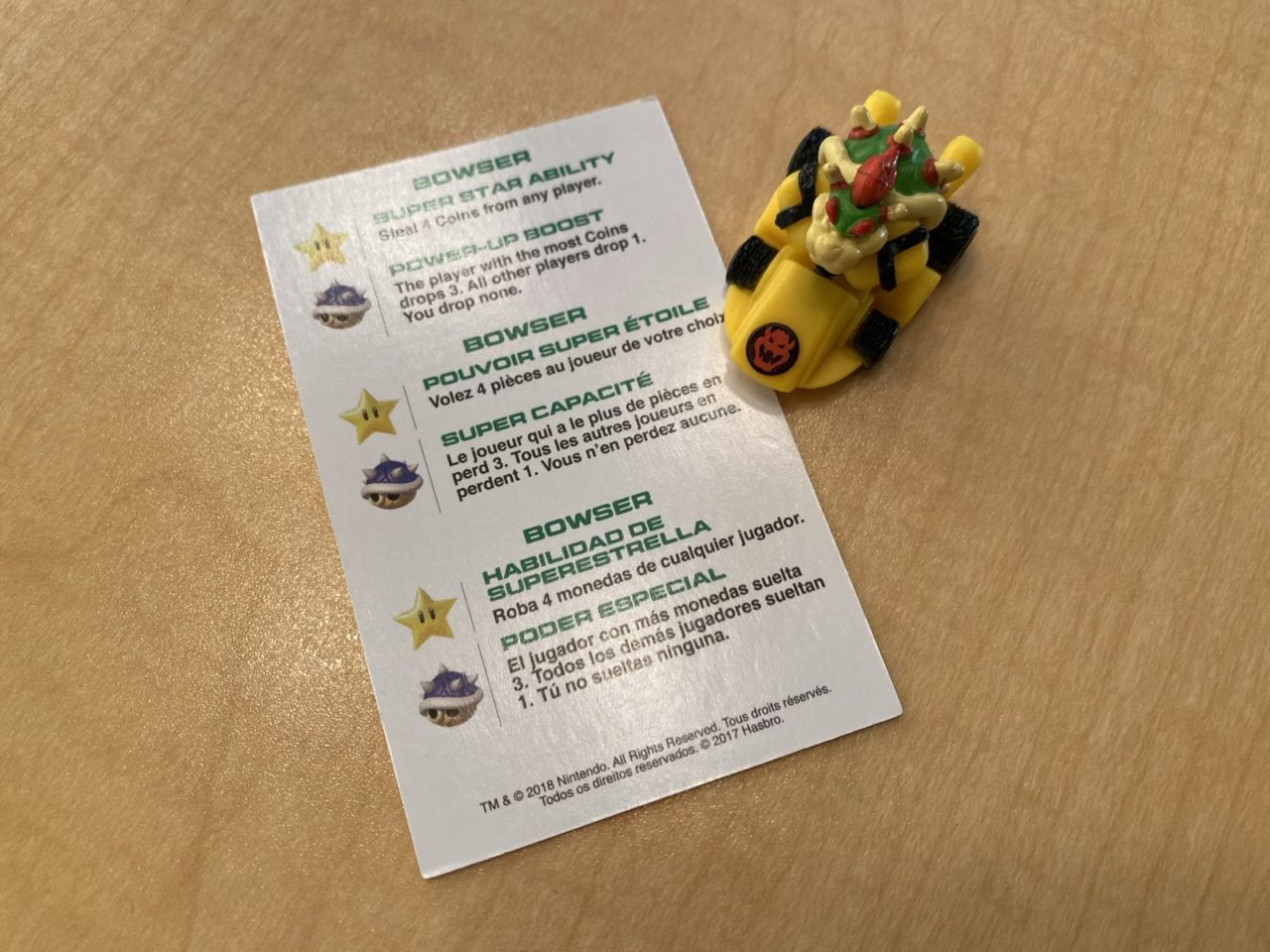 The Spiny Shell normally lets you target any player and causes them to drop 3 coins. But if someone’s playing as Bowser, for example, the Spiny Shell has a different effect: it now causes the player with the most coins to drop 3, and all other players drop 1. 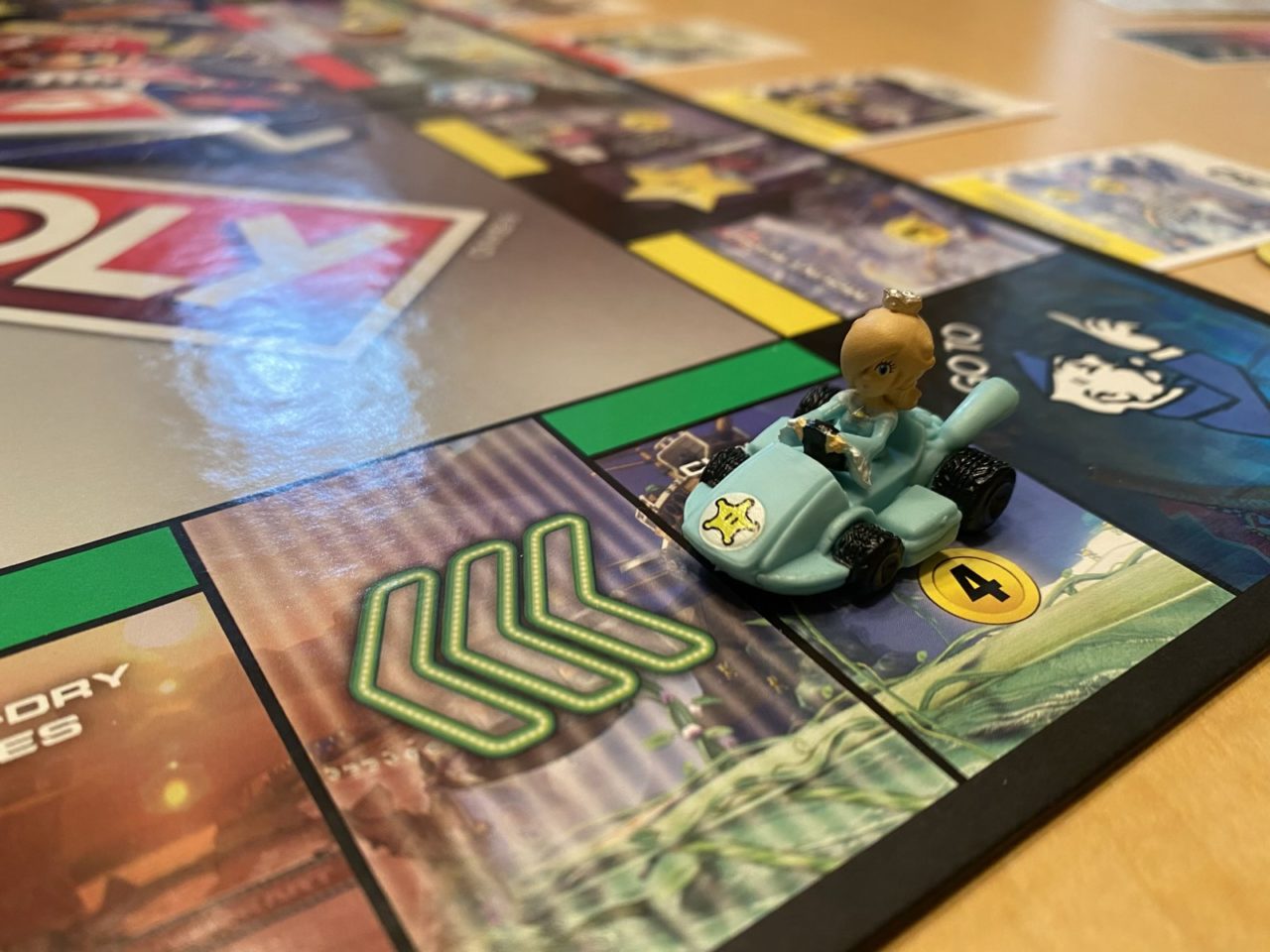 Despite having just one die for movement, there are Boost Pad spaces around the board. If you land on a Boost Pad, you can roll the numbered die again and move that many spaces. Power Up Boosts for certain characters will also let you advance further and faster. 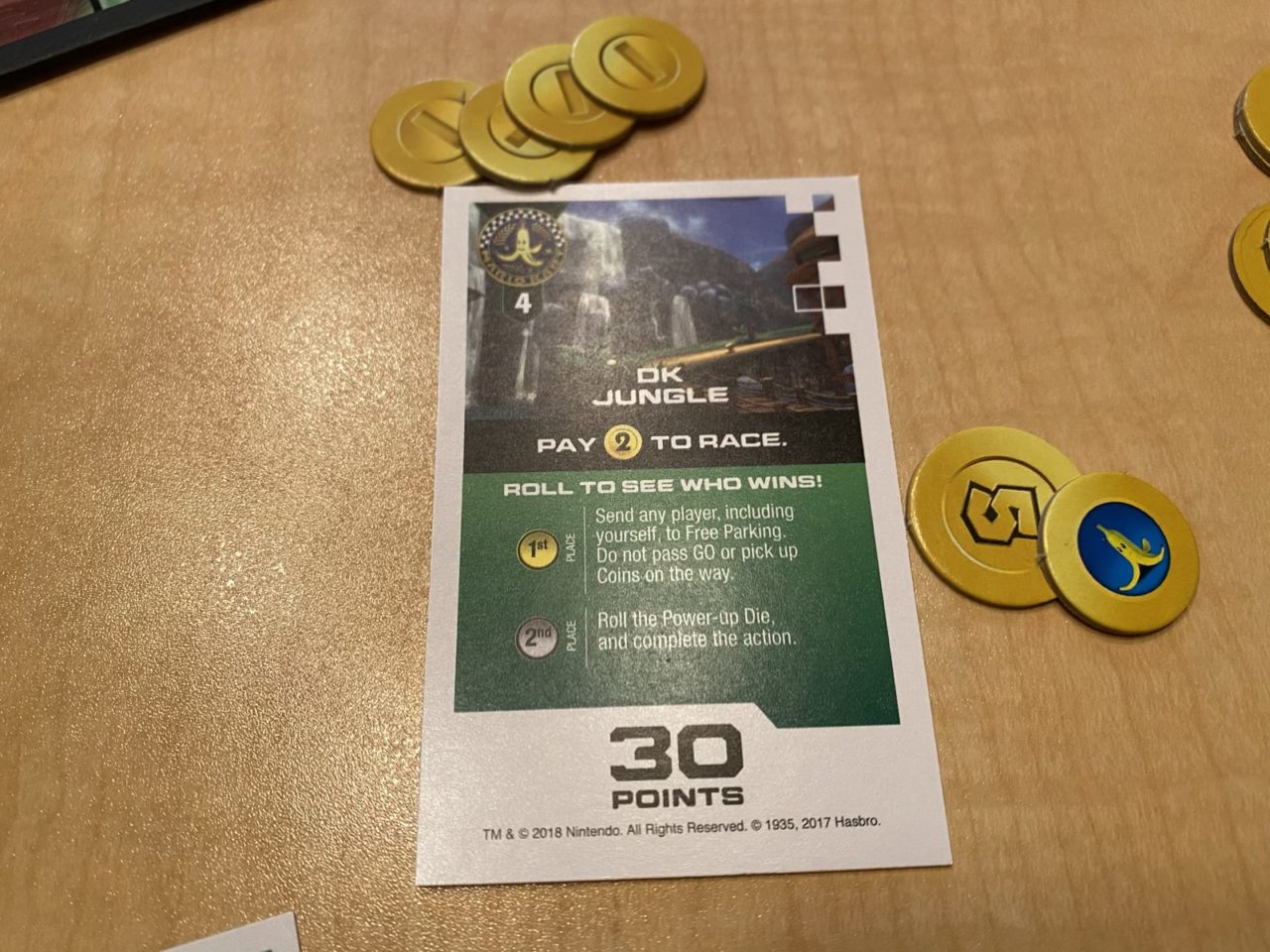 Once any player passes Go, it triggers a race. The player draws the top card from a stack of race cards. Players may pay an entry fee to compete by seeing who can roll the highest number. Prizes are doled out according to placement with the winner taking the track card and whatever prize 1st place awards. There’s only 8 races total with the final race allowing a rematch of any previous race. Once the final race is played out, the game is over. And this is what I like: much like Monopoly Empire, the game has a definite end-of-game trigger. You’re not waiting for everyone else to run out of money, you just run races until there are no more. Games can be made faster by removing some race cards from the stack, or extended by going through races twice before a winner can claim the card as their own. If each player progresses at the same pace, a race can be done when everyone completes two full laps.

These races are somewhat important to participate in because the winner wins the track and keeps the track card, adding to their pile of other tracks. At the end of the game, all of the points at the bottom of the track cards are tallied up to determine who the winner is. So the more races you participate in the better chance you have of increasing your final score. I’ve played a handful of games and in a few of them the winner of the game overall was decided on whoever took race #8, which is worth 100 points. 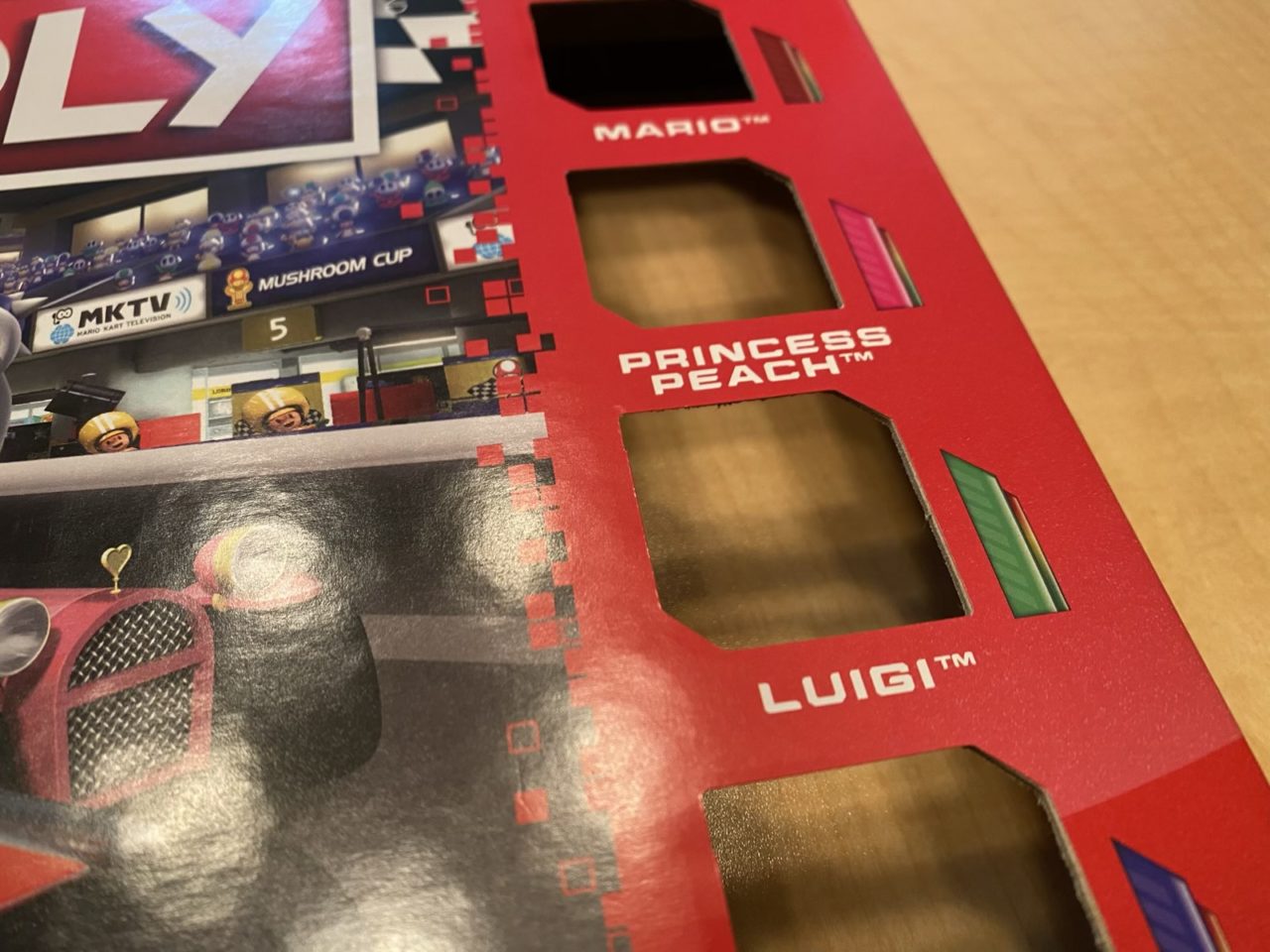 The game comes with four characters: Mario, Luigi, Princess Peach, and Toad. The packaging kind of blows because the lid is die cut necessitating keeping the plastic tray and tray cover that holds the characters. You can flip the lid around 180 degrees and toss the tray but such considerations shouldn’t even be an issue. It’s probably the preferred method though because it allows you to store all of the tokens in a separate space with enough room for the extra expansion packs you can buy. 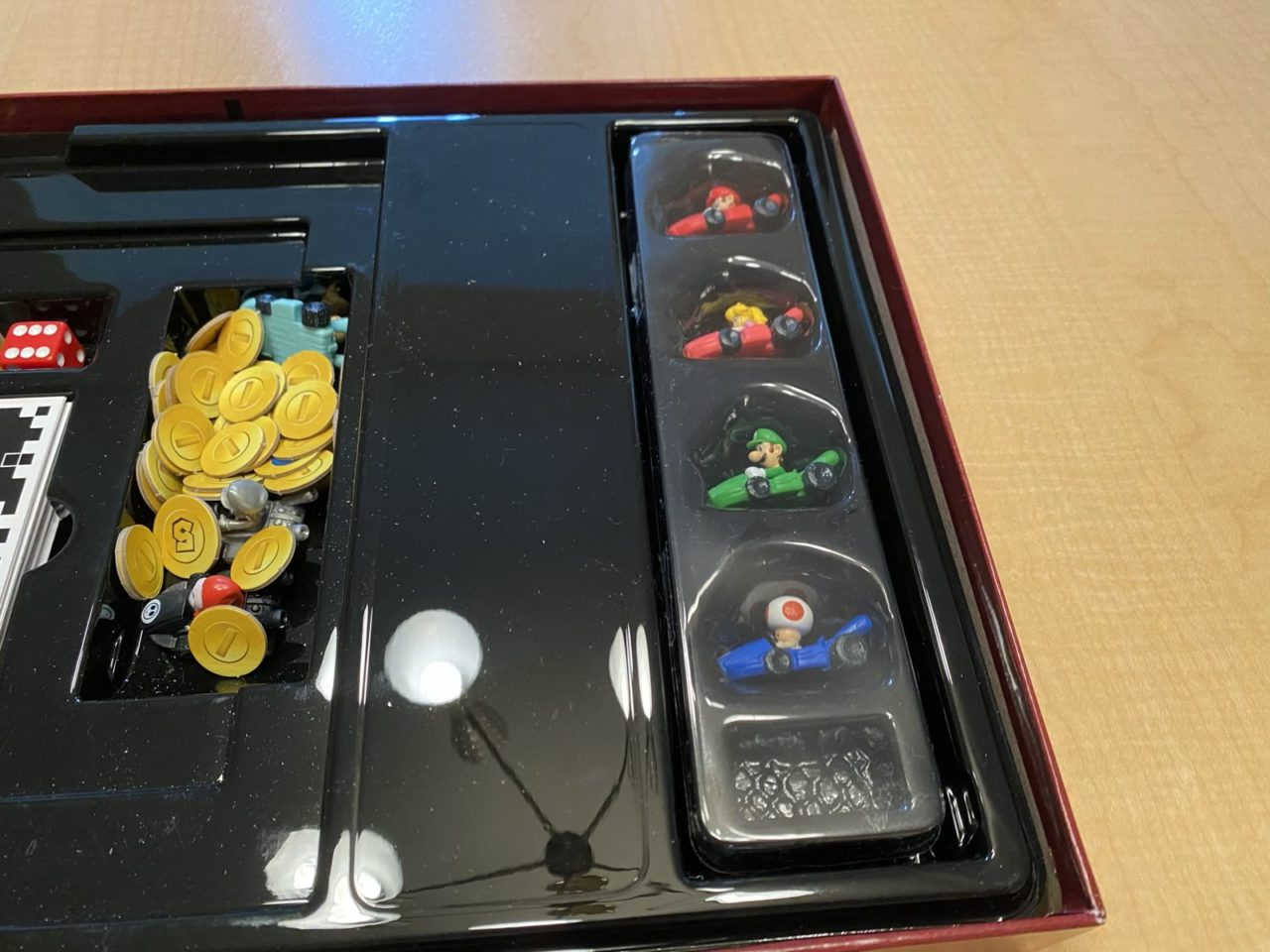 There are a total of 6 expansion packs, known as Power Packs, which will let you add new characters to your selection: Bowser, Donkey Kong, Rosalina, Yoshi, Shy Guy, and Metal Mario. Of course, I had to go all out and get them all. They all appear on their Standard Kart which is just fine. 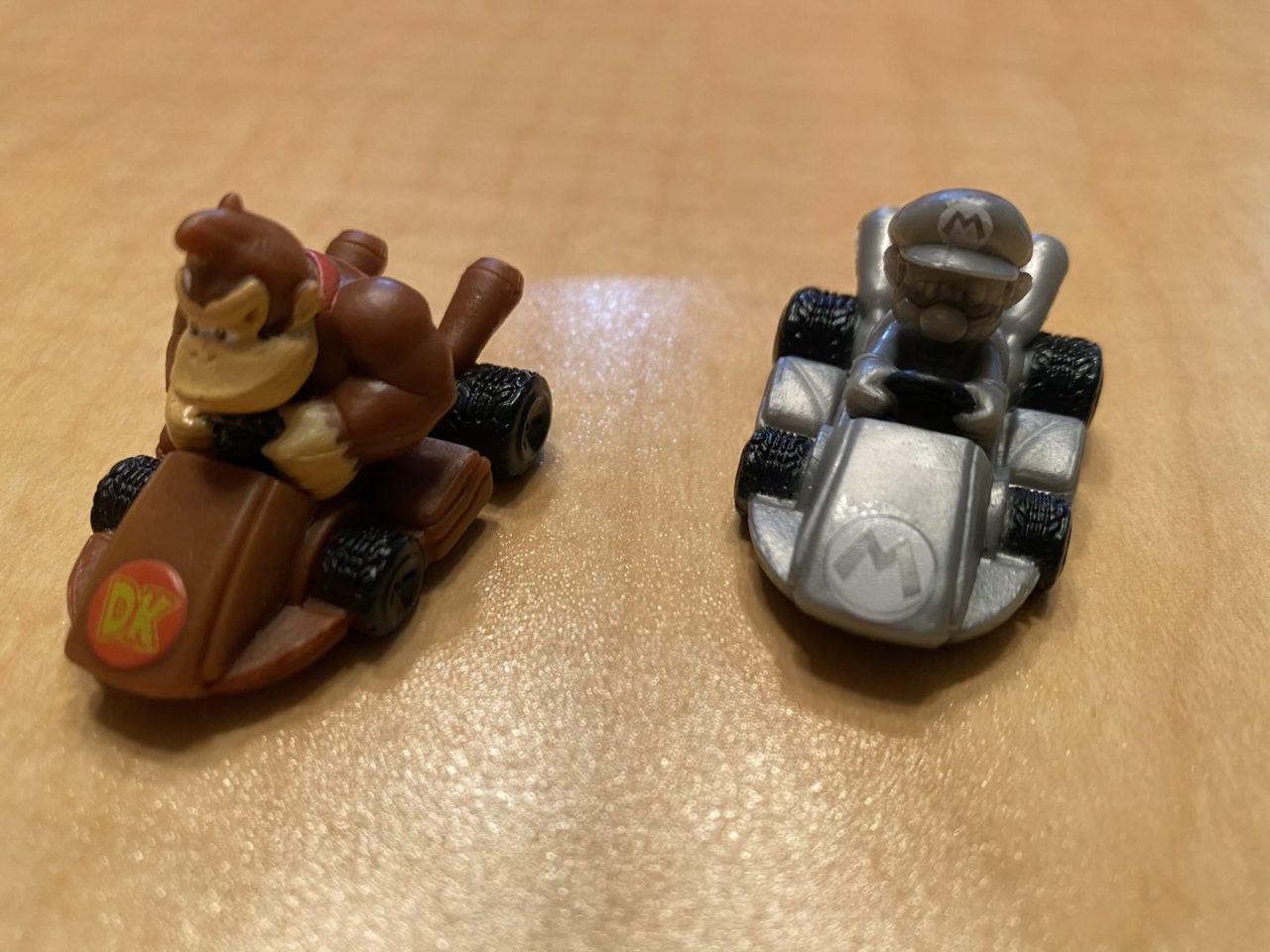 The broken “Go to Jail” mechanic is still there with the same asinine rules to get out. Instead of trying to roll doubles across two turns you’ll need to roll a 6, or you can pay 5 coins for an early departure. I think the Jail mechanic could have been fixed for this game by changing it to something akin to being knocked off the track. Say, instead of going to jail on the opposite end of the board and not passing Go to collect your allowance, you just lose your next turn and stay put. A change like that could easily be house ruled in and might be something I try next time.

Economy in the game is handled with cardboard tokens for coins instead of paper play money. Be prepared for the coins to change hands, be dropped, and be picked up because there is a lot of that going on, like a LOT. It’s almost impossible to run out of coins unless you land on Go To Jail three times in a row and skip passing go and you ran out of money to bail yourself out after the first two times and only have one property to your name that nets a total of 1 coin should someone land on it while other players are traversing the board, picking up properties and more or less leaving you in the dust. That was just a made-up scenario, by the way; that didn’t happen to me or anything like that. Twice. You’ll want to stockpile as many coins as you can at the end because for every five coins, you get an additional 10 points added to your total.

Games run about 30-45 minutes and can even keep the most squirrel-y of kids engaged long enough to pay attention all the way through to the end. Monopoly still sucks; Monopoly Gamer is a WAY better take on it despite some of the legacy issues persisting through to this version. As someone who really enjoys Mario Kart, it was enough to get me to buy it. I didn’t know what to expect from the game but I was pleasantly surprised that it wasn’t just another license cash grab like Pokemon Monopoly was, amongst a thousand other licensed versions. Hasbro changed the formula just enough and cleverly incorporated elements of the video game to breathe new life into a dumb game whose popularity is still a mystery to me. Monopoly Gamer Mario Kart gets a thumbs up for me and I’d rate it as 3 stars out of 5. I kind of want to bump it up a star because of how much fun I have with the kids playing it but I won’t because it boils down to this: it’s not a must have when it comes to board games; it still has the essence of Monopoly which can be a huge turn off for a lot of people. But it’s enjoyable enough that should it find its way to your board game library, it won’t make you want to hurl. So a 3 it is.

This is the part of the review where I’d put an affiliate link but the game’s been sold out now from regular retailers and your only choice to source the game and Power Packs are from third party sellers. I’m not sure how much retail was, but I’ve seen prices as low as $30 bucks. And, sorry, I’m not giving away my copy either.

Like the review? Consider helping FBTB keep the lights on by donating or becoming a subscriber. We get very few review copies sent our way these days so we rely on ads, affiliate fees, and donations to keep going. 100% of the money goes towards operational costs and set purchases for reviews, giveaways, and contest prizes. As always, we thank you for your continued support.

For the record, Hasbro did NOT provide us a copy of the game for this review.