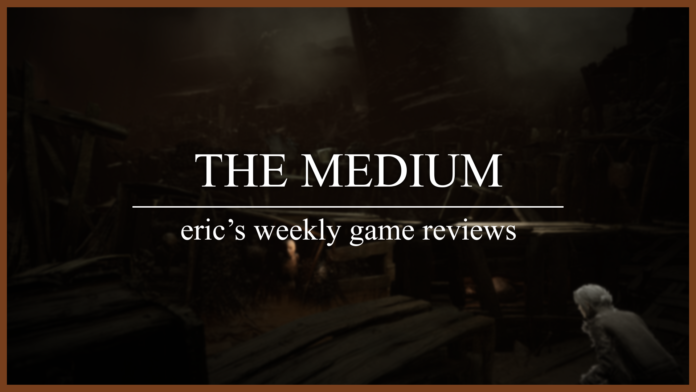 The Medium is boasted as Xboxâ€™s first true â€œnext genâ€ (or is it this gen?) game. And itâ€™s certainly true, graphically. Youâ€™ve got raytracing, reflections, and the game basically running two different scenarios at once.

You might have some questions about that last point. The concept is this: a Polish woman has the power to exist in two worlds at once. The world of the living (real world) and the world of the dead (Hell, I guess). So for the bulk of the game, your screen is split in two. On one side – real world. On the other – dead world.

My computer does not like this concept. It chugs down to a solid 20 fps whenever the game runs these two scenarios at once. And experiencing a game at such a low framerate is not really something Iâ€™m into. So I stopped playing, and put on the backburner for whenever I get an Xbox or a better GPU.

But the hour or so I played had some promise, even if it was bogged down by graphical glitches and a flat main character.

Itâ€™s fairly obvious that The Medium takes heavy inspiration from classic Resident Evil games, though it seems to grapple with balancing both the puzzle box aspect of RE games with the more linear story is wants. You have an inventory to combine objects, but you pick things up so rarely that thereâ€™s none of the inventory management that makes Resident Evil so personal and wonderful.

At the same time, the game really wants you to keep moving. Thereâ€™s hardly an exploration, and what little there is rewards you with a newspaper or something to read. Hardly worth it, especially with how slowly the character moves. For instance: in the second chapter, you go to an abandoned hotel. I thought the game was going to stick here for a while and let me really explore around, like a Resident Evil game. But, nope, itâ€™s extraordinarily linear. All doors except the ones you need to go through are locked or blocked off. So, I shrugged and just decided to abandon exploring. But maybe thatâ€™s on me – I insinuated too much about this game based on Resident Evil.

The main character is…not my favorite. Sheâ€™s one of those characters who always talks. Like, with everything. In a way that isnâ€™t realistic at all. I donâ€™t find her annoying; itâ€™s more that sheâ€™s so rarely quiet. I also wish there was a way to have her use Polish – since the gameâ€™s set there. She also has a fairly monotone voice, which can work sometimes with the melancholy tone of the game, but when scary stuff happens, or sheâ€™s getting chased, Iâ€™d like a little more energy. Again, maybe Iâ€™m spoiled by Resident Evil 2, where characters react to horror situations, you know, like people. Itâ€™s not the end of the world, and maybe The Mediumâ€™s main character changes by the end of the game.

The Medium is one of those games all about spectacle, that really benefits from the best visual settings you can give it. The problem is, it runs really badly, especially when youâ€™re playing in the dual scenarios. Thereâ€™s some potential here, and Iâ€™m pretty intrigued to see where it goes. Right now it seems to be stuck between Resident Evil and Alan Wake, and I think it needs to commit to one side to really shine. If I can ever run the damn game, Iâ€™ll do a write up with my findings.

Plus, itâ€™s on Xbox Game Pass, so, you know, itâ€™s basically free.