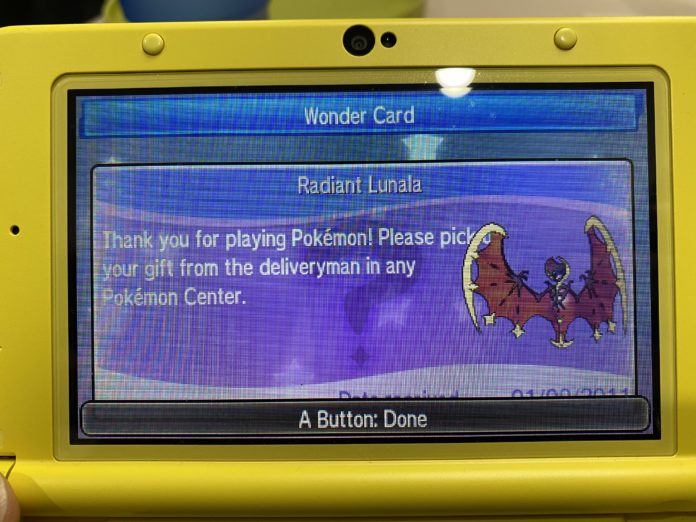 Right now, until GameStop stores close on November 1st, you can download either Shiny Solgaleo or Shiny Lunala by visiting your local GameStop store and scanning a QR code with the Pokémon Pass app. The Pokémon Pass app is their way for players to receive digital rewards, such as pokémon distributions, across a variety of their games. Gone are the scratch cards, finally. They weren’t great for the environment anyway. But by using the Pokémon Pass app, it introduces a couple of unwelcome changes.

First, it’s tied to your Pokémon Trainer Club account. So if you haven’t done so already, you’ll need to head over to Pokémon.com and create an account. Then, you’ll need to agree to the ToS for Pokémon Pass. Then you should download the app from the Apple App store or Google Play store. It’s a bit tedious but once you’re logged in you’re ready to redeem.

Head over to a GameStop and look for the poster that has the QR code. The app will automatically detect when you’re within range and bring up the scanner. Scan away and you’ll get a code. In fact, you can press a button on the app and redeem for more codes, up to three total.

The codes work in Pokémon Sun, Moon, Ultra Sun, and Ultra Moon. And I know there are dozens of us that get the pairs of games as they are released. So having all four games really isn’t unheard of. Getting just three codes makes no sense. I’d understand it better if they gave out two codes, to be used as a pair on Sun/Moon or Ultra Sun/Ultra Moon. But three? If you only bought the a pair, then a third code would be useless. If you bought both pairs, then you’d be short a code. My OCD can’t resolve the unevenness of this equation.

The codes are one-time use, just like before. But you can’t redeem more than one code in the same game. So you’re stuck with just one shiny per game. And since it’s locked to your Pokémon Trainer Club account, you can’t get more codes. So I did what any other player in my same situation would do: create a child account and get three more codes.

The codes don’t specify which legendary you’ll get. But based on my own redemptions, uou won’t get the Shiny of the mascot of whichever game you redeemed your code in, you get the opposite one, i.e. I received Shiny Lunalas in my Sun games.

I now have four shiny legendaries, two of each kind and, because of the stupid math, two codes to give away. Email me at giveaways@fbtb.net with either Sun, Moon, Ultra Sun, or Ultra Moon as the subject line. I’ll pick one winner by the end of the weekend to get both codes.