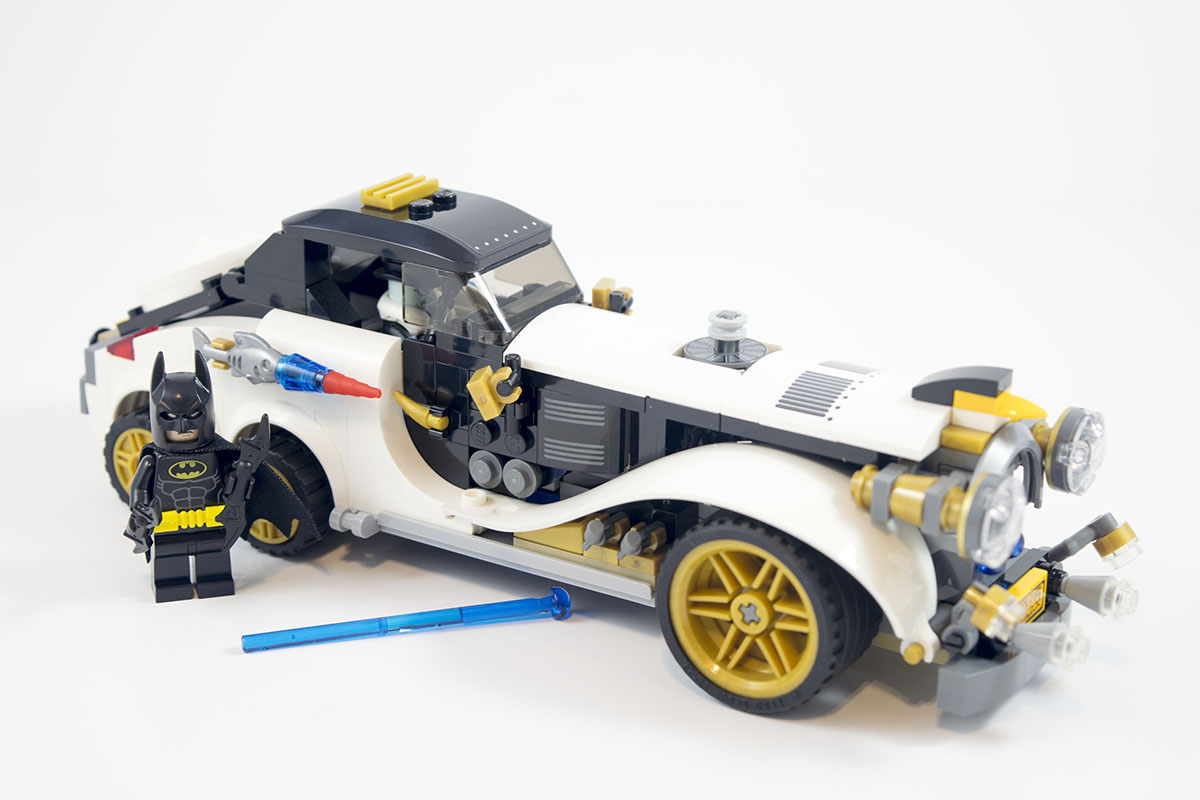 I’m pretty sure that The Batman Movie sets include seventeen different villain vehicles. Okay, the actual number is… four? Five if you count that pizza delivery cart, but themed vehicles, we get four: Joker’s Lowrider, Riddler’s Riddle Racer, Killer Croc’s Tail-Gator, and our review subject,Â 70911 The Penguin Arctic Roller. It was one of the last ones we got an official look at, but certainly seemed to be one of the most striking once the reveal was done.

Of course, after building it, I realized that 70911 was both the set number and the zip code that the set number apparently was sized to represent. Of course, that’s not an actual zip code, unlike the regular Super Heroes sets that are mostly made up of Texas Zip Codes (it makes googling fun when you’re an AFOL that lives in Texas). The bad joke I’m trying to make is that this thing is insanely huge, even by LEGO minifigure scale standards. It lines up against the Batmobile, a set that costs twice as much but was designed to be big and over the top. This one… I’m wondering if it was a design that got out of control because they wanted a certain style for the hubs and wheels.

Anyway, this $29.99, 306 piece set only includes two minifigures. If they were different varieties of the character in any substantial way, that wouldn’t stick out… but we got Penguin in the BatcaveÂ set and Batman in every single set that LEGO has released in the last thirty-four years (or all but two of them… I’ve got a lot of Batman minifigs is what I’m saying). Still, it’s obvious that there’s a very specific style they’re going for on the build, and you have to love the look even if you’re not that into cars. In the US, this looks to be a Target Exclusive set, so you get that or Shop@Home for your purchasing choices. 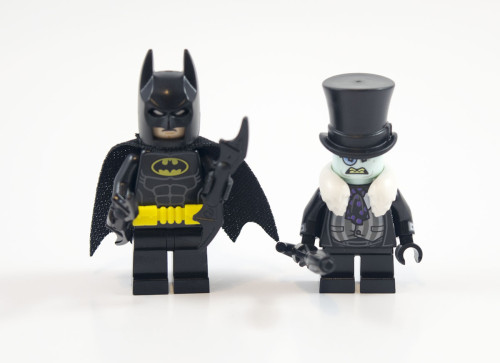 Like I said, we get two minifigs here, Batman and the Penguin. I really get curious about the reasoning behind the parts budgets when I see things like this. It doesn’t have that much higher of a part count than the Riddler Racer (though there are some obviously bigger parts)… and that has five figures. Smaller sets, like Joker’s Balloon Escape has the same number of figures, and the three $19.99 sets all have three figures. The larger sets vary a bit more, with Clayface having two but obviously a giant clayface, and the Joker Notorius Lowrider having three (though I’m willing to count that fantastic Harley figure as two figures). The big thing is that in most of these cases, there’s one or more custom figures or changes with the set to help make up the difference. 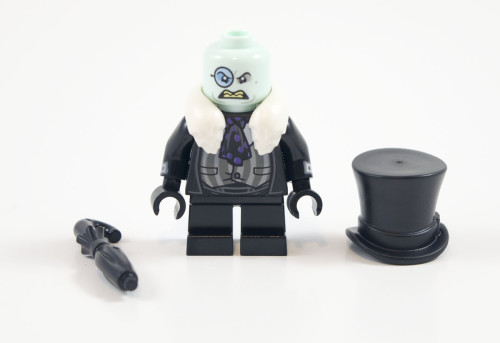 Here, we get Penguin with a different face. Otherwise, he’s the same as what we got in the Batcave set. The biggest thing going for him is price point, but I personally like the face in the Batcave set more. I prefer my Penguin more smiling and menacing than the angry scowl version. It fits the character better, both from the ’66 show and the comics in general. Still, that fur collar is fantastic on him, and if you’re going to pass on the Batcave, this is a good source for the character. 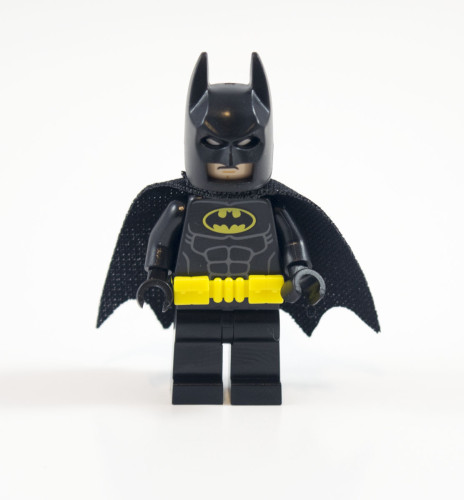 Batman is still the same Batman we’ve gotten in ten other sets. There are variations on the face animation, but not enough to actually notice. This set seems like a perfect opportunity to give us a suit variation like we saw in the trailer, butÂ instead it’s another one to tuck away. 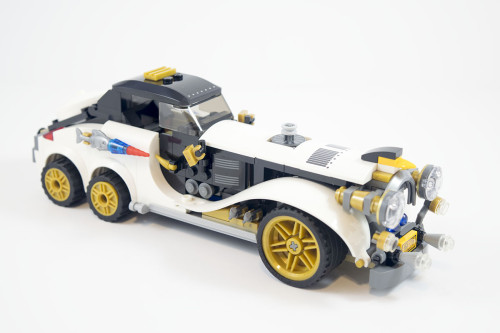 This is is clearly not a glorified battle pack… it’s all about the car. As a build, it’s quite nice. There are some interesting parts, and you have to love the use of the hot air balloon segments as the front fenders. The problem is, like I joked in the intro, size. It’s almost an identical length to the Joker Lowrider, though not quite as wide. 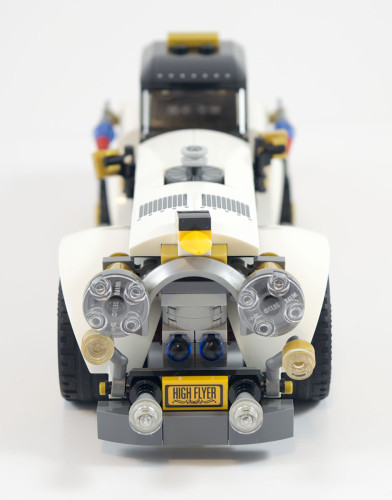 The difference, though, is the bulk of that set was intentional, designed around a 70s muscle car style, while this is designed around what I assume is a variety of 1930s Rolls-Royce models, especially when you look at the lights. The Last Crusade burned that pattern into my nerd brain, and they did a good job capturing it here. Also, you have to love the dedication to the jokesÂ in the license plate. 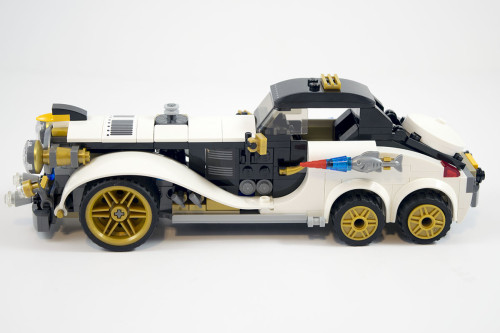 But those cars, while big, weren’tÂ that big when you go for that single row look. The odd thing here is that, even with the size, it just barely fits the Penguin. So we get barely one figure inside a car that has its own gravity. Also, I don’t get the fish things on the side. I know I usually harp on missiles and the like, but they’re fine on sets like this where they make sense. But I’m not sure that really makes sense in any way… they clip on the side, not fire. Are they weapons that come off to use? 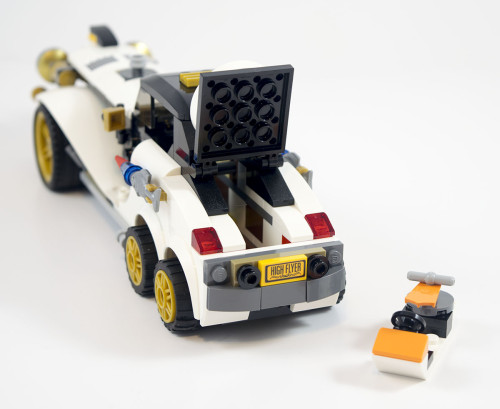 The trunk does tuck away another play feature, of sorts. It might actually be the most throwaway thing in any set, something that can be tucked away in the trunk. I… I’ve got nothing. I guess it’s a little boat thing, but it makes no sense. Here’s how LEGO polished this little turd:

I guess it’s an escape pod… though that description features more words than the pod does parts. If it was something that somehow slid out of the car as a getaway, it’d be a cool little play feature. But there’s a divider to prevent anything like that from working… you have to remove it and then put Penguin in the seat. It’s already pretty annoying to get him in and out, so it seems more like something you’re inclined to forget. Also, for further reference… a single flipper is not “penguin details.”

This is a confusing set to try and rate. I usually try to look at figures as the thing that pushes a good set to great (or vice versa), not as the purpose of the set. Here, they’re what really seem to drag down the set. The car itself isn’t bad, it’s just really big. It has that same style that I liked in the other car sets, but at the same time, I’d have to call it the weakest of the ones I’ve built so far. If you had to pick one of the $30 sets, it’s not even a contest, and the Riddler Racer wins. The car being good but the figures being bad means I’m going to call this set a 3 out of 5. Probably better on a sale, but otherwise fairly easy to pass on.