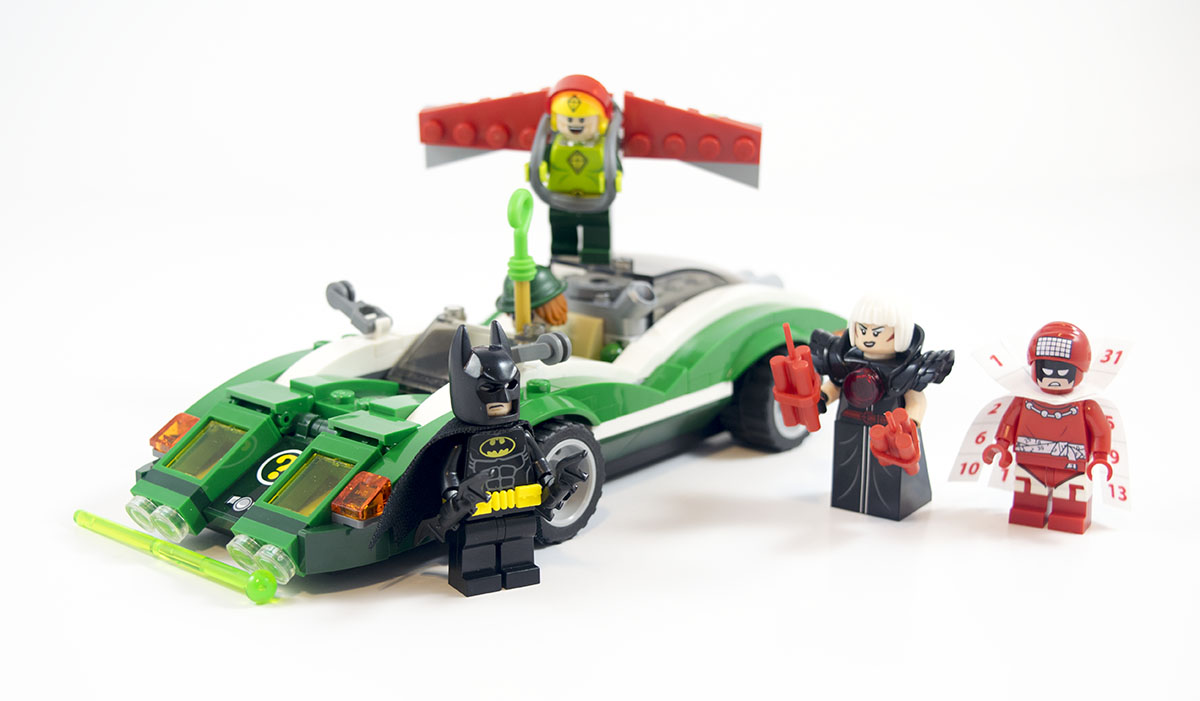 It was pretty clear with the very first LEGO Batman movie trailer exactly what direction they were going to go with the movie… that delightful mix of reverence and absurdity that made the The LEGO Movie work so well. The early sets gave us a taste of that, the Collectible Minifigure Line turned it up to 11… but I think seeing this set was when I knew the CMF was only just starting to scratch the surface.

The craziness of the Eraser and the Calculator are matchedÂ by Calendar Man and Kite Man, and we get one of the classic villains in Riddler and one of the more contemporary ones to see some love (in Beware the Batman) in Magpie. I’ve built all but four of the LEGO Batman movie sets at this point, and the thing that seems to differentiate between good sets and bad sets is the amount of style and flavor that goes into the build. In reviewing 70903 The Riddler Riddle Racer, I think it’s safe to say that it has style in spades.

The base vehicles have had a great amount of style, like the Lowrider and Batmobile, and when you take and mix a bunch of interesting characters, you tuck in a whole lot of value. This is one of two $29.99 sets, along with 70911 The Penguin Arctic Roller, and comes in a seemingly low 254 parts, which is offset by the four figures I mentioned above. I built both sets at the same time, and, spoiler alert… this might just be my favorite of all of the vehicles I’ve built so far.

I haven’t been this excited about a set lineup since… I don’t know, probably Toy Story or maybe the first year of the Super Heroes stuff. I’m more than a bit burnt out on all of the Star Wars rehashes and overpriced glop, and not even my love of Rogue One has gotten me excited to go buy all of those box-shaped ships. Pretty much the only licensed line I’ve kept up with has been Super Heroes, and that’d been slowing down a bit as well… until these Batman sets came along.

Five figures in a $30 set is already pretty fantastic, made even moreso by the fact that, excluding Batman, they are all unique to this set. Three of them are brand new characters in the Super Heroes lineup to boot, and pretty much everything about the Riddler is new. I mean, if these were just CMF figures, you’d be at $20 just for the figures alone (and probably annoyed you got another Batman figure). 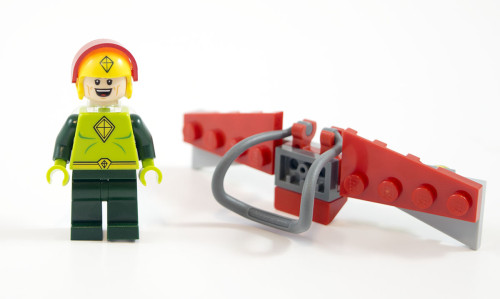 There is something gloriously absurd about Kite-Man. I mean, he has the audacity of riding around on a glider and calling it a kite. He shows up in the comics about once a decade, usually as a one-off joke or comment about the silliness of everything. He rides aÂ Kite, the single least intimidating mode of transportation that’s not a two-person swan boat in a kiddie pool. As a figure, I love that smile, and as far as I’m aware, this is the .Â Edit: Nope, they originated with the Toy Story aliens that I own like thirty of and failed to notice.

The kite isn’t all that bad, but has the unfortunate effect of making the figure impossible to stand up without positioning him awkwardly or putting him on some sort of base. The bendy-plastic element used for the handles, which may have been used somewhere else, but is new to me, works well over some weird handles. 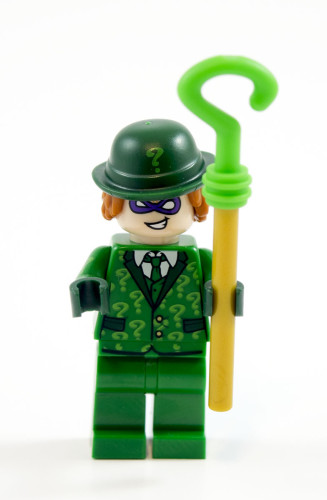 Look at this figure… since the original Darth Vader I’m not sure there’s been a figure that was such a fantastic mix of the source material and the LEGO style. This is a great stylistic mash-up of Classic ’66, Batman TAS, and just a bit of LEGO style. The suit feels like something Frank Gorshin would wear, and I justÂ love that the question marks are printed on his arms. Top it off with the staff and the question-mark topper and…Â sigh

If I was to knock it for anything, it’s that the hat is so awesome I wish the hair was a bit closer cropped. I’m not sure of a Riddler variety where the hair was so big. Not even Jim Carey’s awful turn at the character had such a shaggy look. That alt-face, though, is exactly what I imagine him looking like when I’m playing the Arkham games and generally ignoring a Riddler clue. 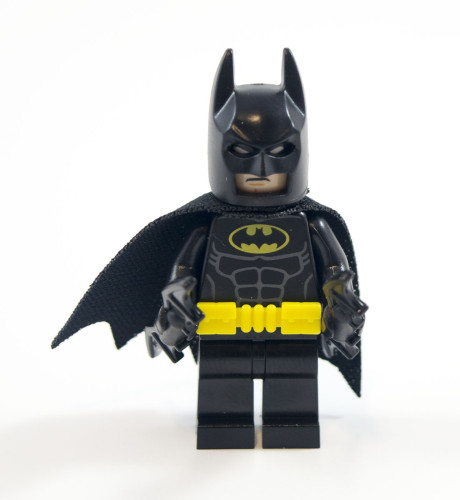 You know, is it too much to ask for a Batman character that comes with two-dozen batarangs so he can hit the switch on the first try? Or should I just add up the two-dozen Batman figures I already have? 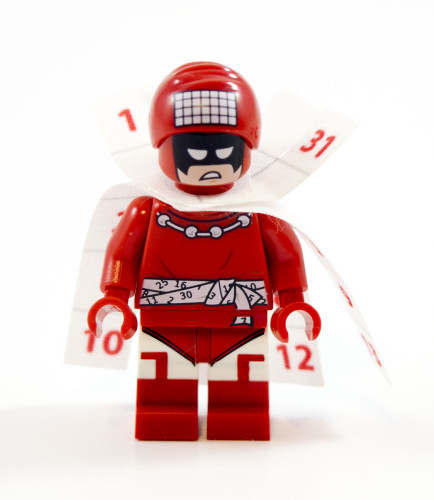 You know, I get that Calendar Man is an actual obscure Batman Villain, attacking people with the power of a two-thousandÂ year old system of arbitrarially marking the passing of time inaccurately. But I see that name and my mind goes straight to humming They Might Be Giant’s Particle Man. I know, nothing related to Calendar Man, but you could see a bonus verse in that song easily. 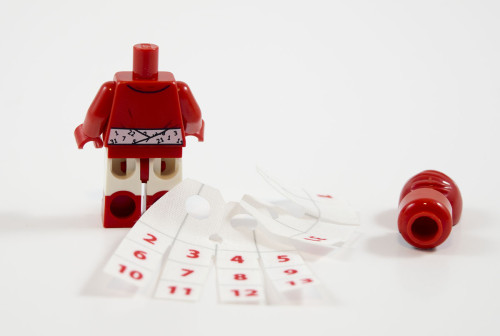 In the comics, he plans everything around major dates and holidays, which is a bad idea in today’s general social and political climate (that’s when all the extra special warnings come out). As a minifigure… he’s got a two-piece cape and a red hat. While not quite as obscure as the Kabuki Twins, he’s probably less known outside of joking articles. You just have to love the look and feel of the character.

Magpie is a character that’s probably best known for her turn in Beware the Batman, though she’s been around in some form much longer than that (like almost all of the characters we’ve seen so far… other than the Twins). This feels like a bit more mature version of the character, but certainly has some of that general look, especially the hair, but the costume is far more conservative than the BtB version we saw. 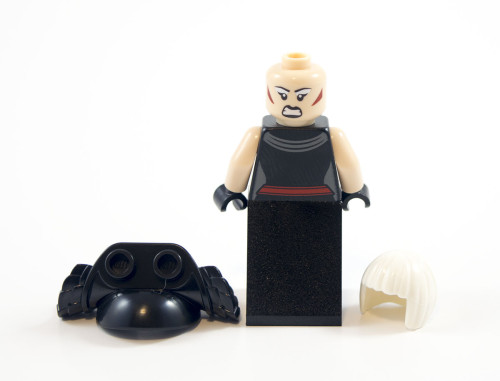 I’m not a huge fan of the armor piece of the minifigure, but I suppose it’s better than the printing handling that. The small hips printing also looks weird on the dress section, and I wish she was closer to the BtB costume and wearing pants instead. Or maybe go like some of the other ones that we’ve gotten and give her a cloth skirt over the legs instead of a slope. The slopes look okay, but pop off the minifigs too easily and rarely match up to the printing. 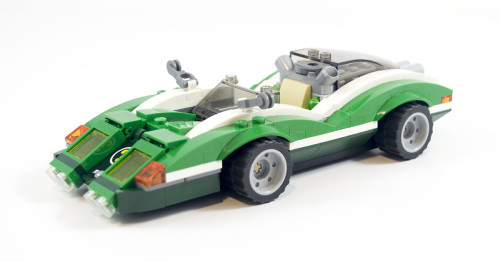 I’m not a big car guy, to be honest, but you have to love the style of a classic car. The Riddle Racer is a very 60s roadster that just oozes style and gets a very unique shape compared to pretty much every other car I’ve seen in LEGO. There is just something that’s fantastic about the flow of this model, and how complete it feels overall. It’s striking, especially when you place it next to… well, anything. 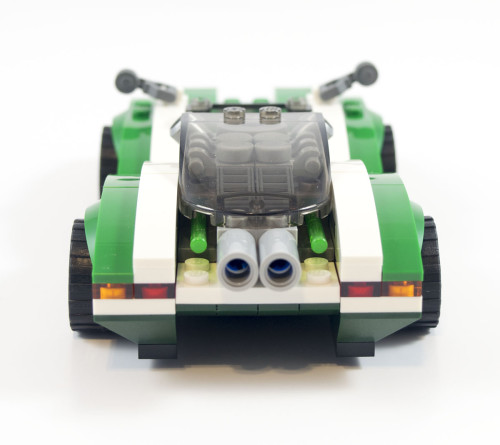 That cockpit glass over the engine is a great touch, and they get a good shape with a limited part selection. While a lot of LEGO cars suffer from only having a single driver, in a car like this it makes total sense. I kind of wish we got a bit of flat silver or chrome for some of the parts, like the cylinders and the “mirrors” (represented by rope rappel devices), but those are fairly nitpicks. I’m thinking I might get some chrome parts in the aftermarket to tweak it a bit, just it just feels so right when you play with it. 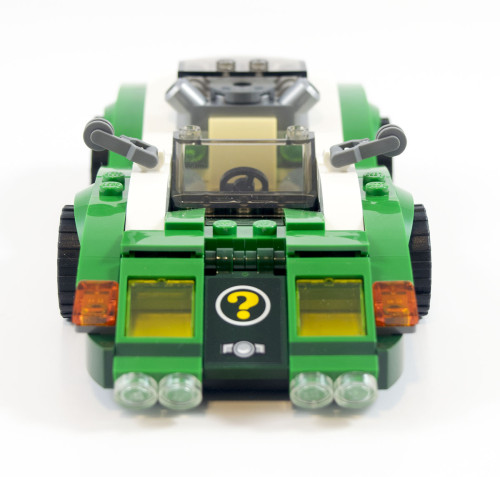 The front is a bit boxy, but that’s caused by the very unique lamps on the front that includes trans-yellow windscreens (a first), and the riddle sticker on a flag part). I like the intake look, but will admit it looks a bit strange compared to the slope look of the rest… but I still enjoy it. I do wish there was something a bit more inside it, or maybe I’m missing a play feature or something built into it.

There is a play feature in the flick fires, hidden nicely on a tilting mechanism under the engine. This is the sort of missile launcher that I really like, where they integrate into the existing build without adding a ton of needless bulk or displacing other important parts. The engine needed to be there, and so did the back bulk… this just added an axis to raise and lower and the flick-fire bricks themselves.

I still have the other sets in the same price range to review, but this might displace the Batmobile for my favorite set of the line thus far. A very solid car that looks nice and unique, three brand new minifigs, a new version of the Riddler, and another Batman to add to the pile of Batmans for the rest of the heroes to hide behind… all in a $30 package. If there was ever a set that showed you cannot judge by part count alone, this one certainly is it. Worth every dime of the cost, I’m calling this one a very easyÂ five out of five.