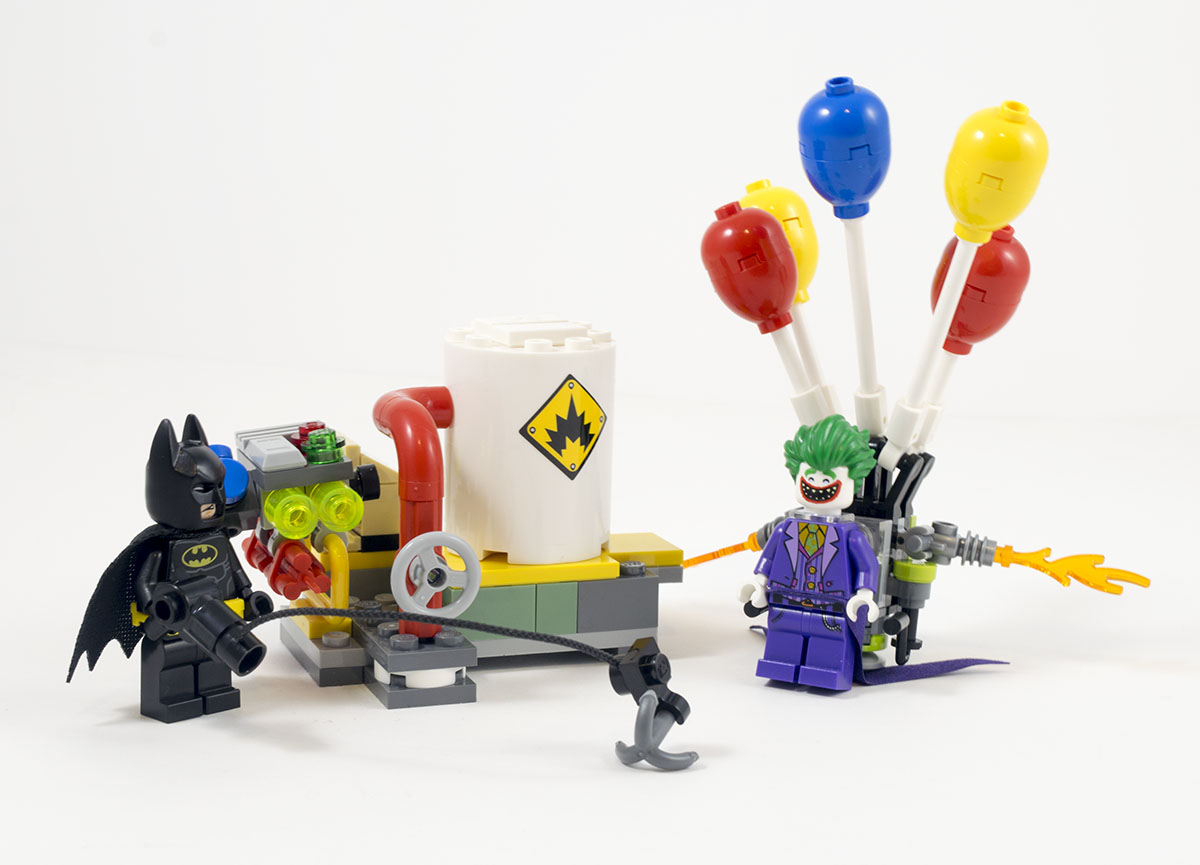 You know, every so often LEGO makes a part you just can’t help but love. Things like the original lightsaber, the batarang, and jester capsÂ are among my favorites. I’m pretty sure that the joker smile face is going to end up on that list, even if it’s a pretty specialized head. There is something wonderful in how it seems to wrap the Joker up in LEGO just perfectly, and it’s hard not to look at the sinister smile and not smile in kind.

I knew I wanted to review 70900 The Joker Balloon Escape before any of the other Batman sets. It was fantastically goofy and simple, the cheapest set to get purple-suit Joker in (this head also appears in Arkham, while the rest of the torso and the coattails show up in the Scuttler), and the set part built into different builds with 70901 Mr Freeze Ice Attack and 70910 Scarecrow Special Delivery to make the energy works. I’m sure it all ties together for some plot point in the movie (which is only a month away as I write this review), but even by itself, it works as a good little set.

This 124 piece set, featuring two minifigures, is the cheapest non-CMF set at $14.99. I miss the era of inexpensive sets that you could just use for simple builds, so it’s always nice to see something small pop up. I’m not sure there’s much else you can build out of it at first glance, but I always need balloons for city and park setups, and I’m sure builders more talented than I am can come up with some nifty stuff here. Except with yet another Batman figure… not sure how many of them you can use at this point. 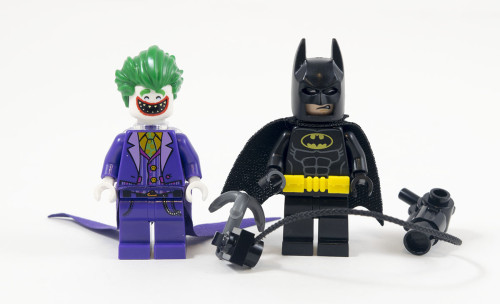 Two minifigures is a bit light (though the same number that we got in the roller), and one of them is Batman. That being said, I like that there’s an inexpensive set that gets you the good guy andÂ the bad guy for the movie (well, I’m assuming, since Joker has been featured in the trailers and no one else has had lines). We get a Joker at all of the major price points for the sets… $15, $50, $80, and $150. Of course, the problem here is that just Batman is still just the same as pretty much all the other sets, so not much new to say about him. 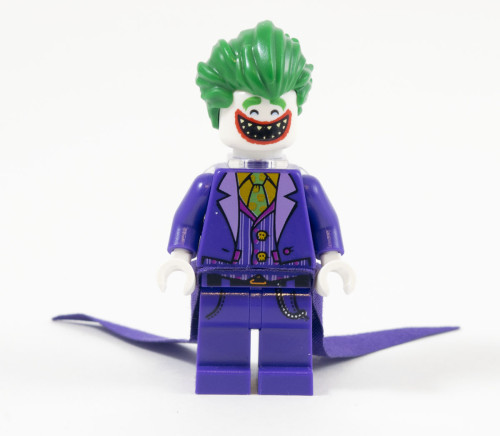 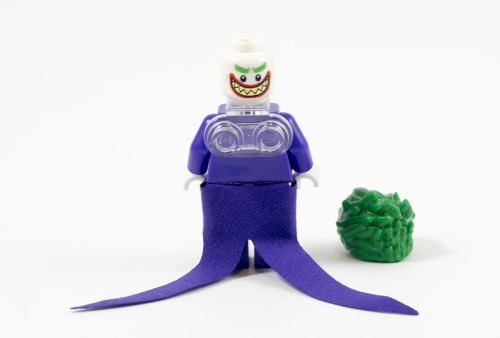 The sinister alt-face is just as disturbing as the smile face, and I really like the design for the Joker that’s in these sets. The coattails are nice, but the fact that it’s only cloth on the bottom leads to a color/texture mismatch that looks weird. I get the joke, but I’m not sure I would want to use them as my display version. I’m thinking that I’ll eventually take this head and put it on the Lowrider version of the figure. 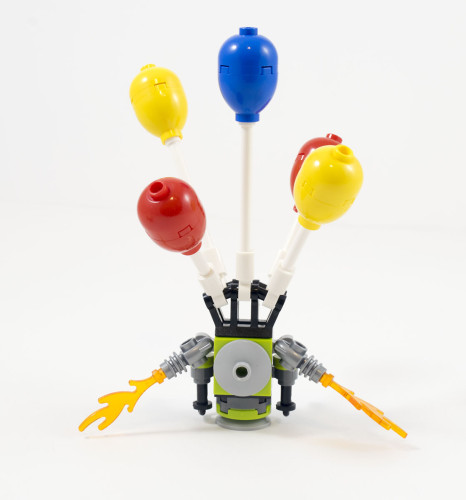 Since this is a Balloon Escape set, that’s really the focus for Joker, though. Precisely one good thing came out of the Angry Birds sets, and that’s the new bottom part for balloons, which we get five of here. I love this whole apparatus, since it feels, at once, properly Joker and also properly LEGO movie. 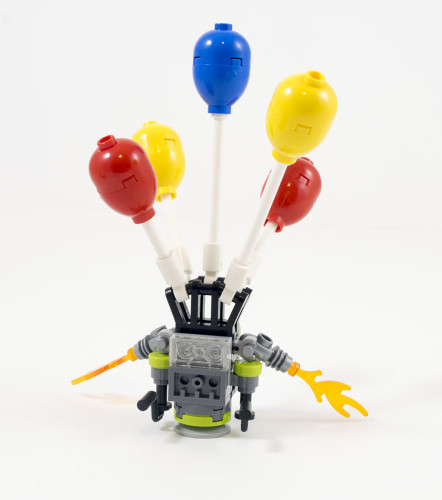 The addition of the flaming alien guns are really what change this from being nice to look at but annoying to being nice to look at and very cool. You can angle them down enough to balance the figure just sitting there without having to put him on a baseplate or bricks. Of course, I just put my joker with the balloons on top of Arkham Asylum when these went on the shelf. 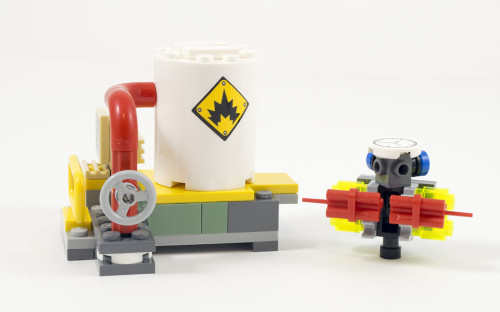 The other feature of the set is the other half of the Gotham Power Plant we got inÂ 70901 Mr. Freeze Ice Attack. I like this bit here a bit more, but not sure what power plant has a water heater full of some sort of explosive liquid. It’s a neat little visual trick, putting the pipe next to the tank, which doesn’t actually attach. 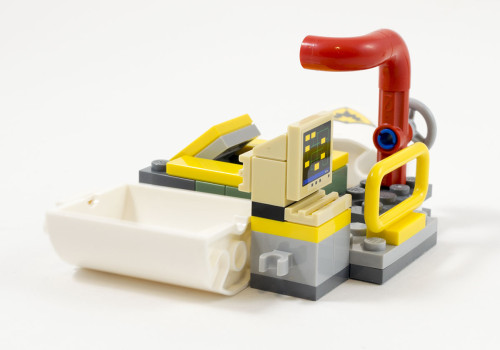 There’s a small lever in this section which “breaks” the tank. The unfortunate side-effect in this is that the tank doesn’t tend to sit squarely on the platform, since it only attaches to a stud on either side. You have to fiddle with it, and as soon as you bump this, it’s likely to move. I do love that little touch of giving us an ancient looking computer that runs the whole thing, though. I guess a lot of kids aren’t going to remember the days of beige monsters, but they are still used in a lot of government facilities, probably by workers born after said computers were made.

That’s all there really is to this set. There isn’t a bunch to it, but for a $15 set, that’s not all that unusual. The highlight really is the Joker and his balloon backpack… and we know that plays into the funniest thing we’ve seen in the trailers so far (because Superman is Batman’s greatest enemy). The power plant part feels like an afterthought, but it’s a better afterthought than we got in the Mr. Freeze set.Â There is a third element in the Scarecrow set, which is a Walmart exclusive but doesn’t really tie into this linked build… but all together those three parts are still less than a $20 set. Since they tie into three sets that come in at $55, I really wonder if we would have been better served with more stand-alone elements and a legitimate power plant set. This one is better than Mr. Freeze, but outside of Joker, kind of lacking. I’m calling it a three out of five. 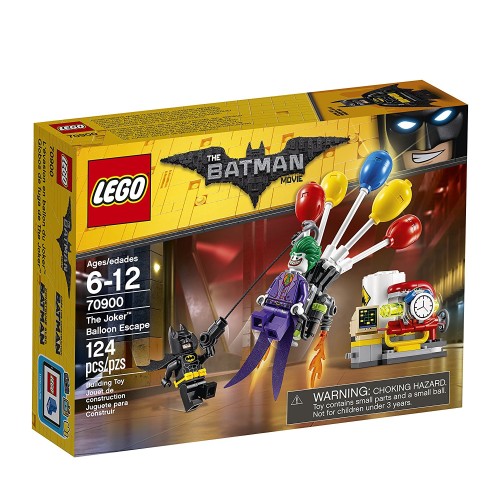